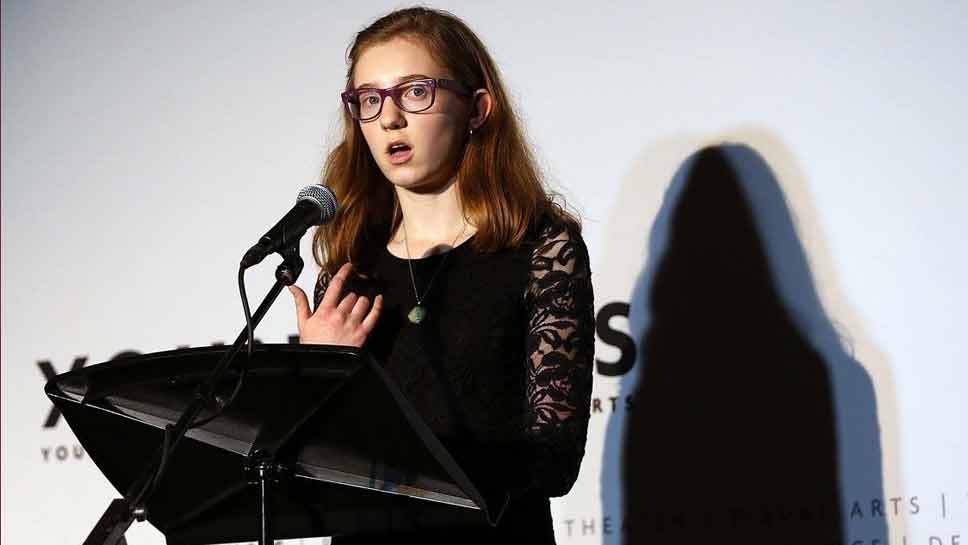 In an age where most teenagers are used to expressing themselves in 140-character tweets or with a series of emojis and gifs, Olivia Alger of Lake Bluff stands out. While other students her age think “stories” are a daily compilation of pictures and short videos on Snapchat, Alger carefully creates stories out of elegant prose from a variety of human perspectives.

The U.S. Presidential Scholars Program recognized her talent for crafting engaging fictional prose with her nomination this April as a 2017 semifinalist in their Arts category. Alger also received partial scholarship to attend Interlochen Center for the Arts for the last three years. She was a National YoungArts Finalist in 2016 for her short fiction and she’s won two Gold Keys and a slew of other recognitions from the Scholastic Art and Writing Awards over the last few years for her short stories, nonfiction essays, and poetry.

Especially today, when there are so many mediums, outlets, and apps for people to express themselves, what is it about the classical form that calls to her?

“Prose just feels more natural because I’m able to follow a really unique voice in a way that guides me through the storytelling in a way that I don’t really feel with poetry or screenplays or nonfiction,” says Alger, now a senior at Interlochen.

She even remembers her very first short story. Her first grade teacher assigned the class a one-page short story about anything they wanted. Alger laughs self-consciously when she explains the finished piece was about visiting Wisconsin Dells with a boy that she had a crush on.

“Writing, even though it was just one page for first grade, held my focus in a way that was really enthralling to me,” Alger says. “Nothing I’d ever done in my short life leading up to that point had ever captivated me like that.”

Alger’s current work is far from the wish fulfillment fiction of her six-year-old self. The stories are dedicated to getting inside the heads of characters far from her own experience. “Sleep Junk” is about a mentally ill woman living in Ohio who spends a lot of time in a particular hotel. It’s about her interactions with the people at that hotel and where those interactions lead her. “Rutabaga, Growing Up” is about a girl in high school whose older brother has just gotten out of rehab for drug abuse and is getting married. Those are the two stories that were recognized by the U.S. Presidential Scholar Program.

Other Alger works appear online. On YouTube, she reads with quiet intensity from her story “For What It’s Worth,” a scene where a child happens upon a kitchen drawer full of his friend’s mother’s used needles at a 2016 National YoungArts Week event. On the website Teenage Wasteland Review, her short story “The Kids Don’t Stand a Chance” contains lovely insights like “I don’t tell him to stop smoking, even though the smell digs into the car like nail marks into a palm.” Her prose is punchy and insightful, fun to read while it pulls you deeper into her characters’ circumstances.

“When I was younger, I did a lot with fantasy and creating new worlds, but I think that at this point in my life I’m really driven by people and their emotions in a situation,” Alger says. “I really want each piece to have a voice that’s unique to the character that is narrating. Something that I’m consistently grappling with is the ability to be emotionally reachable to any reader while still having some level of intellectual prosperity. The way to balance that is to write about people that everyone knows, but perhaps their stories haven’t been told yet. I want to write about the people who have moved me, and hopefully that will get somebody else to think about how they treat other people.”

Though she wrote the screenplay for an episode of a fellow Interlochen student’s zombie series and she’s been engaging more with poetry this past semester at school, narrative prose is still the medium that speaks to Alger best. Her next project is looking for a publisher. She’s selected nine of her pieces she wants to see as her first collection of short stories.