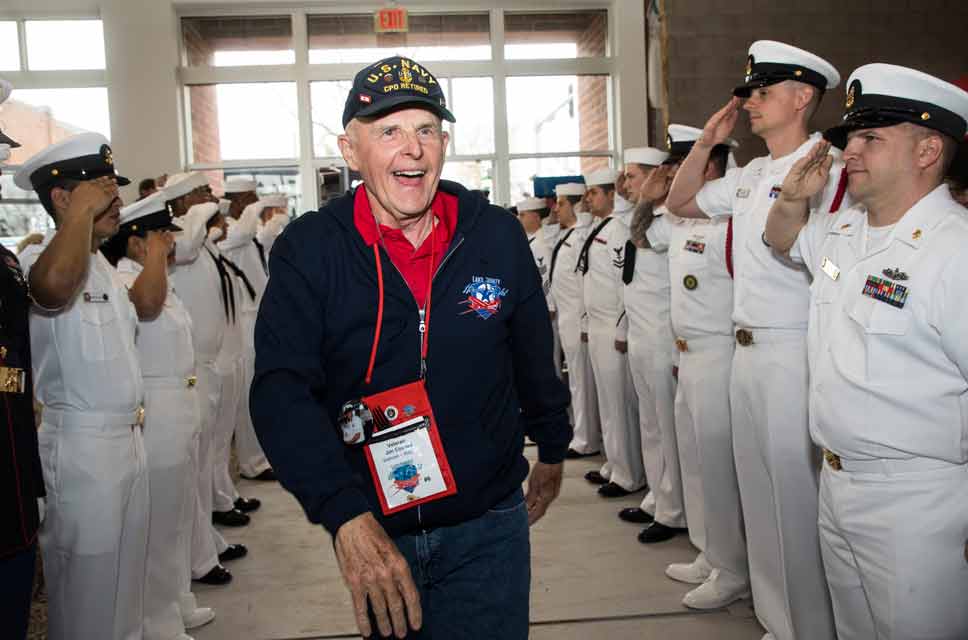 Jim Cooney, a veteran of the U.S. Navy in the Vietnam War, arrives home from the 2017 Honor Flight at Veterans Memorial Park in North Chicago. PHOTOGRAPHY BY JOEL LERNER/JWC MEDIA

The Vietnam War veteran’s words were haunting: “If you want me to describe a battle I could do that, but it’s not a pleasant thing, especially when you’re a young person and you have bullets flying all around you and rockets and grenades, and you don’t know what’s going on because we were always outnumbered by the enemy,” said Vincent Martorano, a Gurnee resident ,who served in the U.S. Navy for four years but never once saw a ship.

Martorano said his outfit in Saigon had to put up with leeches, snakes, and mosquitoes that were “the size of helicopters.”’

Martorano was one of 21 veterans who participated in the Lake County Honor Flight #9, which began with a trip to Washington, D.C. on April 29 and ended with a Welcome Home Ceremony in North Chicago on April 30. The veterans served in Vietnam, Korea and World War II.

At the Welcome Home Ceremony, Martorano said he was grateful to receive a hero’s welcome after having to lie about serving in Vietnam when he first returned home about 48 years ago.

Martorano said he was hurt by the way veterans were treated by the public when he returned home in 1969.

“I went to college in 1970 and the 18 year olds asked why I was starting school when I was 22,” Martorano told DailyNorthShore. “I never said that I was in Vietnam. I said I had a job just to make money to come to school. It wasn’t until the late 70s, early 80s when I finally started to come out of this, but the experience stays with you forever.”

More than 150 attendees gathered at the April 30 celebration to welcome the 21 veterans home from the Honor Flight where the veterans visited the WWII, Korean and Vietnam War Memorials in Washington, D.C.

Only three WWII veterans were scheduled to attend the Honor Flight. DailyNorthShore caught up with Highland Park resident Gerald Rubel on April 26, who served in the Army during WWII from January 1943 to October 1946.

“I volunteered when I was 19 and I was stationed in Hawaii,” said the 93-year-old.

Rubel was interviewed by the commanding general for medical services in the Pacific.

“We were making plans for the possible invasion of Japan and we were estimating about 750,000 casualties,” he said.

The commanding general decided the men weren’t producing medical personnel fast enough in the states, so he decided to open up a school on the Island of Oahu.

“My task was to start a school and produce medics at the rate of 200 about every four weeks,” he said. “Fortunately, the bomb was dropped and it wasn’t necessary to have all of those medics.”

Rubel learned how to teach and had classes with up to 300 students. He started as a medic, then he was commissioned as an administrative officer and was put in charge of training them. 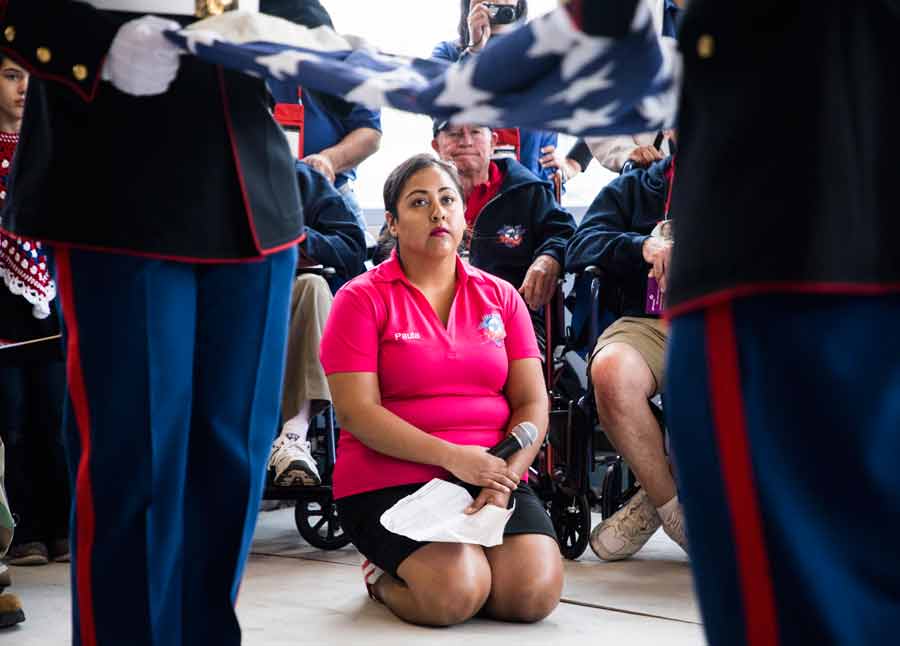 Ruble said the school was held at Schofield Barracks, which was where the classic movie, From Here to Eternity was filmed.

Unfortunately, Rubel was unable to attend the Honor Flight due to health reasons.

North Chicago Mayor Leon Rockingham Jr. was one of several speakers at the Welcome Home Ceremony.

“We are proud to be home of the Naval Station of Great Lakes in North Chicago, the only recruit training center in the United States here on our soil,” said the mayor.

He also expressed his sadness for the recent loss of Lake County Commissioner Audrey Nixon. “Audrey has been here for every Honor Flight and she would’ve been here today, but she passed away on April 26,” he said. A moment of silence was observed in her honor.

Some of the other speakers included Senator Terry Link, 30th District; U.S. Congressman Brad Schneider, 10th Congressional District, and Paula Carballido, director of Lake County Honor Flight. Carballido joined the veterans on the Honor Flight and made a special effort to connect with all of them. She served as emcee.

Evanston resident Phillip J. Wieland, 86, served in the Marines as the Korean War raged. He trained at Pensacola Flight School and then in Corpus Christie, Texas, to qualify for takeoff and landing from an aircraft carrier.

“If you don’t mind me saying so, the first experiences are what we used to call ‘underwear stainers,’’ he told DailyNorthShore. 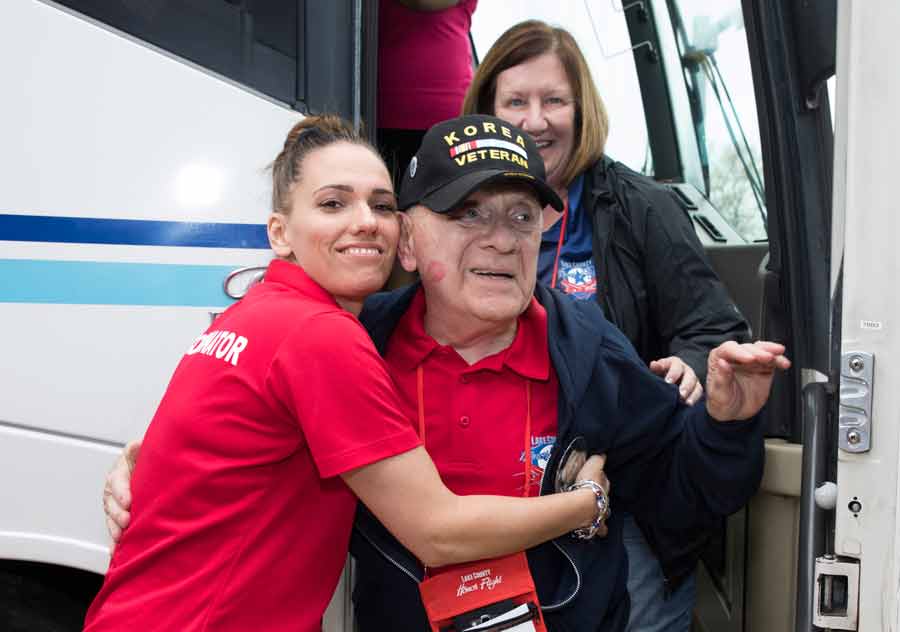 Bill Frye, a veteran of the Air Force in the Krean War, got a great greeting at the honor flight celebration.

Wieland said he was stationed in Korea, where his first assignment was the fighters’ squadron. After the war he served at the Glenview Naval Station until 1956. He married his college sweetheart, who passed away in 1975, and he later remarried.

“I want to talk about the term hero,” said Wieland at the April 30 ceremony. “The real heroes were not with us in Washington. Those are the men that we left behind on the battlefields of Korea, France and Germany and in the Pacific Islands. They’re the men that made extreme sacrifice and these men should not be forgotten. To families that are here and around the country, we’re not heroes to our wives or our children. They know the worst and the best of us, and I want to salute them and our mothers and fathers who brought us up to be who we are today and who we will be in the future.” 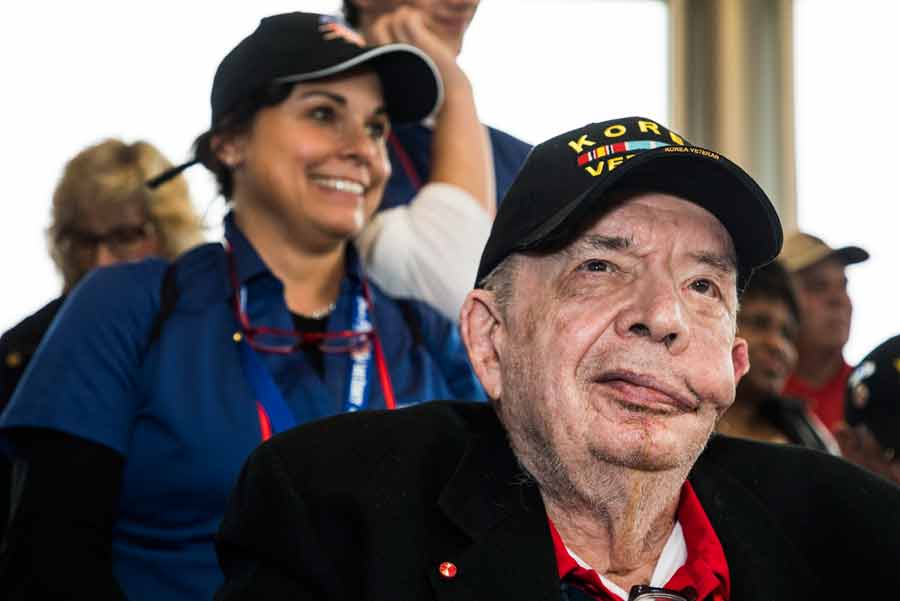 Phillip J Wieland, of Evanston, a U.S. Marine veteran who served in the Korea War, arrives home after the Honor Flight. 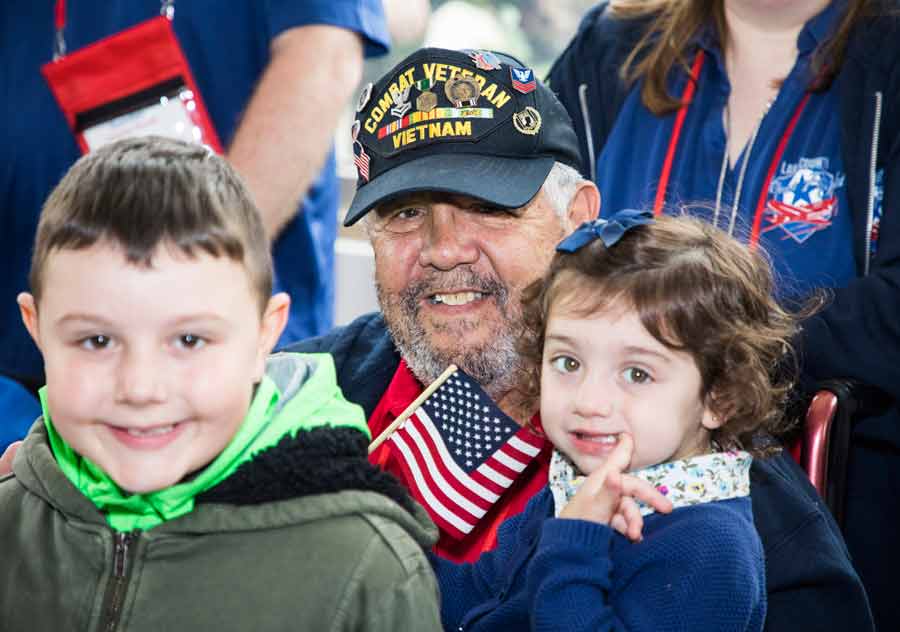 Vincent Martorano, a veteran of the Vietnam War, with his grandkidsCaden and Maddie.

Below is the complete list of Veterans who were scheduled on Lake County Honor Flight #9: