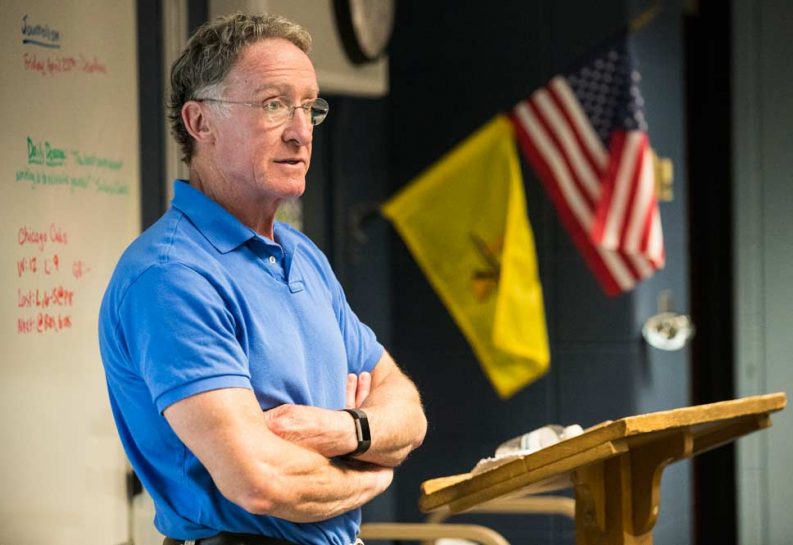 LAKE FOREST — Former Today Show correspondent Mike Leonard of Winnetka had a moment as a teenager during a Bob Dylan concert on the Ravinia Festival stage when he knew he wanted to be a creative professional.

Author Jess Walter of Spokane, Wash., got his inspiration to become a writer in his teens when he heard novelist Kirk Vonnegut talk to a group of Walter’s peers.

Whether any of the students who heard Leonard and Walter tell their stories as part of the Ragdale in Schools program April 28 at Lake Forest High School had a similar moment may not be known for a number of years, but some were inspired.

Part of Leonard’s message to the journalism class was each student will likely have a moment like he did at the Dylan concert. He counseled them to be true to themselves when that happens, and to find a filter from comments from others whether well intentioned or not.

“I liked what he said about freeing yourself,” said Elizabeth Porter, a Lake Forest junior and journalism student. “We hear so much about what to do all the time and it’s really scary to be a teen.”

Ragdale provides a space for more than 100 writers and artists in a year’s time to work on their craft for several weeks in the quiet of a former Lake Forest estate.

Once a year, Ragdale brings prominent writers or artists like Leonard and Walter to Lake Forest for a few days to participate in A Novel Affair, a fundraising effort. It took place April 29. Shawn Ward, the organization’s finance manager, said this is the first year the artists have spent time with students.

Leonard shared a lot of his personal story with the class. He said he was a D student at Loyola Academy who wanted to play college hockey and perhaps professionally. He said the only way he saw at the time to attend college and play hockey there was repeating his senior year at Loyola. Once he told a few people why he was still in town the reality got easier.

“When people saw me they asked if I was home from college,” said Leonard. He told them he was not. “That really freed me to be myself,” he added telling the class he eventually went to Providence College, played hockey and learned to write.

Before any of that happened, Leonard said, his brother asked him to join some friends at a concert at Ravinia. It was a Wednesday night. He said at that time Wednesday’s were reserved for relatively unknown performers. Dylan was known as a folk singer and not yet very popular. Dylan’s songs held a message for Leonard.

“I stood by the band shell,” said Leonard. “It was about a third full. I did not move. All the poetry I couldn’t read was clear to me. At that moment I knew I wanted to be creative and I wanted to be rewarded for it,” he added, meaning he intended earn his living creatively.

Leonard also told the class reading was hard for him because he had a learning disability. That was the reason for his D average. When he looked at a written page it was hard to see it easily because the words appeared out of focus.

“They didn’t test for (learning disabilities) then,” said Leonard. He said that was the reason hearing Dylan’s words showed him a beauty of literature he could not appreciate while trying to read.

Though Leonard knew at that moment in his teens he knew what he wanted to do, he kept it to himself.

“My parents would have said there’s no money in it,” said Leonard. Then he told the class why they should not have such fear. “Ships are safe in the harbor but that’s not what they’re built for. If you stay with it you’ll learn the winds and currents and you’ll sail away.”

Grace Scheidler, another Lake Forest junior who hopes to be a writer, said Leonard’s ship analogy was meaningful to her.

“We don’t all see things the same way,” said Scheidler.

Walter’s moment of inspiration came when he was 19. He was at a lecture delivered by Vonnegut who was 60 at the time and Walter said he got the opportunity to meet him.

“We started a correspondence,” said Walter. “I wrote to him and he wrote back,” he added referring to the inspiration and mentorship that followed.

Leonard said he did not perfect writing in class but by penning letters to a girlfriend at Marquette University every day for four years. He said he could write as he wished because he had no fear but a feeling of comfort.

“I was writing what was in my heart,” said Leonard. 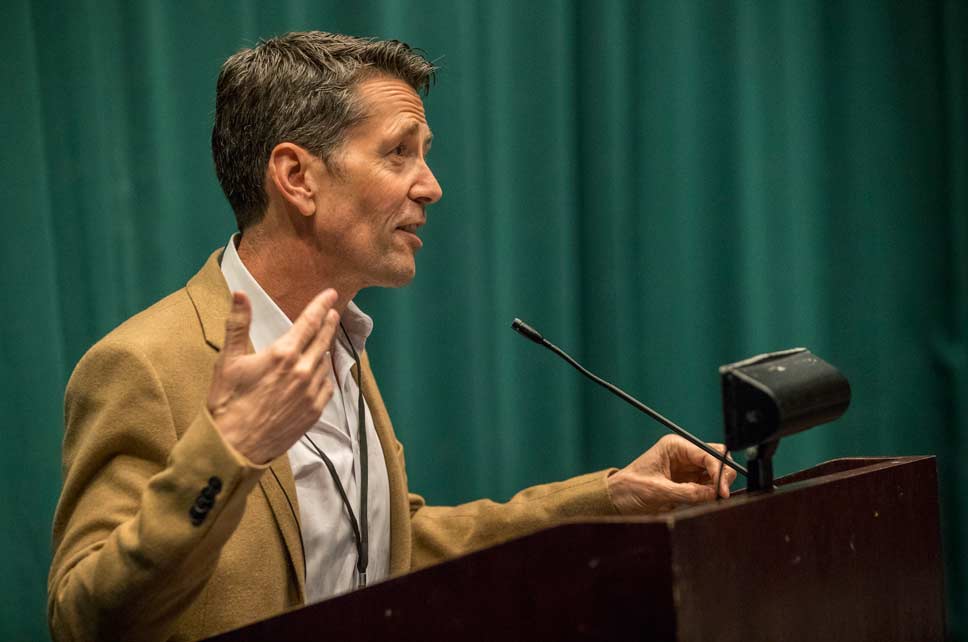