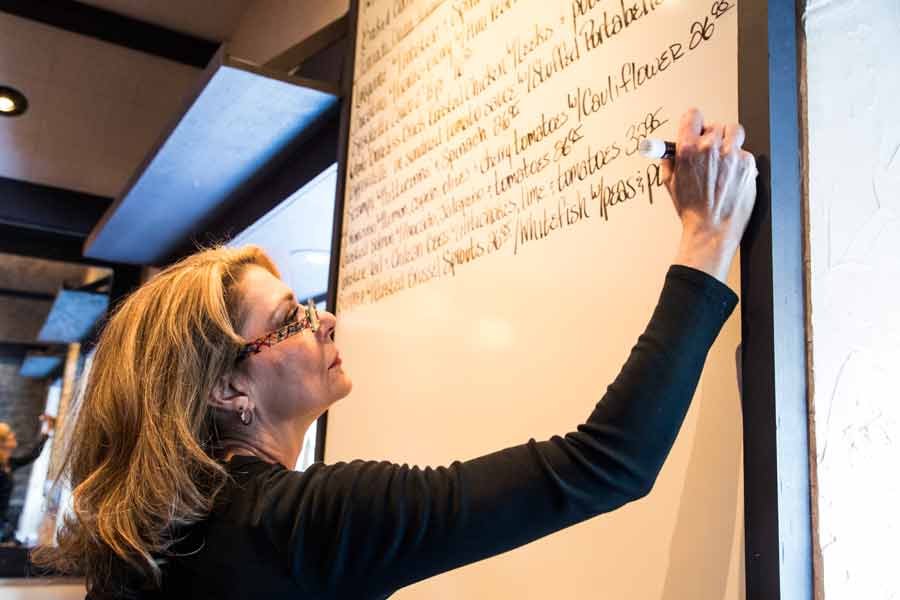 Server Mary Vaccarella fills uo the handwritten menu at the Hole in the Wall in Northbrook. PHOTOGRAPHY BY JOEL LERNER/JWC MEDIA

NORTHBROOK — Diners who walk into Francesco’s Hole in the Wall in Northbrook are not handed a menu, but if they are lucky Frank Gallo will suggest something for them to eat.

Gallo, the founder, owner and operator of the 36-year-old restaurant, takes time to visit with customers and, on a fortunate occasion, prepare special meals for them when he is not using his entrepreneurial skills to market sauces from his eatery to grocery stores around the country.

The menu is written on chalk boards around the eatery. There are staples like osso bucco, seafood diavelle, lasagna and other traditional Italian entrees appearing most of the time. There is also something new depending on the season and what Gallo finds when he goes to the market.

“We like to keep it small and intimate,” said Gallo. “That’s the way I like it. We only had eight tables in the original (in 1980). We’ve added on four times abut we still keep it small.”

Depending on the time of year one of those specials could be Branzino, an Italian sea bass with olives, capers and tomatoes. If it is summer, diners may be able to order pesce caprese with fresh imported burrata cheese.

At any time of year, the most interesting choice is letting Gallo select the dishes and do the cooking. From a family of restaurateurs, he grew up around dining establishments. It was the family business.

“It’s his creative passion,” said Lucy Gallo, Frank Gallo’s daughter who helps him run Hole in the Wall. “It’s in his blood. He does it for fun.” 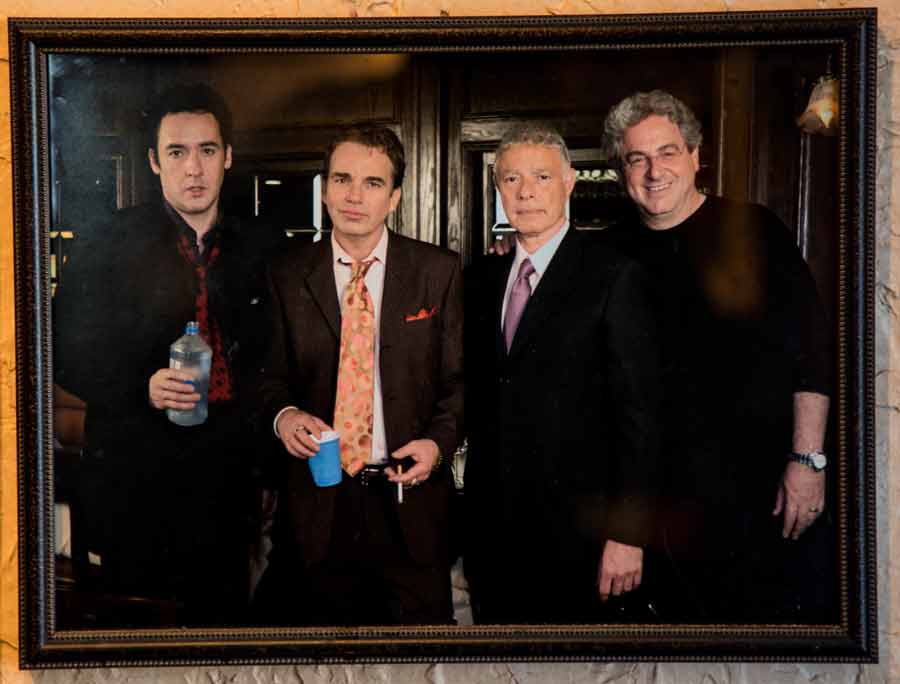 John Cusack, Billy Bob Thornton, Frank Gallo, and Harold Ramis after filming the movie Ice Harvest together. Gallo owns the Hole in the Wall in Northbrook.

Frank Gallo said his regular customers who arrive to experience his creativity come from near and far. Some are from as close as Northbrook or Highland Park. Some need a plane ride to enjoy the meal.

“I’ve had people fly in from Asia and Italy,” said Frank Gallo. 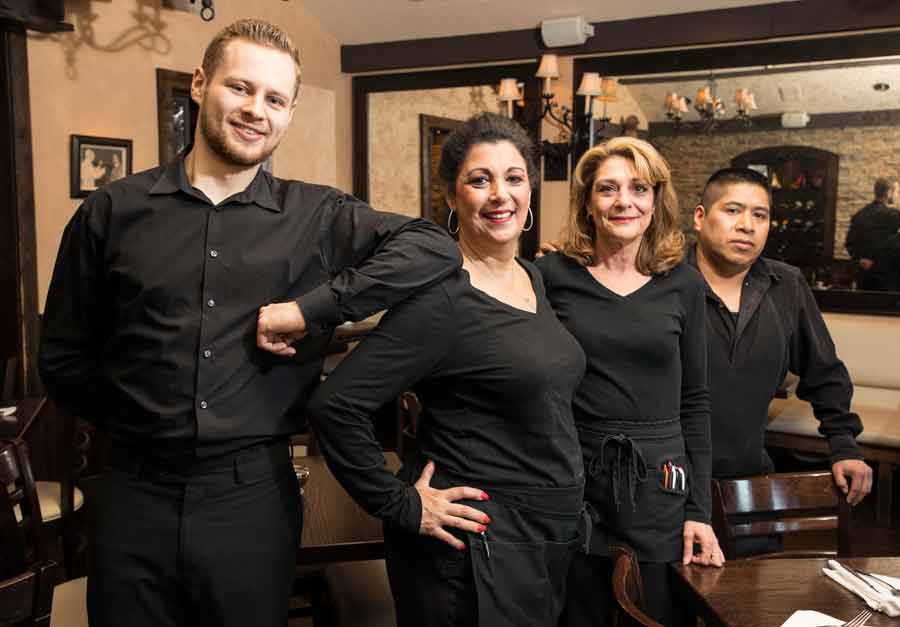 The select meal starts with two or three appetizers which can include fish, shell fish, octopus or possibly something with sea bass. Shrimp or Calamari have appeared too. Along the way flatbread may come to the table but never pizza.

Once the appetizers are done, Frank Gallo said a pasta dish is served. It could be traditional but it might be more exotic like Cacio e Pepe. The main ingredients are cheese and pepper but it has a lot of Gallo love.

Customers who like the sauces—marinara, vodka, mushroom, chicken Bolognese and Puttanesca—can find them at supermarkets around the North Shore and in 28 states.

“They are all natural,” Gallo said.

The sauce business started 20 years ago. Frank Gallo said customers kept raving and asking for the recipe. So Gallo went to talk to the owners of Sunset Foods with locations in Highland Park, Northbrook and Lake Forest. He said they got him started and now he employs a wholesaler to handle the distribution.

It is not unusual for customers who meet Gallo to think they have seen him somewhere before. The late Harold Ramis was a friend and Gallo has made brief appearances in movies like “Analyze This” and “Analyze That” with Robert De Niro.

“I’ve had come cameo film appearances,” said Gallo. “It’s only been four films but it was with Robert De Niro. I was (also) in ‘Ice Harvest’ with Billy Bob Thornton and John Cusack.”

Francesco’s Hole in the wall is located at 254 Skokie Blvd. in Northbrook. Check it out online at http://www.francescosholeinthewall.com/ or call 847-272-0155. 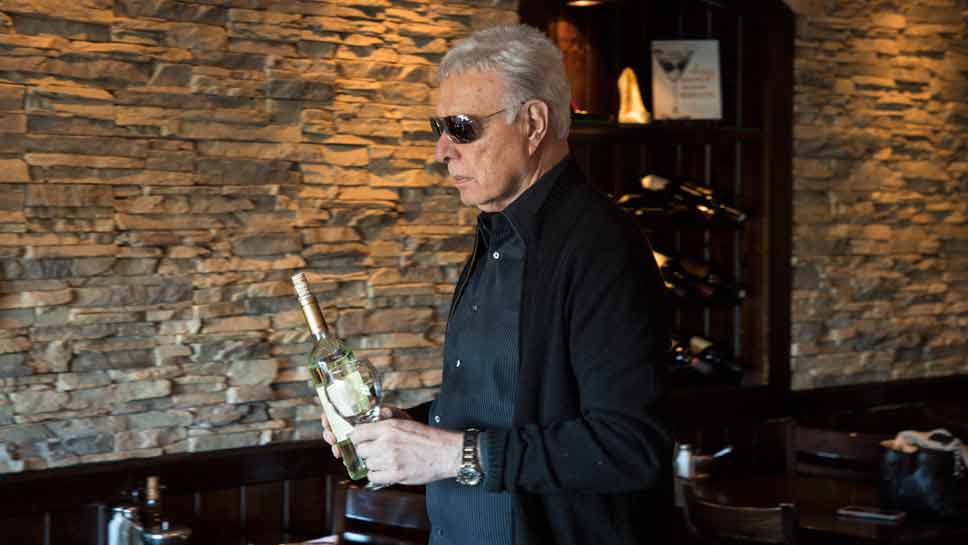 Owner Frank Gallo at the Hole in the Wall in Northbrook. 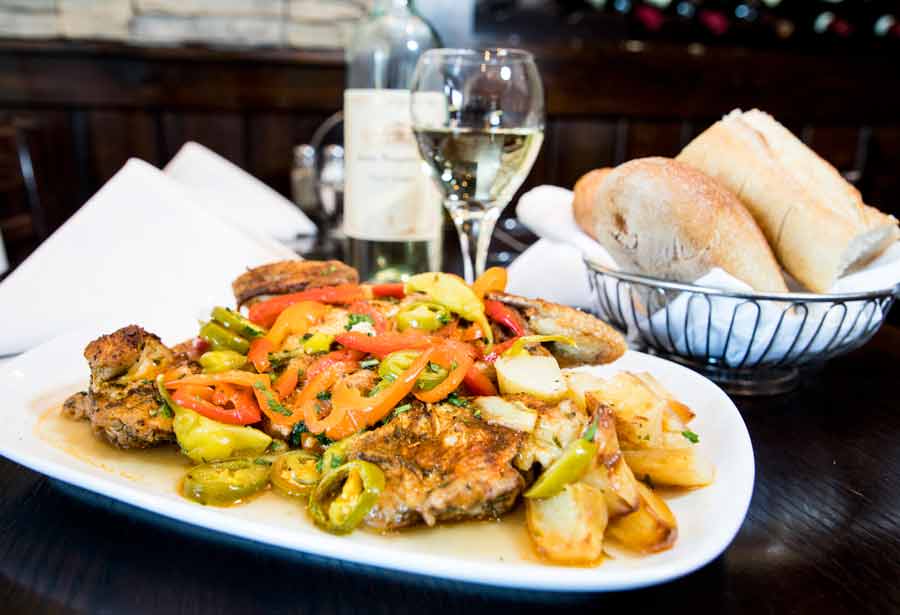 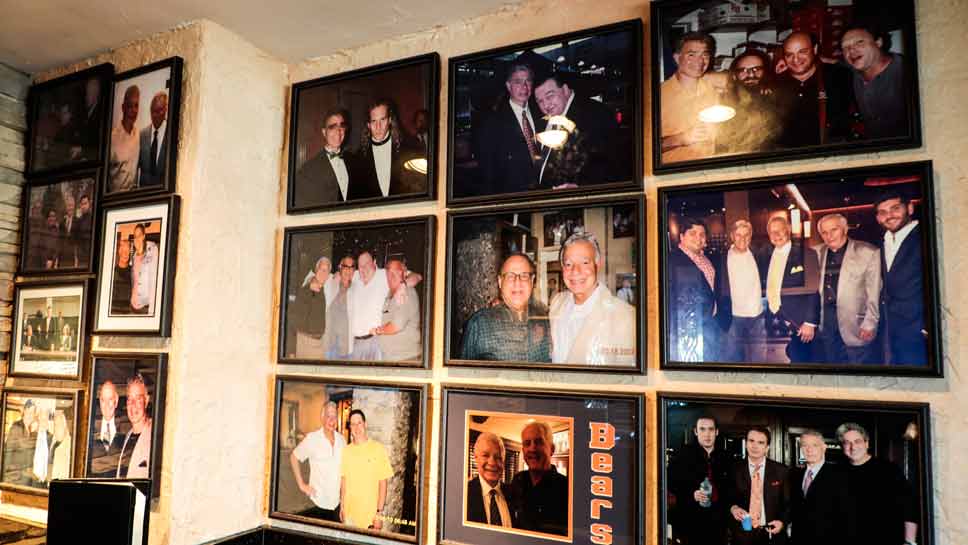