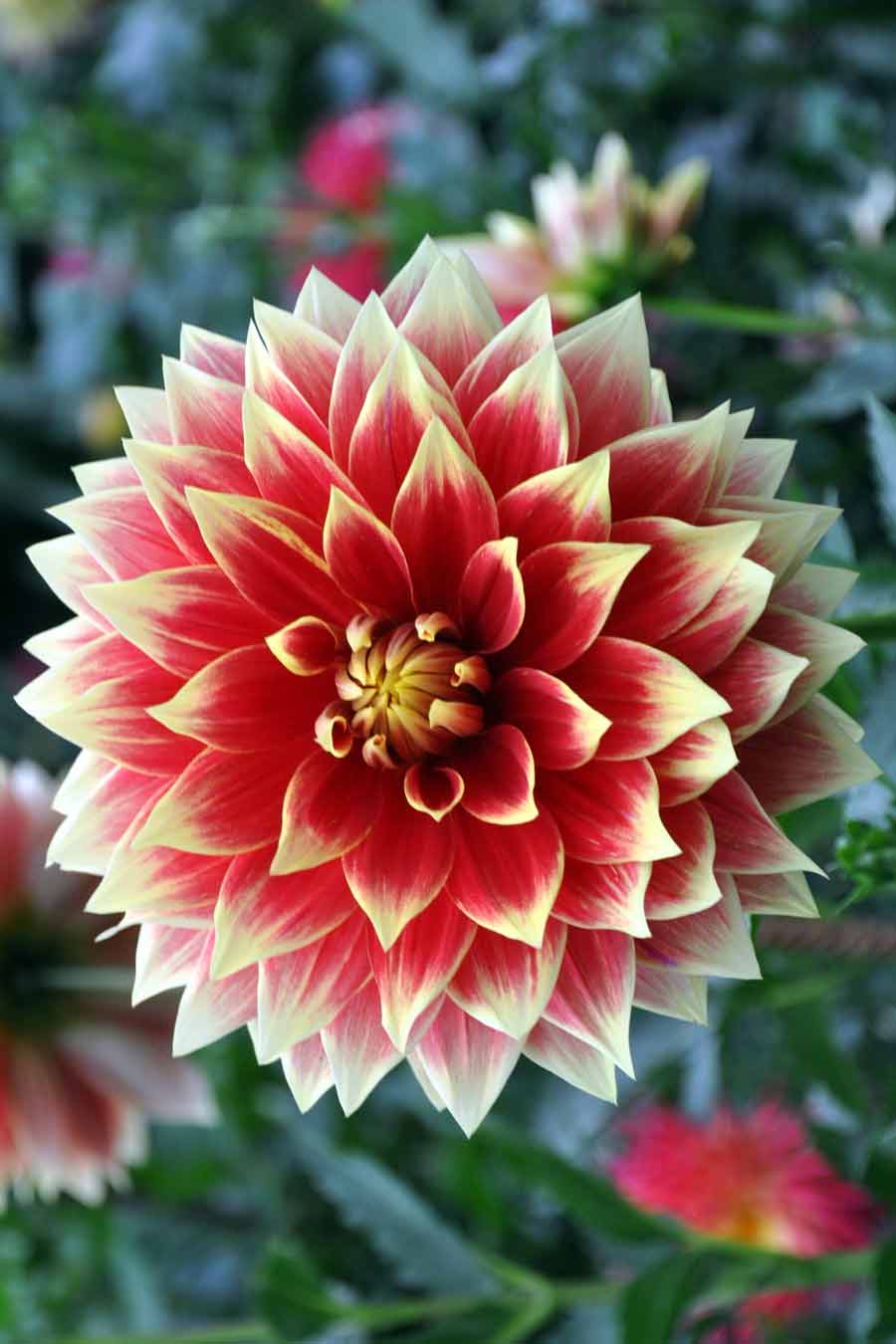 There are a couple of things you need to do before asking a dahlia gardener to talk about his favorite flowering plant: sharpen your pencil for note-taking, find a comfortable chair, and settle in for an animated conversation — one that likely will include words you normally don’t associate with flowers: words like rebar, nirvana, dinner plate, yams.

“Dahlias are indigenous to Mexico where, before the Spanish Conquest, they were grown by the Aztecs for their tubers but not for their flowers,” said George Koons, a Glencoe dahlia gardener and member of the Central States Dahlia Society (CSDS). “Just as we use other types of tubers such as potatoes and yams, the Aztecs used dahlia tubers as a dietary staple.”

Fortunately for those who love enormous flowers that can reach the size of Frisbees, the Spanish brought the plant to Europe and affection grew throughout the land, eventually spreading to the United States. Today there are 42 recognized dahlia species and approximately 57,000 varieties.

Despite the variety, dahlias are not widely known and appreciated, something the 275 members of the Central States Dahlia Society (many of whom are located in the Chicago area) would like to rectify. Many members will be at the Chicago Botanic Garden on May 6 and 7 for the group’s annual plant and tuber sale, which will feature plants in dozens of sizes, shapes, and colors that Society members propagated over the winter from last year’s dahlia crop. At last year’s sale, 1,500 plants were sold.

As of this writing, about 200 of this year’s dahlia plantings are sprouting in Koons’ Glencoe attic, which he and his wife, Anne, turned into a homegrown propagation operation a while back. (Click here to learn about how to propagate dahlias). 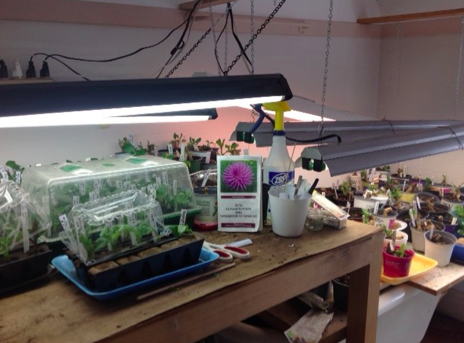 “It used to be an au pair apartment,” Koons said. “Now it’s my wife’s dahlia nursery.” He described himself as “the sort-of-assistant dahlia grower in the family. I’m the tag maker, soil mixer, and rebar stake maker.” 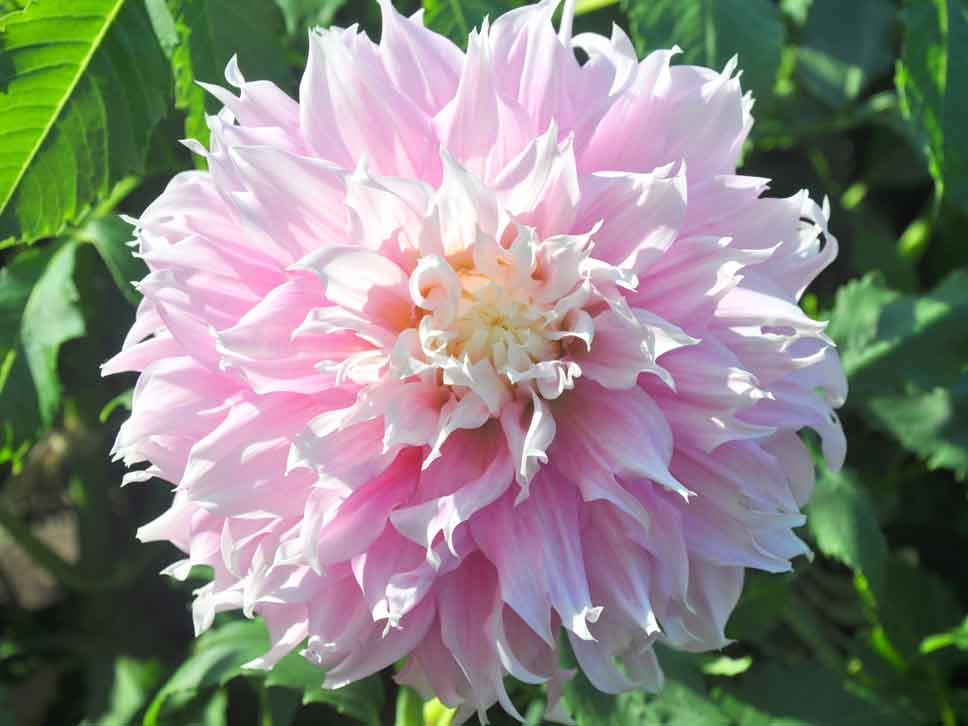 That was the first time I heard rebar mentioned in recent conversations with three local dahlia gardeners – Koons, Stan Hadley of Northfield and Dr. David Sales of Northbrook. Like the CSDS motto, all three are “basically crazy about dahlias.” And like more than half of the society’s membership, they are men.

Dr. Sales explained that he learned about dahlias from Frank Campise, a longtime CSDS member whom he described as “the Johnny dahlia seed of the area.” At the time, Dr. Sales knew nothing about dahlias.

“Frank mentioned that he was retired, and when I asked him how he kept busy, he said he gardened. As soon as I expressed interest, he became animated and said I ‘MUST grow dahlias! They are the flowers that men grow’.”

Dr. Sales, who has grown more than 130 dahlia varieties, said he hasn’t figured out why men like to grow dahlias, but he suspects it is because there is a fair amount of physical labor, including propagation, staking and planting.

“These are not delicate little flowers,” he said.

Back to rebar: Many gardeners stake dahlias with the steel tension device that is normally used in concrete and masonry construction. Staking is important because dahlias can grow to five or six feet and are prone to toppling due to the prolific number and size of their blooms.

I asked the gardeners what else they love about dahlias. 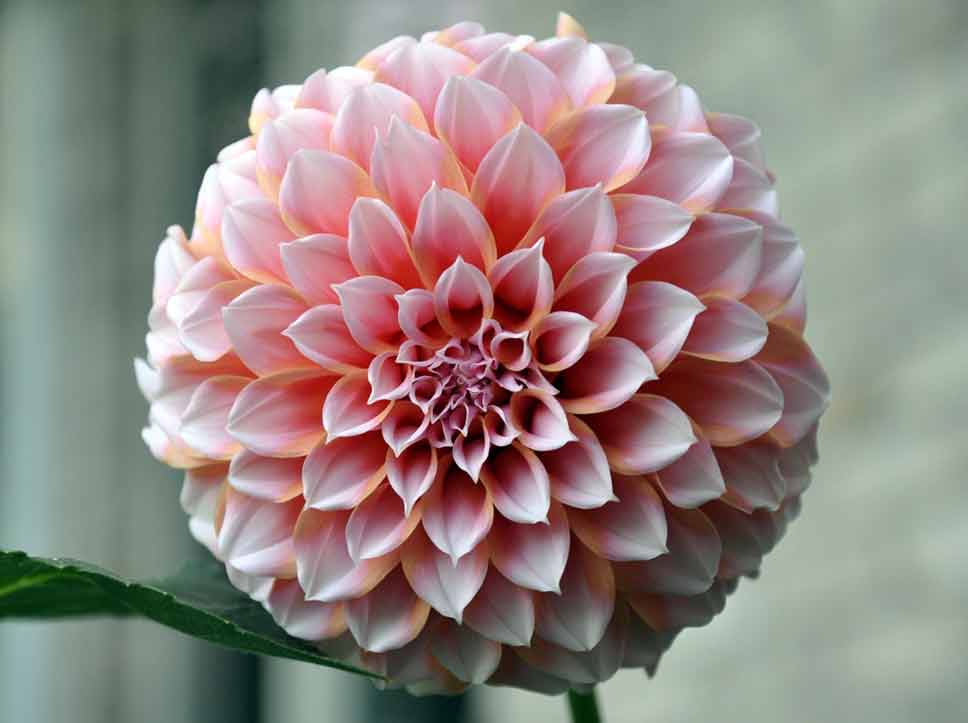 “Dahlias seem to be the easiest large flower that you can grow anywhere that provide such a variety of colors, sizes and different forms,” said Hadley, a member of CSDS for some 20 years who is currently on the Board of Directors. “Given as gifts, the cut flowers last for quite a while in a vase, and also have a relatively long blooming season.”

The gardeners also admitted to loving the “wow factor” dahlias bring to their gardens.

“People are constantly stopping and asking us about them,” said Koons. “We noticed a woman who was regularly taking photos. When we chatted with her, we learned she was sending a ‘good morning’ text to her daughter in Poland – with the dahlia included.”

Hadley recalled asking a young neighbor girl to help in the garden when the plants were in bloom.

“When we returned, she said she had brought over some of her friends to help, and they had a ‘nirvana’ feeling, spending the time amid such beauty and color,” he shared.

The dahlia sale at the Chicago Botanic Garden in Glencoe is May 6 and 7 from 10 a.m. to 4:30 p.m. It is a great opportunity to purchase dahlia varieties that will compete at the American Dahlia Society’s 51st National Dahlia Show on September 9 and 10, which this year is hosted by the CSDS and also will take place at the Botanic Garden. 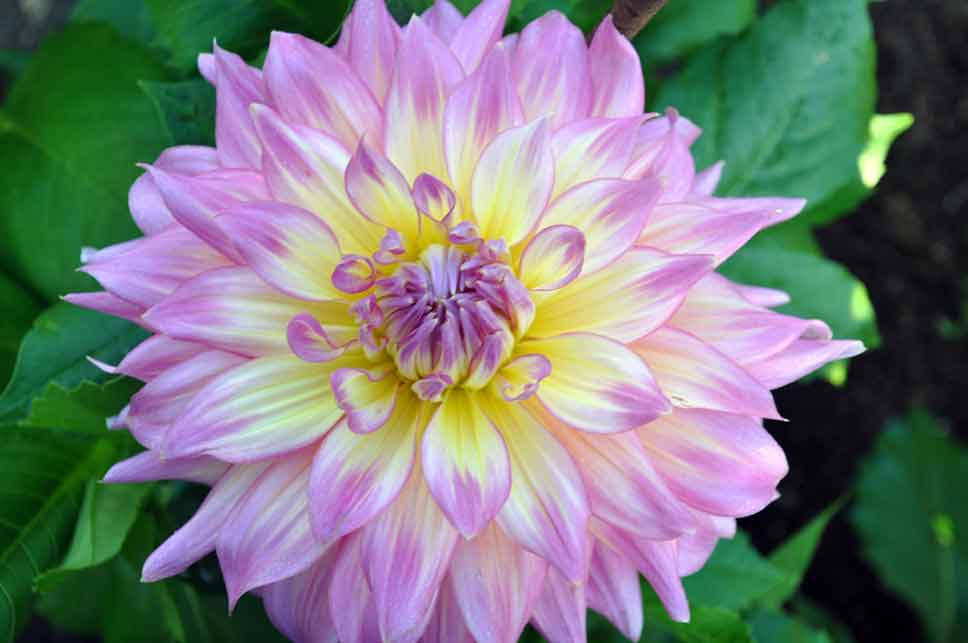