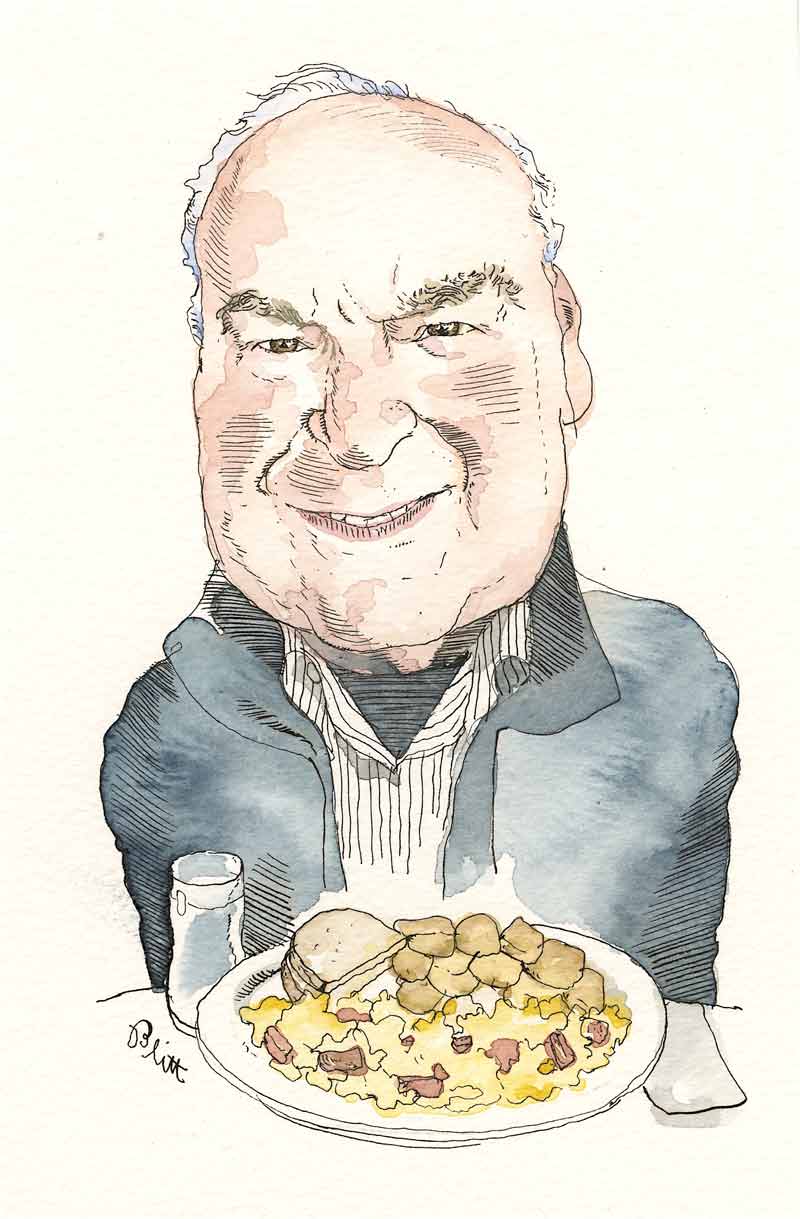 No place was a bad place for a pop CPR quiz when Denny Rosen taught and coached at Ridgewood High School in Norridge.

Picture a passionate educator toting a CPR manikin — near a bank of lockers, or in the school cafeteria, or in a lobby area — and searching for one of his PE leaders to “resuscitate” a legless, open-mouthed dummy right there on the spot.

That animated, 76-year-old man is sitting across from me today at Max and Benny’s in Northbrook. He is wearing an infectious smile underneath a weathered ball cap. The front of the mostly red cap appears to have survived decades worth of summertime sun; the back of it is a grayish mesh.

“To me, 100 percent was the only passing grade in CPR,” says Rosen, a Highland Park resident and only the third Camp Ojibwa (Eagle River, Wisconsin) director since it opened for boys in the Northwoods in 1928. “How could it not be? Do you know what teaching is all about? It’s about creating a desire to learn, and that was what made me do some of the things I did in my career as a teacher.”

Rosen will welcome hundreds of breathing, heart-pumping, communicative Camp Ojibwa alumni at the camp’s 90th Summer Celebration May 5-6. Day 1 features camp sports fun — including basketball games and table tennis rallies and box-hockey battles — at the North Shore Sports and Wellness Center in Deerfield; Day 2 kicks off at 7 p.m., at the Westin Chicago North Shore in Wheeling. Among the evening’s events is a Jubilee that will recreate some of the memorable moments from Camp Ojibwa’s Rec Hall stage.

Counselors at the very first camp welcomed 17 campers.
Counselors are preparing to greet nearly 300 campers this summer. Boys stay for either four or eight weeks. Approximately 80-85 percent of the campers (grade-schoolers to 17-year-olds) hail from the North Shore.

Rosen — who bowled and played football, golf and baseball at Sullivan High School on the West Side of Chicago — first served as a camp counselor, in 1959 (at the age of 19), before receiving the reins as director in the summer of 1986.

“Do you know why I was asked to be a counselor?” Rosen asks, after ordering scrambled eggs with salami pieces, breakfast potatoes and rye toast. “Because the head counselor [Sid Novak, formerly of Crane Tech High School in Chicago] at the time told me, ‘You’re never tired.’ Look at me … I could never dunk a basketball, but nobody could beat me when it came to desire and heart. Isn’t it always about the heart? I needed to outwork people as an athlete and be that guy you wanted to be next to in a foxhole.

“Our campers compete, and competition develops a good level of self-esteem, prepares you for life,” he adds. “But what also goes on up there is a sense of community, where boys become men and learn all about the Ojibwa Way: kindness, respect, fair play and trustworthiness. You have to be there, experience it, to feel how special Camp Ojibwa is.”

Rosen’s wife of 53 years, Sandy, serves the camp in a variety of ways each summer. Their daughter, Rachael Losoff, and son-in-law, Joel Losoff, work as administrative staff members on the campgrounds in Vilas County. The camp encompasses 75 acres alongside a mile-long shoreline.

The Rosens also have a son, David, and six grandchildren.
Denny Rosen enrolled at the University of Illinois in Champaign-Urbana as a pre-med student and graduated with a PE degree. He earned his master’s degree in PE and health education at Northwestern University.

“I remember what I had to tell my mom one day,” says Rosen, who also taught and coached at Grayslake High School from 1965-68 and later completed a stint as a dean of students at Ridgewood High School. “I told her, ‘Mom, I’m not going to be a doctor.’ I knew I’d be happy in a school setting, surrounded by kids eager to learn and grow. I ask people all the time, ‘What do you want to be when you grow up?’ It’s a wrong answer if I don’t hear, ‘Happy.’ ”

Our conversation returns to Camp Ojibwa — Rosen’s happy place. His face lights up, even under the bill of his cap. Above the bill, in cursive script, are the words, Camp Ojibwa. He takes it off and hands it to me.

“It’s an honor — it has always been an honor — for me to be the keeper of the keys to Camp Ojibwa,” says Rosen, his eyes reaching full-twinkle mode. “I continue to take that seriously. Life-changing connections are made up there every summer. Kids feel a sense of belonging as soon as they arrive.

“The camp legacy I inherited is one of inclusion.”