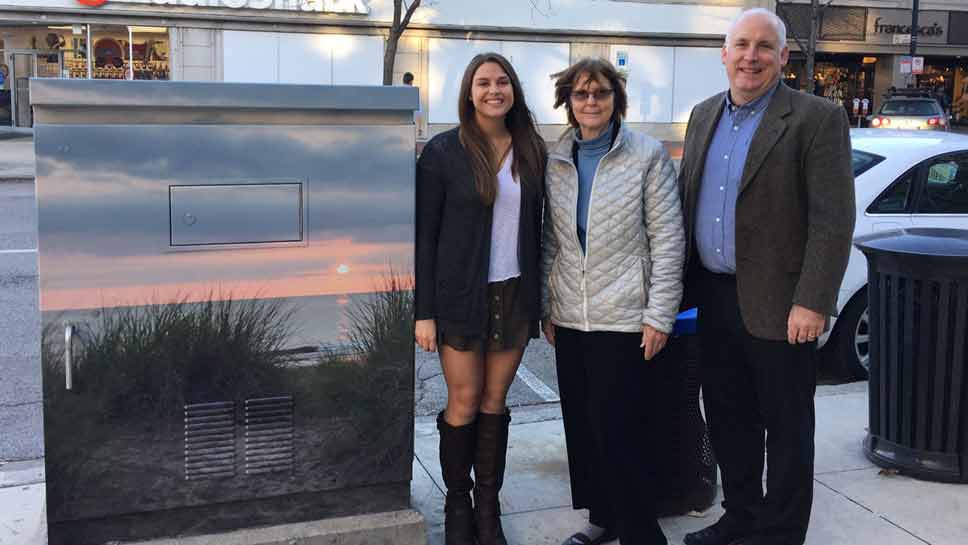 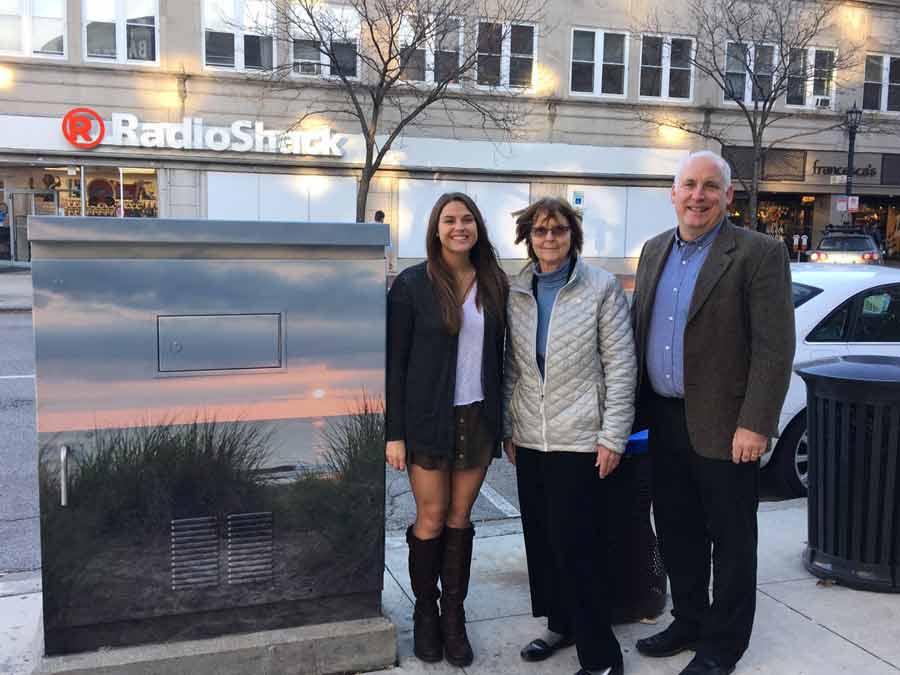 Every summer, Emily Lubin of Evanston takes on a new project.

This previous summer, she took it upon herself to launch a project of Evanston beautification by turning a civic necessity, a utility box at the corner of Sherman Avenue and Church Street, into a work of art.

“They were doing the same thing in Sun Valley, Idaho, where my family goes on vacation,” says Lubin, a senior at North Shore Country Day School (NSCDS). “That’s where I got the idea. I go running by the lakefront, and I’d always notice these ugly utility boxes along Sheridan Road. Once you notice one utility box, you start noticing them all over.”

Lubin approached the not-for-profit organization Downtown Evanston, that provides marketing and management services to the city of Evanston. She was referred to Evanston’s Cultural Arts Coordinator Jennifer Lasik who put her in front of the Evanston Arts Council for their approval. Once everyone was on board, it was time to choose the right artwork.

Lubin chose a piece called “Dunes,” which depicts a sunrise over Evanston’s Lighthouse Beach, with tall grasses and sand dunes in the foreground. She sent the photograph and the dimensions of utility box to a printer who machined the all-weather vinyl sticky wrap that now covers the utility box. It’s a very peaceful change from the hard metal box it used to be. This coming summer, she’d like to give a few more utility boxes the same treatment.

The summer between her sophomore and junior years, Lubin’s big project took her to Tanzania for three weeks. She worked with children ages 3 through 6 at the Kilimanjaro English School in the African village of Moshi. She traveled with her friend Sarah Lumberg, whose father, James, was one of the co-founders of the school. James first saw the great need for youth education in Moshi when he traveled to the area to climb Mt. Kilimanjaro.

For Lubin, the trip was an eye opening experience.

“It made me take a step back,” Lubin says. “You could tell these people were living in poverty, but despite that, they were so warm and welcoming. We would walk to the school every day and the kids would run out and grab our hands and want to walk with us. They were just so excited that we were there. We were so welcomed into their community.”

It isn’t the first time Lubin’s volunteered with young students. Through an experiential learning campaign at NSCDS called Interim Week, she volunteered at the St. Vincent de Paul Center daycare in Chicago working with 5 and 6 year olds.

“The NSCDS motto is ‘Live and Serve,’” Lubin says. “I’ve gotten so many opportunities to have these service experiences. It’s really easy for us to get involved—have a bake sale for an organization we want to help, get the community involved in different types of service.”

Lubin stays plenty busy during the school year, too. Freshman through junior year she served as class president on student council, she’s traveled the nation and internationally to conferences for Model United Nations, and she’s been the captain of the NSCDS girls’ basketball team her junior and senior years.

“I love the competition, but then I also love the team, just having a group of girls that I can hang out with every day,” Lubin says. “I love the camaraderie.”