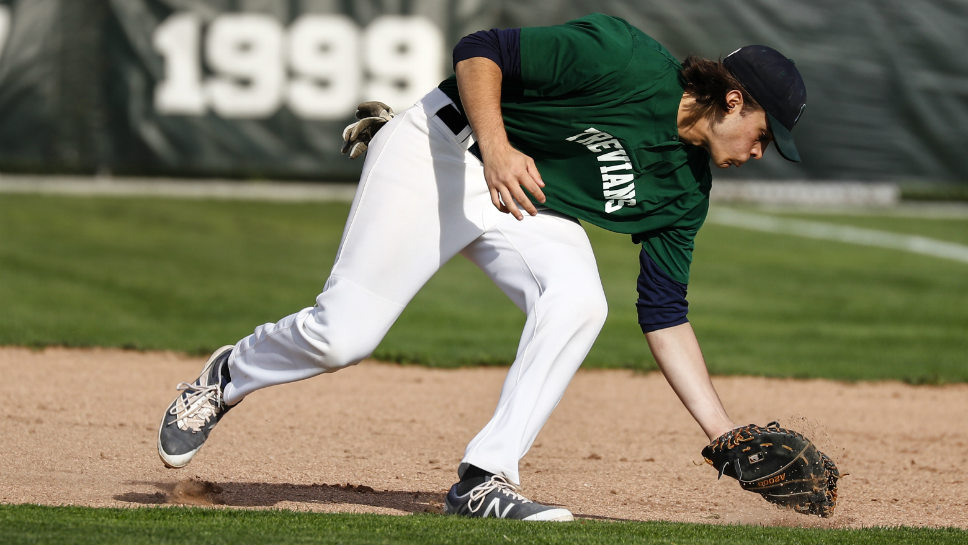 Anthony Calarco makes a play at first base during New Trier’s 7-6 win over Evanston on April 18. PHOTOGRAPHY BY JOEL LERNER

And it’s not located at that state of the art training facility in Yaphank, New York.

Or, in that brilliant poem by Robert Arthur Miller.

Pitched baseballs were not safe around Calarco on April 20 in New Trier’s remarkable — and unthinkable — 18-11 come-from-behind victory over archrival Evanston.

In fact, the 6-foot-3, 190-pound junior was downright indignant to any stitched ball that dared to cross the plate. Calarco played smash-mouth baseball.

The switch-hitting first baseman came up with quite the onslaught. He hit to all fields and went 4-for-4 (all doubles) with three RBIs.

As daylight disappeared, Calarco had to a face a different kind of onslaught. A couple of local sportswriters searched him out.

Enquiring minds wanted to get to know No. 24, who already has been heralded by The Prep Baseball Report (ranked the 25th best player in the state in the class of 2018).

Calarco, humble and respectful with an intense drive for the game of baseball, can be pretty captivating — charismatic, if you will — when he takes the field. He couldn’t have asked for a better time — or place — to have a major breakout game.

Miller Park is his future home. He made a verbal commitment to the Big Ten school last year.

“I was excited all day at school to play this game. Just looking forward to playing [on this field],” said Calarco, during a postgame interview in the parking lot.

Calarco, a front-of-the-class talent, has a pretty interesting backstory.

Check out this: His high school coach is Mike Napoleon, who currently has won 822 career games, is the same Mike Napoleon who coached his dad, Mike Calarco.

Mike Calarco was a shortstop for Napoleon, when Napoleon headed up the program at Notre Dame High School (1985-90) in Niles. Napoleon went on to New Trier. Mike Calarco went on to play Division I baseball at the University of Illinois-Chicago and Northeastern. He also played minor league baseball in the Miami Marlins’ farm system.

And, there’s this: Calarco will join forces with another Napoleon at Northwestern. Napoleon’s son, Dusty, is an assistant coach for the Wildcats.

But let’s not speed up time. Before he returns to Baseball Heaven on a more permanent basis, Calarco figures to have many more at-bats with the Trevians.

His four doubles against Evanston — all from the left side — were impressive on a couple of levels. In the top of second inning, hitting No. 6 in the batting order, Calarco ripped a shot down the right-field line. In the fourth inning, he smacked a towering drive the other way.

His most significant swing came in the fifth inning, when he belted a two-run double to the opposite field to put the Trevians 8-7.

And the best part?

“My first three doubles were off curves,” said Calarco, who plays his club baseball with the Chicago White Sox Academy. “I had been struggling to hit the curve earlier in the season.

“But now that I’ve seen more of them, I’m able to drive them,” he added.

Like several of his teammates, including Matt Kann, Kevin Donahue, Dylan Horvitz and Cam Redding, Calarco especially has become a difficult out in the past several games.

In NT’s first meeting against Evanston on April 18 at Duke Childs Field, Calarco went 2-for-4 in a 7-6 victory. Then, he had a double and two walks in his team’s 8-0 victory over host Deerfield on April 19.

“Anthony just continues to get better with every start,” said Napoleon. “He didn’t play a lick last year (due to a right arm injury).

“So, we’ve been just trying to get him acclimated to the speed of the game,” the NT coach added.

“Last year, he couldn’t play, but he was at every practice and every game,” said the Trevians coach. “He works really hard. And he thinks baseball.”

Calarco, a pitcher, catcher and third baseman for most of his young baseball career, is not only adjusting to the varsity game, but he also has been transitioning to a new position.

“I’ve found out that there’s a lot more to playing first base than just running to the bag and catching the ball,” said Calarco, who also has a highly regarded brother (Alex, an eighth-grader) coming up the ranks. “I’m learning more about the position every day. I’m getting better at it. I’m getting a better feel for the position.”

In the fourth inning against Evanston, Calarco dug out an errant throw. Had he not come up with it, the toss would have been ruled an error.

Going down 1-2-3 was not a common occurrence in this wild Central Suburban League showdown. Evanston opened the game with a two-run first inning and led 7-2 after three innings.

But New Trier, which also overcame a five-run deficit on April 17, didn’t fold. The Trevians came up with two runs in the fourth, four in the fifth and 10 in the seventh.

“What an awesome experience this game was,” said Calarco. “Evanston is our biggest rival. Both benches were into it. I felt like every play, every pitch was heightened [in its intensity].”

Player of the Game: Calarco

Notable: New Trier improved to 12-3 overall and 5-0 in CSL. … In NT’s 7-6 win over Evanston on April 18 at Duke Childs Field, Sean Douaire had the game-winning hit. Dylan Horvitz had a two-run home run. Jack Falk got the save.