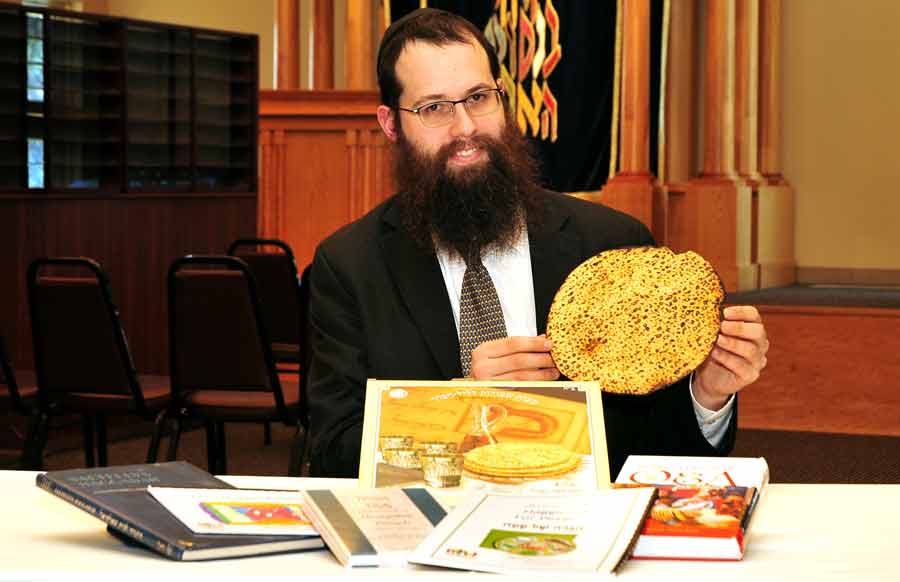 The how-to calls start coming in weeks before Passover, from young families, grandparents, students. They want to know about centuries-old traditions, as well as how modernize them.

“Younger families are now starting to do this on their own, trying to do what their parents or grandparents did. And so when people are new to it, by age or circumstance, they want to know how to do it right,” said Rabbi Meir Moscowitz of Lubavitch Chabad of Northbrook. Passover, or Pesach in Hebrew, commemorates the Jews’ emancipation from slavery in Egypt 3,000 years ago. It takes place from the evening of April 10 through April 18 with the first two nights celebrated by Seder dinners.

“They also want to know what’s new this year,” he said, noting a call he received from a grandfather wanting to spice things up for his grandchildren and other guests coming to his Seder. In addition to fielding phone calls, Chabad’s www.Passover101.com offers tips and recipes.

Not only are adults prepping for Pesach, but Hebrew school students learn about it and often create their own ceremonial seder plate and Haggadah, the text used for the Passover seder, or order, which tells the story of Passover, has all the blessings, and includes the 15 steps of the seder. The 15 steps are practical, such as a ritual washing of the hands, eating matzah, the unleavened bread, and eating marror, or bitter herbs, and reciting the Four Questions. But there’s also a spiritual meaning.

“The theme of Pesach is not just to remember what happened 3,000-plus years ago, but to remember our spiritual liberation,” Moscowitz explained. “Everyone has their own limitations or confinement in realizing their own spiritual potential. Passover is going out of Egypt – breaking through those boundaries – and so we want to go out of Egypt ourselves.

“The main action that we do is eat the flat, unleavened matzah. Bread represents ‘haughtiness,’ or being full of air, but matzah does not have that. Matzah, in the spiritual sense, represents the selflessness and humility that we should be mindful of,” he continued. “Sometimes we become our own impediment to our own success, so if we can put that ego to the side, we can tap into our own potential.”

Although available all year long at grocery stores, matzah is what first comes to mind for so many identifying the holiday. When the Jews were slaves in Egypt and fled, the humble matzah was prepared in haste as they crossed the Sinai Desert. In order to be Pesadich, or especially kosher-for-Passover, the process must take no more than 18 minutes from the time the water hits the flour until the time it comes out of the oven – that’s the amount of time that it takes bread to rise, according to the Talmud.

Extra-extra-special matzah and other kosher-for-Passover foods

In 1957, the revered Lubavitcher Rebbe Menachen Mendel Schneerson launched a campaign to encourage all to have an extra-special, round shmurah matzah, or “watched matzah,” at least for the seder because it is handmade as it was three millennia earlier. Unlike commonly found square matzah which can be mass produced in sheets and cut into squares, the shmura matzah is watched from the moment the wheat is harvested – only on a clear, dry day – and then begins as a ball of water-and-flour-only dough and rolled by hand. The finished product has more natural, heavier, slightly burnt flavor than the mass-produced variety. Today, every Lubavitch Chabad distributes shmurah matzah for free. Moscowitz  congregation distributes about 1,000 packages to all types of Jewish people who live and work in the Northbrook area.

“It’s something we do to share the mitzvah of the holiday and extend the reach of the Chabad,” says Joyce Holman, of Northbrook and a 20-year food service marketing expert, whose family shares shmura with neighbors, old friends, other families.

When it comes to shopping at the supermarket for Pesadich goods, they explain, it’s important to look only in the Passover section and ensure the package says “Kosher for Passover” and or has a special “P” next to the usual kosher certification.

“If you are buying kosher-for-Passover-labeled product,” Holman advises, “it will not be made with soybean oil or corn oil, and that is one important key.” Flour-based foods which have risen or leavened – most cakes, cookies, pastas and breads –are banished for the week. It is suggested to leave legumes out, too. Still, many products are made with alternative ingredients, like canola oil or cane sugar.

“The interesting thing that I find when I am shopping is that if there’s a shortage in product,” like brisket some years ago, and margarine in more recent past, she says, “is that you have boutique manufacturers come up with alternative products. And, there’s a lot of trading amongst friends – there’s a chocolate chip available at one store that my friend went to in Rogers Park and I need that, but I find something else here around Northbrook that she can’t find. That brings my friends and I together, too.”

Most kosher wines and grape juices and other kosher products are kosher-for-Passover all year long, the rabbi says, but some are not, hence the necessity to look for the special marking. Some brands make an extra effort: Coca-Cola has a seasonal product not made with corn syrup, and it has a yellow cap to help identify it.

Preparing your place for Pesach

“Rabbi Meir gave me the most important piece of advice for Pesach – it’s what he told his wife, who told my husband, who told me,” she shares. “Pesach is not ‘Spring Cleaning.’ It’s making sure you’ve isolated and sold the chametz.”

Chametz is any non-kosher-for-Passover foods or ingredients. Many families will simply isolate them in a box in the basement, or seal off their kitchen pantry door. An old tradition is to sell it to a non-Jewish neighbor, and then buy it back after the holiday. Chabad Northbrook even offers an online service for that.

“I thought cleaning for Pesach meant I had to clean the whole house, but it doesn’t. Some families might go as far as checking under sofa cushions for crumbs, but it’s a bit extreme,” admits Holman. It’s mainly about the kitchen.
“You could switch over to separate dishes,” Moscowitz suggests, or, if using year-round cookware, dishware and flatware, “thoroughly clean it from any actual leavened products, and once it’s cleaned, you can then ‘kosher them for Passover’ by immersing them in boiling water with a stone in the pot.” Ovens and stoves should be heated to the highest temperature for at least an hour, microwave ovens, sinks and refrigerators should be well cleaned too. Passover101.com offers easy-to-follow how-to tips.

Like using generations-old chicken soup, brisket, charoset, tzimmis, or gefilte fish recipes, many families use heirloom sets of dishes and silverware only for Passover. Some try new recipes with twists on classics, and some use disposable dishware and utensils. Moscowitz says it’s OK, noting that there are always new products and ways to keep up with the times while maintaining the religious practices and traditions.

“One of the takeaways I also get is that Passover is about ‘clean eating, getting away from processed foods,” offers Holman. “The high point of my Pesach is that I bake, and bring my baked goods to work.” She shares with others, Jewish or not, and they see that the Pesadich food “was good enough to eat,” even thought it was kosher-for-Passover.

“Even though the story of Passover is the remembrance of a horrible time, it’s a joy of coming together,” she says.
“A lot of people have memories of their grandparents making everything by scratch,” the rabbi says. “Making gefilte fish, grinding the fish, adding the ingredients, is part of the fun,” he adds, noting the community experience and reliving and creating new memories. “As parents, it’s great to get the children involved. They can help clean,” he suggests. “The more they help prepare, the more they understand. As we say during the seder, ‘teach your children.’”

Moscowitz brings it full circle, an arrival for the family and self as the Jews did when they reached the Holy Land: “There’s a big satisfaction after all the effort when you come to the seder, to say, ‘I’ve made it! I’ve got here!’ When you focus on the meaning of the spiritual side of the holiday, it becomes more freilach, happy, more positive, and an accomplishment, a liberation, and meaningful to the self.”