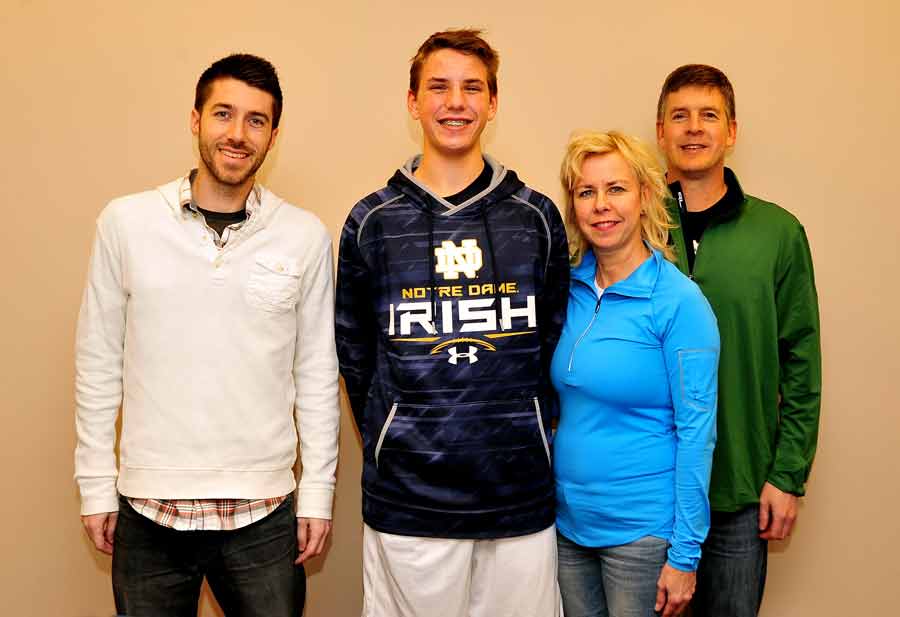 GLENVEIW – Justin Leszynski, an eighth-grader at Glenview’s William J. Attea Middle School and clutch player on soccer, basketball and baseball teams, matches brain with brawn: He recently earned a spot at the Illinois state final National Geographic Bee to be held March 31 at Illinois State University. It’s his second year in a row.

“Everyone’s sitting in desks in a classroom and they go down the rows. The first few rounds are about states, for example, ‘in which state is the Chesapeake Bay?’ or ‘In which state are the Everglades,’” explains Leszynski. It gets more challenging and themes change for each of seven rounds, from science, to natural or manmade landmarks, to sports, and from states to nations or continents. When asked on what river is the water treatment plant in Baton Rouge, La., he won the Attea competition, answering, “The Mississippi River.”

After the Attea competition against 290 others, Leszynski took a written test to qualify as one of 100 students out of thousands hoping to compete in the state bee. If he’s one of the top two there, he’ll advance to the national bee in Washington, D.C.

Sports were the impetus for Justin’s geography passion.

Taller and more built than an average eight-grader, he’s been a soccer player – a striker – “since forever,” said his mother, Amy Leszynski. Justin’s been a clutch player sinking free throws in his school team’s second-year-in-a-row championship basketball game, throwing strikes and hitting a walk-off homer for his travel baseball team in a tourney in Cooperstown, NY, and scoring goals in club-soccer tournaments in Vegas, Memphis, Indianapolis, Wisconsin, and Illinois, added his father, Ed Leszynski.

“I started with (learning) NFL teams and all the cities in America, and then different sports,” said Justin, noting that he took a special interest in Premier League and Champions League soccer teams around the world, particularly his favorite, FC Bayern Munich.

According to his social studies teacher and soccer coach at Attea, Zachary Glim, only two students have qualified for the state bee in the last nine years since the program started, and Leszynski’s done it twice. Glim noted that he’s following in his older brother Jason Leszynski’s footsteps. Jason, now involved in Model UN at Glenbrook South High School, is currently in New York for a national tournament with 20 other GBS students.

“During class we do hypothetical situations of what happens in Model UN,” said Justin. Glim and his co-teacher soon will be teaching a unit on South America, incorporating discussion about rainforests, inhabitants, and more.

“Mr. Glim is developing the pipeline for that by creating an interest in class for those things,” said Ed, using a sports analogy.

When asked whether the other is a better at soccer or social studies, both teacher and student smiled, paused, and said, “social studies.” Still, the two areas of interest are so interconnected for Justin.

Channel 274, the History Channel, is always on at home, Amy said.

“Video games also play a part,” said Ed, his father. “Last year, we went to Europe for the first and he wanted see the castle located in Werfen, Austria, because it was in a game he played. It was neat to see a kid and how he envisions things, and what and how it took his interest.” The game is Risk, a board and online game for strategy, diplomacy, conflict and conquest, and he was fascinated by Korean and Vietnam War maps and Europe.

“At home we have this map of the United States and my brother and I used to look at that map and find the cities of the teams, like Cincinnati and San Diego and other cities we were not really familiar with,” explained Justin, seamlessly adding that Risk inspires him and is his main geography practice field, and something he was allowed to study with during seventh-grade X-block enrichment period at Attea.

For the European vacation, Ed and Amy let their boys choose parts of the trip, and they included Barcelona, Munich and Salzburg.

“We didn’t know what to expect of the cities,” said Justin, the student athlete. “Mostly what we’ve heard of are the soccer teams, so that’s how we picked. Actually, we got to see a Bayern Munich match, and that was probably the highlight of our trip.” His anthropology lesson came when he sat in the standing-room-only super-fan section amidst cigarette smokers, soccer scarves and choreographed chants.

“We are such a sports-oriented family,” said Ed, “yet some of our highlights have been seeing what else is at the high school level – the Model UN and other clubs – and so what does the future hold? How do you make the world better? How do you participate, contribute to society? We’re looking for all the opportunities that GBS provides, and for him to find his passion.” Ed noted Justin’s kitchen skills, too, including crepe making.

“I’m simply proud of Justin for pursuing his passions, whatever they may be. That along with this enriching environment allows him to blossom and that’s fantastic,” said Amy. “We provide a little bit of framework, and he shines.”

“I’m probably not going to be able to play sports competitively past high school,” said Justin, “so it’s important to be strong academically because that’s where my future is. Going to college and getting a job…or playing pro sports, that’s cool, too.” His dream job: A National Basketball League general manager.

“I just think it’s cool to compete against the other best people,” Justin said. “It should be fun. It’s just like going into a (soccer) game where you know you’re going to be against a player or team that’s established. You look forward to the hard competition.”