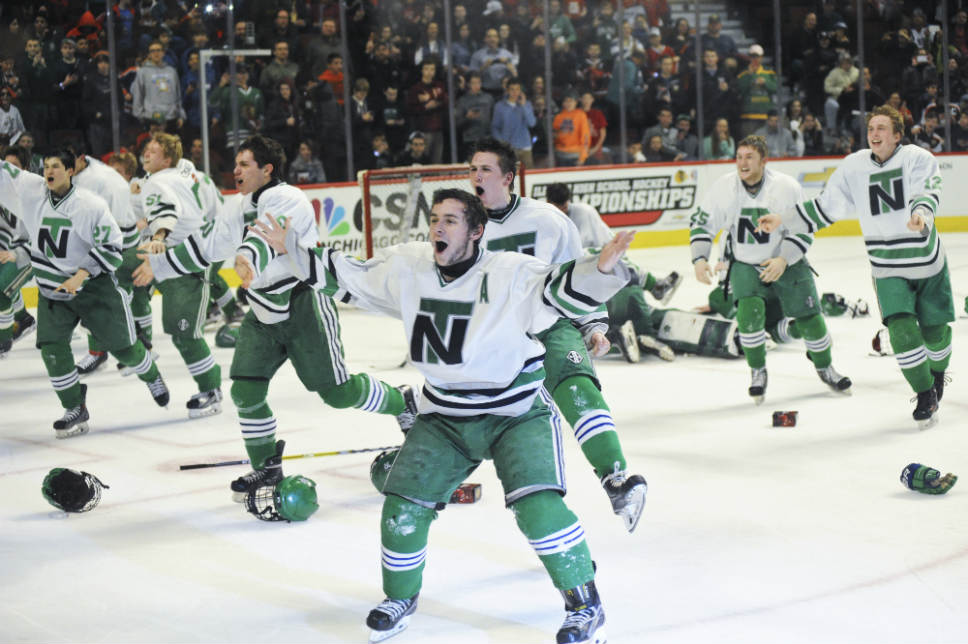 It was, after all, St. Patrick’s Day at United Center in Chicago, and Providence Catholic’s players are called Celtics.

“I thought we’d be up against too much luck of the Irish,” Graham said afterward on March 17.

But PC had to deal with too much pluck and production from the University of Illinois-bound Graham, who scored two goals, assisted on another and earned Most Valuable Player honors in NT Green’s 4-2 victory — the program’s 14th state championship and second straight over Providence Catholic.

Between 12,000 and 15,000 mostly green-clad spectators bounced and roared and watched Green win its 32nd straight game this winter.

The home venue of the Chicago Blackhawks and Chicago Bulls was electric throughout the event, from the end of Jim Cornelison’s powerful rendition of the national anthem until Green’s ecstatic players piled atop winning goaltender Hayden Wieczorek, a junior who finished with 25 saves and allowed only one goal. (PC scored an empty-netter midway through the second period.)

“It’s a unique experience, playing in an atmosphere like this, and our new guys were a little overwhelmed,” said Green coach Bob Melton, now 12-1 in AHAI/Blackhawk Cup state finals.

“This was one of the best teams I’ve ever coached. It was deep, with a lot of different line combinations.”

NT Green (67-9) had entered the game with a 4-0 mark against PC — and an undefeated record against Illinois teams. Graham solved all-state goalie Ryan Iaciancio first, blasting the puck after collecting a pass from forward Kyle Retondo with 2:41 left in the first period. Graham then celebrated by genuflecting while gliding and using his right glove to pat and smooth a stretch of ice.

Graham completed the night’s scoring with an empty-net goal with only 27 seconds remaining in the championship game. It traveled about half the length of the rink, and it was set up by senior forward Jack Raith, who scored four goals in last year’s state title game.

“I didn’t think that last one would go in,” admitted Graham, who tallied 51 goals to go with 51 assists this winter. “I thought, ‘Icing, for sure.’ But it curled in.”

Senior forward Charlie Burton — Illinois-bound, too, and the JJ O’Connor Male High School Player of the Year — scored Green’s second goal (on a pretty assist from forward Matthew Mulhern) in the second period. Also in the second period, with 1:50 left, Graham fed the puck to forward John Robinson, who beat Iaciancio (37 saves) for his 30th goal of the season.

Senior forward Tommy Cahill — a first-year Green player who played AAA hockey last winter and led Green in points (64 goals and 61 assists) this year — suffered a shoulder injury in the second period and did not return. The victors also overcame an unusual sequence in which a New Trier Green player unintentionally scored Providence Catholic’s first goal — into an empty net — on a delayed penalty in the second period.

“That was an ‘Oh wow’ moment,” Melton said. “But our guys rallied around the mistake and held a fabulous Providence Catholic team to only one goal.” 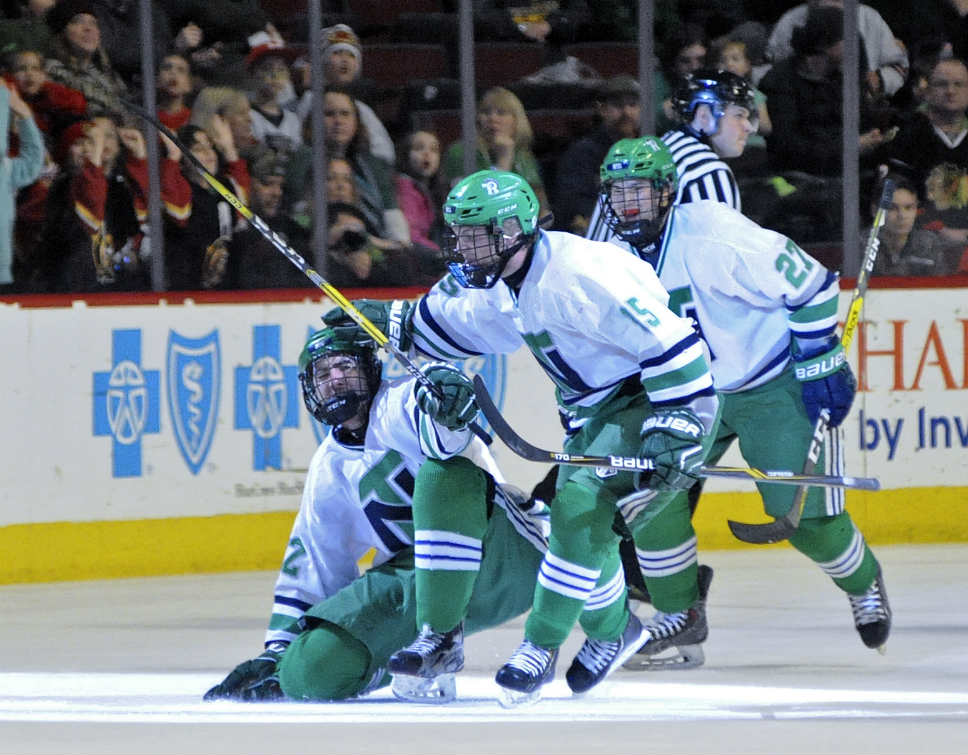 New Trier’s Michael Graham puts his hand on the ice after scoring the game’s first goal. PHOTOGRAPHY BY GEORGE PFOERTNER 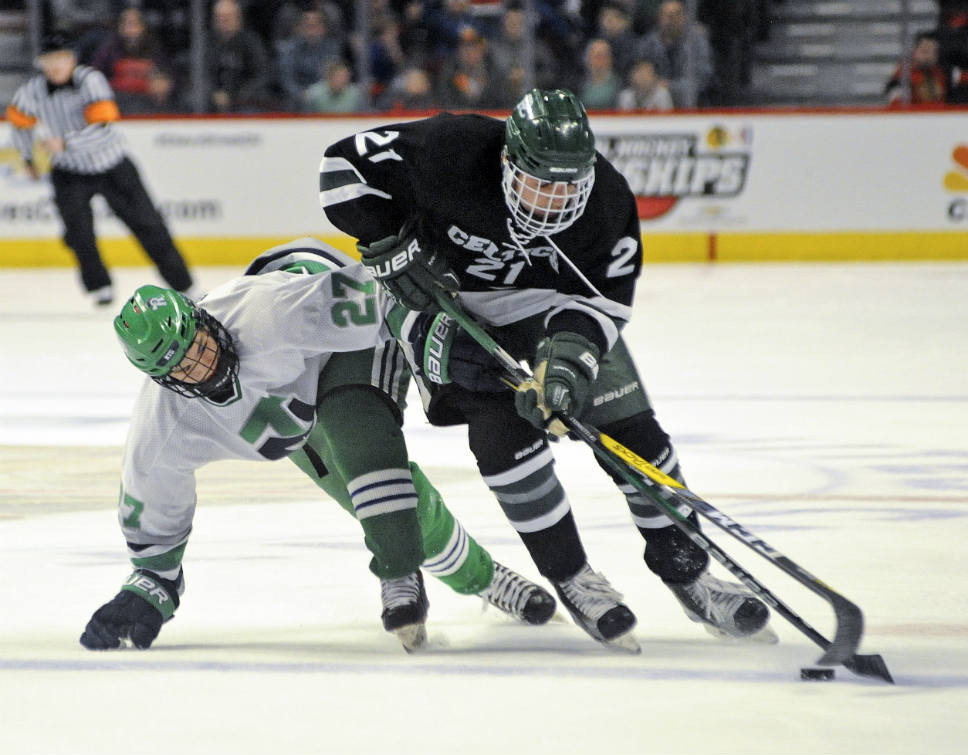 Connor Baldwin (No. 27) battles for the puck against Providence Catholic’s Jake Vennetti. PHOTOGRAPHY BY GEORGE PFOERTNER 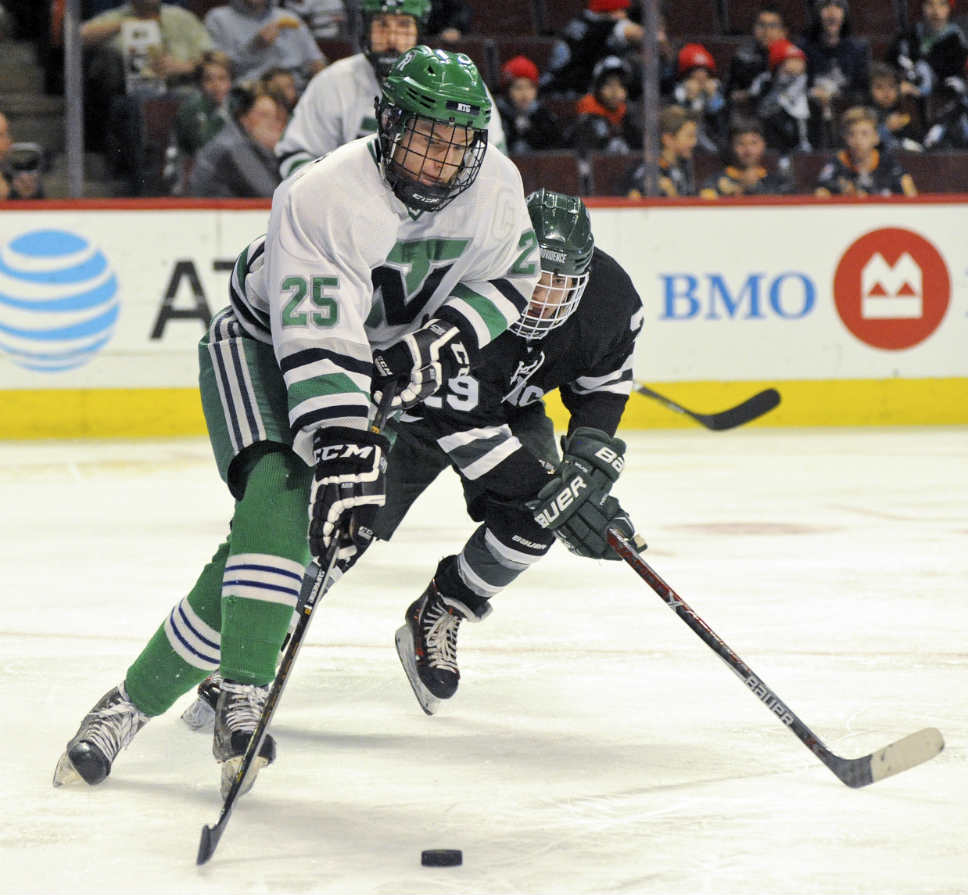 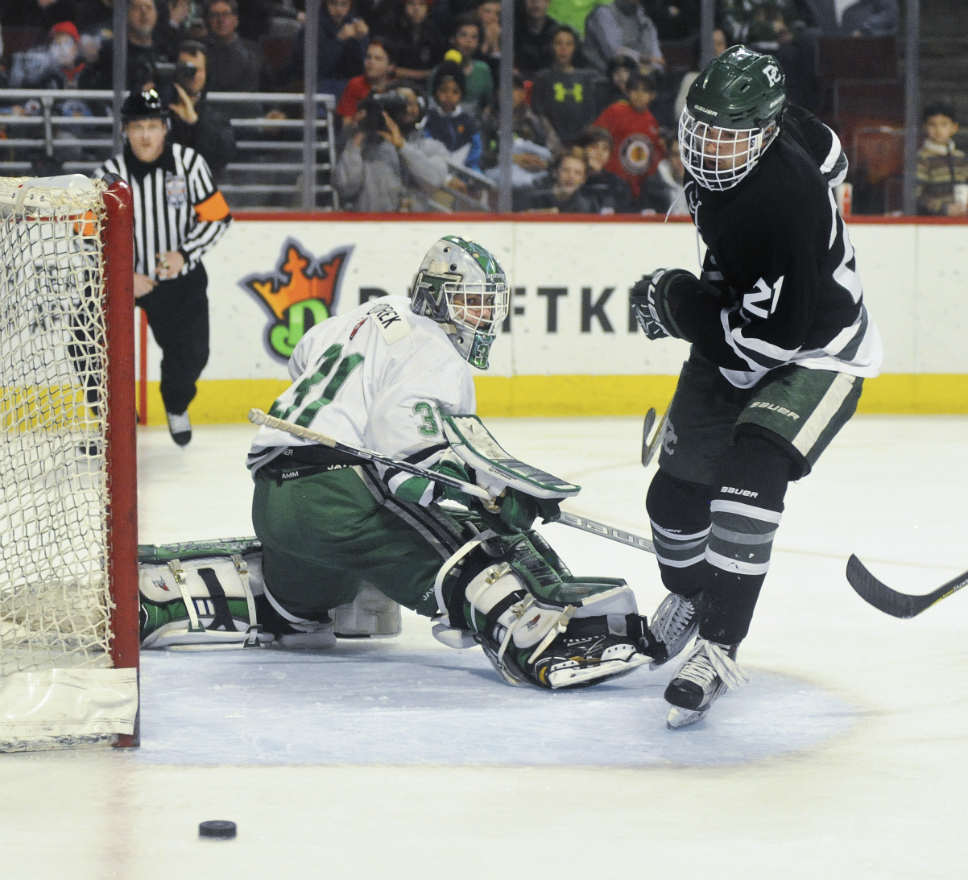 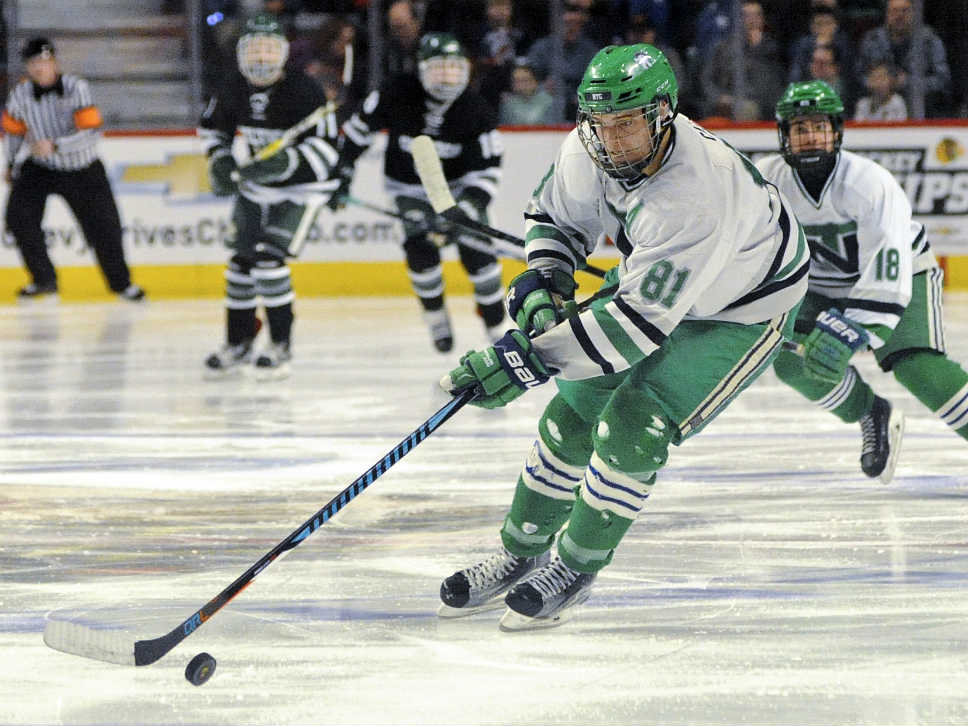 NT Green’s Tommy Cahill corrals the puck prior to sustaining an injury in the second period. PHOTOGRAPHY BY GEORGE PFOERTNER 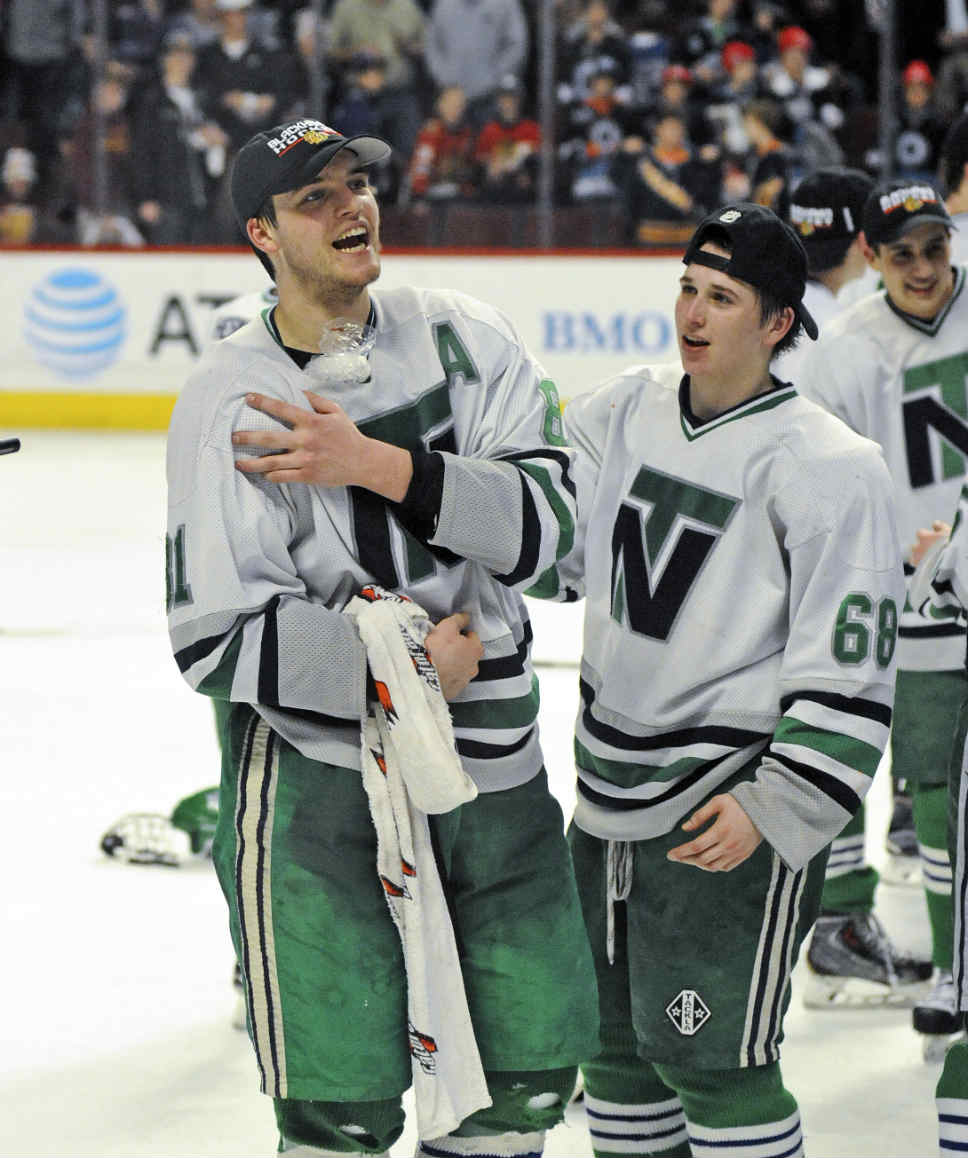 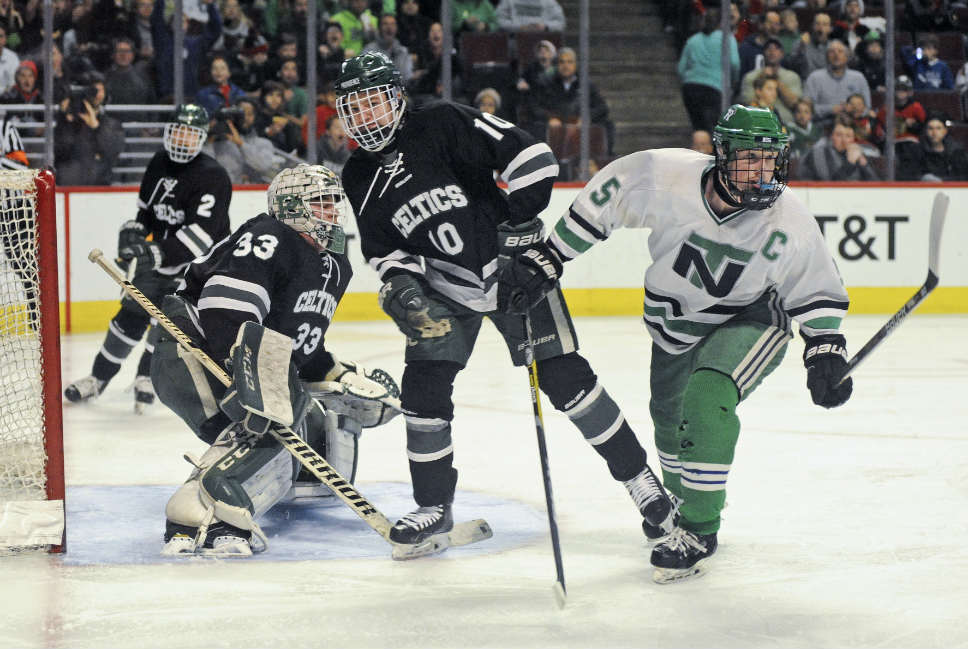 Charlie Burton gets ready to celebrating after punching in goal in the second period. PHOTOGRAPHY BY GEORGE PFOERTNER 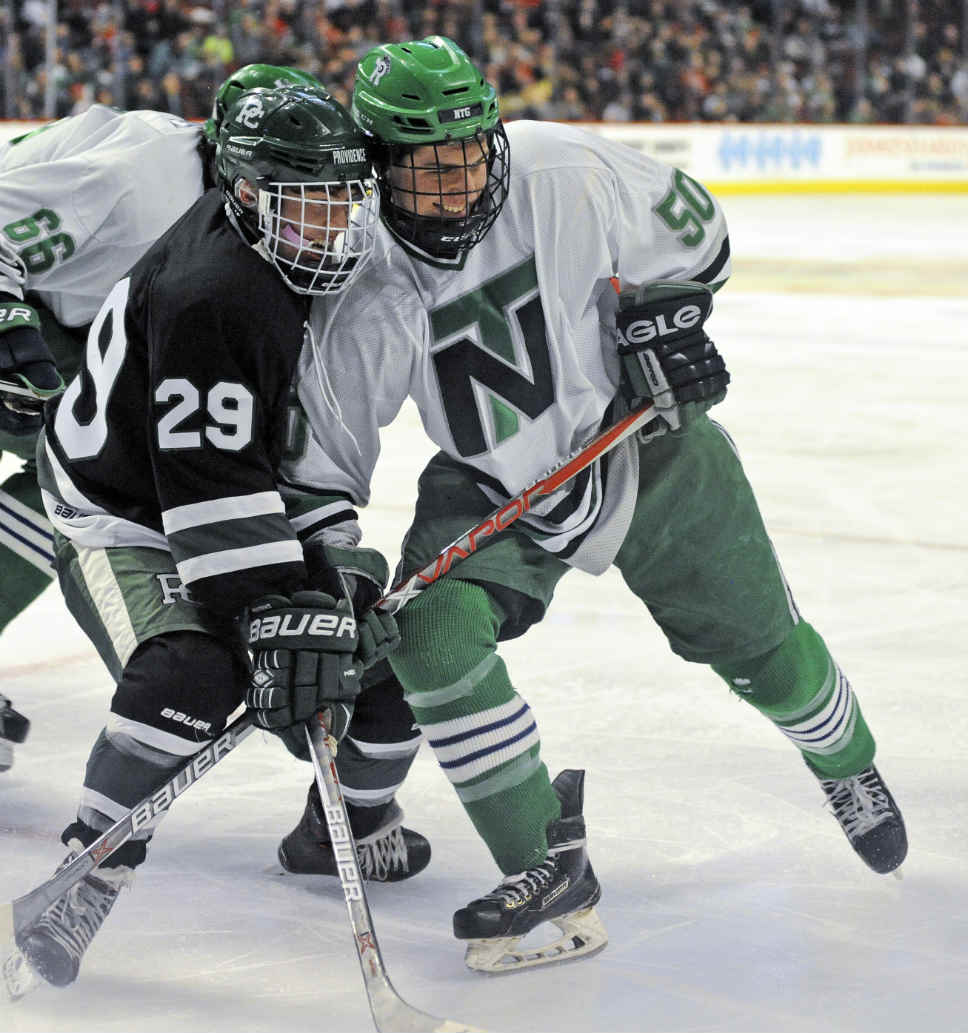 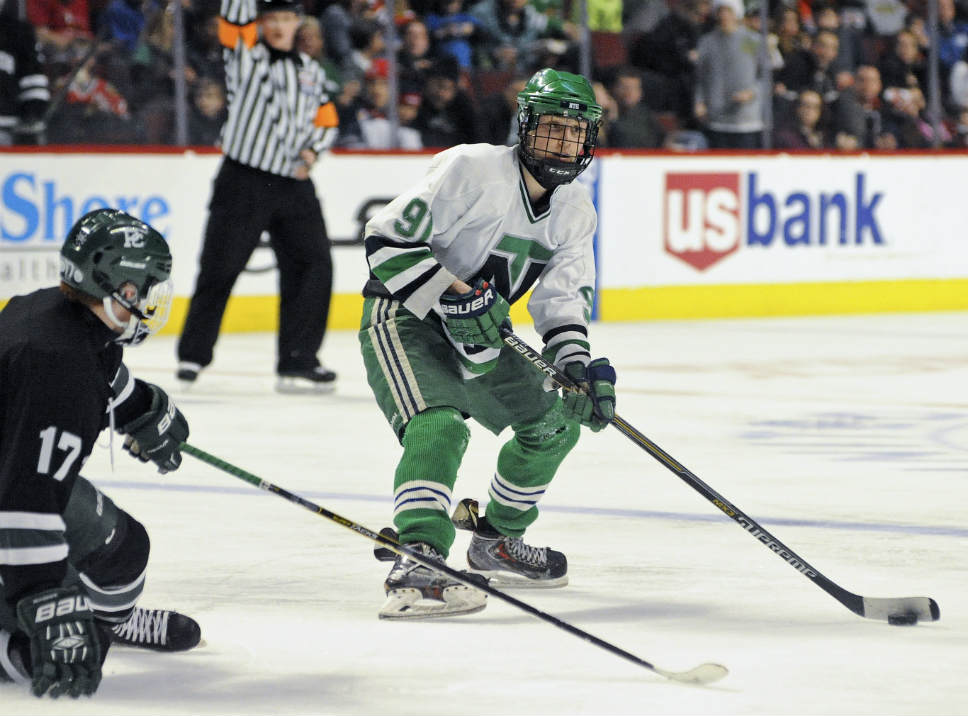