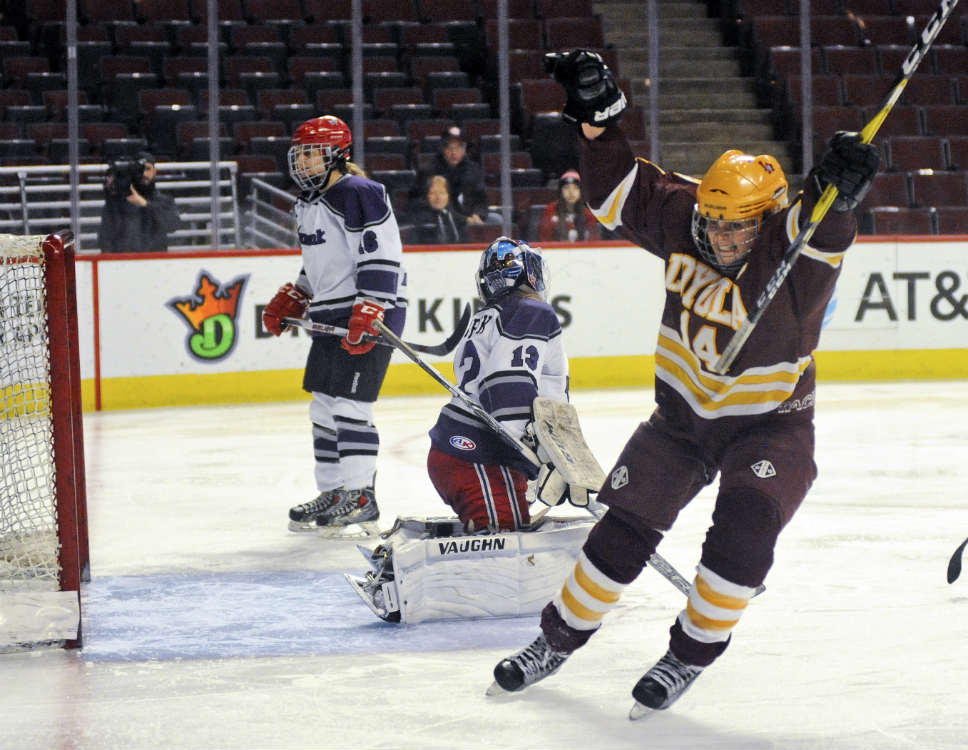 Loyola Academy’s Valerie Caldwell celebrates after scoring a goal in the state final. She had two goals in the 7-3 setback to Glenbrook. PHOTOGRAPHY BY GEORGE PFOERTNER

A little while back, Valerie Caldwell made a visit to the University of Vermont.

Almost immediately, the Loyola Academy hockey superstar was taken in by the beauty of this understated school, tucked in between the Adirondack and Green Mountains, a hop, skip and slap shot away from the Canadian border.

Caldwell, an ace on the ice, can’t wait to start the collegiate chapter of her life: Beauty and the Crease.

But, on March 17, the business at hand called for Caldwell to play in her fourth straight Amateur Hockey Association Illinois (AHAI) Blackhawk Cup state championship game at United Center.

It didn’t turn out glorious — for Loyola. A super talented Glenbrook squad scored early and often on its way to a 7-3 victory.

But Caldwell seldom leaves a rink without leaving her mark.

So with 7:04 left in the third period, the Glenview resident struck … with a strikingly beautiful goal.

This one was for the eye and the beholder.

The girl can turn scoring into an art form.

And this one was her Monet.

Caldwell, as effervescent as she is efficient, gathered in the puck at the point, bobbed and weaved her way towards the crease, and whistled a picturesque slap shot past a suddenly statuesque Jojo Chobak to cut the deficit to 5-2.

The goal was exquisite. Museum worthy.

Somehow, Caldwell found a way to turn Glenbrook’s star goaltender — Chobak, it should be noted, was simply outstanding for the most of the game (29 saves) — into a wax figure at London’s Madame Tussauds.

“Yeah, it was sick,” said Caldwell, eyes sparkling, intermittently between some post-game tears. “It was just nice to score.”

Four minutes later, Caldwell solved Chobak again. This time, she skated lead on a breakaway and twisted a decorative left-handed wrister past Chobak.

Again, the goal was as pretty as they come. But way, way too late.

By the time Caldwell had scored her 22nd and 23rd goals of the season in the third period, the gap between Loyola and Glenbrook was a little too Adirondack. A little too mountainous.

But give Loyola this: all three of its goal were aesthetically pleasing.

With 2:23 left in the second period, LA dented Glenbrook’s 4-0 lead when four-time all-stater Tess Dettling did that thing she does in state championship games.

The ever-ready senior dynamo took a feed from fellow senior all-stater Greta Skarzynski, who had cleared the puck from behind the Glenbrook net, and full-blasted it past Chobak. It was her 15th goal of the season for LA.

“I was at the front of the net with my stick down,” said Dettling, who concluded her career at LA by scoring at least one goal in four state championship games. “I just slapped it in.

“We had dug ourselves a pretty big hole. I was glad to give our team a little energy, a little boost,” added the Yale University-bound Dettling.

Two of the game’s other offensive difference makers wore purple jerseys: Caitlin Schneider (No. 16) and Hannah Jensen (No. 50). Both Glenbrook players walked off the ice with hat tricks.

“Our goalie [junior Tianna Lavalle] was getting beaten up pretty good out there,” said Caldwell. “They’re not an easy team to go up against.”

When an opportunity presented itself, Schneider and Jensen usually pounced on it.

With the exception of Schneider’s exceptional score — her 30th goal of the season — on a breakaway with 4:20 left in regulation, Glenbrook’s goals, including a late empty netter, a redirect and a couple of tap-ins, were not things of beauty.

“Some of their goals were scored six inches from the net,” said LA head coach Michael Glass, still fully impressed with this Glenbrook squad. “Dirty goals. They had the dirty goals tonight. We didn’t.

“Their goalkeeper [Chobak] was very, very good,” said Glass. “We knew that we needed to score early. We needed to make their goalie uncomfortable. We needed to take her out of her game.”

“Their goalie was unbelievable,” Dettling added.

“Yeah, she was pretty amazing,” chimed in Caldwell.

But Caldwell, who scored 35 goals for LA in 2016 and 38 in 2015, wasn’t about to take herself off the hook. Wearing her maroon No. 14 jersey with gold lettering, she kicked herself for not converting on a couple of golden opportunities in the early going. They will haunt her for a while.

“I missed on a couple of breakaways,” Caldwell said. “If I just could’ve gotten one, it would have been a different game.” 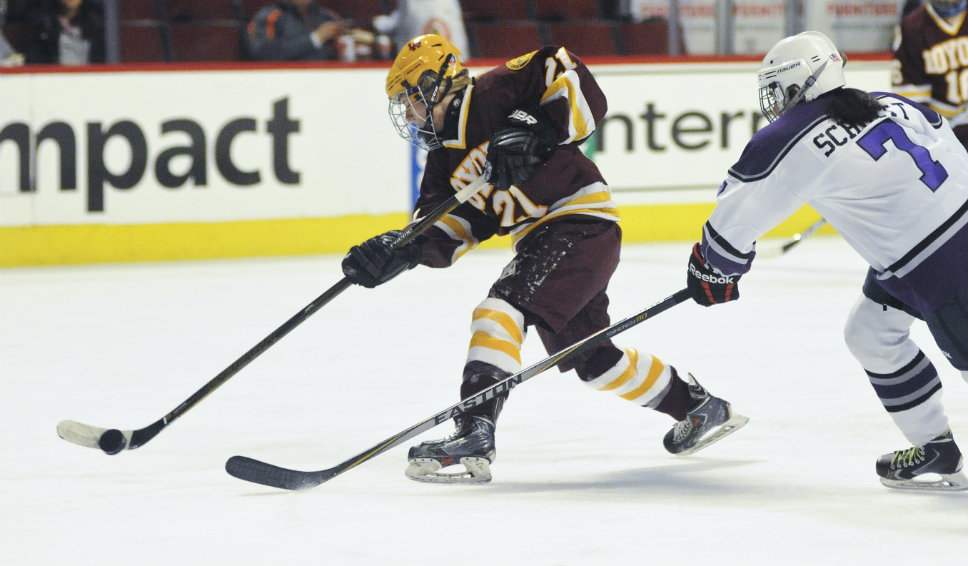 Loyola’s Tess Dettling puts her stick on the puck during in the state championship game. She had one goal. PHOTOGRAPHY BY GEORGE PFOERTNER 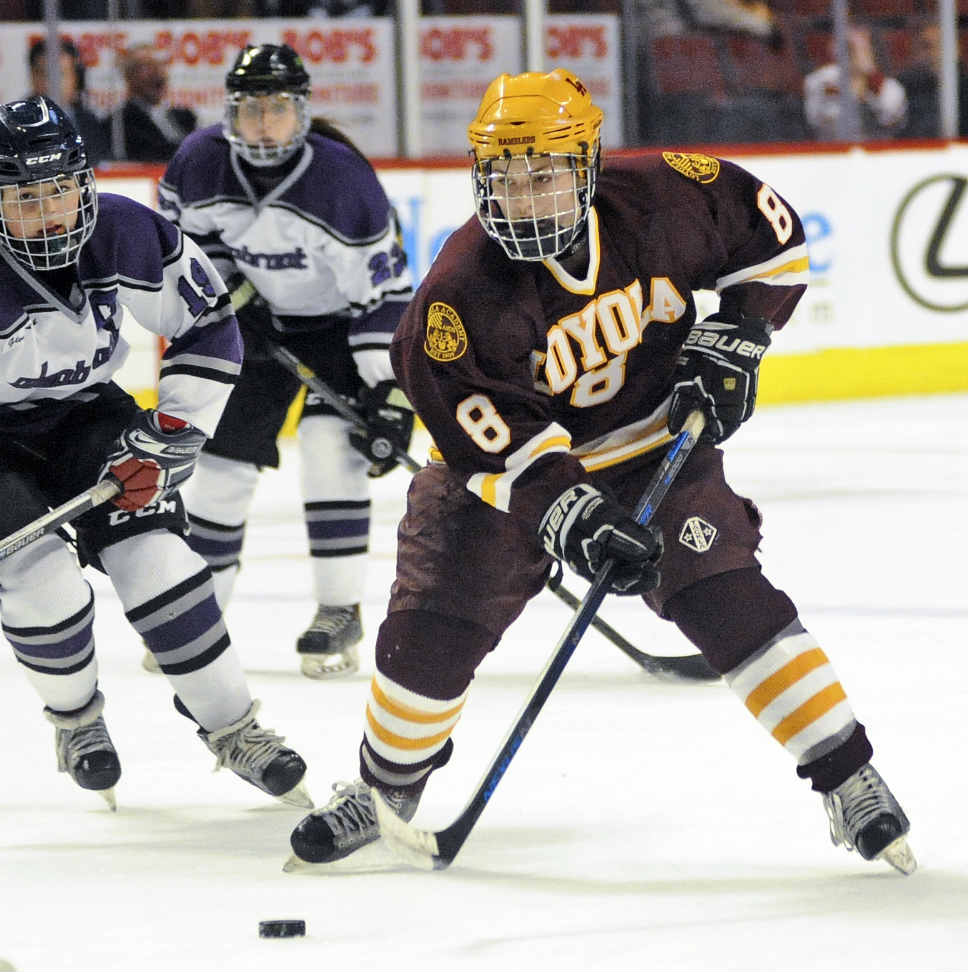 Loyola’s Greta Skarzynski takes the puck up the ice. PHOTOGRAPHY BY GEORGE PFOERTNER 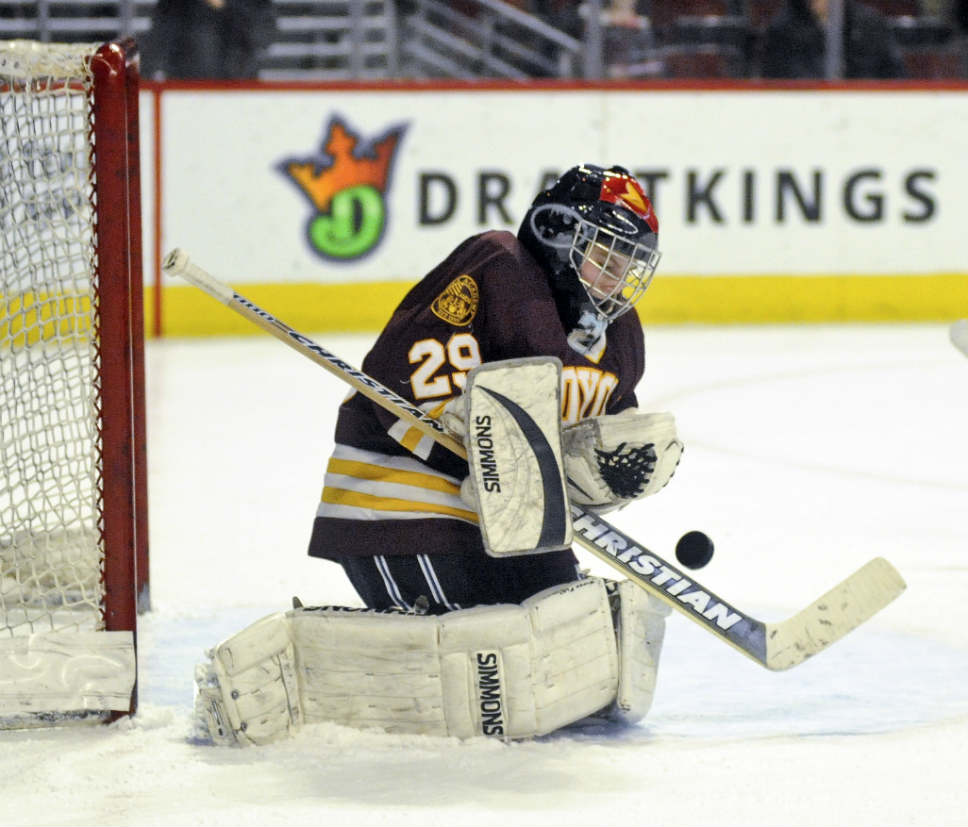 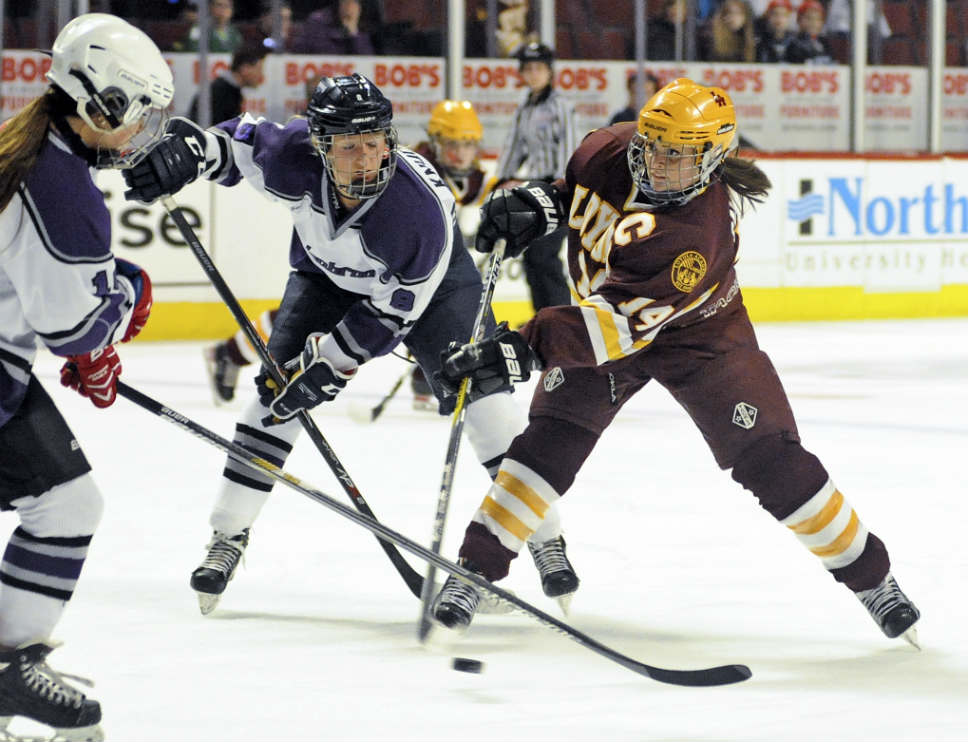 Valerie Caldwell of Loyola tracks down the puck. PHOTOGRAPHY BY GEORGE PFOERTNER 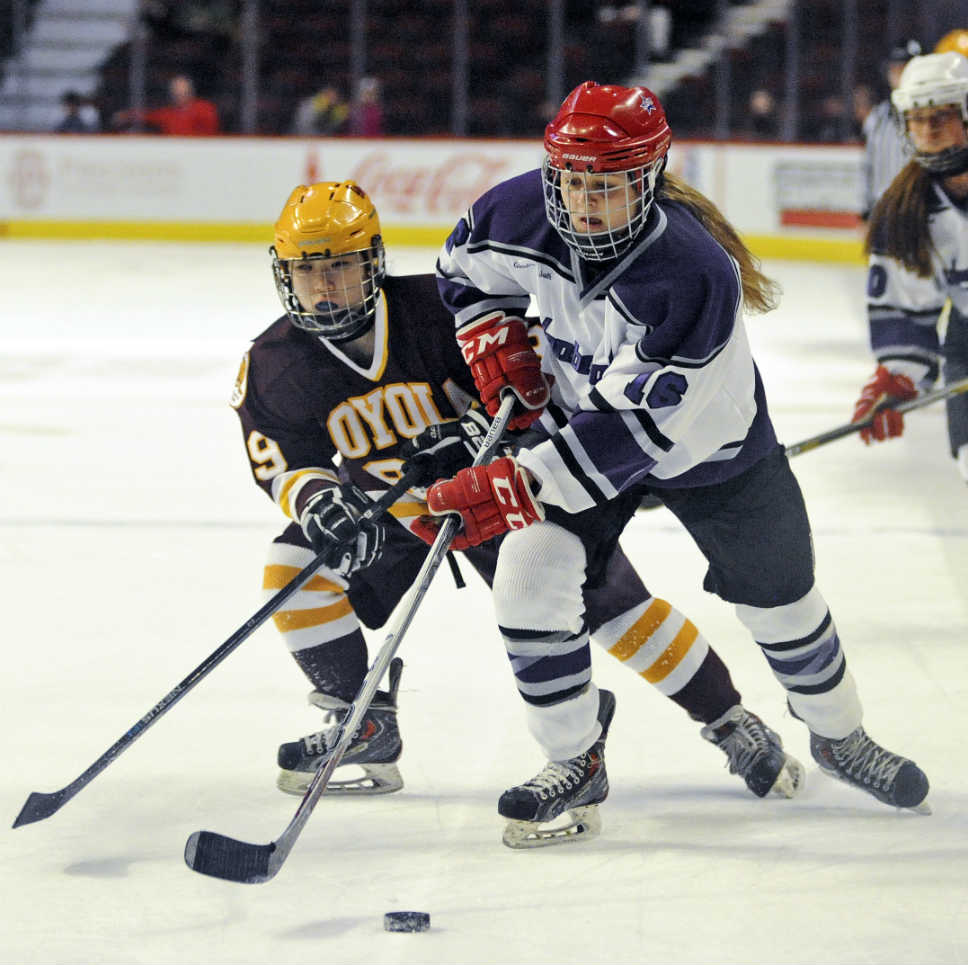 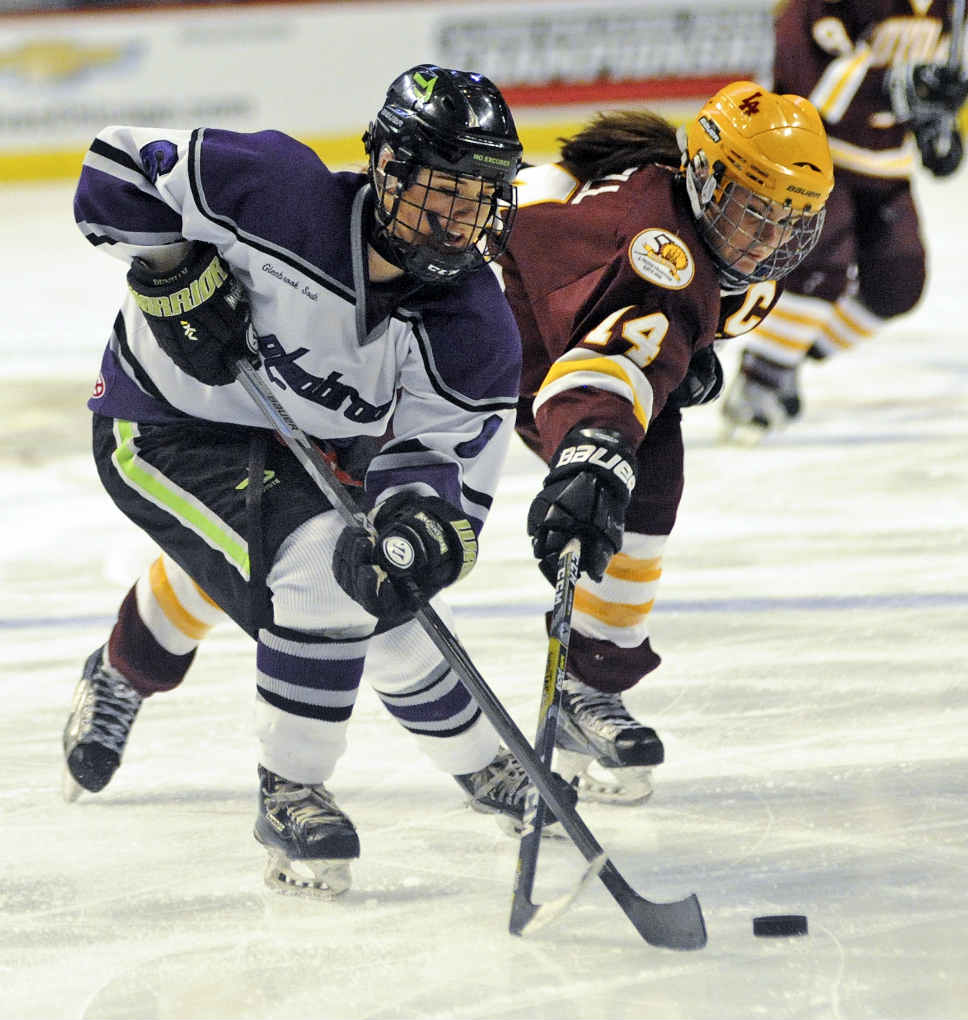 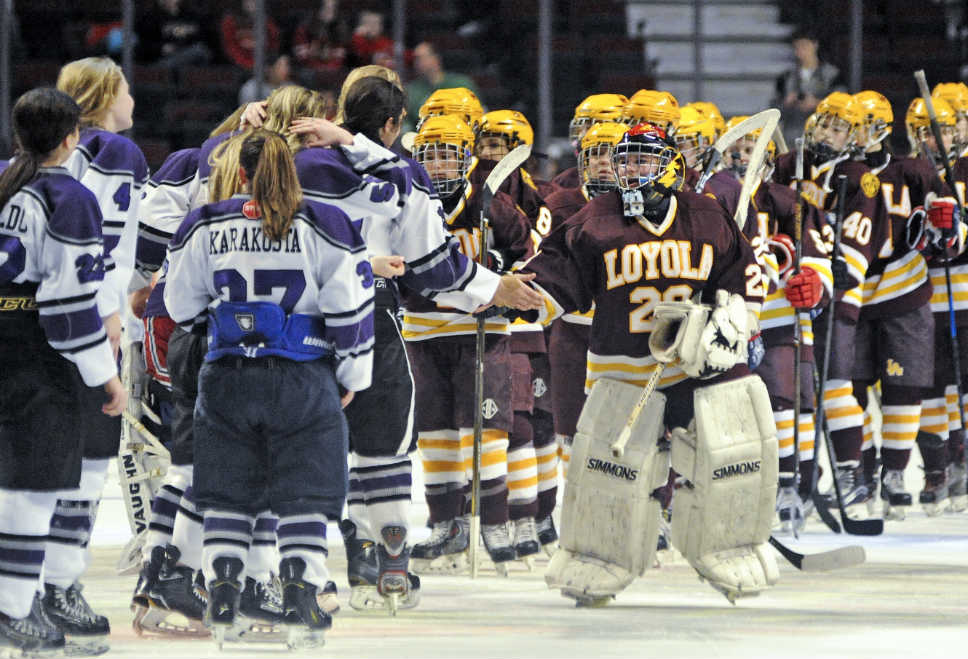