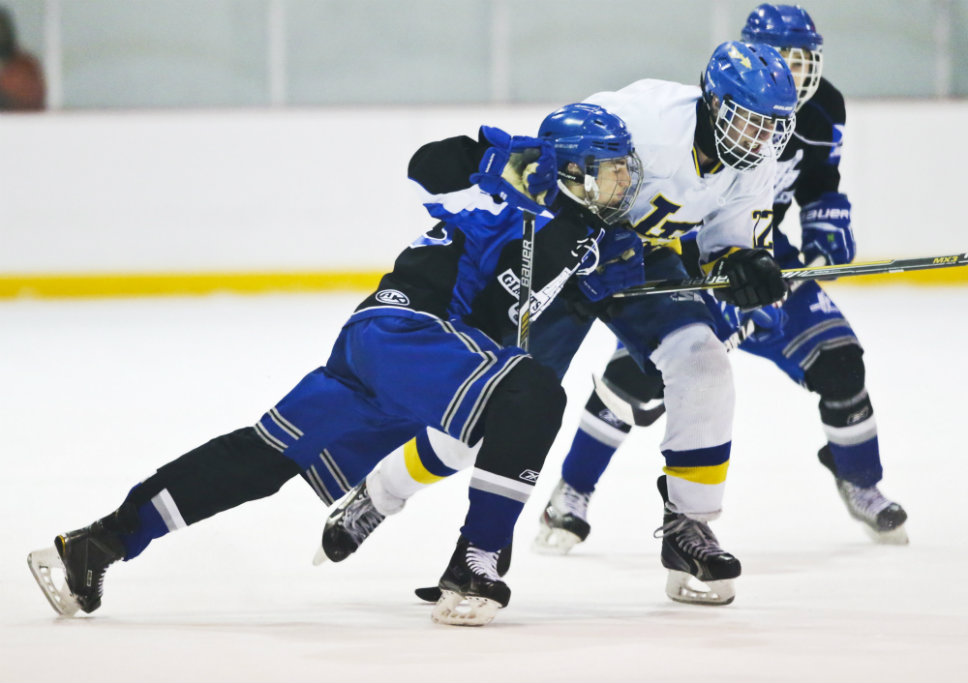 Aaron Hope was camping with many others in Wyoming when an uninvited bear made an appearance last summer.

The 12 campers — under the direction of two knowledgeable leaders — were told to sing their lungs out.

“And bang on pots and pans,” says Hope, a Highland Park senior who completed his third year of varsity hockey last month. “We had hoped that would make the bear go away. But the bear wouldn’t leave.

“We ended up leaving and traveling a half mile to relocate, after making all of that noise for about 20 minutes.”

About 20 minutes — behold the time Hope spent as a gymnast. He was 4 or 5 years old when his mother, Linda, signed him up for gymnastics classes at a studio located at Centennial Ice Arena in Highland Park.

“I wasn’t that flexible,” the 5-foot-10, 150-pounder recalls. “When I was learning gymnastics, I saw kids playing hockey and thought, ‘I want to try that.’ ”

A couple of years later, Hope was skating for the Fighting Sioux, a Mite house team coached by his father, Mike, who had played hockey while growing up in Minnesota before focusing on baseball as a high school student.

“It was unique,” Hope says of his initial attraction to the sport. “No running, no walking. The speed of the game … I enjoyed that. My dad was mellow as a coach, and he taught me the rules of hockey.”

Hope, a forward when he entered high school, did not make the Giants’ varsity club before the start of the 2013-14 season. He then became a defenseman as a sophomore on varsity, skating two to three shifts per period.

“Aaron was our No. 5, No. 6 defenseman that season,” Giants varsity hockey coach Sean Freeman says. “From that point on, he showed perseverance. He kept working hard, kept plugging away. He believed in himself. He bet on himself — and won.

“Aaron,” the coach adds, “had above-average intelligence and athleticism and turned himself into one of the best hockey players in the state.”

The Amateur Hockey Association Illinois (AHAI) all-state team was named last month. Two Giants — Hope and junior forward Dylan Abt — made it. Hope then made, after four tryout sessions, the Illinois team (as an alternate selection) that will compete in America’s Showcase in Pittsburgh from April 20-24.

The outdoors enthusiast finished with nine goals and eight assists atop indoor rinks for a 17-24-8 squad this winter, with three of the assists coming in a satisfying 9-0 rout of Deerfield at Glacier Ice Arena in Vernon Hills on Nov. 23.

Hope netted three power-play goals in his final prep season; only Abt, with seven, notched more such tallies among teammates.

“The teammate who really helped me my sophomore year was [defenseman] Andrew Krug (Class of 2015), our captain,” says Hope, an assistant captain in the 2016-17 season. “He looked out for me, gave me tips, told me how to do drills the right way, how to work out the right way.”

Hope’s attendance at camps last summer — at American Heartland Ice Arena in Lincolnwood — enhanced the offensive side of his game.

A reliable D-man became an A-one threat with the puck.

And many other onlookers.

“He’s not a flashy kid, but the way he moved the puck sometimes made opponents look like fools,” Freeman says. “You’ve seen running backs in football cut right and cut left on their way to touchdowns, right? Well, Aaron looked like that on the ice at times. He stepped up his game on offense this year.

“I coach hockey because of kids like Aaron, a local kid who was interested in reaching the next level in the sport. The thing I’ll always remember about Aaron is the smiling Aaron I saw in the locker room. He was always ready to go, ready to jump on the ice and compete at a practice or in a game.”

Hope passes Frisbees in the spring as a member of Highland Park High School’s Ultimate club.

One of his outlets outside of sports is music. An alto/soprano saxophone player and a member of the school’s Wind Ensemble during his first three years, Hope earned a Wind Symphony spot this year. The group was scheduled to perform at the Chicago Symphony Center earlier this week.

Reading interests him, too, especially adventure and sports books. When he was 12 or 13, Hope’s eyes consumed Into Thin Air, a book by Jon Krakauer about a perilous expedition up Mount Everest. It jumpstarted Hope’s interest in the outdoors.

Before that encounter with a bear in Wyoming — a topic, by the way, he wrote about for one of his college-application essays — Hope joined outdoors groups for adventures in Alaska and around Yosemite National Park.

He has climbed Mount Shasta, the fifth highest peak in California at an elevation of 14,000-plus feet.

Notable: Junior forward Dylan Abt paced the Highland Park Giants in points (30 goals, 23 assists) in the 2016-17 season and averaged 1.13 points per game. The next four in total points were Ryan Genender (22, 24), Jake Mandel (16, 16), Gabe Schlussel (16, 14) and Kyle Powers (12, 17). Evan Robertson and Chase McKellar shared most of the goaltending duties. Each posted eight victories, and Robertson — in goal for the team’s lone shutout, vs. Deerfield — finished with a team-best .868 save percentage. 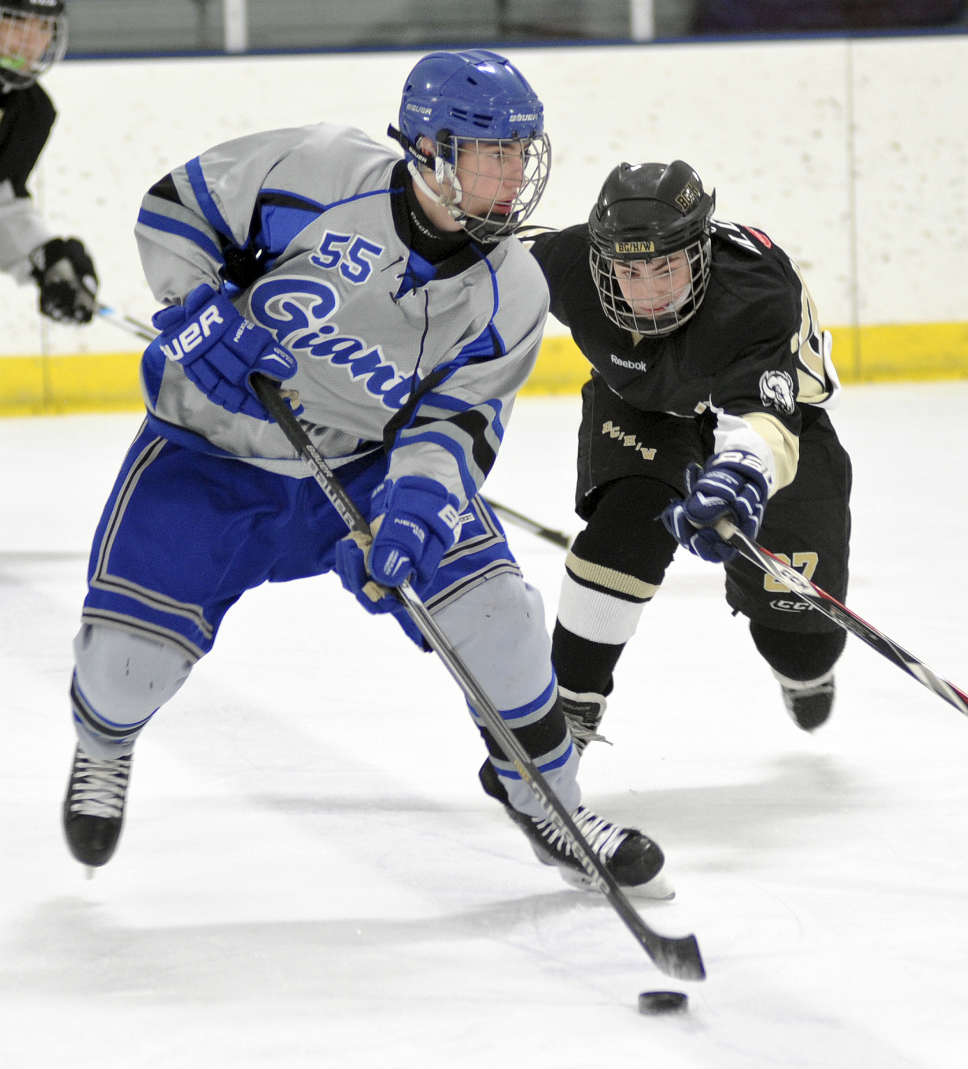