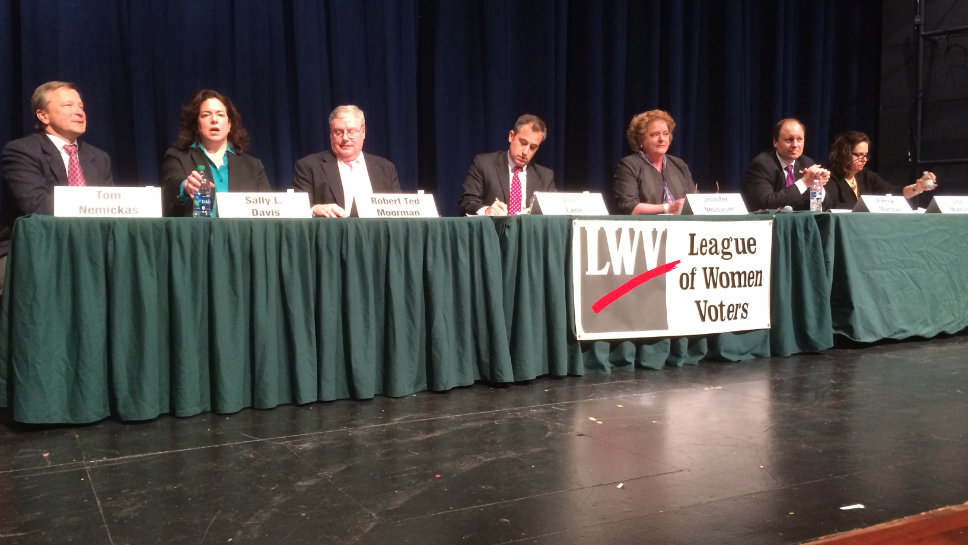 LAKE FOREST/LAKE BLUFF — The quality of Lake Forest High School is either deteriorating or in good shape, depending on the specific views of candidates for Lake Forest Community High School District 115 Board of Education.

Seven of the eight contenders for four seats on the seven-member board debated on March 12 in the high school auditorium before a crowd of more than 300 people. Subjects included the quality of the school, academic performance, fiscal management and transparency.

Voters will decide the winners of those four seats in the April 4 election. Early voting starts March 20 at Lake Forest City Hall.

The campaign began in early December when the Lake Forest Caucus backed Tom Nemickas, Sally Davis, Ted Moorman and Dave Lane for the board.

All of the candidates except for Good participated in Sunday’s debate, showing their differences of opinion in often spirited comments. Mienville said Good was unable to attend because of a family medical situation. The forum was sponsored by the League of Women Voters of Lake Forest and Lake Bluff.

One area of disagreement was whether students should be placed in tracks based on their academic ability. This led to a discussion about the value of opening advanced placement classes to all students or only those who show the intellectual metal to take them.

“Detracking was tried 40 years ago in the 1980s,” said Mienville. “It failed. Detracking does not benefit any group.”

But Moorman, who is backed by the Caucus, said 95 percent of students taking advanced placement tests registered scores sufficient for college credit.

When it came to finances, the candidates argued about the value of administrative expenses. Neubauer said the percentage of money spent per student for those services when adjusted for enrollment size was more at Lake Forest than at other north suburban schools.

“The administrative cost is 67 percent in District 115,” said Neubauer. “It’s much less at New Trier and Stevenson.”

Davis said the differences are more about bookkeeping than actual expenses.

“At Lake Forest the athletic director is classified as an administrator because he doesn’t teach classes,” said Davis. “At Stevenson (she) is not considered administrative. Department heads here are administrative because they only teach two classes.”

An area of economic concern expressed by Mienville was the use of consultants. She said the board should consider whether the work they perform would be better handled by employees.

When asked about important issues in the campaign, Neubauer said a lack of transparency by the district and the board must be reversed. She said that when a group from the school traveled to Rockville Centre, N.Y., she filed a Freedom of Information Act request to learn what they accomplished.

“I submitted a FOIA,” said Neubauer. “Nothing was produced. There was no work product.”

Click here for a detailed review of the positions of all candidates and some of their biographic information.

The debate was video-recorded. DailyNorthShore will provide a hyperlink when the tape becomes available online.