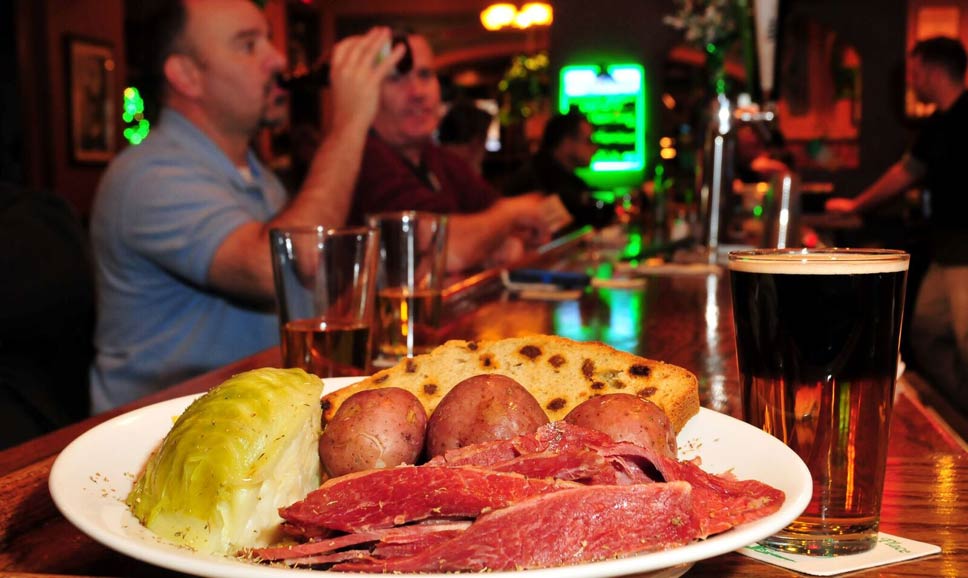 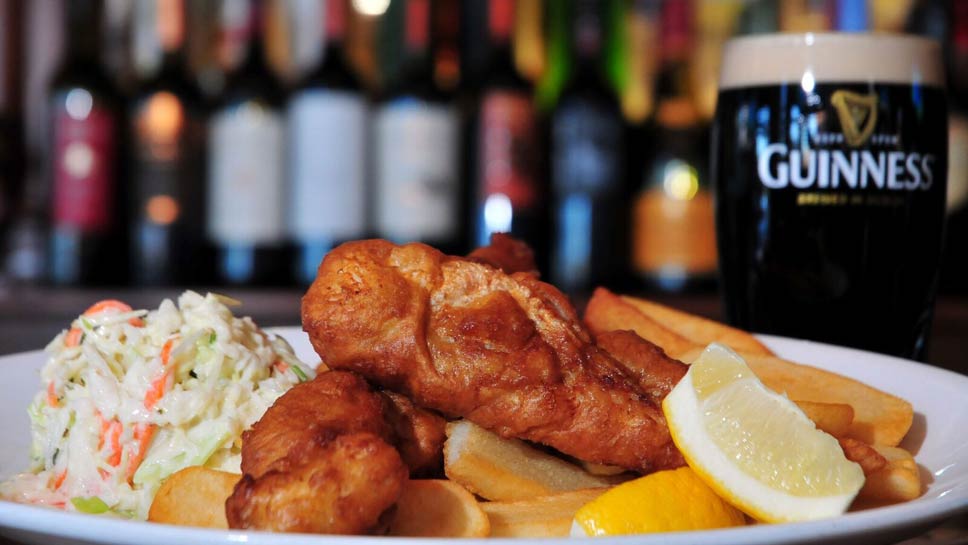 Fish and chips from Curraugh in The Glen. PHOTOGRAPHY BY STEVE HANDWERKER/JWC MEDIA

Grandpa’s was built in the 1890s as Lang’s bar, serving the community and its lumber market, and hosted gambling and other dubious activities. Generations of patrons knew only a first-floor barroom in the house-like structure until the Middleton family, its newest owners, began major renovation in 2010.

“People will be really pleasantly surprised to experience all these new spaces and rooms, and still the old Grandpa’s they’ve always known, a familiar establishment, its bar and décor,” said Rory Middleton, manager. Among the newer spaces is a homey parlor with dark, built-in bookcases, fireplace, leather sofas and coffee table on a rug-and-tile floor. There is also Lang Hall for live music, a boardroom for small groups, and a spacious patio. The Chicago-style tin ceiling and dark wood still warm the old main bar, as do long-time regular patrons.

Curragh might only be three years old, but it’s steeped in Celtic culture. “Soccer’s always on,” said Steve Lewish, manager, of the 15 flat-screen televisions throughout the large, two-room space. If that’s not enough, take a gander at the wall of Irish whiskeys – at least 20 to choose from, plus two dozen beers on draught, and a broad spread of Scotch and wine to boot.
Situated in the heart of The Glen, Curragh’s traditional, red-stained wooden bar, unfinished brick walls, cultural knickknacks and Gaelic signs, two-sided fireplace, exposed ceiling rafters and dormer windows, and bright vibe will give you a longing for your roots or help you to feel Irish for a day. The pub’s cheerful staff makes you feel céad míle fáilte – 100,000 welcomes.

Grandpa’s will open at 11 a.m. on St Patrick’s Day and performances commence with The Chicago Rovers at 1 p.m., followed by Mickawish at 4 p.m., and Duke Sportage Experience at 8 p.m. Crowds will flow throughout the two-story building now, instead of the temporary tents in the parking lot as was in years past. Weather permitting, the patio will be open, and crowded. Lang Hall performances will be broadcast throughout the bar on flat screens.

“This place will be raucous until we kick them out,” said Middleton, noting that it closes at 2 a.m.

Corned beef and cabbage and more

“Our Irish stew is made with Australian lamb, which has a better flavor than a domestic lamb,” said Jorge Guadarrama, chef, who’s been with the organization since 1999. “All of our food is traditional Irish, and all homemade, with no pre-made ingredients,” he added, noting that the restaurant serves gluten-free items, too. Recent guests, from Ireland, including a little girl, actually came back to the kitchen to compliment him on his shepherd’s pie and Irish stew, he said.

As for the bar, Lewis recommended “the perfect pint of Guinness,” and that he’ll prepare vodka Jello shots and The Shamrock, a concoction of Malibu rum, Midori and pineapple juice.

Grandpa’s kitchen will serve its traditional corned beef dinner, which is only available for the month of March or shorter if the pub runs out of corned beef. Like Curragh, this is no run-of-the-mill corned beef, but rather something special, procured from a local deli producing a high-quality, lean meat.

“It’s a slightly thicker cut and even more meat than our half-pound Reuben sandwich, which we offer all year long,” said Middleton. Grandpa’s corned beef is served up with a boiled, bright-green wedge of cabbage, red potatoes, and a slice of Irish soda bread.

Middleton’s barkeep serves up a finely balanced Half-and-Half (Guinness and Bass Ale) to wash down a hearty meal with added flavor and fun.

While the vibes may be distinct – one more of a public house and the other more of house gone public, both Curragh and Grandpa’s, respectively, Irish and Irish-for-a-day will find welcoming, warm, filling, and fun.