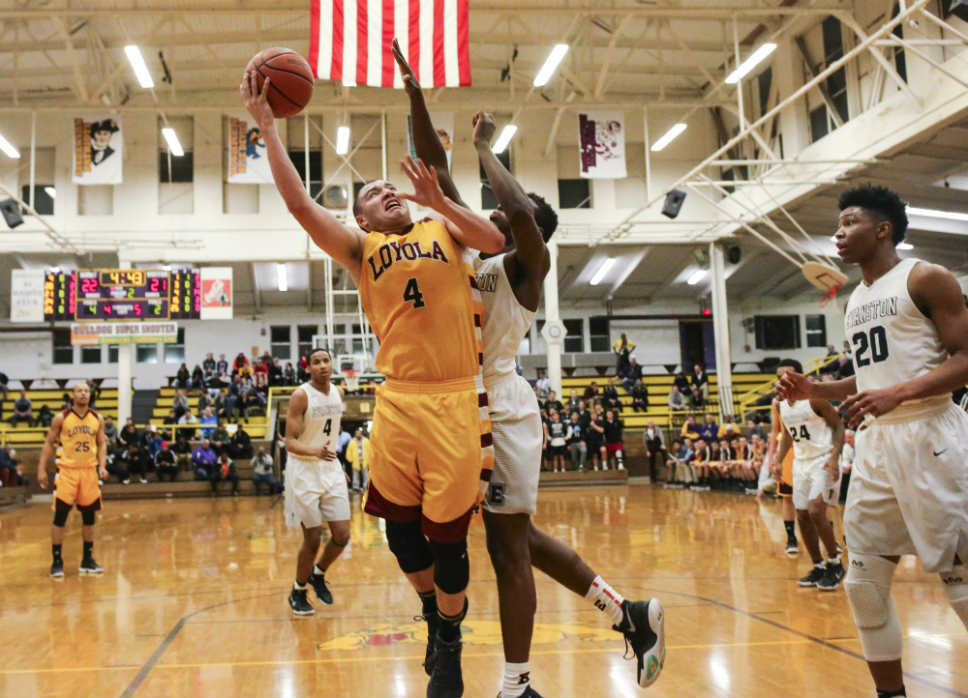 Loyola Academy’s Julian DeGuzman takes it the basket. He scored 16 of his game-high 19 points in the first half. PHOTOGRAPHY BY JOEL LERNER

The big stage was not too big for Julian DeGuzman.

The 6-foot-3 senior post player, who had been a steady performer all season for the Loyola Academy boys basketball team, got off to an amazing start in a Class 4A sectional semifinal game at Waukegan High School on March 7.

DeGuzman was DeMan, when he scored his team’s first 10 points and finished the first half of play with 16. He wound up with a game-high 19 points to go along with a team-high six rebounds.

His big first-half showing, however, wasn’t enough to carry LA (22-9) to victory. The Ramblers had a devastatingly difficult third quarter and ended up losing to Evanston 71-45.

The No. 1-seeded Wildkits (27-3), who will face the winner of the Notre Dame-Waukegan game in Friday night’s sectional final, looked every bit like a state champion.

DeGuzman, meanwhile, is looking every bit like a future college player. He certainly didn’t hurt his cause on Tuesday night.

He was the go-to guy pretty much from the get-go.

“I don’t think they expected a run like that from him,” said Evans. “I told him to keep running.

“He was fired up,” Evans added. “He started oozing with confidence.”

DeGuzman appeared to be a man on a mission, especially when he converted two hard drives down the lane. Later on, he drilled a 16-footer on top.

“I was just taking what they were giving me,” said DeGuzman, who was assisted three times in the first half by reserve guard Jack Martinus. “I kept getting open, and I just kept going with it.”

DeGuzman said that he didn’t get caught up in the crowd roar, which usually accompanies a sectional showdown.

“I didn’t pay attention to what was going on around me,” he said. “I just played the game. Just focused on the game.”

Loyola, seeded No. 4 in the sectional, could not have asked for a better first half. Thanks to a buzzer-beating three-pointer by Matt Lynch, the Ramblers trailed by one point, 29-28, at the half.

Intermission, as it turned out, didn’t do LA any favors. The Ramblers were unable to get back into the flow of things.

And there’s this: Loyola’s offense went cold, while Evanston couldn’t miss. The Wildkits opened the third quarter by stringing together 12 straight points. They wound up outscoring LA 21-7 in the frame. LA’s lone field goal in those eight minutes was a driving layup by Evans.

Then, in the fourth quarter, Evanston made six of its first seven shots to jump ahead by a commanding 21 points, 63-42, with 4:45 left to play.

“We came into this game thinking we could win,” said DeGuzman, shaking his head. 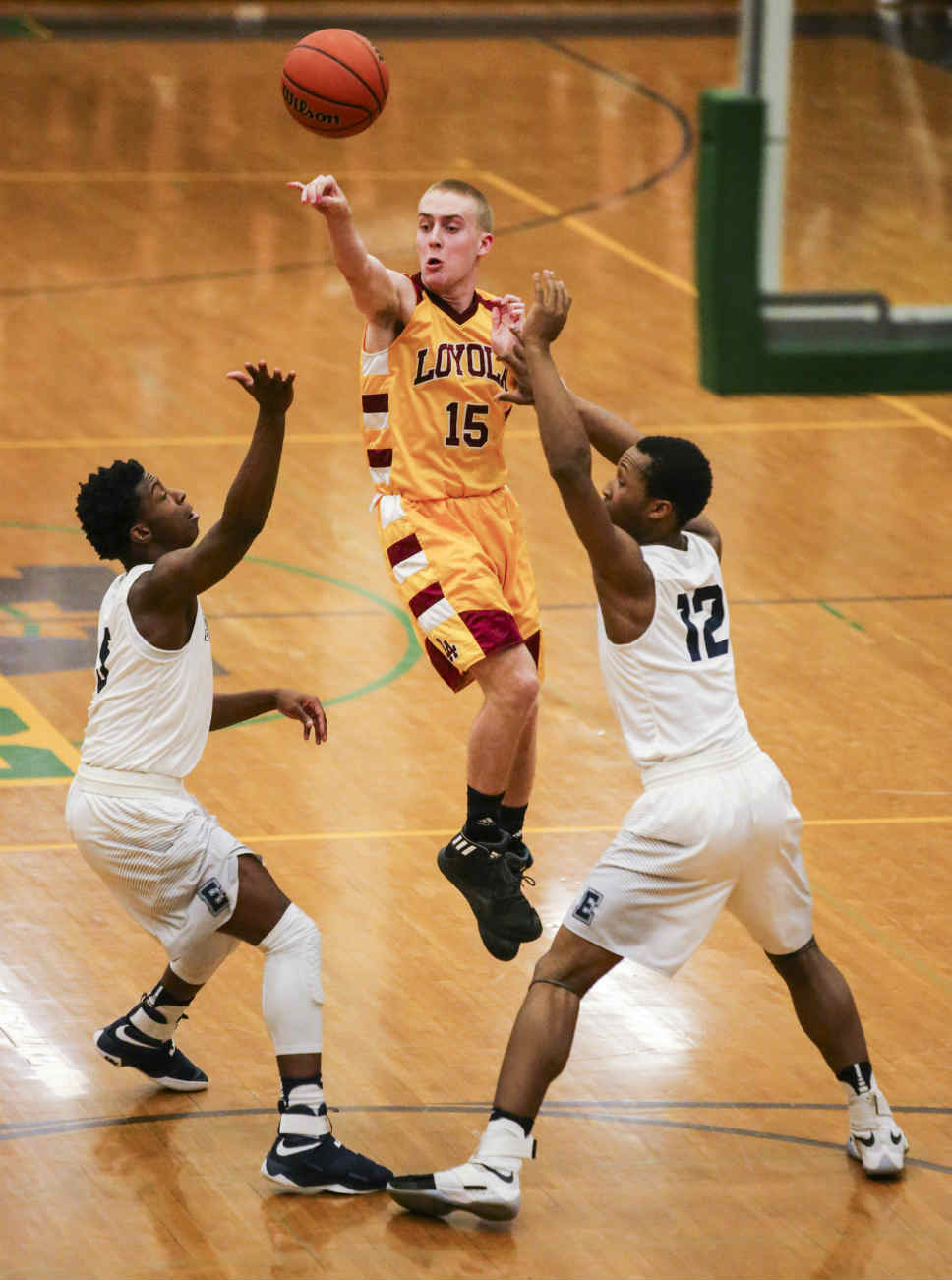 LA’s Jack Martinez lofts a pass to a teammate during the first half. PHOTOGRAPHY BY JOEL LERNER 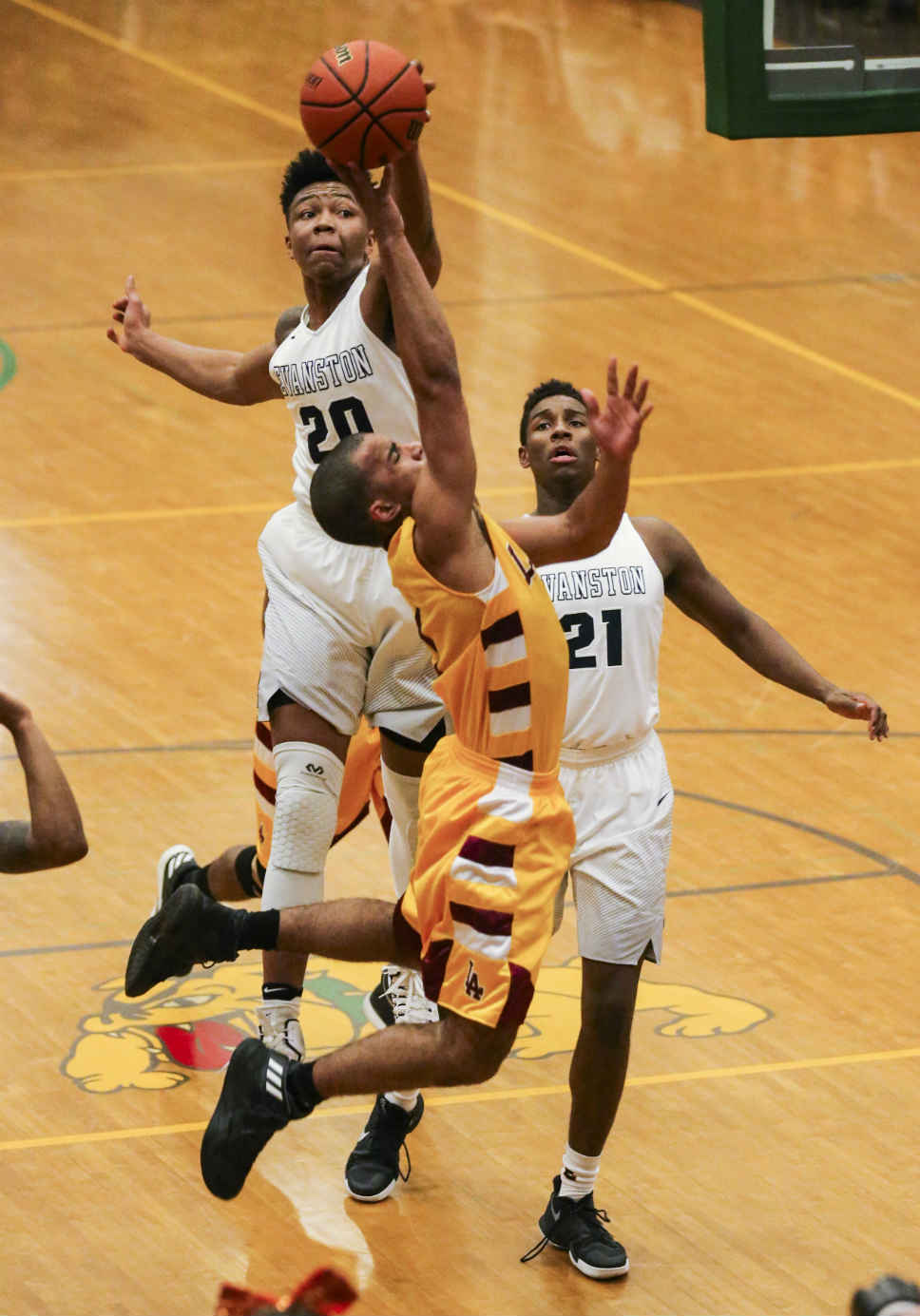 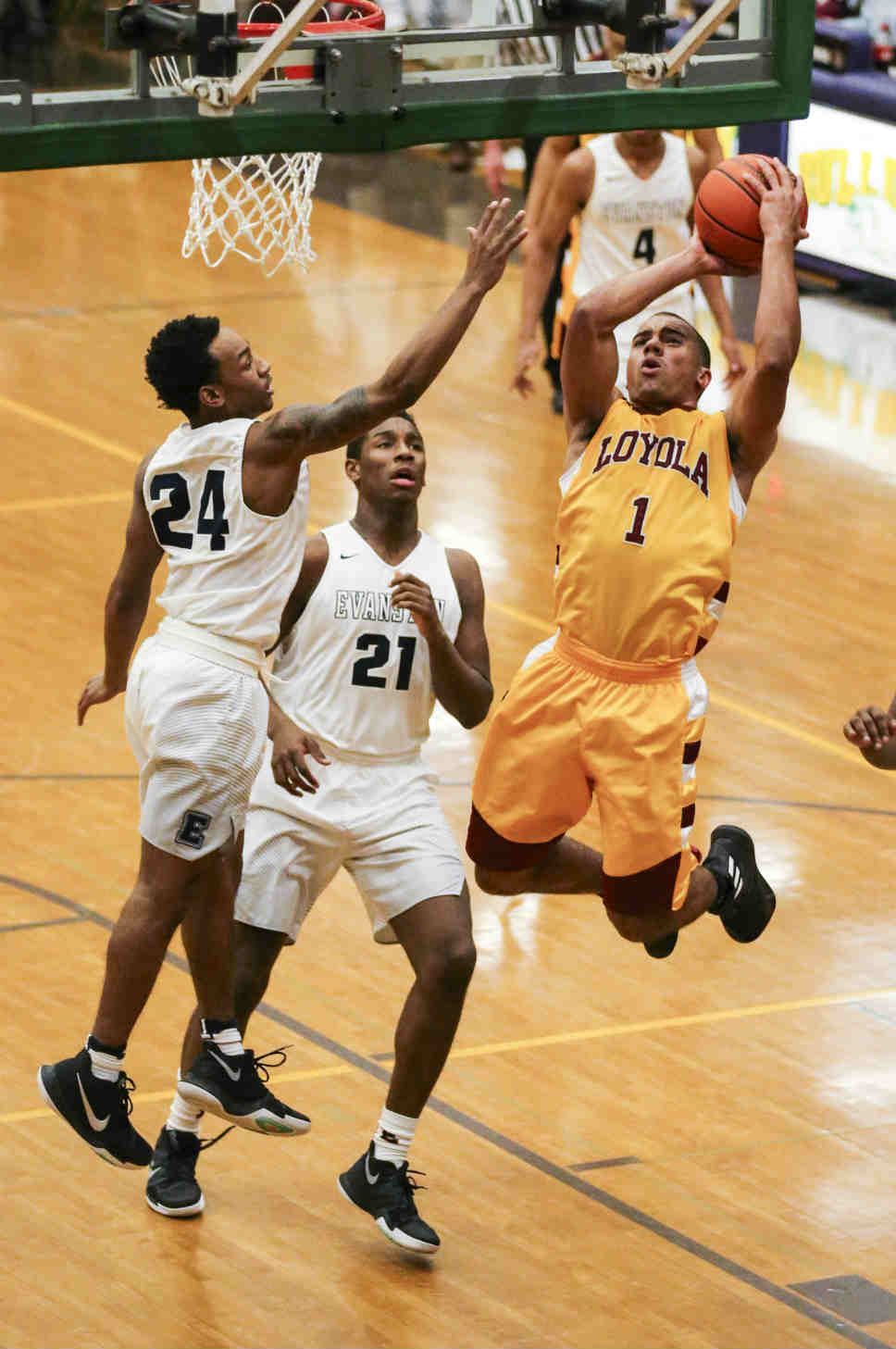 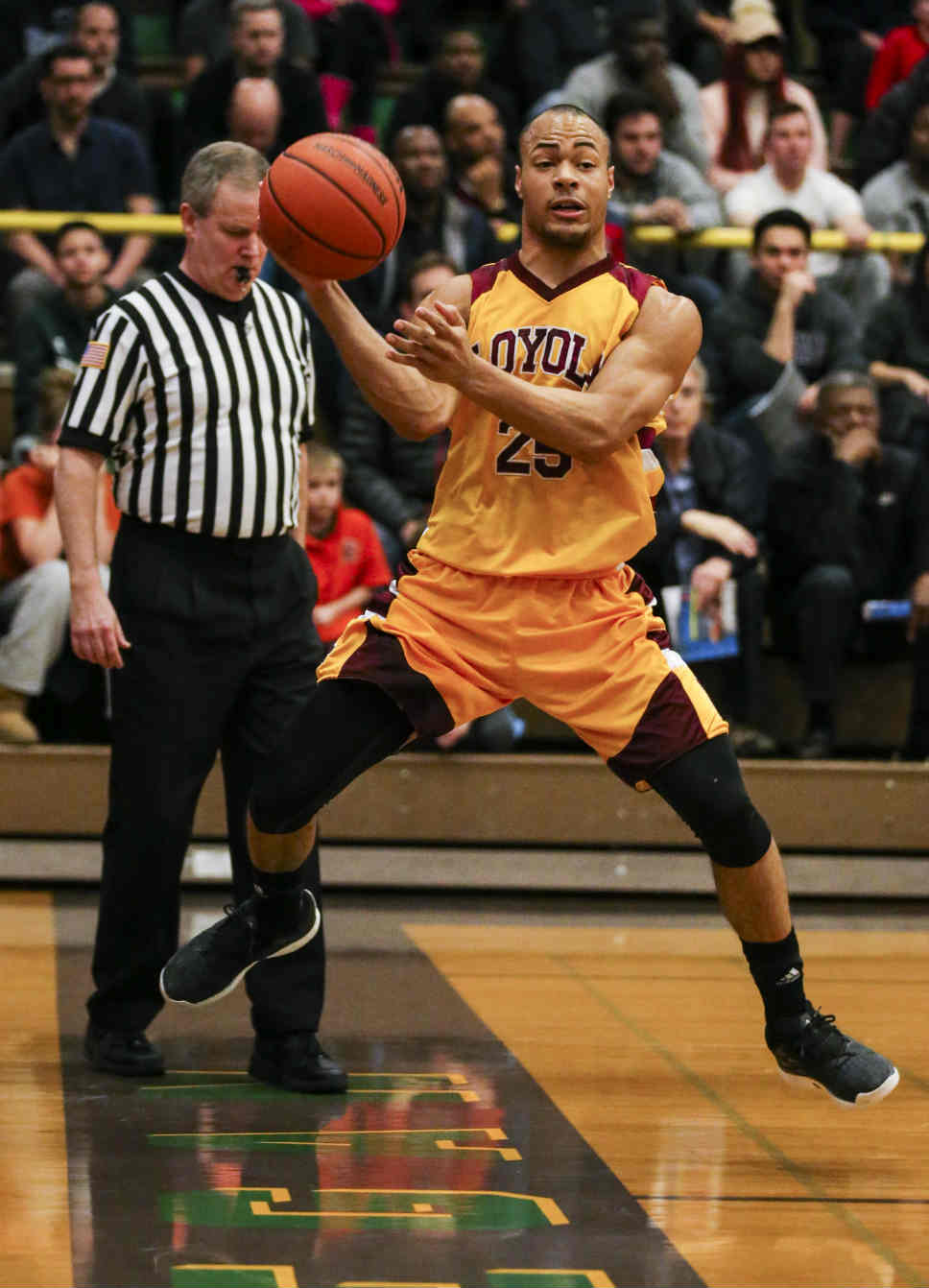 Ramar Evans of the Ramblers tries to keep the ball inbounds. PHOTOGRAPHY BY JOEL LERNER 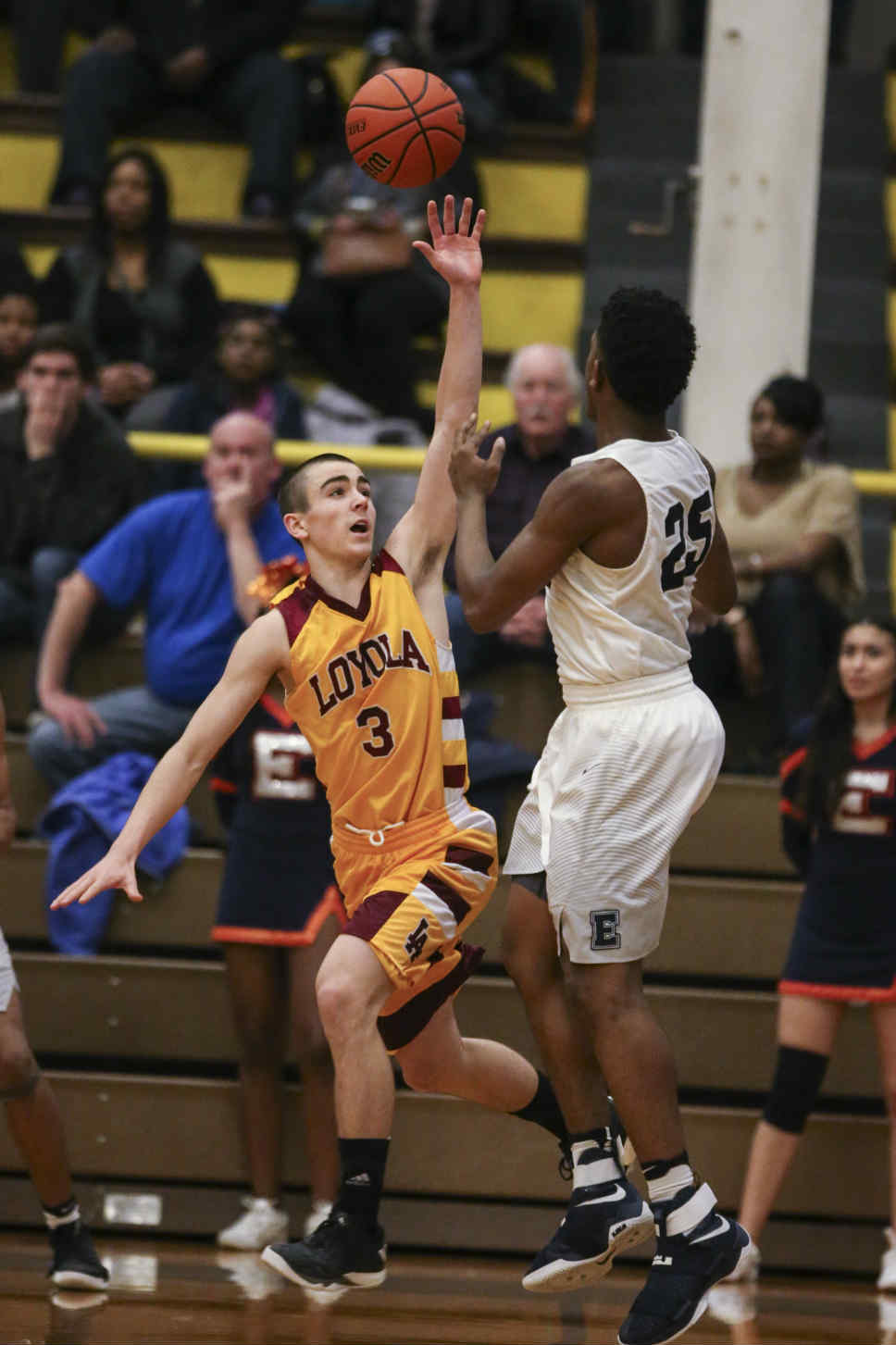 LA’s Kevin Cunningham reaches up for the basketball in front of Evanston’s Chris Hamil. PHOTOGRAPHY BY JOEL LERNER 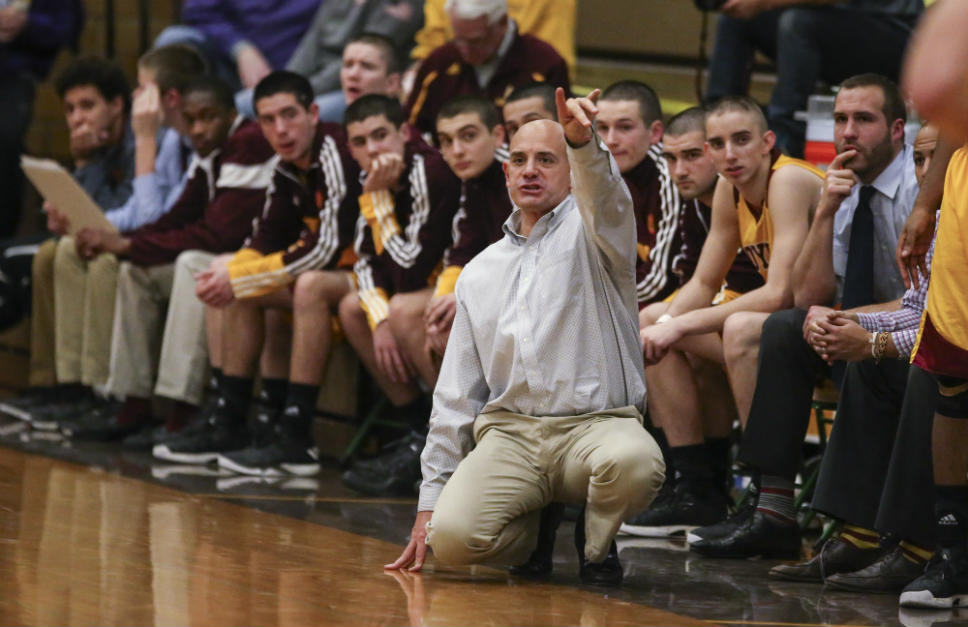 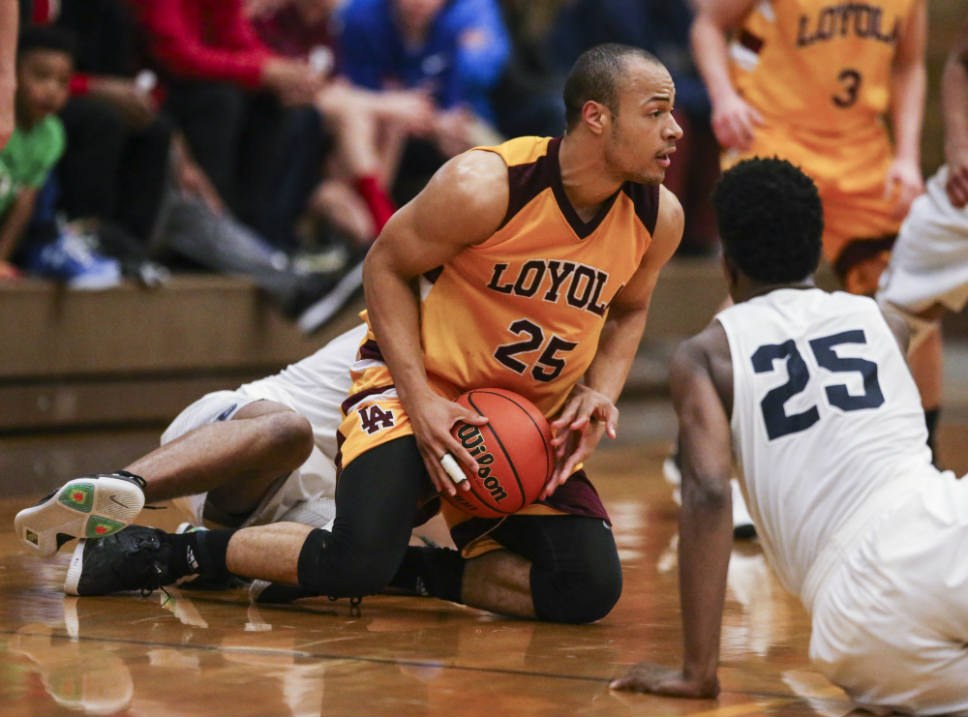 Ramar Evans looks to pass after coming up with a loose ball. PHOTOGRAPHY BY JOEL LERNER