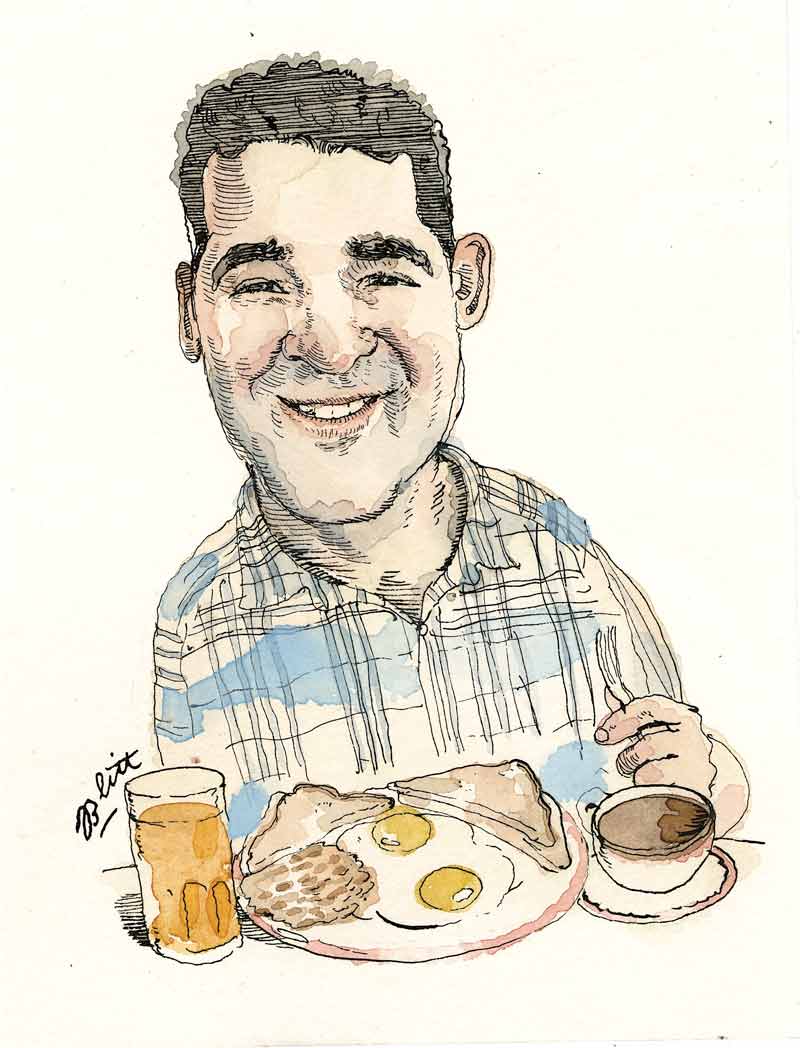 Craig Diamond was enthralled as he stared at the large photographs of former Glenbrook North High School star athletes.

The pictures adorned walls at the school in Northbrook. Each image was of an Athlete of the Year. Diamond was an incoming freshman at the time, going through orientation in the fall of 1993.

“I thought, ‘Wouldn’t it be cool to someday see a picture of me up there on a wall and maybe show it to my future kids on a visit,’ ” says Diamond, now 37, a Highland Park resident and the father — with his wife, Shani — of three children ages 9 to 12.

“Right then, I decided I’d do whatever I could to make that happen.”

As a senior at Glenbrook North in 1996-97, Diamond played baseball, football and hockey and somehow found the time to wrestle against 189-pounders. Three-sport athletes are rare these days.

Diamond was named captain in baseball and football and earned all-league and team MVP honors in both sports.

The kid who made it happen.

Diamond continues to show similar resolve in the business arena, having founded Northbrook-based Diamond MMA, a sporting equipment company that designs, manufactures and distributes sportswear and protective gear for boys and men in high-impact sports.

“Growing up in Northbrook, I was very competitive and tough, 100 percent of the time, no matter what sport I was playing,” says Diamond, whose father, Dave, reached the AAA level as a pitcher in the Chicago White Sox organization. “I went to sports camps, played in pick-up games … just trying to get better. I drew a lot of inspiration from my tight group of friends and from coaches and teachers at Glenbrook North [Mark Reborah and Jim Howie, among others] who kept me on the right path.

“My dad, he told me to watch baseball players like Pete Rose and Lenny Dykstra, hustle players who weren’t afraid to play hard at all times and dive headfirst.”

Following his years at Parkland College in Champaign, Diamond returned to Northbrook and sold security alarm systems. Before launching Diamond MMA — with help from a friend from his kindergarten days, Brian Witlin, and lead designer Alex Coriano — Diamond began work as a general contractor for a business started by his grandfather, Lawrence Zimmerman.

“When I was in college, I watched The Ultimate Fighter [TV series], and I knew I wanted to eventually start a business, maybe a side business that had something to do with mixed martial arts,” says Diamond, shortly after receiving his order of two eggs sunny side up, hash browns, wheat toast and orange juice at Country Kitchen in Highland Park.

“I noticed MMA T-shirts with skulls and flames on the front, many of them cheesy-looking. I came up with a design for T-shirts … classic-looking designs. That then led me to design fight shorts. What I really wanted to do was to design really cool sportswear for fighters.”

Diamond contacted his old buddy from his sandbox days, Witlin, a California-based designer who has lectured at Stanford University. Witlin introduced Diamond to Coriano, a San Francisco-based toy designer who wrestled for Puerto Rico in the Olympics. It was 2009, and Diamond was staying temporarily in a coach house in California and using a shed to house material for his dream business.

“We went to gyms and interviewed fighters, asking them what they wanted for gear, what felt most comfortable to them,” Diamond says. “We were cutting up yoga mats to make crude prototypes. One of our objectives was to introduce a line of shorts [and protective gear] that would allow professional fights to take place without interruptions.

“It took some time and iterations, but we developed our products and started manufacturing them in 2010.”
Diamond’s initial niche was the field of combat sports (MMA and karate), but that has since expanded to encompass contact sports like hockey, football, baseball, lacrosse and even paintball.

His favorite testimonial involves a mother of a North Shore son who loves to play hockey but abhors wearing necessary protection during games. The 13-year-old son tried a Diamond MMA creation and stopped abhorring.

“You should have heard how pleased the mother was,” Diamond says. “She told me her son forgot he was wearing our products after a game one day, while walking around a mall for a couple of hours.”

Diamond’s kids occasionally help him box the Diamond MMA products at the company’s headquarters, located on Maria Avenue in Northbrook.

“They’re learning what it takes to be an entrepreneur,” says Diamond, who trains as a jujitsu enthusiast two times a week at New Breed Training Center in Niles. He has a blue belt in the discipline.

“To inspire my kids, I sometimes do push-ups on the kitchen room floor when they’re around,” says the former

Glenbrook North Spartans superstar. “I also like to go on bike rides with the kids, fish, play the drums and walk our dog, Lady.”

Diamond takes a bite of his wheat toast.

He then becomes reflective.

“Do you want to know the moral of this story, of my business?” Diamond says. “Stay loyal to your friends from your hometown. I did, and it helped me build a network of connections … of people I grew up with, of people who share some of the passions I have.

“My friend from kindergarten proved to be incredibly helpful to me as an adult.”