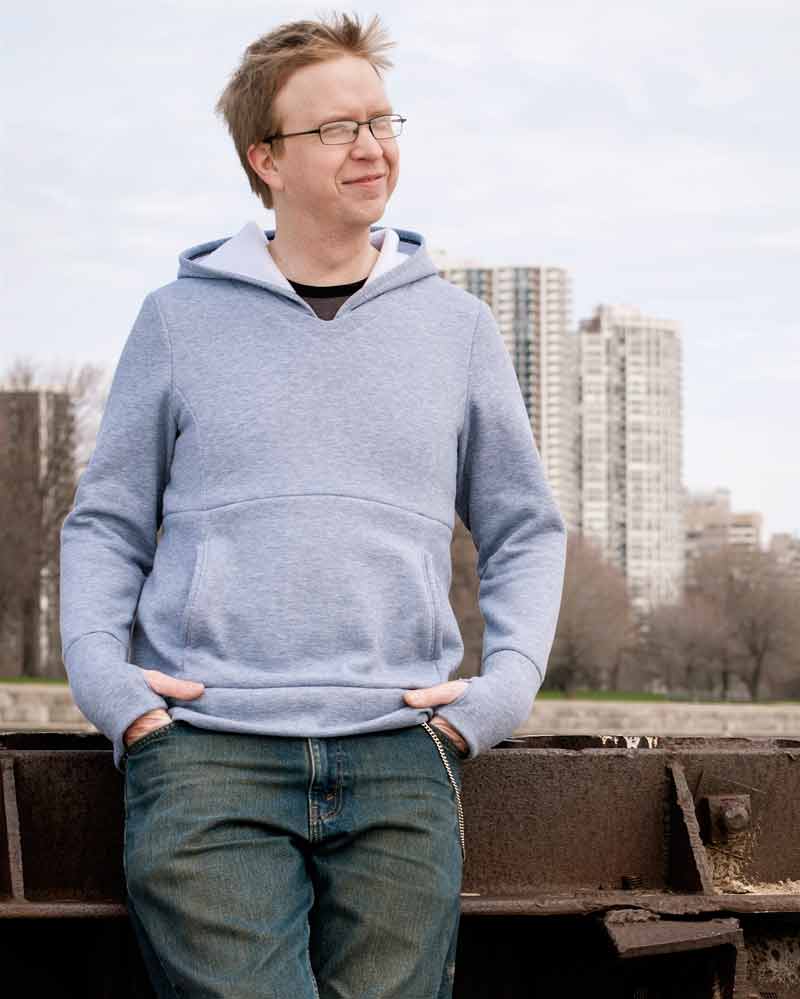 Jake Jarvi’s love for movies soared as soon as Marty McFly plummeted off a tall building in Back to the Future Part II.
Jarvi was a grade-schooler from Lake Bluff at the time, with his eyes morphing into small planets as McFly — portrayed by Michael J. Fox — disappeared from the screen to escape a threat from a gun-toting Biff Tannen.

“And Marty jumped without any regard for safety,” says Jarvi, now 36 years old, an associate editor for JWC Media and the creator, writer, director, editor, co-producer and visual effects artist of an award-winning web series, The Platoon of Power Squadron (PoPS). In the series he also portrays Jonas, a blue-collar 20-something with superpowers.
McFly survived, thanks to a DeLorean time machine.

“I remember thinking, ‘You only get to do that in movies,’ ” adds Jarvi, who moved recently to Wilmette. “I love knowing you can come up with an idea you think would be cool if it existed and then, after hours and hours of work, seeing it.”

The world premiere of the 10th and final episode of The Platoon of Power Squadron takes place at the Music Box Theatre in Chicago on March 4 at 9:30 p.m. The first episode ran in 2009. The cast also includes Jarvi’s wife of seven years, Lake Bluffian Eliza Toser.

“Four characters in the series started as people in their 20s, trying to figure out what they’re supposed to do with their lives,” Jarvi says. “They all have superpowers. My character has unlimited powers. But I also have a superhero’s weakness — I’m too apathetic to do anything about my limitless powers. Superheroes can be super complicated, fallible, human.

“The first episode lasted 20 minutes, with the other nine running about an hour each,” he adds. “The quality of the series goes up as both the people in the series and the people behind the camera take life more seriously.”

PoPS was recognized in seven categories — including Best Directing, Best Ensemble and Best Producing — at the LA Web Fest in 2013, and it won Best Series at the 2013 Gen Con Film Festival in Indianapolis. In 2015, it was nominated for a Streamy Award (Best Indie Series).

“PoPs was a hobby for me from the start, something I loved to do after work,” Jarvi says. “I didn’t make a dime from it. All of the money went to our crew, to equipment, to location fees and permits. It did not start making money until the fifth episode.”
Jarvi, a 1999 Lake Forest High School graduate, met his wife, Eliza, while working in Center Video in Lake Bluff.

Years later, Jake and Eliza went on their first date in Los Angeles, Jake’s home for five years. They saw a movie, Eternal Sunshine of the Spotless Mind.

“A movie,” says a chuckling Jarvi, “about relationships crumbling.”

Mr. and Mrs. Jarvi review restaurants together, and their words in “Dinner Date” pieces serve the readers of JWC Media magazines, including Sheridan Road and Evanston. Jake also writes feature articles and profiles and edits video for all JWC Media outlets.

“I get to talk to so many different people,” Jarvi says of his busy day job. “I love the variety. These are people who are passionate about what they’re doing.”

The forever-boyish Jarvi is passionate about movies … in spades. Why else would he host movie marathons at his home? One featured all 12 of the flicks in the Friday the 13th franchise. In another, Jake and his guests sat through all eight Nightmare on Elm Street movies.

“I love horror movies, can’t get enough of them,” says Jarvi, who appeared as an extra in non-horror movies Old School (2003) and Master and Commander (also 2003). “To me, they’re fun. But there’s footage of us watching all of those Friday the 13th movies, from 8 in the morning one day until 5 in the morning the next day, and on YouTube you can watch me deteriorate on a couch more and more with each movie; they kind of get more and more boring there at the end.”

For ticket information about the finale of The Platoon of Power Squadron on March 4, visit musicboxtheatre.com or call (773) 871-6604. The web series will be released on the PineappleBoyFilms YouTube channel on March 12.