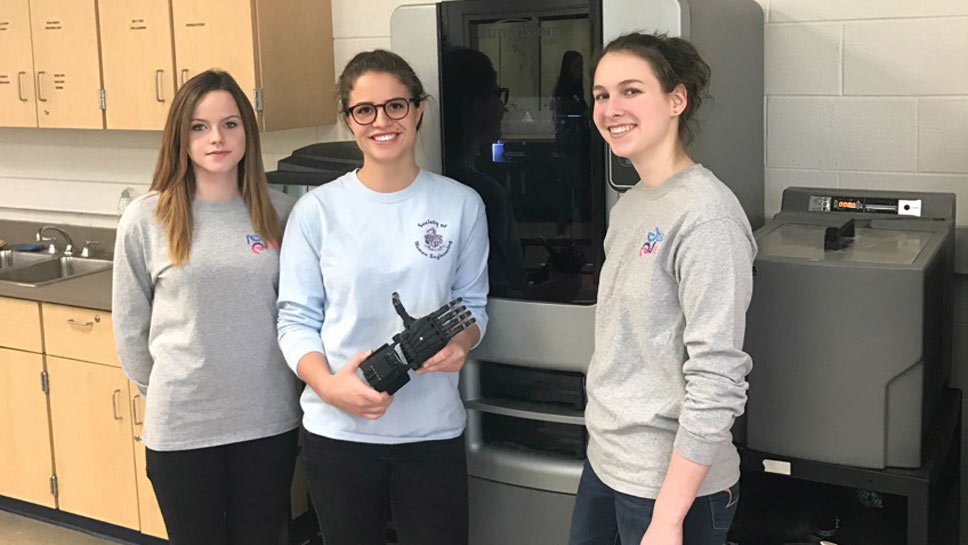 Maryna Sybirtseva, Abigail Coleman, and Elaina McIlvain of the Society of Women Engineers

Since childhood, many of us have been taught the kindness of lending others a hand. The Glenbrook South High School (GBS) chapter of the Society of Women Engineers (SWE) knows that it’s even kinder to make one from scratch and give it for keeps.

The Society of Women Engineers is an after-school club designed to bring together female students, grades 9 through 12, who are interested in engaging more fully with the E in STEM+ courses. They meet every week during the school year and learn about different specialties within the field of engineering.

“We started it because there’s a shortage of females in STEM related fields,” says Applied Technology Teacher Michael Sinde, also the SWE club sponsor. “We were seeing four girls in one class, three in another. We want them to have the chance to work together and share their experiences and let them know they’re not alone.”

Once a month, SWE has a female speaker address the group. One particular GBS alumni came to describe her job as a mechanical engineer for Tesla while visiting from California.

While exploring the field of biomedical engineering, a guest speaker described the major impact her prosthetic leg has had on her life. That’s when the SWE students with a particular interest in biomedical engineering first reached out to the e-NABLE Community, a online grassroots organization that connects people in need of upper limb assistance devices with willing engineers all over the world who make open-source, 3D printed prosthetic hands and arms.

“It’s a way to really involve new and improved technology into the art of prosthetics and makes it accessible to everyone,” says Abigail Coleman, a junior at GBS and vice president of the SWE, who asked to take a lead in the e-NABLE project. “I thought it would be a really good project for us, and we could learn more about the basics of engineering through 3D printing.”

The e-NABLE site currently has plans and instructions for eight different designs of wrist-powered prosthetic hands with names like Raptor Reloaded, Cyborg Beast, and Flexy Hand. They have two designs for prosthetic arms that are powered by bending the elbow.

Once Coleman and partners, Maryna Sybirtseva and Elaina McIlvain, chose a hand to print, they also ordered a package of supplies from e-NABLE that would help assemble and outfit the finished hand, like screws, Velcro, padding, string to actuate the fingers, and grips for the fingertips.

After downloading the plans, they scaled them to size and printed the parts using the school’s main 3D printer as well as two smaller scale versions called MakerBots. They shipped the finished hand to e-NABLE to be sent to someone who will make good use of it.

After there first successful run, the young biomechanical engineers thought they’d take a second run at it, this time, with a known recipient waiting on the other end. A young girl from California contacted them and is now sending them measurements so they can customize a hand specifically for her needs.

“There are not as many women in the engineering field, and I think it’s important to show girls, not only at our high school but around the world, that they wouldn’t be alone in engineering,” Coleman says. “There is a community that they could be a part of. Engineering is for everyone.”