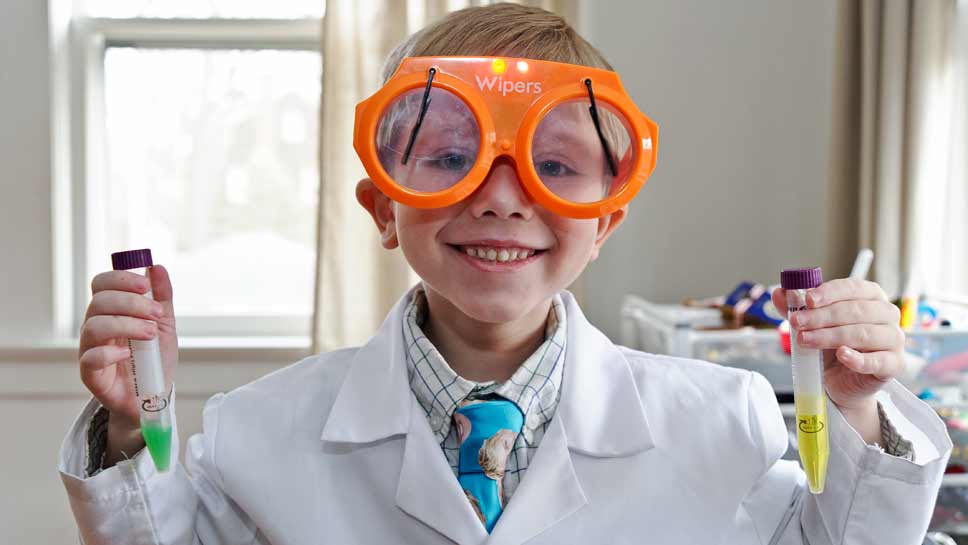 Six-year-old Nate Butkus is all about eye safety while conducting scientific experiments in his Wilmette home laboratory. PHOTOGRAPHY BY GEROGE PFOERTNER/JWC MEDIA 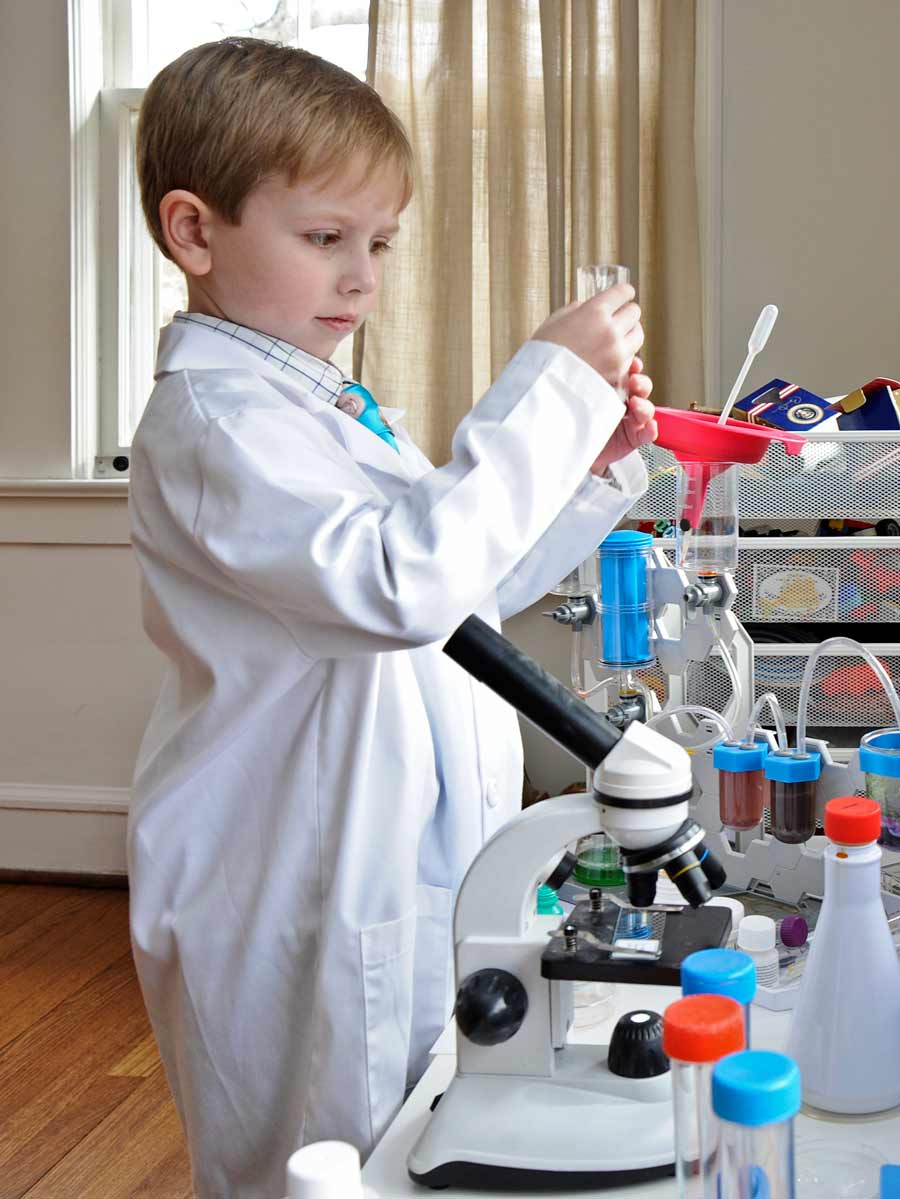 WILMETTE – Nate Butkus has been passionate about science for more than half his life. His interest started when he was just three years old, and now, at age six, this budding scientist has his own podcast, where he asks science experts questions on topics he finds interesting.

“Sometimes I come up with people I want on the show and my dad works on finding them,” Butkus told DailyNorthShore.com. Recent show topics include alphanatomy, climate change, evolution, ants, butterflies, vultures, radiation … and sugar. To name a few. (The free podcast can be found on iTunes here.) “I have already harvested some living cells,” he told one of his guests.

It helps that Nate’s father, Eric Butkus, creates podcasts for a living for The Journal of the American Medical Association. One day Nate was visiting his father’s office and decided that he wanted to make his own podcast and call it The Show About Science. Nate’s first interview? His mom, Jenny Butkus. Nate said he peppered his mom with the same question over and over. “What else do you know?” he asked.

Since then, Nate’s questions have evolved and so has his podcast. He’s branched out from family friends with science backgrounds to experts in the field such as Anna Rothschild, creator and host of the PBS YouTube series Gross Science. Nate gets many of his ideas from watching videos on the internet and sometimes his parents pitch their own ideas. But Nate has final say over what is on the podcast.

“Ultimately, Nate has to be excited about it. If he is not excited, then it is not going to be a good show,” Eric said.

The family has dedicated a spot in their house where the podcast is recorded, and Eric edits the footage during his commute to and from work. He helps Nate by contacting scientists and finds that most are receptive.

“It is just so cool because everyone is so wonderful and generous to Nate,” Eric said. Nate said he likes learning about new science topics from experts but doesn’t come up with specific questions ahead of time. “I pretty much do not prepare. I come up with the questions out of the blue. It makes for a better interview,” Nate said.

Nate recently sharpened his interviewing skills on the other side of the table. On January 25, he was interviewed on The Ellen DeGeneres Show about his podcast. NBC producers had heard Nate’s podcast and contacted him to see if he was interested in being on the television show. His mom said Nate was enthusiastic. “He is fearless,” Jenny said. “He feeds off the audience. He just loves it.”

Indeed, Nate charmed DeGeneres and the live audience. And he wasn’t nervous about being on television. “It was awesome to be in front of a big audience,” he said.

But he said his parents were a little bit nervous and were making funny faces at him from their seats in the audience. “They did not know what was going to come out of my mouth because they couldn’t correct me,” Nate said.

DeGeneres was just how he expected. “I expected for me to be excited and for her to be silly and she was super silly. She gave me a tie with her face on (it). I call it an Ellen tie,” Nate said.

His parents confessed they were a little nervous before he was on the show. Just like the podcasts, Nate came up with everything himself — his parents never know what questions Nate will ask during an interview. “I had no idea what to expect when he walked on that stage,” Eric said.

Nate has just released his 25th episode of The Show About Science. His parents are proud of his hard work and pleased he has an arena to explore his love of science. 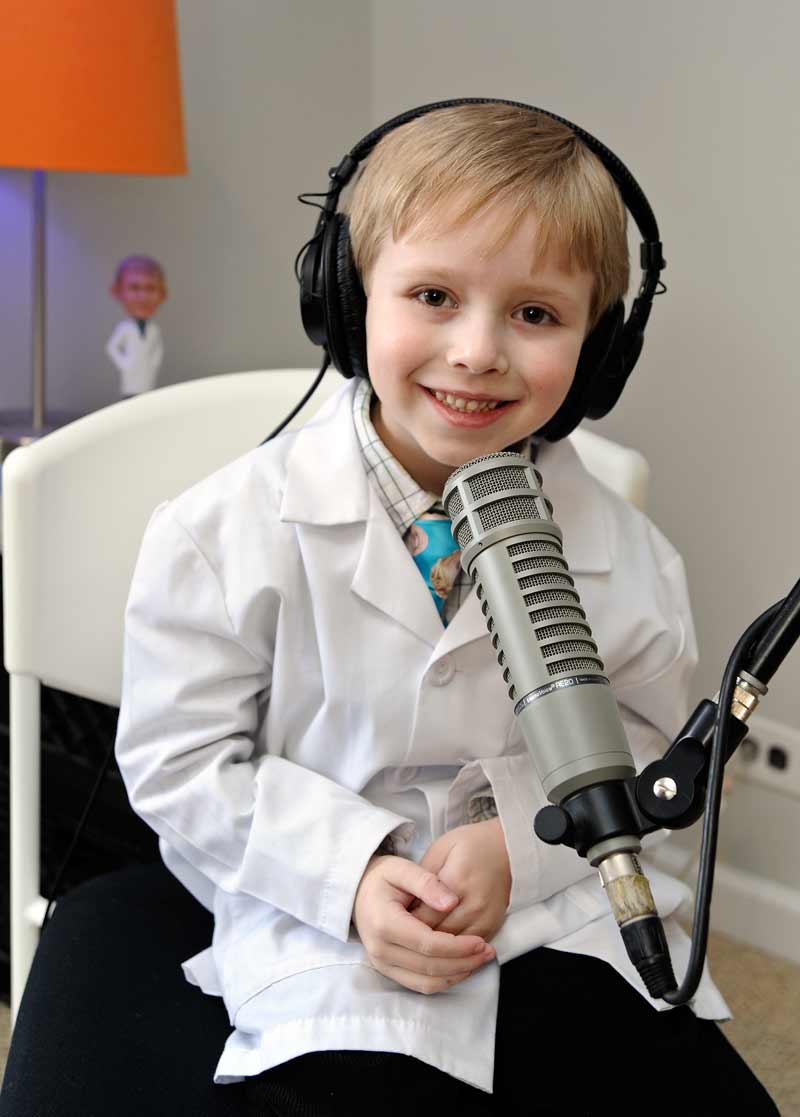 Nate and his parents set up a space for his podcast in their Wilmette home. 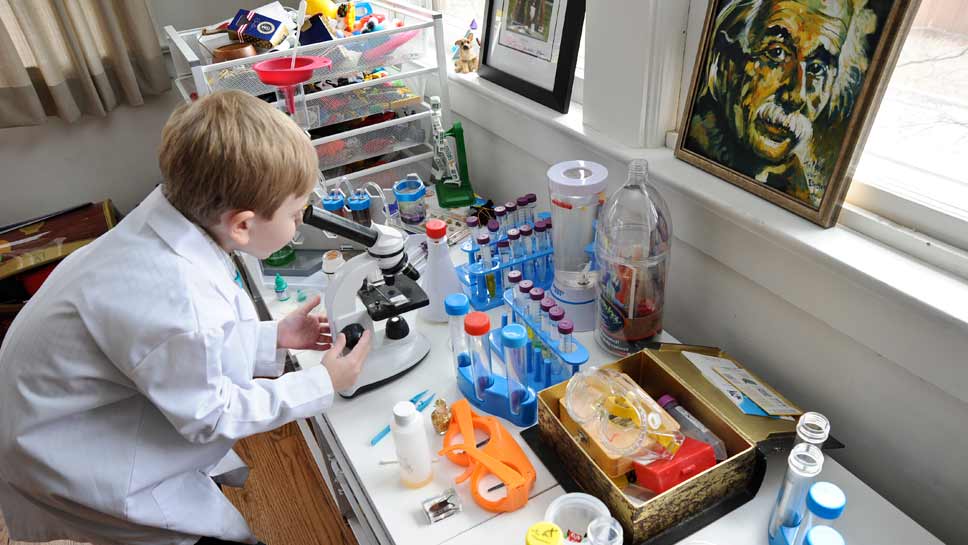 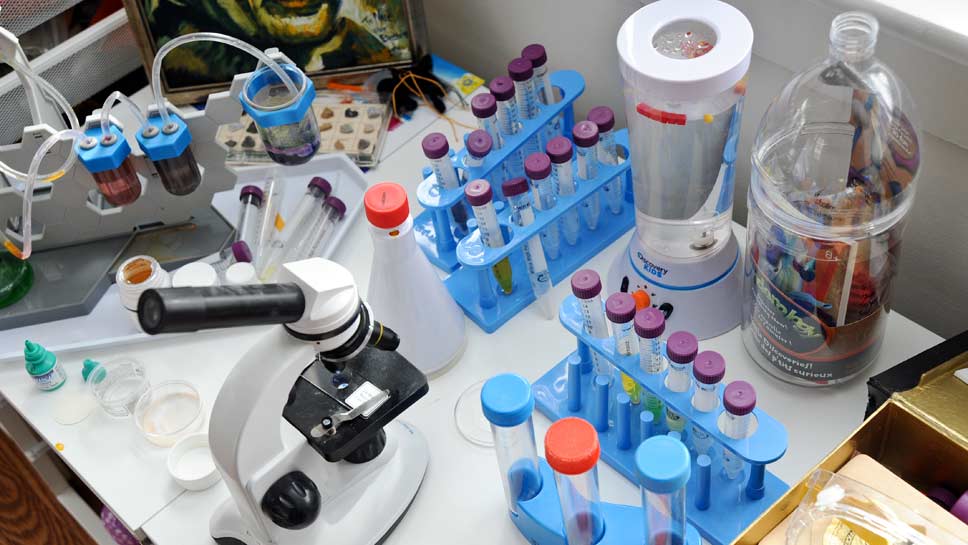