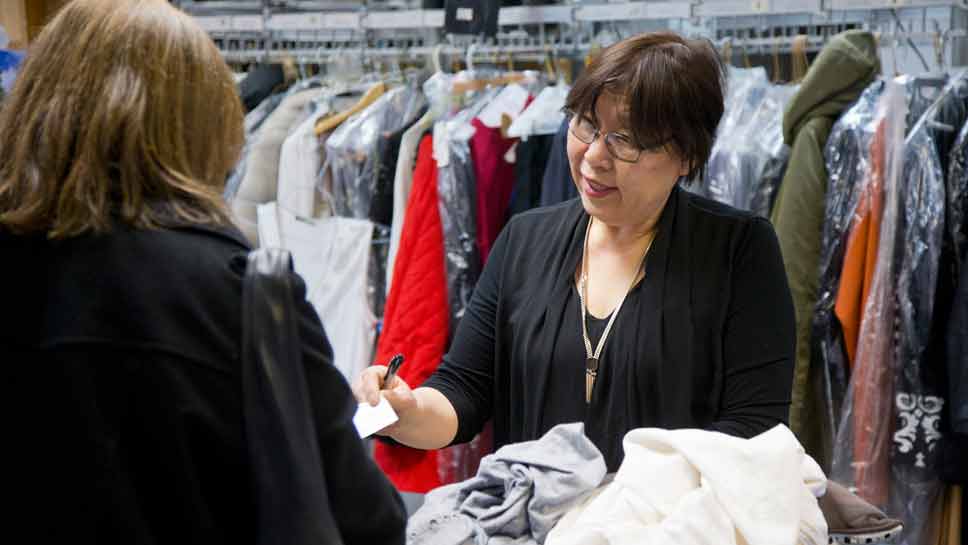 HIGHLAND PARK – Growing up in South Korea, Kyong Koepp faced discrimination for being disabled, but she fought seven years for the American dream and found it in Highland Park.

Kyong had difficulty finding a job in South Korea until her uncle, a manufacturer, hired her as a tailor.  One day her uncle’s supervisor called her in and he asked her how she got the job there. Kyong explained that her uncle hired her, but the supervisor told her that his company didn’t hire “handicapped” employees. He said that he was not going to fire her, but that she could not work there.

“He hurt my heart so much and even though he didn’t fire me I quit,” said Kyong who was 17 at that time and still facing ramifications from contracting polio at the age of five. “The U.S. had the vaccine at the time, but they didn’t have it in South Korea.” Her mom took her to several doctors in South Korea, but to this day she still walks with a limp.

After Kyong lost her job, she didn’t let her emotions get the best of her and she soldiered on. She found another job and continued to work hard at her craft until she opened Kyong’s Tailor Shop at 2250 Green Bay Road #5, in Highland Park.

Kyong grew up with three sisters and two brothers and explained that her family was very poor, as she was born after the Korean War and “most people didn’t have much.” After she learned skills in the tailor shop she started earning some money, but she was self-conscious about her appearance.  “I was a pretty girl who limped and was handicapped,” she said. “I wanted a better life and I wanted to make money.”

Kyong said she was 19 when she decided to immigrate to the U.S. but the visa process took such a long time that she didn’t arrive in Chicago until she was 26-years-old. Kyong’s sister’s husband served in the military and his base was at Fort Sheridan, so he brought her to Highland Park after they were married. Several years later, Kyong’s mother joined her daughter and son-in-law, and after she became a U.S. citizen, she sponsored Kyong thus enabling her to make the journey in 1982.

Kyong explained that when she came to Highwood, her brother-in-law saw the opening for a tailor at Skokie Valley Laundry/Dry Cleaners. He took her there for an interview and she got the job. During the interview Kyong was asked what she could do and she replied, “Everything.”

Kyong said she spoke some English before she came here, because she took an English class every morning in South Korea, and she could comprehensively read English. But she had trouble understanding people unless they spoke slowly, so she enrolled in an English class at Highland Park High School to become more fluent in the language.

“It was a level three English class and the teacher would have each student read one sentence aloud from the newspaper,” she said. “There were students from all different countries who were placed in the class and I’ve kept in touch with some of my classmates.”

Kyong’s two brothers and another sister also immigrated to the U.S. and settled nearby. However, one sister remained in South Korea with their father and Kyong helped support them. Her sister continues to live in South Korea, but often comes to visit.

Kyong said South Korea had a lot of matchmakers, but she didn’t want to get married in South Korea. She met and married her husband in Highland Park almost 30 years ago. The Koepps have a 23-year-old son and a 17-year-old daughter and currently live in Lincolnshire.

Kyong worked hard to fulfill her dream of opening  Kyong’s Tailor Shop  on March 1, 1990. Kyong does alterations, makes draperies, works with patent leather and can even design clothing from scratch. “I can make dresses and suits, but most people don’t want to do that today, because it’s too expensive,” she said. “I was going to go into the garment business for designing, but the designing business is so slow and I don’t have the cash flow.”

Though Kyong works a lot of hours she admits that she loves her work. “I’m a very good fitter and I can handle anything because of my experience in South Korea.” In an effort to accommodate her customers, smaller jobs like hemming pants can often be ready the same day.

She still has customers who have remained with her since her days at Skokie Valley Laundry/Dry Cleaners. “I value my customers at Kyong’s Tailor Shop and I have a good relationship with them,” she said.

This story is part of an ongoing DailyNorthShore series on businesses on the North Shore. Kyong’s Tailor Shop is located at 2250 Green Bay Road #5. For more information call 847/ 432-2221. 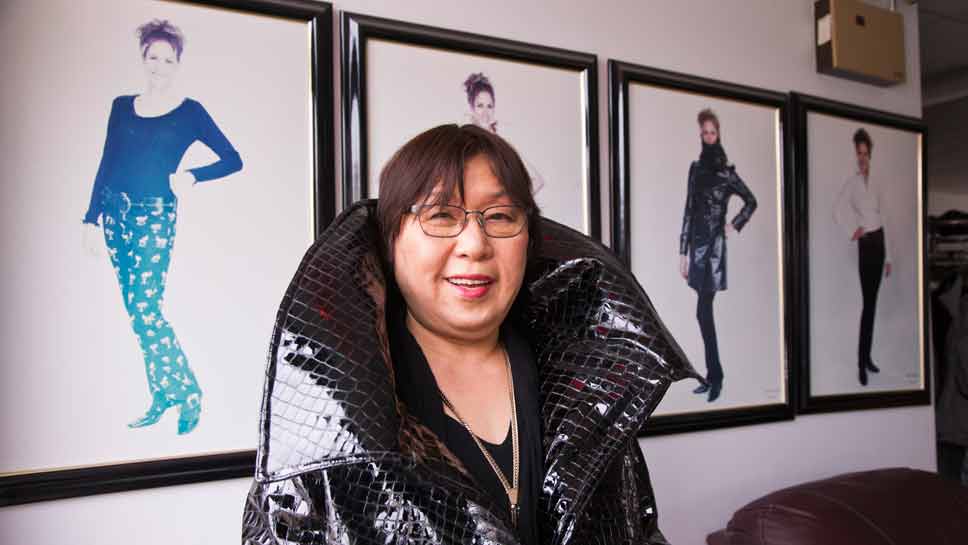 Kyong Koepp of JKK Design wears one of her designs with photos of other of her original designs in Highland Park. PHOTOGRAPHY BY JOEL LERNER/JWC MEDIA 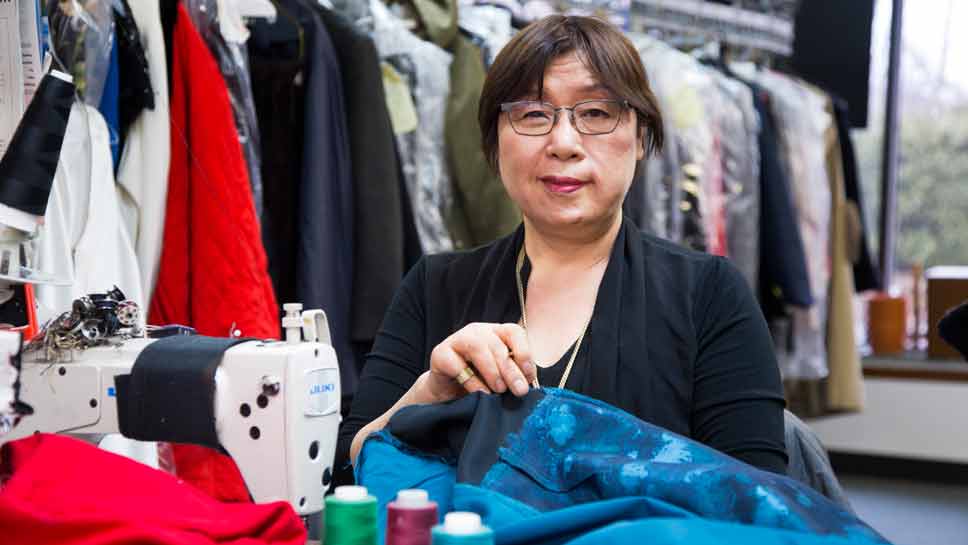 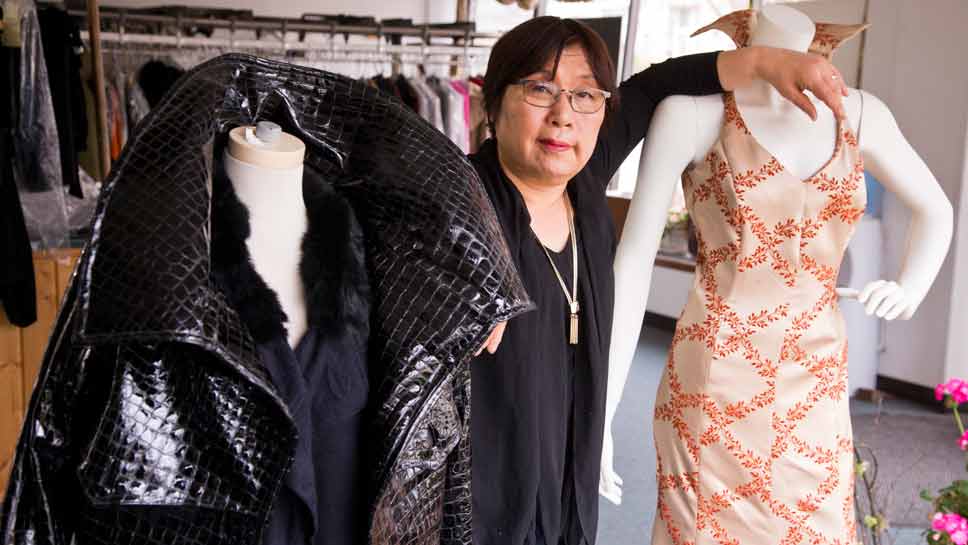 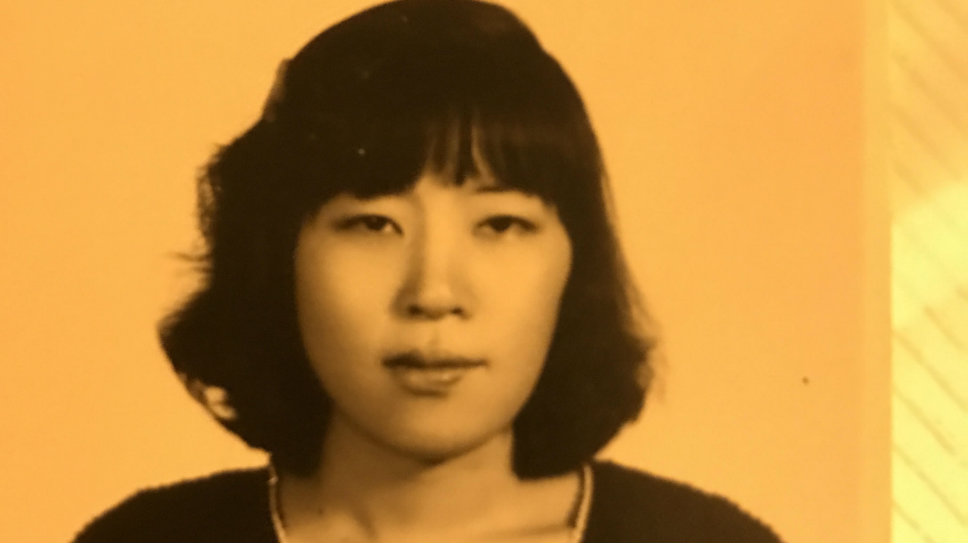