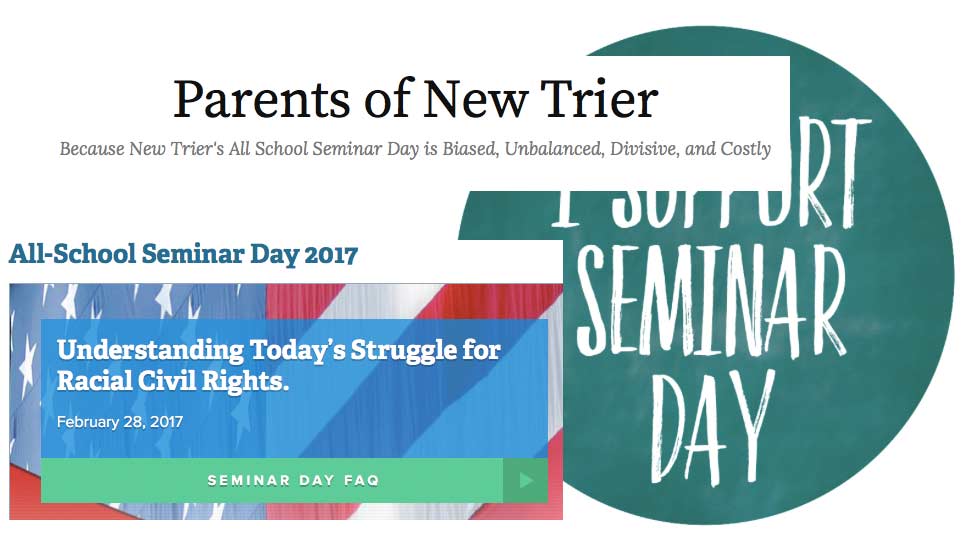 Top left: title from the website for Parents of New Trier, which seeks changes to the Race Day lineup. At right, logo for a petition in support of the high school’s Seminar Day on Race. Bottom left, an image about the event from New Trier’s website.

“As citizens, parents and community members, let’s show the New Trier School Board we support Seminar Day and our educators. We recognize these conversations may not be easy, but they are important,” reads the website in support of the program. The site includes a petition that will be filed with the school board.

The petition was started by a group of parents and residents who were concerned about the vocal opposition on a seminar they view as important, a group representative told DailyNorthShore. After brainstorming, the group decided a petition was a simple way for people to express their support of the event to the school board. As of Feb. 7, more than 3,000 people had signed the petition.

Carol Callahan, a Wilmette resident whose daughter is a sophomore at New Trier, signed the petition in support of the program. “My daughters found New Trier Seminar Day an eye-opening experience. They gained insight into how our history as a nation of immigrants of all races and religions continues to impact us today. The array of subjects covered by dozens of speakers prepares them for study, work and living among people with different backgrounds and experiences, whatever path in life they choose,” she told DailyNorthShore.

The group opposing Seminar Day created a website and Facebook page called Parents of New Trier, detailing their concerns. The tagline on the website is “Because New Trier’s All School Seminar Day is Biased, Unbalanced, Divisive, and Costly.”

Parents of New Trier maintain that Seminar Day lacks speakers with varying points of view who may offer solutions to real world problems, such as gang violence in Chicago. The group has proposed alternative panelists on their website such as Jason Riley, a Wall Street Journal columnist, Milwaukee Sheriff David Clarke, or NFL football player Benjamin Watson.

Betsy Hart, a New Trier parent who is a spokesperson for the group, told DailyNorthShore that Parents of New Trier is forming as a 501(c)(3) nonprofit with plans to be a voice for people in the community, bridge divides and make a difference in a tangible way. On Feb. 26, Corey Brooks will speak at a private home about his work with Project Hood, an organization working to end violence and build communities in Chicago.

“Our issue is not at all with Seminar Day in talking about race. It is the world view that it is coming from,” Hart said. Hart said the group’s concern is that the focus is not on real solutions, but rather workshops that she and others in the group view as divisive and politicized. “It doesn’t take courage to talk to New Trier students about white privilege. That’s not courage, that is a cliche,” she said.

The theme of Seminar Day is “Understanding Today’s Struggle for Racial Civil Rights.” The New Trier website states: “The goals for the day are to help students better understand how the struggle for racial civil rights stretches across our nation’s history, that people of diverse racial backgrounds were involved in each chapter in this history, and how previous civil rights movements connect with the issues that we are discussing today.”

Students will have the opportunity to choose from 100 workshops presented by New Trier staff, student groups and experts from the Chicago area. The workshops range in topic from discussing representations of people of color in various forms of media to analyzing western bias in the field of science.

In addition, two keynote speakers are scheduled to speak at each campus. Colson Whitehead, award-winning author of The Underground Railroad, will speak at the Winnetka campus, while Andrew Aydin, co-author of the award winning graphic memoir series MARCH about congressman and civil rights leader John Lewis, will speak at the Northfield campus.

This year isn’t the first year New Trier has held a day-long program focussed on race. Last year the school held a Seminar Day on Martin Luther King Day, featuring Isabel Wilkerson, author of The Warmth of Other Suns, and a special presentation by Malcom X’s daughter Ilyasah Shabazz.

Moving forward, many parents and residents who both support and oppose this year’s Seminar Day plan to attend the New Trier school board meeting scheduled on Feb. 20 to share their views.