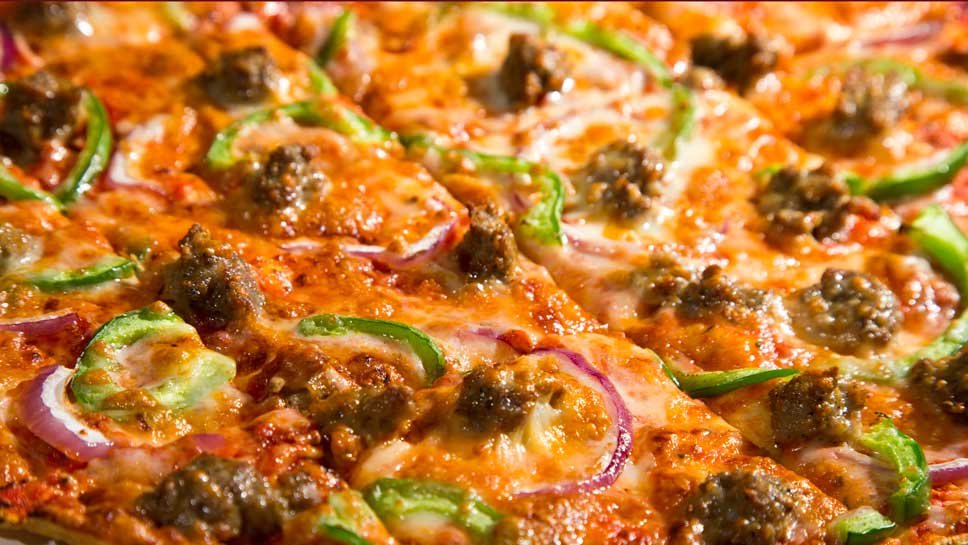 Sausage pizza with Provel cheese, which is a combination of cheddar, swiss and provolone, at Sauced at in Lake Forest. PHOTOGRAPHY BY JOEL LERNER/JWC MEDIA

LAKE FOREST — After a career where he climbed near the top of the food service industry’s corporate ladder, Craig Grimes of Lake Forest spent a year as a serious student of pizza.

Once his education was complete, Grimes opened Sauced Pizza in October offering home delivery and carry-out orders of pizza and more in Lake Forest. Customers get a variety of choices when it comes to crust, sauce and ingredients.

Before an order is complete, the customer selects from a pair of crusts, five sauces, a minimum of 22 toppings ranging from a basic pepperoni to pineapple or jalapenos and four sizes, according to Grimes.

Raised in the St. Louis area, Grimes had an early exposure to the food service industry. Owning his own business was always a dream. He got a lot of on-the-ground as well as formal education on the way to opening Sauced Pizza.

“Restaurants are a way of life in St. Louis,” said Grimes. “I started cooking at a very young age and grew up working in restaurants. I bused tables, waited tables, bartended and managed.”

More than 20 years ago, Grimes joined the Levy organization and moved to the Chicago area. He landed in Lake Forest 10 years ago as was a regional vice president in charge of the restaurant division. When he joined the company it grossed $30 million annually. When he left its’ sales were $1.5 billion.

While working for Levy, Grimes was asked to join the board of directors of Nature Foods, a vegan restaurant chain. When the company was in need of strong leadership, he was asked to become its CEO. He took the job.

Grimes Decides To Open His Own Business

After a few years with Nature Foods, Grimes decided it was time to open his own business. He had to decide what kind and make sure he knew everything there was to know about it before taking the plunge. Pizza was a natural choice.

“Pizza is always what comes up when it’s family meal time,” said Grimes. It was time for his pizza schooling.

Returning to his St. Louis restaurant roots, Grimes got in touch with a friend who owns Imos Pizza there, spending much of his time working most of the jobs that need to be done in a pizzeria. It has 92 locations mostly in Missouri. Many of them are franchises.

After immersing himself in Imos’ way of doing things, he contacted another friend who operates 142 Pizza Huts in Texas and learned as much as he could there as well. He said it was vital to opening Sauced Pizza.

“It’s critical to have an appreciation of what everyone contributes to the success of a restaurant — from the guy who takes everything to the dumpster to the person who makes the dough,” said Grimes. “It takes a team not an individual.”

Sauced Pizza’s customers get a lot of choices when selecting a pizza, which include the standard menu to the artesian pizzas that are offered as specials each month, such as Chicken Florentine or barbeque bacon chicken.

Customer Gets an Abundance of Choices

Once customers choose between the crispy thin crust or the traditional hand-tossed variety, they pick one of five sauces—traditional red tomato, white Alfredo, pesto, smoky barbeque or olive oil. Then they get into toppings. He said popular demand will govern the expansion of what people want on their pizza.

Before Grimes came up with the cheese mix for the pizzas, he said he conducted focus groups to refine the decision. Sauced Pizza uses a five-cheese mix of Romano, Parmesan, Asiago, Mozzarella and Provolone. He said it is a blend of aged and fresh.

For employees of Sauced Pizza, Grimes said he offers another opportunity. Once a person becomes a general manager, Grimes puts $6,250 a year away for them for four years. That will be the money the person needs to buy a franchise.

“They get the chance to become the CEO of their own business,” said Grimes. “They will be the one to connect with the community. We’re small now but in a few years they will be rewarded.” 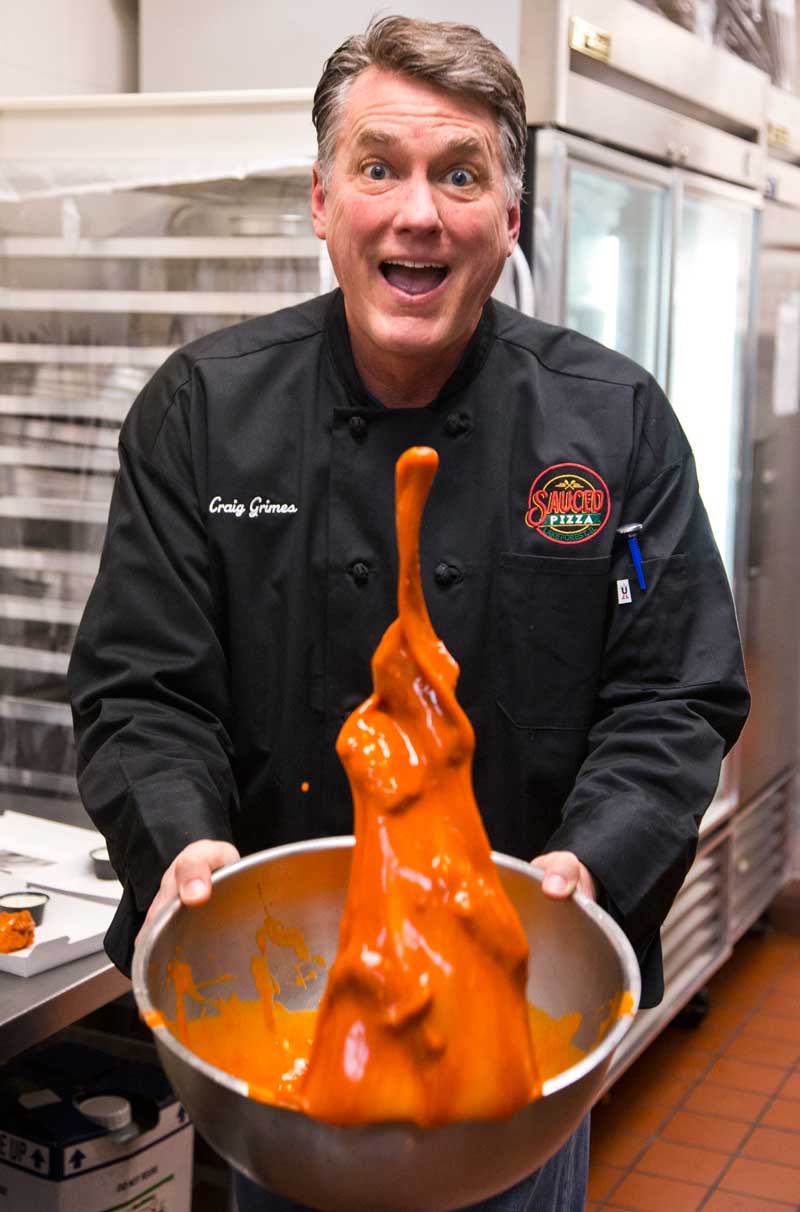 Owner Craig Grimes gets some wings ready at Sauced at in Lake Forest. PHOTOGRAPHY BY JOEL LERNER/JWC MEDIA 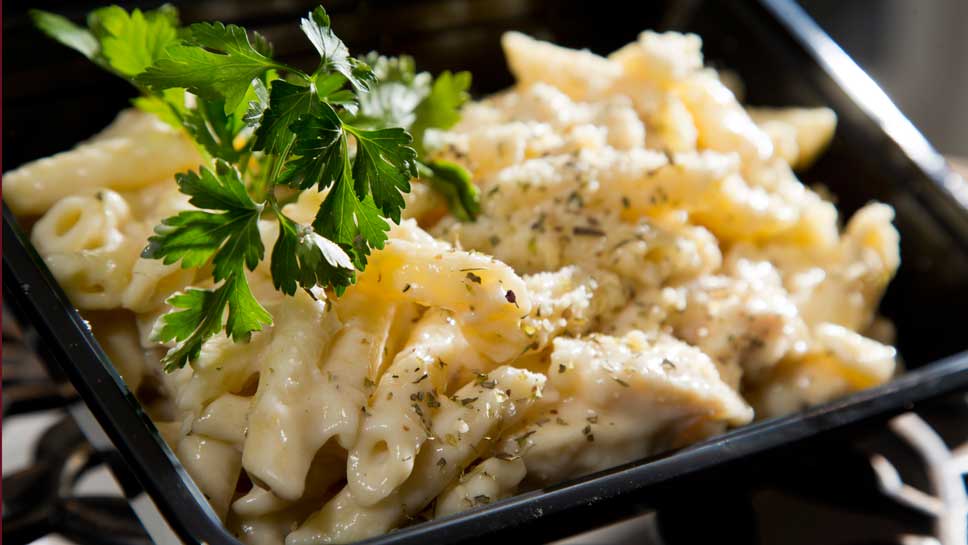 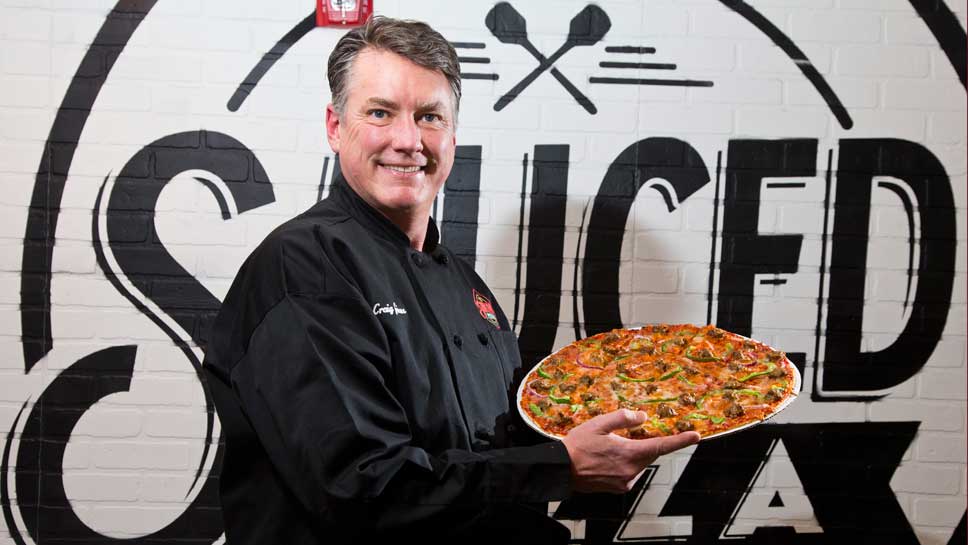 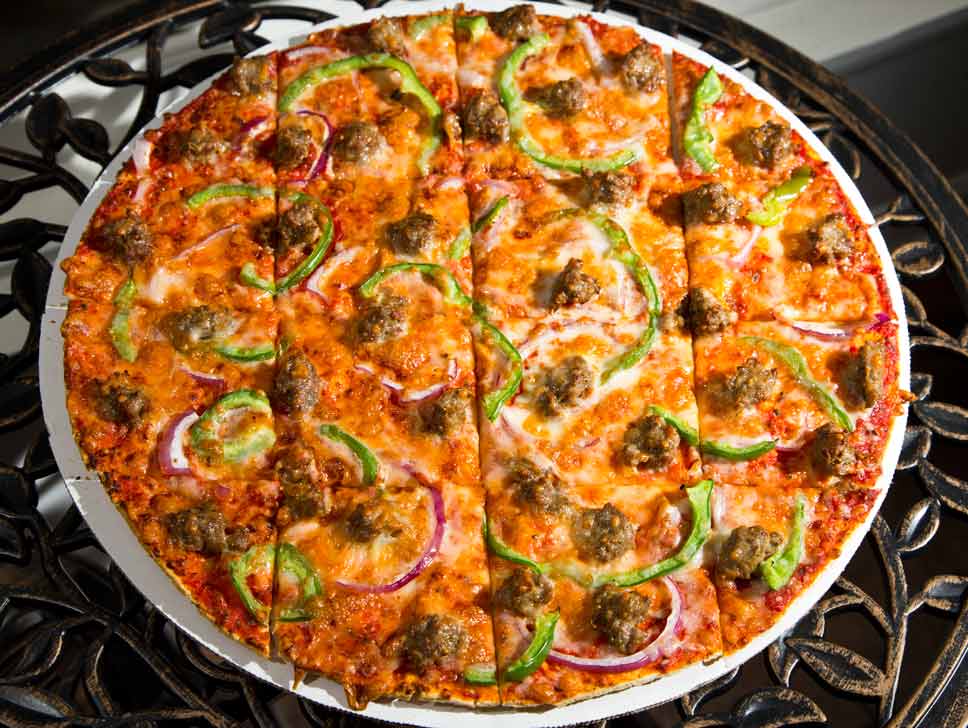 Sausage pizza with Provel cheese, which is a combination of cheddar, swiss and provolone.