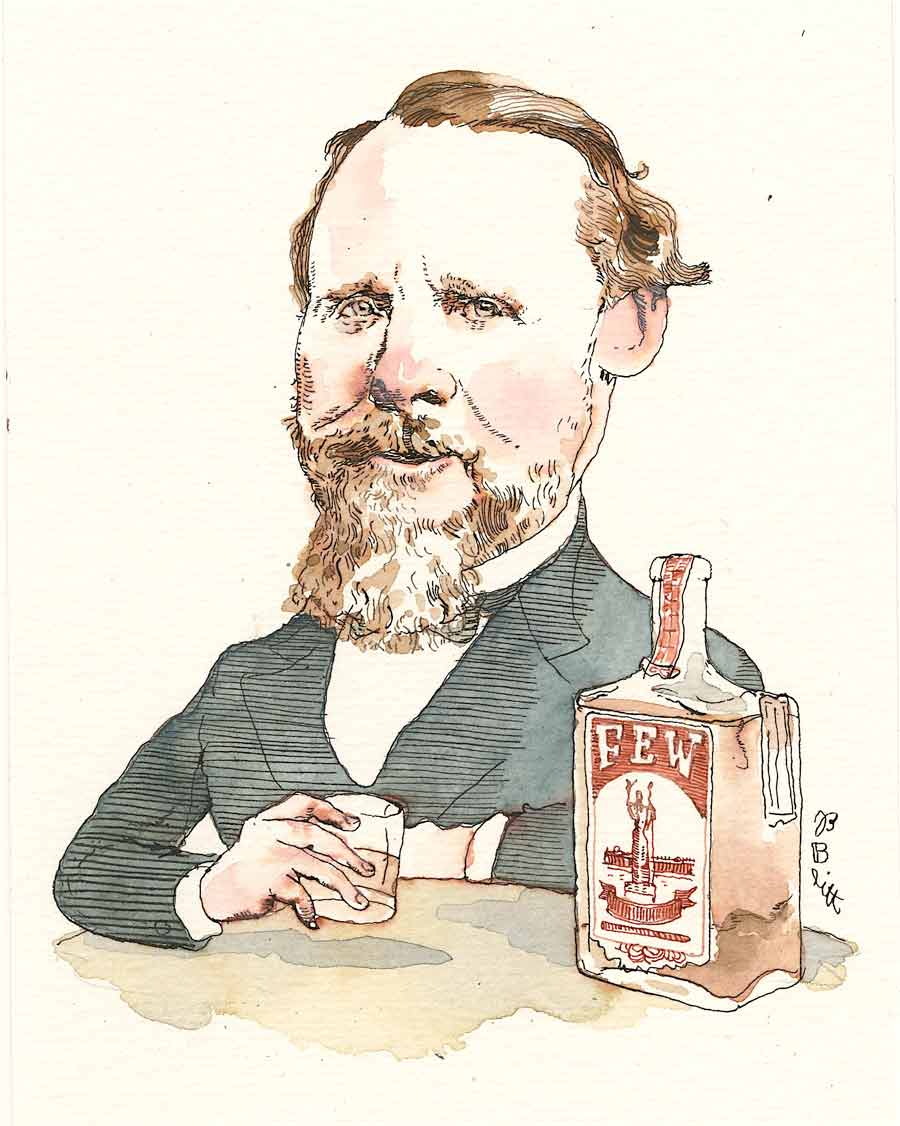 The namesake of Evanston and one of the founders of North Western University in 1851 — before it became known as Northwestern University — died at the age of 83 in 1897. But his spirit has returned to these parts in 2017, and it’s full of opinions and poised to share them with the readers of Evanston Magazine, a JWC Media sister publication of The North Shore Weekend.

How robust is Evans’ spirit?

It’s visible to anybody who has a tie to Evanston.

The 2nd Governor of the Territory of Colorado (from 1862-1865) and friend of Abraham Lincoln agrees to dine with me at The Lucky Platter Restaurant for breakfast, but only after we kick things off with a visit to FEW Spirits, located one-tenth of a mile from the restaurant in Evanston, or … John Evans’ town.

“I’m curious, because this area was a dry community in the 1800s,” says Evans, who, along with other Methodist movers and shakers, founded what would become a Big Ten Conference university along the North Shore.

We’re standing just outside the entrance of FEW Spirits, described on its website as “a distillery with an old-world, industrial-hip vibe, offering tours and a tasting room.”

Passersby stare at Evans’ thick, lengthy beard and Civil War-era togs. I fear a sneeze from Evans would free a trio of hidden birds from his facial hair.

We enter the five-year-old establishment, which I find out later was a Jaguar repair shop in the 1960s. We sit on steel bar stools in the tasting room, as a friendly distiller greets us and encourages us to order a flight of gins and whiskeys for $5.

I take a “fin” out of my wallet and show it to Evans, also the founder of the Illinois Republican Party.
His eyes widen, after noticing an image of Lincoln — his old friend and the 16th President of the United States — on the currency. I take a coin out of my right pants pocket and flip it three feet into the air.

I hope it lands heads, not tails.

Evans views the design of the coin, specifically the depiction of the man gracing the cent.

The distiller pours a little Wheat Whiskey in a glass and a little Barrel Gin in another glass. Evans downs the former, while I take a cautious sip of the gin. The distiller asks us to react.

Before I can voice my thought, Evans eyes another gin bottle and points to it. He wants to taste FEW Spirits’ Breakfast Gin.

“Good choice,” the distiller says. “It’s got some Earl Grey tea in it, with juniper and citrus.

“Lemony, isn’t it?” the distiller asks.

Evans nods at the distiller and stands up, my cue to leave a tip of bills featuring the face of George Washington.

Evans — also a physician, a railroad promoter and founder of hospitals, including Lakeside Hospital in Chicago (later named Mercy Hospital) — is hungry.

As we head for the door to begin our walk to The Lucky Platter, my gruff but intriguing companion from the past notices items for sale on a shelf in the cozy tasting room. He can’t take his eyes off a whiskey bottle, cut in half and positioned horizontally. It’s actually a cigar ashtray.

I read his facial expression: Maybe some other day.

On our way to the restaurant, Evans strides purposely past more staring folks along a Chicago Avenue sidewalk. I try to keep up with the native of Waynesville, Ohio, and Cincinnati College graduate (Class of 1838), but the only way to do so is by jogging.

The host at The Lucky Platter welcomes Evans and his gasping breakfast mate and asks, “Table or booth, gentlemen?”

Evans scans the menu and shakes his head. Never before had he seen so many choices and so many foreign entrees. But he likes the description of one and orders a Classic Benedict: poached eggs, with honey-baked ham and hollandaise and served on toasted cornbread.

As we wait for our food, Evans looks at the other patrons. I look down at my notepad and begin to doodle. He clears his thought.

“What are you doing?” he asks.

Evans sounds exactly like what one of my high school teachers sounded like when I wasn’t paying attention in geometry class.

A softer side of John Evans emerges as he thinks out loud about the topics he’ll address in the pages of Evanston Magazine.

“The construction boom going around here … quite stunning,” he says. “I have always marveled at the beauty of Lake Michigan, and I am looking forward to traversing the paths along the shore and making observations. I understand there has been considerable talk lately about local preservation issues. Look for me to weigh in on those.

“And is it true about the men’s basketball team at Northwestern?” he adds. “I learned from reading on the inner net — or is it the intra net? — that the Wildcats own a 16-4 record. Grand. That is absolutely grand.”

The debut of “Being John Evans” will run in the February/March issue of Evanston Magazine.