LAKE FOREST — A master plan for up to 30 high-end condominiums near downtown Lake Forest received an initial approval with construction set to start on the first phase by the end of January.

The Lake Forest City Council unanimously approved plans to replace existing office buildings with condos on the east side of McKinley Road across from the train station as one of two new housing developments in town January 17 at City Hall. 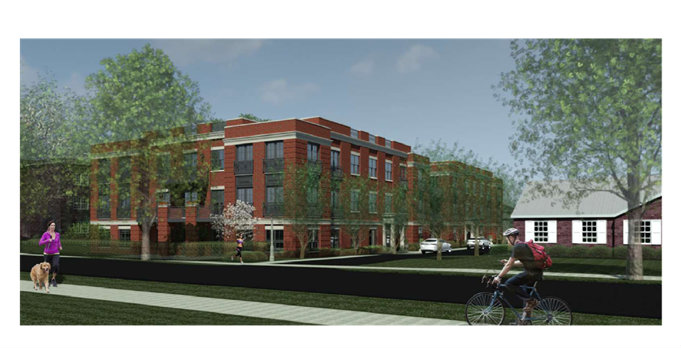 The first building of the McKinley Road project will feature 13 condominiums. Image courtesy of City of Lake Forest.

Developers Todd Altounian and Peter Witmer said in a DailyNorthShore.com interview after the council meeting construction will start on the first 13-unit building by the end of the month with a scheduled completion date of May 2018.

“These will be the equivalent of east Lake Forest single-family homes in quality,” said Witmer. “We’re developing our pricing. We’re getting ready to go to market with it.”

The first building received final approval while the remaining structures and the housing on Westminster must undergo final approval by the city, according to Altounian and Witmer.

Altounian and Witmer said the first building will have one-, two- and three-bedroom units ranging in size between 800 and 4,000 square feet. They said the next two buildings will be between six to eight units. They will determine the size and mix as the initial structure goes up. The cost will range from $400 to $600 per square foot. All buildings will have underground parking.

The properties included in the development currently have three office buildings at 711, 721 and 725 McKinley Road and the former home of the Lake Forest-Lake Bluff Historical Society at 361 East Westminster Road, according to Catherine Czerniak, the city’s director of community development.

Czerniak said in a presentation at the meeting that part of the overall plan includes a land swap with the city. The developers will trade some of the land at the south end of their property to provide more parking at the Lake Forest Library in exchange for the southern portion of the Westminster tract.

“We want to transition all commercial to the west side of the tracks,” said Czerniak. “We estimate more than 100 housing units have been lost. We used to have apartments on the second floors. Now they are offices.”

“This is the closest to a transit-based project as we’re going to get,” said Schoenheider. “It’s adjacent to downtown and so close to mass transportation.”

The other project the council unanimously gave a go ahead to on first reading is a nine-home development at 770 Westleigh Road between Stable Lane and Wallace Road.

Jim Purinton, the head of development for Deerfield-based developer Janko Group, said the homes will have first-floor master bedrooms geared to buyers transitioning to smaller quarters, with a 17-acre community backyard.

Described as a planned preservation development by Czerniak, the 22-acre tract is owned by Lake Forest Open Lands. She said Janko Group will buy the front five acres for the nine homes while Open Lands retains the rest as a preserve.

“These will be smaller lots in a unique setting,” said Czerniak. “The developer will only own the developed (five-acre) portion. The (remaining 17 acres) will not be subject to future development.”

Purinton said the homes will range from 2,700 to 3,500 square feet in size. The initial first reading approval gives the company the opportunity to develop its final plans. He said pricing is still under consideration.

“These are for people downsizing because they don’t need an acre and a half lot and an 8,000 square-foot home anymore,” said Purinton. “They get 17 acres of trains and we help preserve wetlands.”