Those are the words organizers of a marketing campaign to promote Lake Forest to potential residents, both residential and commercial, want to permeate with lifelong residents, newcomers and everyone in between, according to Alderman Prue Beidler, who chairs the effort.

Beidler and her team told a gathering of more than 45 people the basis of the campaign at a public meeting January 10 at a Lake Forest office building. 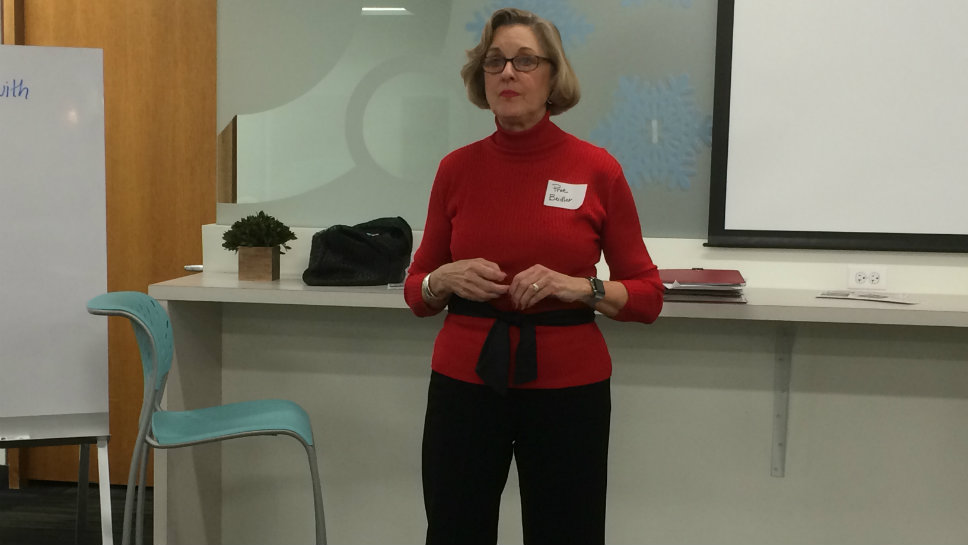 Marketing campaign committee chair Prue Beidler listens to a comment from the audience.

“We want people to consider Lake Forest as a place to relocate. We have a great story to tell and we’re going to do it. If people live here they’ll eat here and shop here,” said Beidler of the message crafted for people the city wants to attract. “You are the messengers,” she added speaking to the residents in the room.

“Welcome home” is the concept the campaign wants to communicate to people who are looking for a new home for themselves, their family or their business, according to Phil Gayter. Gayter is a marketing professional and the creative director at Brandstorm, a firm the city has hired to assist with the campaign.

Gayter said the idea of the campaign is to give people a sense of returning to a special place, whether it is a first time homebuyer or a person stepping off the train after a day of work in downtown Chicago. He said the beauty of the concept of “welcome home” is people can give it their own meaning.

“It allows the viewer to have their own interpretation,” Gayter said during his presentation. “It (the campaign) speaks to me. I’m going to take another look.”

Reaching Millennials Is a Goal

The idea for the campaign began when Mayor Donald Schoenheider and City Manager Robert Kiely Jr. met with members of the real estate community last spring, according to Beidler. She said there was concern about the lack of movement of homes for sale.

“We want to reach people in all demographics,” said Beidler. “Walkability is important to retirees but we will be targeting millennials, specifically millennials. We want to speak to what is driving them.”

Some people in the room like Kendall Severson and Caitlin Saville Collins have already hearkened to the message. The two women are Lake Forest natives and self described millennials who have returned to raise their families.

Severson, who said people in her millennial generation tend to range from early 20s to mid 30s, lived in New York City and Washington, D.C., before returning to Lake Forest with her family in November of 2015. She said her husband got the message too.

“My husband says this feels like home,” said Severson. “He says it’s not like the other places we’ve lived. “My daughter is 2½ and she’s the neighborhood kid. She can play in the street and she couldn’t do that where we lived before.”

Safety Is an Important Issue

The ability of Severson’s daughter to play in the street parrots one of the things Beidler said is important to millennials. She has her own personal pipeline.

“My son is a millennial,” said Beidler. “He said be sure you put safety at the top of your list. When people start to have kids, a nanny and the second kid we want them to think of Lake Forest.”

“It is expensive,” Collins said. “It is something we’re dealing with but it’s not easy for people in their 20s and 30s. A lot of the people we know who are newcomers are renting.”

People like Collins and Severson are the type of residents who Beidler hopes will be spokespersons for the city. Another group Gayter said the campaign wants to attract is those who take jobs in town. He said an effort should be made to get them to live here too.

“Employees will call it home too,” said Gayter. “When people come here to work for Abbvie and Abbott we want them to live here.”

Beidler said the first pieces from the three-year campaign will start to show up around town by June.

The current members of the committee joining Beidler are Deborah Fischer, a broker with Berkshire Hathaway HomeServices Koenig Rubloff and president of the Board of Directors of the Lake Forest-Lake Bluff Chamber of Commerce, Susan Banks, the city’s communications manager and Susan Kelsey, the city’s economic development officer. 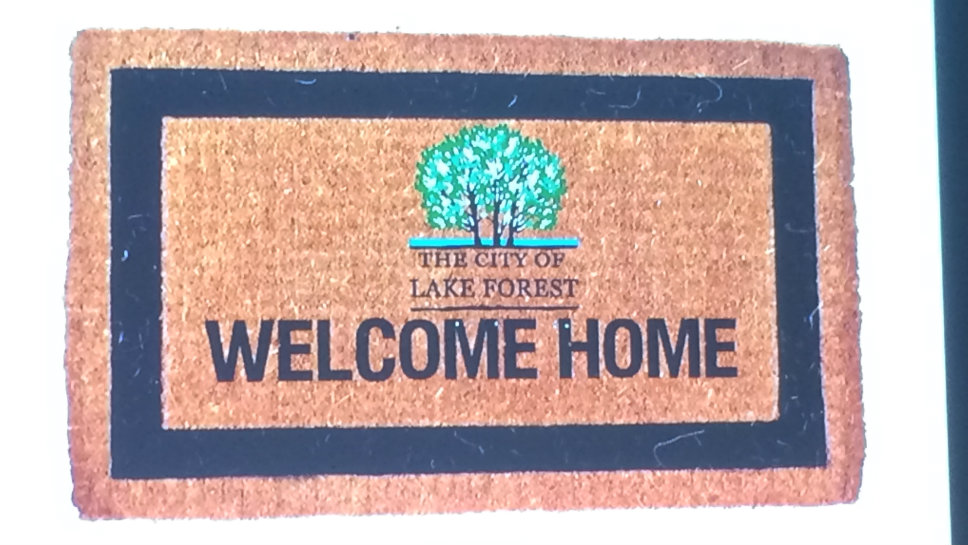 One thing which could be seen around town as a result of the marketing campaign is a welcome mat like this. 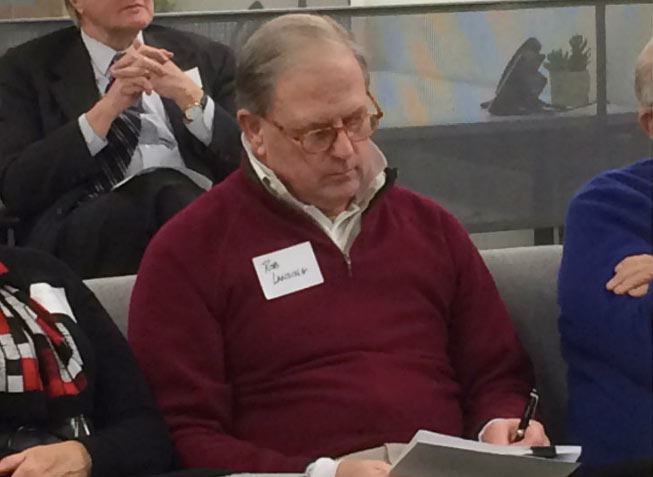 Rob Lansing, who is running unopposed for mayor of Lake Forest, takes notes at the meeting.