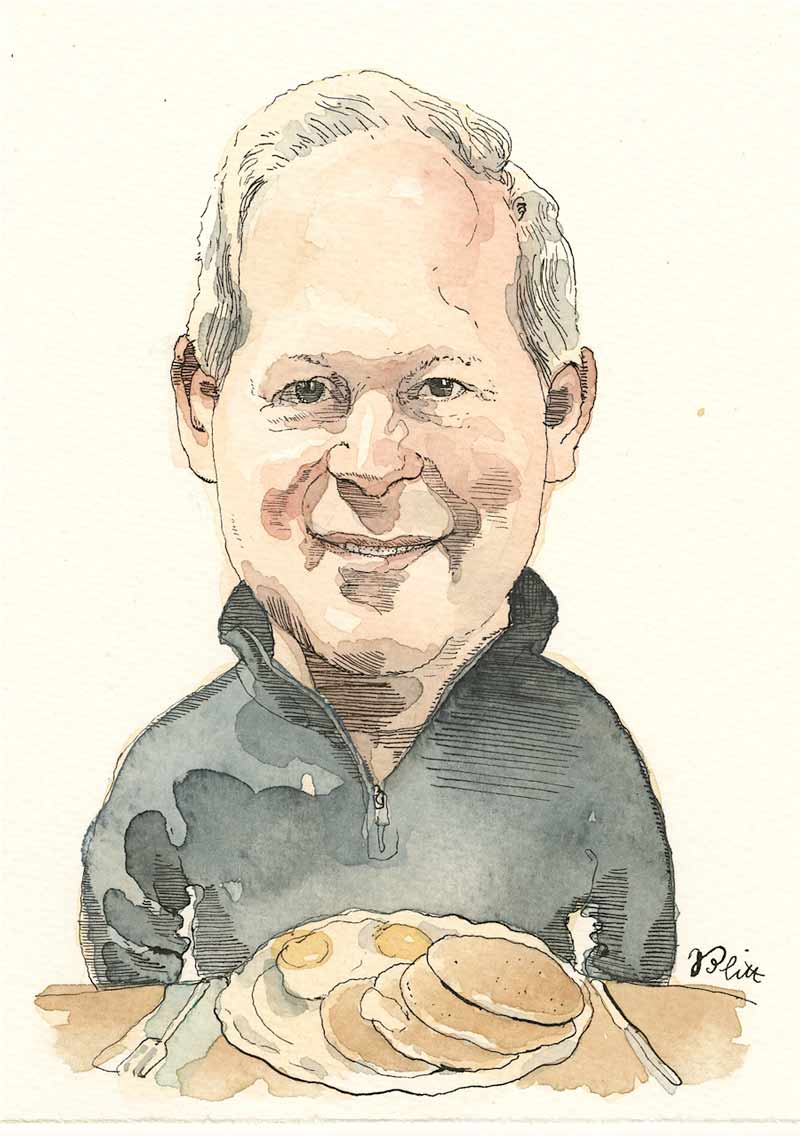 Yes, this feature is called Sunday Breakfast, but Sunday was Christmas so here we are on the Monday after and Monday is a more fitting day to have breakfast with Steven Dolins, 60, founder of The Sirens Records label, which is primarily dedicated to preserving Chicago blues piano masters. Monday has figured in many classic blues songs (“Stormy Monday,” anyone?), but on this day, the sky is cloudless, it’s, what, 50 degrees outside, and we’re at Walker Brothers in Highland Park. What’s there to be blue about?

That’s a misconception about the blues, anyway, Dolins reflects. Grim though a blues song’s subject may be, it is often a very joyful noise. “Especially in Chicago,” he says, “the blues started out as community music, such as for dancing at house rent parties. Of course, having to raise rent money might be considered depressing.”

This breakfast is bittersweet for Dolins, a Highland Park resident since 1992. He ate here frequently in the company of Charles Goering, better known as Barrelhouse Chuck, who passed away in December at the age of 58. Pianist Barrelhouse Chuck was a recent inductee into the Chicago Blues Hall of Fame. Last July, The Sirens released his latest CD, “Remembering the Masters.” He recorded four other albums with Dolins.

“I always order scrambled eggs,” Dolins recalled, “and he’d always say, ‘Scramble, but don’t gamble.’ He said that every time.”

Barrelhouse Chuck was the very model of the type of musician Dolins was committed to getting on record and later CD. He was someone who had been mentored by venerable Chicago blues legends such as Sunnyland Slim, Little Brother Montgomery and Erwin Helfer. “These pianists learned from each other and they passed on the (musical) traditions,” Dolins says. “It was important for Chuck and me to preserve these traditions as much as we could.”

How did Dolins get bitten by the blues bug? A Chicago native, he grew up in Skokie in a household where music was always playing. His three older brothers had thousands of albums. His brother Barry’s extensive record collection was heavy on blues. His oldest brother, Jerry, took him to blues concerts at the local VFW when he was 14.

(Barry would later become the deputy director of Chicago’s Department of Cultural Affairs and the head of the Chicago Blues Festival).

“Roll ‘Em Pete,” by boogie-woogie pianist Pete Johnson, was the first record that “got me going,” Dolins says. “I became really interested in piano because of that.” Another influential figure on Dolins was Johnny Young, a blues mandolin player and pioneering electric blues artist. He played a song with which Dolins was familiar from one of his brother’s Paul Butterfield Blues Band albums, “Walkin’ by Myself.” That song was written by Jimmy Rogers, Muddy Waters’ guitarist and later a solo artist who Dolins also came to admire.

Dolins began to engage blues artists when he went to see them perform live. “They were so accessible,” he recalls fondly. “You could go right up and talk to them.”

Another Chicago icon who looms large in Dolins’ story is boogie pianist Erwin Helfer. “I heard him perform at the University of Chicago Folk Festival in 1971 and called him the next day to take lessons,” Dolins says. “I had to convince a high school friend of mine to take piano lessons, too, because he had a car and I couldn’t drive at that time.”

Dolins took lessons from Helfer for two years. When it came time to go to college, he chose Tulane, which was where his mentor had studied. “And there are very good piano players living in New Orleans,” Dolins adds with understatement.

He was not a music major, however. He studied physics and political science. But preserving Chicago’s blues heritage was his passion and while a freshman, he put out two LPs “just to learn about the music business.” One was a re-release of an album Hefler recorded in the 1950s, “Primitive Piano.” The other was “Heavy Timbre” featuring Sunnyland Slim, Jimmy Walker and Helfer.

This was the beginning of The Sirens. Remember the friend who drove Dolins to piano lessons? He became an investor in the fledgling label, along with Dolins’ brother, Barry. “We were the original blues brothers,” Dolins jokes.

Out of college, Dolins put The Sirens on hold. He earned a Masters and later a Ph.D. in computer science. He worked in data analytics for A.C. Nielsen.

In 2000, Dolins took up piano lessons again under Helfer, who recommended he study further under another teacher, and that is how he met Barrelhouse Chuck. But instead of giving him piano lessons, he encouraged Dolins to restart The Sirens and carry on promoting and preserving the Chicago blues piano tradition. The first recording in The Sirens reboot was Helfer’s “I’m Not Hungry, but I Like to Eat-BLUES!”

Sixteen years later, Dolins is chair of the computer science department at Bradley University, but The Sirens live on as a passion project. “It’s pretty tough to make a living with an independent music label, especially the way digital has changed the business of music,” Dolins states. He is branching out to record gospel pianists, another Chicago musical tradition that is “very blues based and still vibrant,” he notes. In 2016, he released “Lift Me Up: Chicago Gospel Keyboard Masters” featuring Richard Gibbs, Elsa Harris, Bryant Jones and others.

He also teaches about the history of the blues as part of Bradley University’s continuing education program.

Which is not the same as the way he learned about the music. His mother used to drive him to the Chicago’s legendary Jazz Record Mart to explore. He worked there in 1975 to learn about the business.

With the elderly musicians passing on, he laments that a new generation of nascent blues fans cannot meet these legends first-hand as he did. “It’s pretty sad,” he says. (Always the blues with this guy).

As to musical legacies, the conversation returns to Barrelhouse Chuck, who left behind “a museum-quality” collection of records, keyboards, furniture and clothing. “What will happen to it?” Dolins ponders. “That’s a good question. It would be nice if that collection could be preserved and not broken up.”

Dolins finds another way to honor his friend’s memory. When the waitress comes by to take his order, he replies, “Scrambled eggs; scramble, but don’t gamble.”

For more information about The Sirens catalog, visit www.thesirensrecords.com