HIGHLAND PARK – Though retired Highland Park teacher Cheryl Levi has passed the baton to Deerfield teacher Terry Grossberg, both share the same goal of helping others at the 8th Annual MLK Day of Service on January 16 at the Recreation Center of Highland Park from 10 a.m to 2 p.m.

“This was her baby and though she had other people helping her, this was a Cheryl Levi production and she did such an unbelievable job,” said Grossberg. “I’ve had plenty of help, but it’s my job to oversee it all.”

Grossberg said he founded a group called HP Forward that “promotes kindness in our community through volunteerism and we try to do initiatives in town to bring our neighbors close together.” HP Forward had a table at MLK Day of Service where kids made banks out of pie tins called Pockets For Change to bring home, and collect money that would be donated at the end of the year to their favorite charities.

After participating in MLK Day of Service for a few years he got to know Levi. “Cheryl was also my daughter’s social studies teacher at Elm Place Middle School,” he said. Last year she asked Grossberg if he would take over the event, so he agreed and became a member of the Human Relations Commission with Levi. “Now we work more as a team,” he added.

Grossberg said he is also grateful to other team members: Ellen Gussin is in charge of food, Laura Frey is doing promotions, Marietta Stevens is in charge of volunteers, Larry Sassarossi is doing the fundraising, and Cheryl is “filling in all of the gaps. Janet Bernstein and Debbie Pierce from Park District of Highland Park have been a tremendous help, as well as people from City Hall.”

“Currently, we have between 25 and 30 projects scheduled for this year which is similar to last year and nine D-112 schools will be participating,” said Grossberg.

Grossberg said during this “transition year’ the team wanted to ensure that they had “good speakers that convey Martin Luther King Jr’s legacy of service and Lynn Epps from the Rec Center will recite excerpts from MLK’s speech.” Mayor Nancy Rotering and Park District Board President Scott Meyers will speak at the event as well.

Grossberg recently announced his candidacy for the Park District Board. “If you’ve ever checked out HP Forward you’d see that I take a lot of pictures of nature, the lake and parks and I’ve always had a real passion for that,” he said. “I’ve served on the baseball committee for the Park District and want to preserve our lakefront. I also want to enhance and maintain our great facilities such as our Rec Center, Centennial Ice Arena and Hidden Creek Aquapark. I’m very qualified and very active and I’d like to give back to my community.”

Grossberg said he’s taught band at Caruso Middle School in Deerfield for about 15 out of his 31 years of teaching. His two children attended school in Highland Park. He’s been married to his wife Marla for 25 years and they just received word that she’s a “survivor.”

This explains why Grossberg is determined to promote good health at MLK Day of Service.  “We might get more health related projects next year like blood pressure checks and even a blood drive at some point,” he said. “Going forward I’d like to have MLK Day expand to surrounding towns like Deerfield and Lake Forest, and to bring in more hands-on health workers here to spotlight kids and seniors to make sure we have a healthy population as well as a service oriented one.”

Grossberg is looking forward to January 16: “The spirit and energy of having more than 1,400 people come through the doors the last few years is so exciting,” he said. “People just dive right into the projects and seeing the smiles on the faces of the kids for the projects they bring home or the letters they write to the troops is so rewarding. When we cap it off with The Jessie White Tumblers, it’s just a great ending to a great day.” 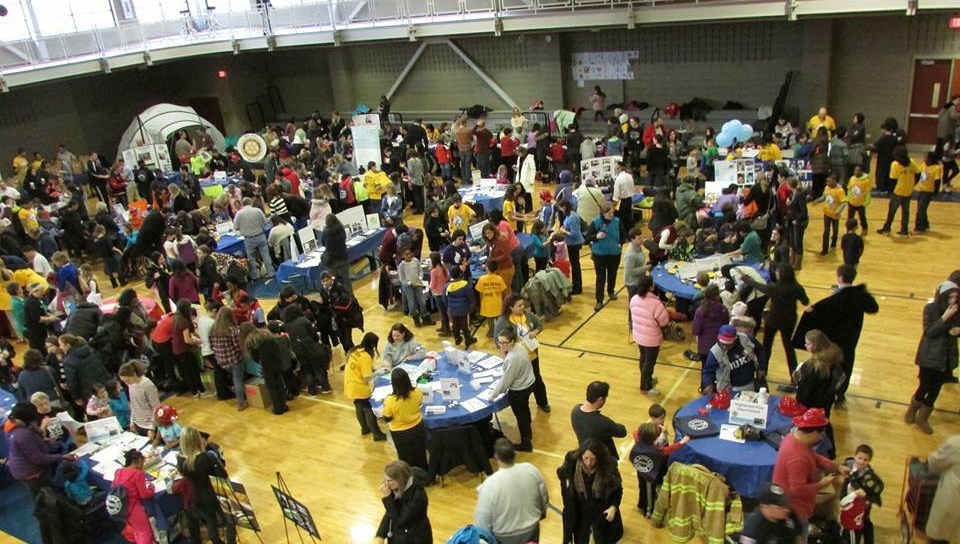 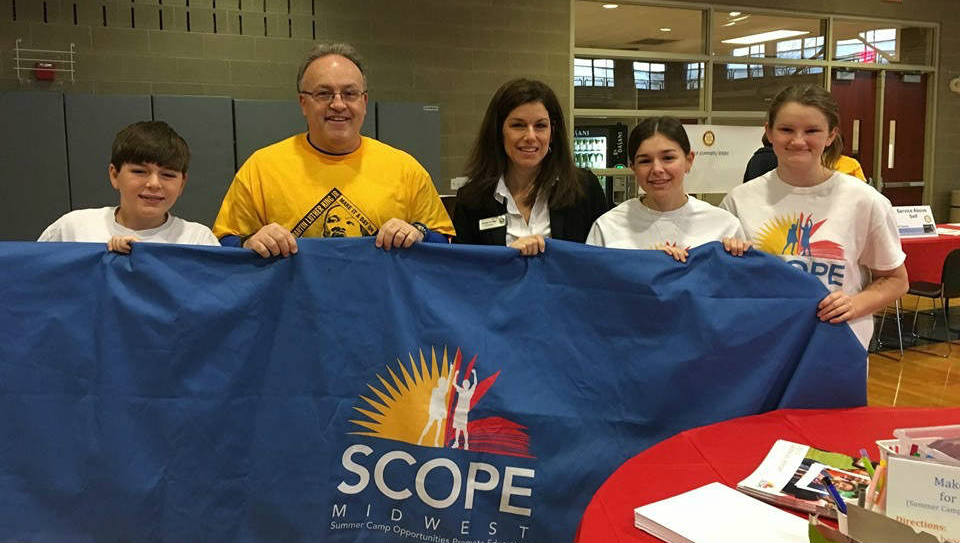 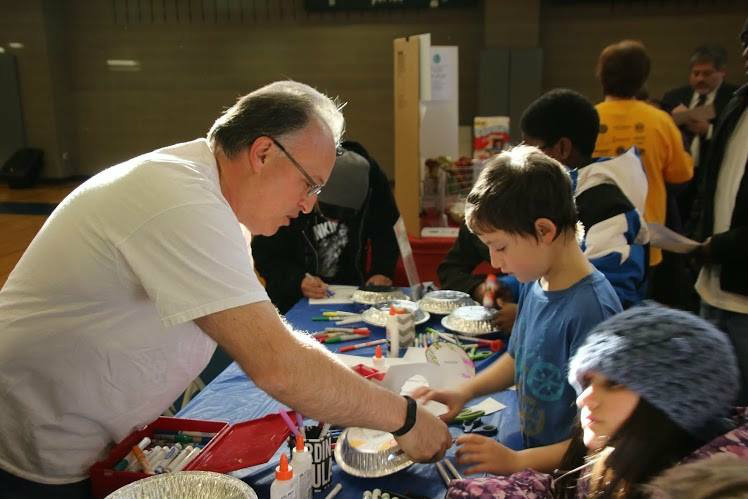 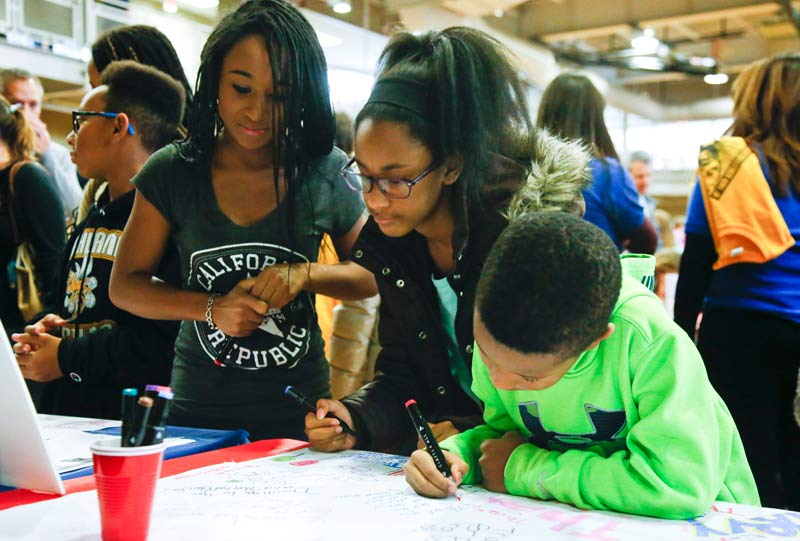 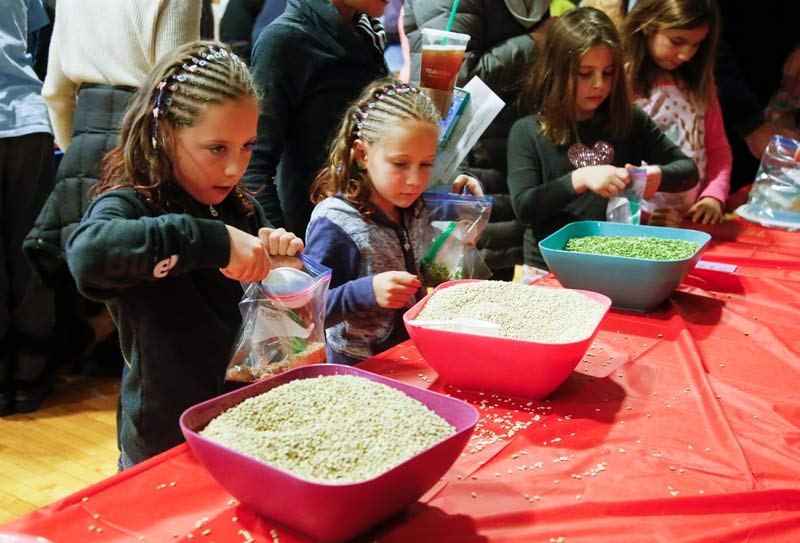 And another photo by Joel Lerner