WINNETKA – Winnetka’s Village Council kicked off the approval process for One Winnetka with a nod to preliminary approve the project that has been under consideration for nearly two years, after the project ordinance and development agreement were introduced at a meeting on January 3.

Village trustees expressed satisfaction with a process they view as protecting the village, neighboring 711 Oak Street residents and the Hadley Institute, while pushing forward with a controversial project that aims to improve the village’s business districts.

Village trustee Andrew Cripe noted that Stonestreet Partners LLC has been very cooperative throughout the process. “I think every issue that was raised in our previous deliberations were in the documents and addressed,” Trustee Chris Rintz said, agreeing with Cripe’s sentiments.

Trustee Kristin Ziv continued to throw her support behind a development she views as positive. “I am on the record arguing that this project is good for our village. I am happy the ordinance is moving ahead,” she said. 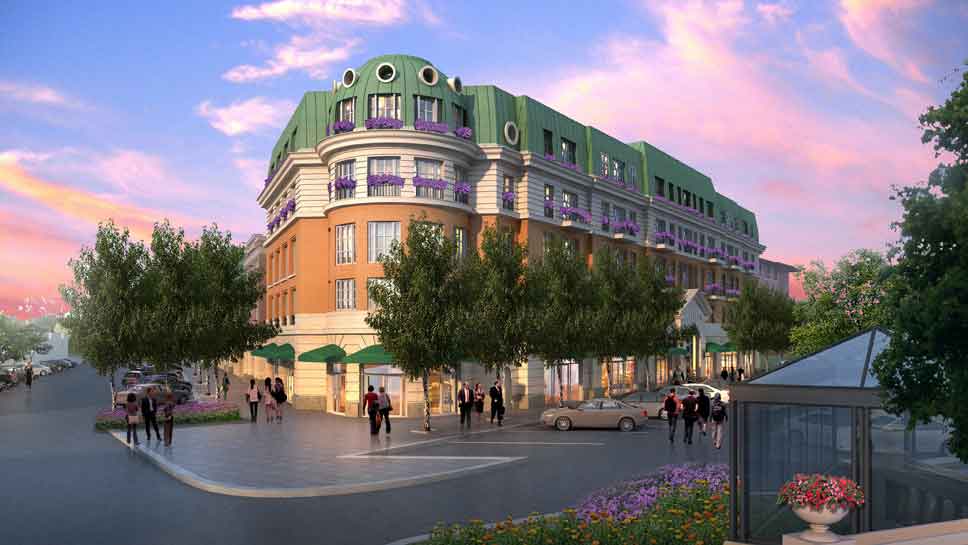 One Winnetka August 2016: view from Little Ricky’s across the street.

The trustees’ decision will become official on January 17, when they are scheduled to vote on adoption of the ordinance and development agreement. If adopted, Stonestreet will have 180 days to submit a full set of engineering plans for final approval. Each of the recommending bodies — the Plan Commission, Zoning Board of Appeals and Design Review Board — will review the final plans before it returns to the village council for final approval.

Michael D’Onofrio, the village’s community development director, told the council that only one modification has been made to the project since the September 20 presentation by Stonestreet, when the village approved going forward with the project. The proposal now includes a range of 55 to 62 units, instead of the 61 units originally proposed. The height, size and footprint of the project will remain the same, however.

Situated on a 1.38 acre site, the project will include three buildings comprised of condominiums, rental units and townhouses, as well as nearly 34,000 square feet of retail space. The center building facing Elm Street will be the smallest — standing 4 stories high — while the east and west buildings will each stand at 5 stories high. The project will also include three parking structures. The village lot next to Hadley Institute will include 114 spaces, a parking lot beneath the buildings will serve residents with 106 spaces, and a west below-ground parking lot will have 56 commuter parking spaces.

Trustee Penny Lanphier peppered D’Onofrio and Peter Friedman, Winnetka’s village attorney, with questions about the process to ensure that residents understood how the project will move forward. “I think it is important that we are really clear now that there is really nothing else at this point to discuss,” she said.

And while Stonestreet is permitted to make changes to the proposal, it would do so at its own risk. “If changes were made then that gives the lower bodies and the village council more discretion to say yes or no. If what is being proposed for final plan is substantially the same as what is approved on preliminary, then the village’s discretion to deny that is extremely limited,” Friedman explained.

The documents contain a timeline that should push the project along, such as a clause that requires the project to be substantially completely within 24 months of when the permits are issued. “That timeline was set to have a definitive outside timeline,” Friedman explained. The village will receive about $375,000 in permit fees, in addition to electric and fire alarm fees.

Specific protections for neighbors, such as measures to alert pedestrians of cars entering and exiting the parking lot adjacent to Hadley Institute, are also included. Likewise, Stonestreet is required to hold monthly meetings with Hadley Institute representatives and residents of 711 Oak Street in the first twelve months. Stonestreet will pay $30,000 for the village to retain a compliance officer to be onsite monitoring the development to insure compliance with village code.

Freidman explained that the documents also include measures to protect the village from liability and financial risk, such as a performance security of 125% of the cost of performance which will then transfer to a guarantee security of 15% for two years, when the construction is nearly complete. Stonestreet will also be required to prove it has the financing secured prior to any building permits being issued, as well as a third party guarantee, guaranteeing the completion and satisfaction of the development agreement.

Overall the trustees expressed their pleasure with the documents as drafted. “Based upon Peter’s excellent memorandum it appears that the contract certainly protects the integrity and the quiet enjoyment and the safety of the people affiliated with the Hadley School and those living in 711 Oak and those were my chief concerns back in September,” Trustee Bill Krucks said.

To view the ordinance and development agreement go to www.villageofwinnetka.org.