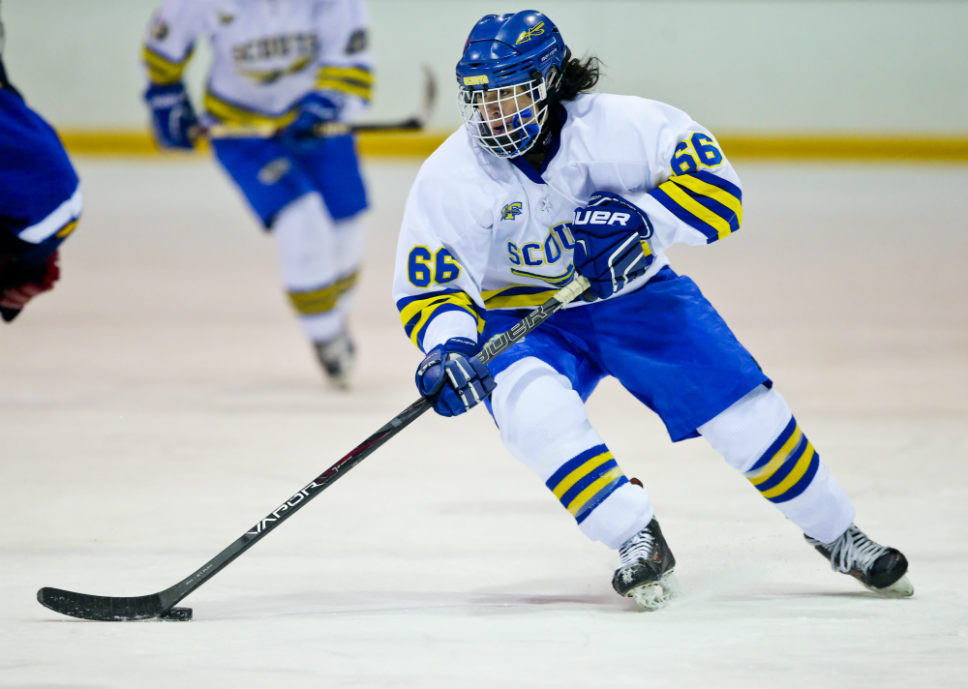 Kyra Mangasarian of the Scouts leads a rush during recent 6-0 win over Warren. Besides starring on defense, the senior co-captain leads the team in assists. PHOTOGRAPHY BY JOEL LERNER

Scouts defenseman Kyra Mangasarian went down hard on the ice and stayed there two seasons ago in a hockey game. Her coach, Liz Zorn, left the team’s bench swiftly, worried her standout from Lake Forest High School had suffered a serious head injury.It was Mangasarian’s shoulder.

Some two years later, this past October, another Mangasarian needed medical attention after a Scouts game. It was Cheryl Mangasarian, Kyra’s mom, the team manager and an avid photographer. The cancer survivor — when her daughter was an infant — had suffered a brain aneurysm.

“That was scary,” says Kyra, now a senior and a co-captain. “She’s OK now, thankfully. She’ll be back to work soon. I’d always wanted to be a doctor, after wanting to be a veterinarian when I was little, but when my mom had the brain aneurysm, that confirmed my career goal for me.

“I want to be a neurosurgeon.”

The former Californian (pre-kindergarten years) and Highland Park resident has applied for admission to five of the eight Ivy League schools, plus USC, UCLA and the University of Michigan. Hockey continues to be a significant part of Mangasarian’s life as a teenager, but it’s nowhere near priority No. 1: academics. Grades before blades. Books before pucks.

“She’ll be a good doctor, absolutely,” says the Scouts’ other co-captain, Olivia Remissong. “Kyra is empathetic, hard-working, smart. She’s down-to-earth and personable, positive and encouraging. She balances discipline with having fun in hockey, which is important as a captain.

Mangasarian is a playmaker more than she is a scorer, and that entertaining quality was on display in the Scouts’ 6-0 defeat of visiting Warren at Lake Forest College’s rink on Dec. 15. She distributed three assists on a night in which leading scorer and freshman Kennedy Stein (15 goals, through Dec. 15) was slightly overshadowed by senior forward Katie Wynn. Wynn, a Stevenson High School student, recorded a hat trick while Stein found the net twice. (LFHS junior Tori Soukup scored the other goal).

Mangasarian was a blur each time she took the ice, flying from end to end and pivoting effortlessly while creating scoring chances for her teammates. Her assist total (seven) through Dec. 15 ranked first among Scouts. She was second to Stein (19) in points (nine) for a surging 4-5-2 team, which got off to a 1-4 start this winter.

“She plays well all over,” Zorn says of her fourth-year varsity Scout. “I love that Kyra is as versatile as she is, how shifty and fast she is. I love her on offense, on defense, on the power play, on the penalty kill. Kyra shows up to play.”

Mangasarian, a figure skater when she was seven years old, played serious youth hockey before entering LFHS as a freshman in 2013. Coaches gladly welcomed her as a member of a Falcons house hockey team for boys. She then played for a Falcons girls travel team, and in her first year as a reserve player on a U-14 Chicago Young Americans AAA team, became a national champion in San Jose, California.

She made Team Illinois’ U-16 team and later skated for the Chicago Mission, another AAA team, in 2015-16. Hockey was a major part of her identity for years. Who doesn’t dream of putting on a USA jersey for an international contest when the young player has an abundance of talent? Mangasarian was on track to reach a high level and then maybe a higher one. College hockey? Realistic.

But at some point along the icy path she started to shift her focus to what she wanted her life to be like as a 30-year-old and beyond. She could see herself wielding a scalpel when it mattered most, not a hockey stick.

Mangasarian is sitting in the warm lobby area of the LFC Ice Arena, about 15 minutes after a Scouts victory. Her father, Jeff, is walking around nearby, patiently waiting as Kyra answers questions about her past, present and future. Jeff was a center in basketball at a high school in Madison, Wisconsin. Sporting an easy smile and projecting a gentle confidence, the daughter discusses all that is good about her mother, a former ballet dancer and a University of San Francisco graduate.

“She’s bubbly and efficient, with high standards,” Kyra says of the native of the Philippines. “A lot of her relatives chose to become doctors. My mom expects the best from people. And she’s cultured; she’s traveled to many countries. She knows a lot.

Now that she is in the “third period” of her competitive hockey career, Kyra Mangasarian plans to cherish every minute of every game in 2017. There’s nothing new about that. Her healthy attitude on the ice today — all-out, enthusiastic and positive — is the attitude she brought to the ice in her days as a Falcon.

“I remember a night in her freshman year,” Zorn says, “when she practiced with her AAA team in Lincolnwood and then traveled here [to LFC] to practice with her high school team. Kyra got out of a car, with her gear still on, and she walked across the parking lot with her skate guards on. She was ready to go for another practice. I remember thinking, ‘This kid is for real.’

“Kyra,” the coach adds, “has the right intensity to be a doctor, the right drive. She works really hard, and she’s brilliant.”

Notable: Scouts senior goaltender Corynn Salazar, a Stevenson HS student, stopped 10 shots in the 6-0 defeat of visiting Warren on Dec. 15, upping her record to 2-1-2. The club’s other goalie, Libertyville High School sophomore Amanda Peter had a 2-4 mark through mid-December. … The Scouts next play on Jan. 8, against host Maine in Niles.