LAKE FOREST/LAKE BLUFF — When the national discussion of the recent presidential election turned more and more negative, Laurie Giesen of Lake Forest decided to use the creativity of children to change the tone.

Giesen found eight youngsters of varying ages throughout the Chicago area to draw or paint pictures depicting a trait of greatness and added five of her own photographs, creating an art exhibit to communicate the message. She named the exhibit Universal Greatness.

The logo for Universal Greatness was designed by Josie Balmelli of Lake Forest. Photo courtesy of Laurie Giesen.

After a nearly two-month run at the Chinatown branch of the Chicago Public Library, she is bringing it home to the North Shore.

The exhibit opens January 2 at the Lake Bluff Public Library, continuing through the end of the month. It shows how the area’s youth depict traits of greatness like trustworthiness, curiosity, loyalty, love, compassion, a concern for the environment and more.

“There is a lot of truth in what they write and draw,” said Giesen of the young artists. “This is a positive counterpoint to the negative election just passed for president and it’s quite beautiful. Their artwork illustrates each one’s idea of one trait that makes a great person.”

Guided to elementary and middle school students interested in an art project with a public service message, Giesen said she reached out. She talked to neighbors and people she knows through the First Presbyterian Church in Lake Forest where she attends.

Two of the participants, one a Syrian refugee from Chicago’s Rogers Park neighborhood and the other a Deer Path Middle School eighth grader, selected loyalty and used a dog to help make their point, according to Giesen.

Anas Subh is a fourth grader who immigrated to the United States from Syria with his family. Giesen said she met him through a friend at church. He drew a picture of a dog in front of a home protecting the home and its owner.

Josie Balmelli, a Deer Path eighth grade student, said she also equates dogs with the trait of greatness she selected for the project—loyalty.

“Ever since I was really little I felt loyalty was a strong quality,” said Balmelli. “I drew a dog because they are a passion of mine. We’ve owned dogs while I was growing up and they are so loyal.

Balmelli said her image of a dog is one standing in front of flags of many of the world’s nations with the word loyalty printed in “every language I could find.” She said there are more than 25.

Along with her artwork, Balmelli designed the exhibit’s logo, according to Giesen. The day the exhibit opened in Chicago, November 2, Balmelli had successful open heart surgery, according to Jessica Balmelli, Josie Balmelli’s mother.

“It was prophetic,” said Giesen. “She had open-heart surgery and she was opening her heart.”

Some of the people Giesen herself depicts as great are those most people come across in their daily lives like letter carriers and those who spend their days helping others around their homes. She snapped a picture of Lake Forest postal worker Mark Hume, who she said displayed generosity.

“I told him about a (different) public service art project,” said Giesen. “He took a $20 bill out of his wallet and said ‘will this help you.’”

Another picture Giesen took is of Coco Ulloa, who assisted a person who broke her arm in a fall. Ulloa saw the victim in need and felt a call to help, according to Giesen.

“She said, ‘I have my full time job and I offered my soul because I like helping people. Someone broke her arm and she wasn’t able to take care of herself—to cut food, go to the doctor or get dressed. I offered myself to make life easier. You have to have compassion for others. I believe it and I have it,’ ” Giesen said of Ulloa. 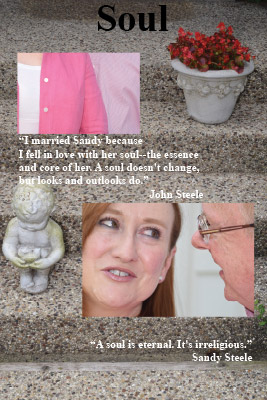