But Restaurant 210 & Live Music Lounge co-owner Steven Goldstein unveiled the evidence. Tucked away in a storage room near the stage are remnants from the original bowling lanes. “One of the original pin setters still comes in for a beer about once a week,” said Goldstein. “The bowling alley was first built in 1949 and it was called Mary Jane Lanes, after the builder’s daughter.” It’s also been called Minstrel’s Alley, and Highwood Lanes. In 2005, Goldstein took over the bowling alley at 210 Green Bay Road and renamed it The Alley.

Head chef and co-owner Jeff Tomchek explained how The Alley transformed into 210 Restaurant & Live Music Lounge. Tomchek said he’d been working at Green Acres Country Club for six years when he decided to open his own restaurant. He was looking for space and some mutual friends suggested that he contact Goldstein, who also works in commercial real estate. After several unsuccessful outings, Goldstein brought him to The Alley. 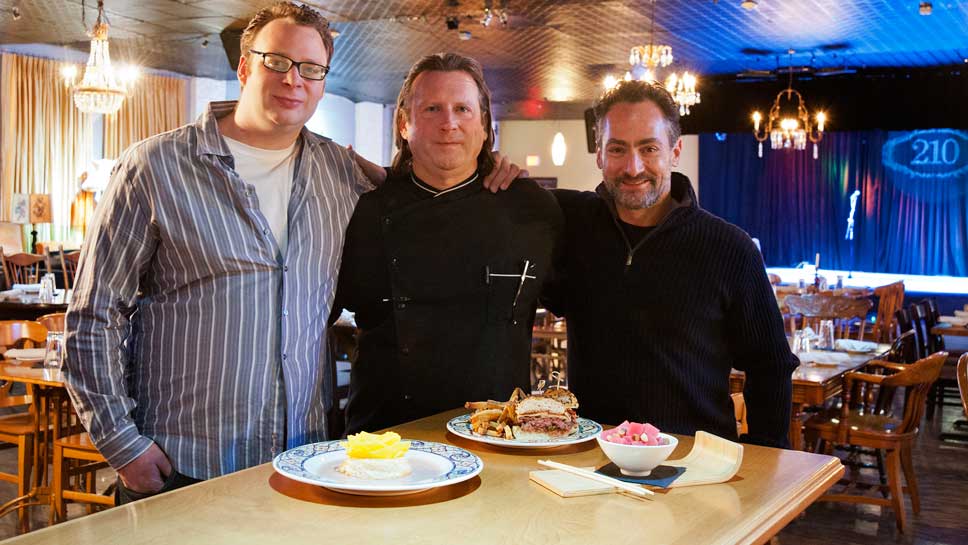 “I thought it was strange that Steve was showing me a bowling alley, so he explained that he owned the building and had wanted to do something with it for a long time,” said Tomchek who liked the space and offered to cook dinner for Goldstein and his wife at home.

Soon Tomchek began running the day-to-day operations at The Alley, and over a year later they decided to strike the bowling alley and continue focusing on live entertainment while dishing out a full menu.

“We were busy after 9 p.m. and doing private events, but the customers always wanted to bring in outside food,” said Goldstein. He explained that people would stop by The Alley after dining out at one of the other local restaurants late at night. “They weren’t interested in having dinner here because we were serving mainly pizza and simple bar food, but when Jeff came onboard as chef, we thought why not make this a real restaurant that’s also a nightclub.”

Tomchek said Goldstein’s wife is a “phenomenal” artist who’s responsible for all of the décor. “She bought the chandeliers and tables and piece by piece we put it together,” he added. 210 Restaurant & Live Music Lounge opened on the night before Thanksgiving 2015.

Tomchek and Goldstein are looking forward to celebrating New Year’s Eve at 210. “We’re having a cool buffet with lots of holiday things and it also happens to be Hanukah, so we’re doing some Hanukkah theme stuff,” said Tomchek. “I had a Jewish grandmother, so I’ve got latkes (potato pancakes) down.”

“It will be fun,” said Tomchek. “I look at like it’s my party, because a bunch of my friends are going to come.”

Goldstein agreed. “That’s what it’s like here every night — it’s like a party. People show up that have no plans single guys, single gals, and couples who are looking to go out and have a great time on a Friday or Saturday night,” he added.

Both Tomchek and Goldstein are musicians who play the guitar. While Goldstein has sat in with the Blues Jam, Tomchek prefers to mind the store. They have another business partner, Judy Shatkin who is an accomplished musician.

“Judy’s an incredible piano player and jazz musician and is really responsible for us getting this jazz thing going on Thursday nights where we’re getting these top acts coming in,” said Goldstein. She plays once a month on Thursdays with the Judy Night Trio and also plays with some of the different bands at 210.

Another great addition is pastry chef Marco Rodriguez. Tomchek met Rodriguez nine years ago when he walked into Green Acres and wanted to learn how to make cookies which was a daily ritual. Tomchek explained that it took a long time, but once he mastered the cookies he wanted to learn how to make pies, tarts and chocolate desserts and now he creates a variety of desserts with a flair for presentation.

“Marco is absolutely phenomenal,” said Tomchek. “He was the first person that I called up and said I need you here. It’s so much fun for me to see someone who’s gone from struggling to make a cookie to creating his own pastries.”

Tomchek is also thrilled to be working with his son Raine Tomchek and the feeling is mutual: “I’ve worked with my dad before, but never in a restaurant that we opened together, so it’s been a wonderful experience,” he said. “It definitely has its ups and downs and frustrating moments, but I wouldn’t ask for anything else.”

In December, 210 began offering a senior special from 5 to 6:30 p.m. Wednesdays and Thursdays. It’s a $20 prix fixe Early Bird dinner menu that includes choice of appetizer, entrée and side dish. On the second Wednesday of each month, this special dinner menu will be served until 7:30 p.m. so seniors can stay to hear the Highland Park Pops Big Band. Tomchek said the senior special will continue in 2017.

“The idea originated when a lady wanted to bring in 80 seniors for dinner on a night when we were featuring a big band,” said Tomchek. “We offered a prix fixe menu, the seniors were dancing and it turned into this big party.”

Another popular entertainment venue is tribute shows. “Recently, we featured a tribute to Woodstock with songs from Janis Joplin, Joe Cocker, Jimi Hendrix and other artists,” said Goldstein. “They followed in the same order that the performers went in Woodstock in 1969. They were phenomenal and the same producer is doing a David Bowie tribute on January 6th.” Other tribute bands will also be performing in 2017.

Goldstein explained that some nights there is a cover charge depending on what the talent costs. “People like to have dinner with us, get comfortable on the couch, and go out to the dance floor,” he said. “210 is a space that feels like somebody’s home,” he added. 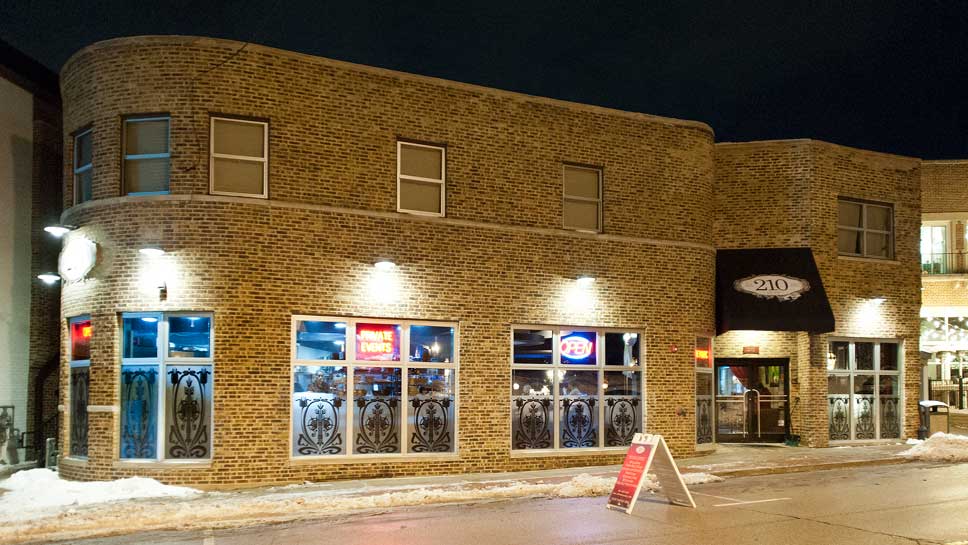 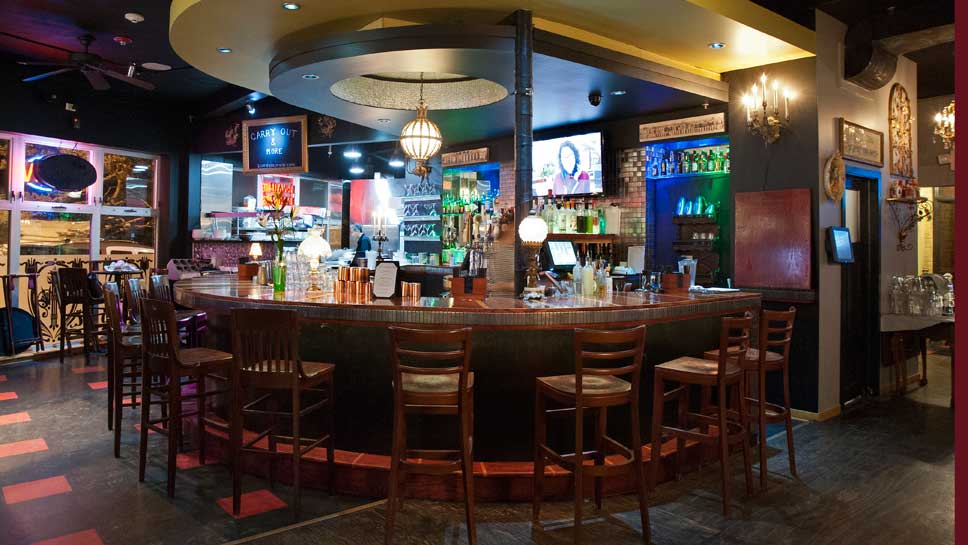 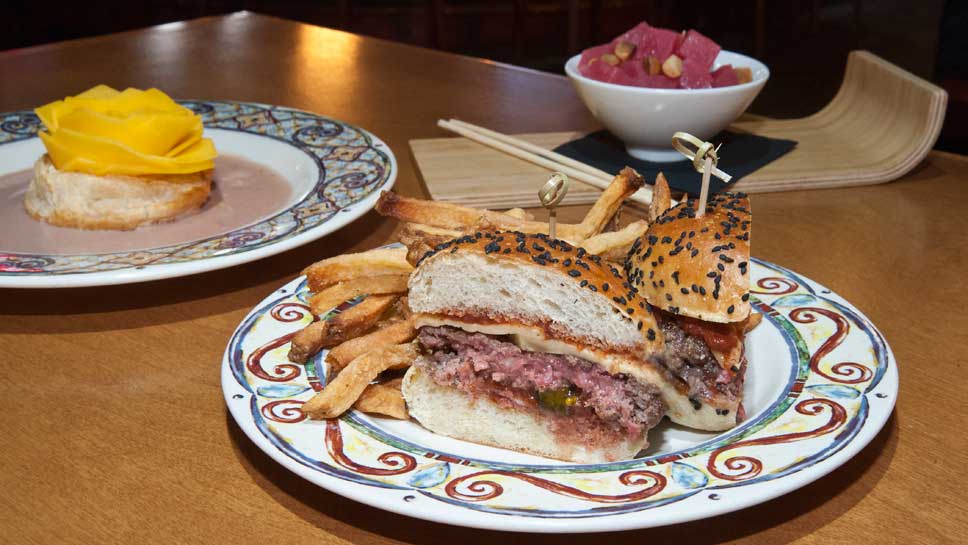 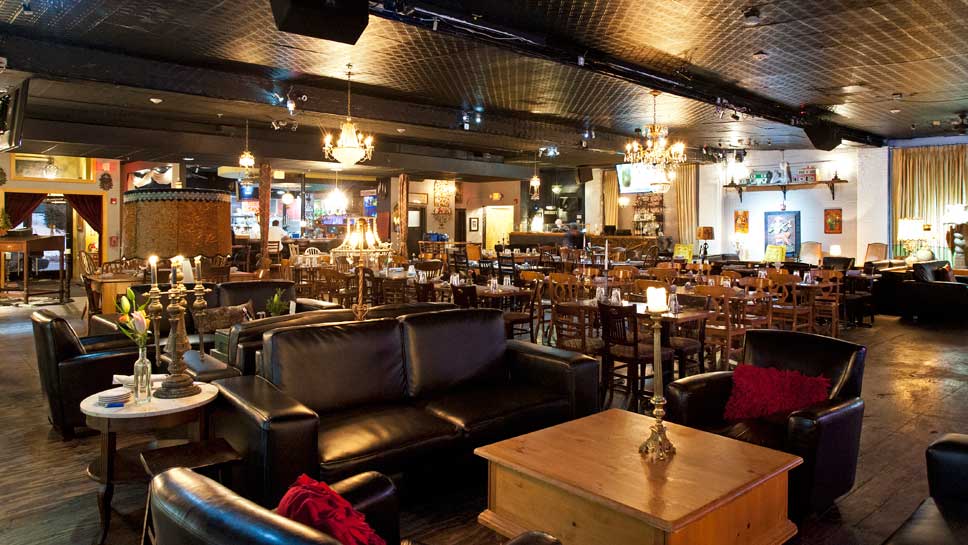 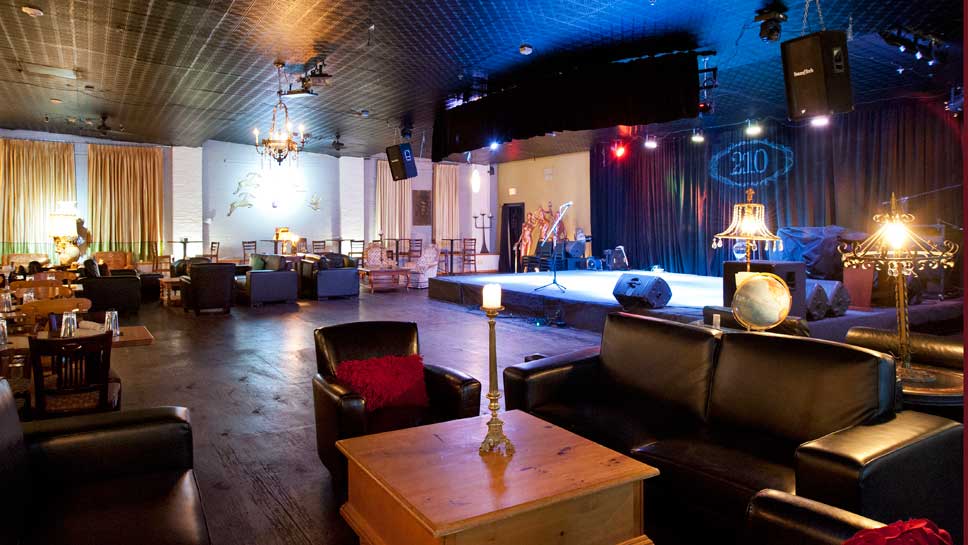 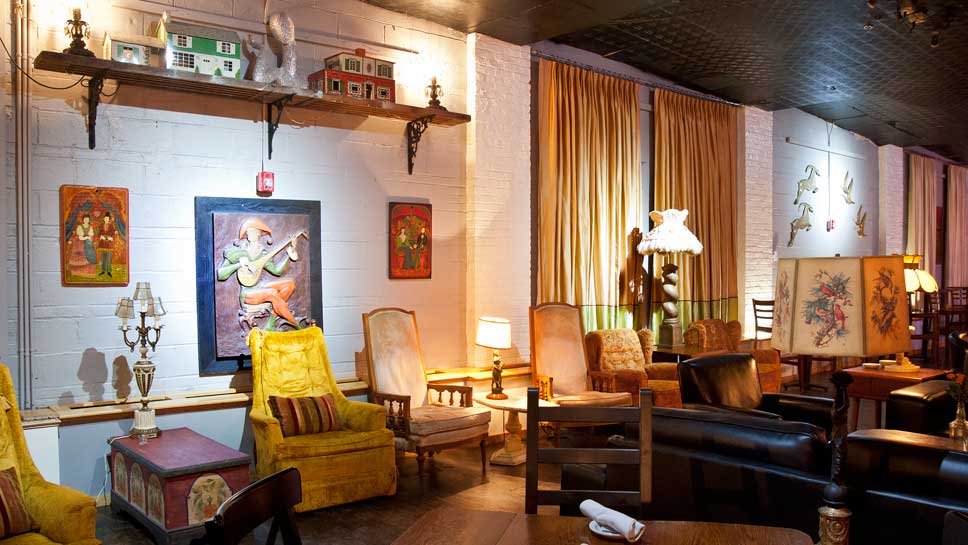 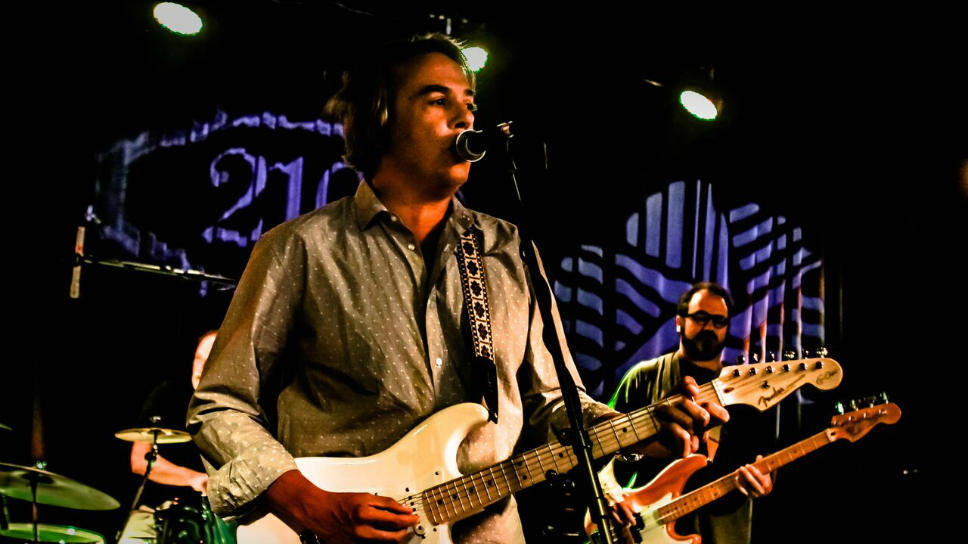 Rollover is one of the bands that will be performing at 210 Restaurant & Live Music Lounge; Photo courtesy of Kurman Communications, Inc. 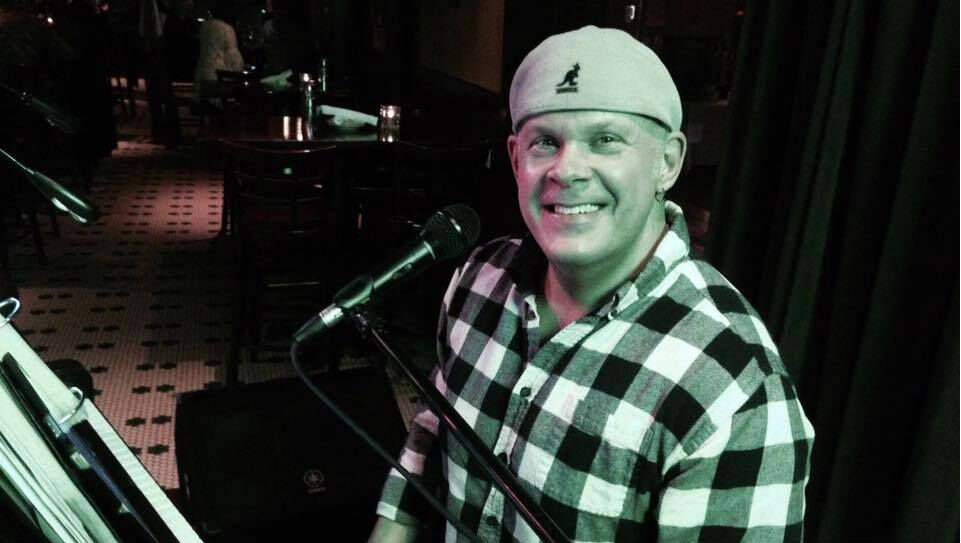