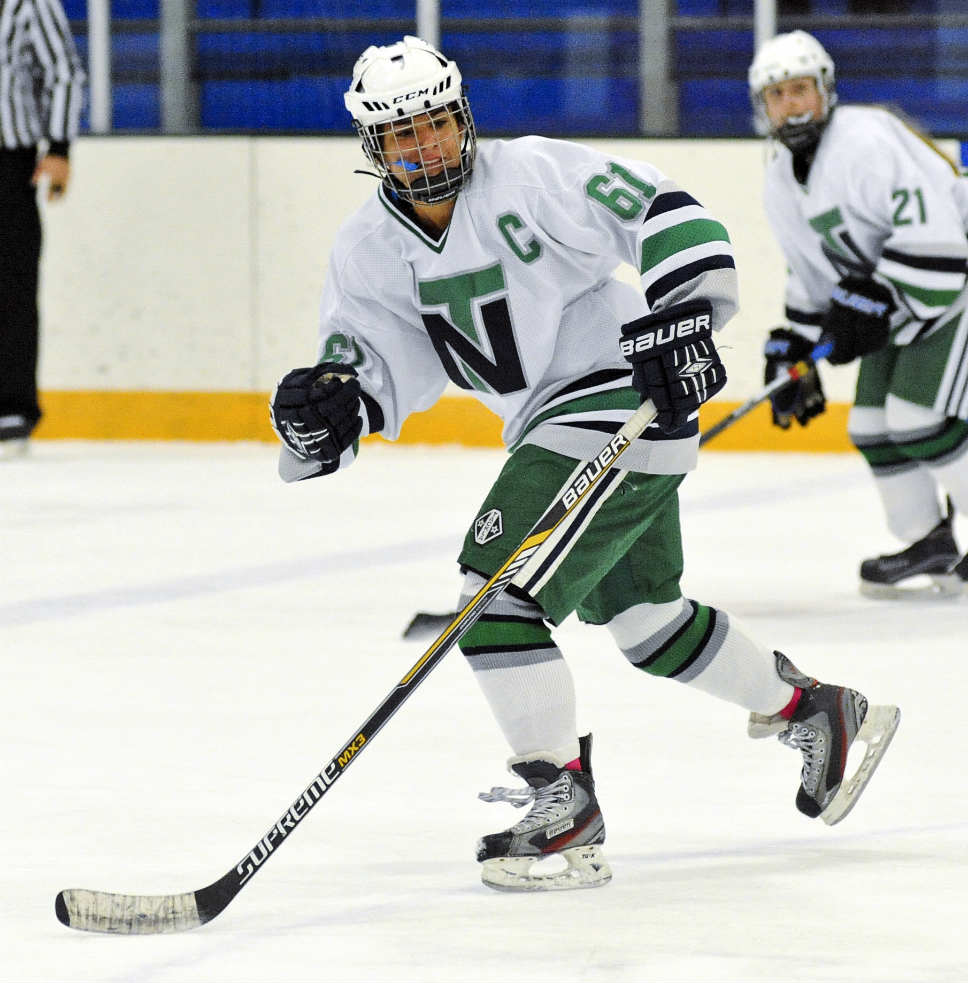 Isabelle Sennett, seen here during an earlier game this winter against Fenwick High School, is a three-time all-stater for New Trier’s hockey team. She also stands out in field hockey and lacrosse. PHOTOGRAPHY BY GEORGE PFOERTNER

Her target each time was a teammate.

Each teammate was using a cell phone in a locker room at the time. A no-no. It’s hard to focus on hockey when you’re texting a message or talking.

“I aimed low each time,” Sennett, a senior center and NT’s captain, said. “I didn’t want to hit a face.”

The creative enforcement of the team rule worked.

“They all,” a smiling Sennett said, “put their phones down.”

She puts a stick down, but only because she has to pick up another.

“I was shocked when I made the JV field hockey team as a freshman,” the 5-foot-5 Sennett said. “Huge shock.”

Her one-word reaction to that special triple?

“The competitiveness of each sport at New Trier,” she added, “is something I’ve enjoyed each season. It’s intense, being an athlete at our school. Every team, it’s go, go, go. I love it. Playing the sports I do, each has helped me in the other two. I know how important speed is in field hockey, in ice hockey, in lacrosse. You have to think quickly in all three.”

Sennett claims a shelf at home supports all of her awards.

Say a prayer for that shelf.

Though she has verbally committed to play lacrosse at Amherst University, Sennett is all about ice hockey in the wintertime. Her team is 7-4-1. She paces the team in points (eight goals and 10 assists, through Dec. 18).

“She sees the ice well, sees the whole situation when she’s playing,” NT senior forward and assistant captain Tommy Solberg said of the middie in lacrosse and the defender in field hockey. “Always knows where to be. She passes well, even when she passes the puck behind her. But what we all really like about her is the way she connects with all of us. She’s fun. She’s funny.

“We carpool. One of her favorite things to say in the car is, ‘Let’s get food!’ ”

Steak ’n Shake is her favorite haunt. It’s where Sennett likes to order a steak sandwich, plain, with fries. Iced tea chai latte is her go-to beverage at Starbucks.

Delicious fare on a rink is an effective pass in Sennett’s world. Each member of the line featuring Sennett and wings Meghan Dwyer, a sophomore, and Mae Olshansky, a freshman, is a pass-first-celebrate-a-teammate’s-goal-later skater.

“I love my line,” Sennett said. “I like to go hard and fast to the net, but I like to pass just as much. We all like to pass.”

New Trier girls hockey coach Nelson Forsberg likes Sennett. As a captain, as a skilled player, as a fun-loving teen. Sennett gets it. Sennett gets the value of balance. Her serious side on rushes is just as important as her engaging side in off-ice moments.

“She’s talented, with a lot of heart and energy,” Forsberg said. “Good at passing, good at finishing. She does a nice job of pumping up the girls and keeping them pumped. She’s taking her leadership seriously, and teammates gravitate to her.”

“I wrote my college-application essay about that game,” Sennett said. “It didn’t matter, my lack of scoring. That didn’t bother me. The focus in that game was finding ways to give my teammates chances to score. That was such a big win for our program.”

Isabelle’s twin brother, Matthew, a club lacrosse player, is Bucknell-bound. Isabelle has two older sisters and a 13-year-old sister, Gabriela, an eighth-grader who plays lacrosse and ice hockey and the cello. Isabelle’s mother, Carolyn, is convinced Isabelle will flourish in a career that doesn’t exist today.

Then there’s Michael, Isabelle’s father. Isabelle figured he has missed only three of her ice hockey games. Their favorite post-hockey pastime is to discuss details of each game in the kitchen at home. The discussions are typically lively and sometimes loud.

“We like to banter,” Isabelle said. “It’s usually 11 p.m. when we banter. You should hear us, the way we go at it. We wake everybody up.”

What Sennett hopes to put to rest for the rest of the ice hockey season: rubber-ball tossing. 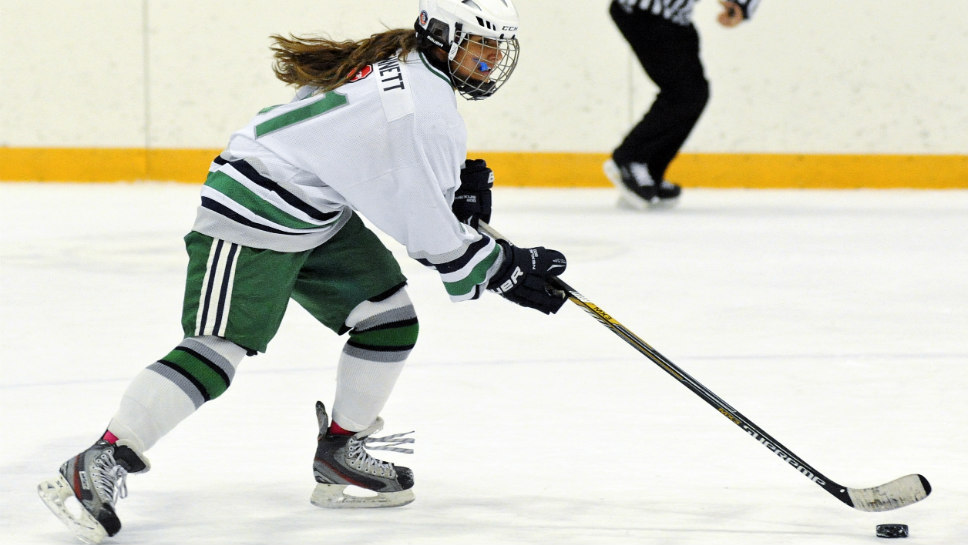