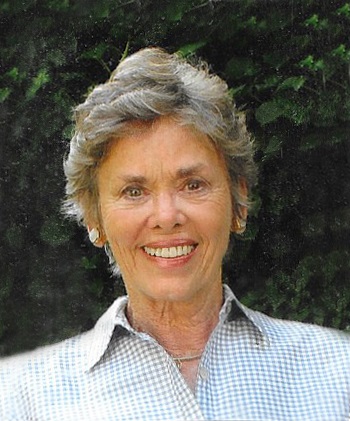 “Mel” Brown, daughter of the late Frank and Alnora Lathers, and loving wife of Jackson D. Brown, passed away at their home in Lake Bluff, IL after a long, brave battle with cancer. She is survived by her husband “Jack,” son Perry and daughter Alison. She is also survived by daughter-in-law Francisca and three grandchildren: Ford, Olivia and Felix.

Mel was born and raised in Maple Bluff, WI and attended the University of Wisconsin; she was a member of the Delta Gamma Sorority and graduated with a major in Journalism. In the early 1960s, she moved to Chicago and got her first job as a copywriter for Marshall Field & Company where she worked on fashion advertising and other retail efforts. Mel’s next job was at the iconic advertising agency, Leo Burnett, during the “Mad Men” days, where she was one of the first female copywriters hired by Leo himself. She did award-winning advertising for Brown Shoe; also worked on Campbell Soup and other major accounts; and, it was at Burnett where she fell in love with Jack, an account executive at the company.

They married, later moved to Lake Bluff, IL and had two children (both of whom later took up careers in marketing and communications). After Burnett, Mel continued to work as a freelance copywriter for several companies including Chappell Lockhart and the Lake Forest Shop. She also volunteered for the United Way, AYSO, Lake Forest & Lake Bluff Open Lands Association, Lake Forest Garden Club, Women’s Board of the Lake Forest Hospital and was President of the Lake Forest Chapter of the Infant Welfare Society. Further, after the couple’s retirement in 1999, they built a second home in Dataw Island, SC where they spent the winter months and formed many new friendships.

Mel added to her volunteer work by becoming a member of the National Society Daughters of the American Revolution and the National Society of the Colonial Dames of America; and she and Jack were on the Council for the National Trust for Historic Preservation. Even in retirement, Mel remained a very active person; either playing tennis, platform tennis or golf. She also loved to read, fish, travel and to do the New York Times crossword puzzle every day.

She will be greatly missed by her family and friends.

A Memorial Visitation will be held on Friday, January 6, from 5:30-8:00pm, at Wenban Funeral Home in Lake Forest, IL.

A Memorial Mass will be held on Saturday, January 7 at 11:30am, at the Church of St. Mary in Lake Forest, IL.