HIGHLAND PARK – The word special comes to mind when describing Ruby of Siam. The food is cooked special order, on Christmas the menu will feature specials from Thailand, and movie fans will receive a special 10 percent discount with a ticket stub from nearby Renaissance Place Cinema. But what’s most special about Ruby of Siam is the family bond.

“Everyone bows down to my dad and has their game face on when he’s in the kitchen,” said owner Iris Dhalawong about his dad Pallop Dhalawong, who runs the Skokie Ruby of Siam restaurant with his wife Sunipa Dhalawong, and often helps out in Highland Park. “He’s an artist who’s all about looks as well as taste. My dad does it so fast and effortlessly. He’s trained all of our chefs and whenever I need help he drives right over from his home in Wilmette.”

The senior Dhalawong helped his grandmother cook as a child in Thailand, and brought her recipes with him to the states.

It’s a family affair, as Dhalawong’s wife Sana Khan also helped out in the restaurant, before she gave birth to their five-month-old son, Bilal, who was born with a naturally spiked hairdo. 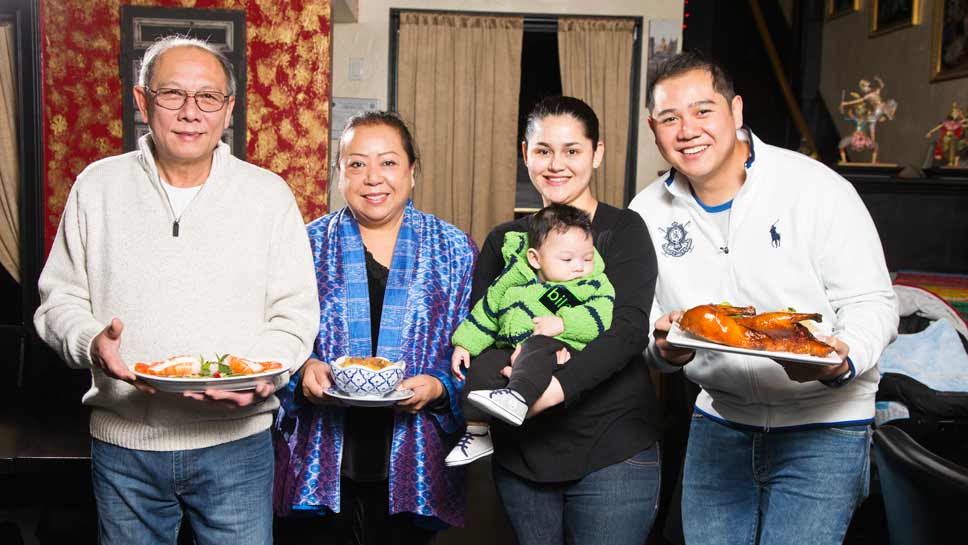 Khan said Bilal means “a leader on a good path” in Arabic.

“And he also brings people together,” said Dhalawong. “We’re a mixed culture family and to bring two families together is a very hard task to do. When he was born our families melded quickly together, and that’s why we thought the name was so fitting for him.”

Bilal’s colorful monogrammed sweater was a gift from a loyal customer, said his proud parents who are grateful for the wonderful toys and gifts they’ve received from their generous customers. The couple recently moved to Highland Park, because Dhalawong wanted to be close to work and wants Bilal “to have a community.”

The Highland Park community has been “very kind to Ruby of Siam,” he said, though it wasn’t apparent when they first opened the restaurant on July 4, 2015. He added that everything changed once the customers became “more vocal about what they want and they come back, because they know we’ll remember exactly how they like their food cooked,” said Dhalawong. “It’s a really old-fashioned restaurant-style concept and I want to thank the community for understanding and working with us.”

In addition to their menu that features 120 Thai items, Ruby of Siam will offer a special Christmas menu with new recipes that Dhalawong’s parents discovered on a recent trip to Thailand. The specials will include: Jumbo Shrimp Green Curry, Massaman Curry Steak, Traditional Basil Chicken with Fried Egg over rice, and Chilean Sea Bass on Skewers with peanut sauce.

The Sirloin Steak Massaman Curry is a peanut-based curry, which was ranked number one on CNN’s Worlds 50 Best Foods List. “The meat is steeped in peanut coconut oil for a long time until it gets very soft, and it’s served with potatoes and peanuts,” said Dhalawong.

Dhalawong described the difference between green curry and massaman curry: “Green curry is based off of the basil leaf. It’s all herbal, and massaman is a peanut-based curry, so the sweetness of the peanuts offset the spice. We took the two least spicy curries, so that people could try them,” he said. 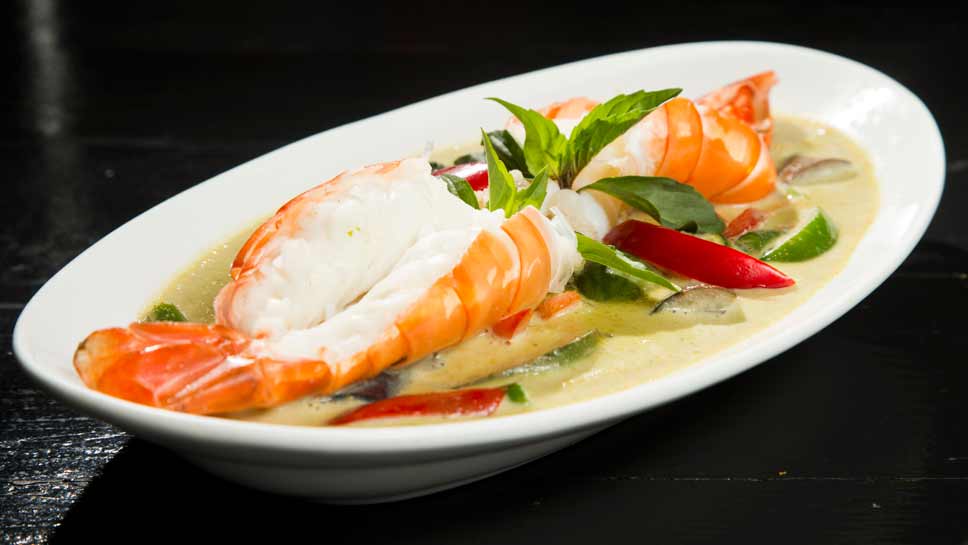 The most frequently ordered dish in Thailand is Basil Chicken served over white or brown rice topped off with a twice-fried egg, fish sauce and chili. “The natives eat this special basil chicken dish for breakfast lunch and dinner and I wanted to share it with our customers,” he said.

Dhalawong revealed their secret to success: “Every dish is made special order, which is the biggest reason people come to us. We make everything with fresh organic vegetables, and make it a point to help people with allergies.” They also offer gluten-free options, and are vegetarian and vegan friendly. 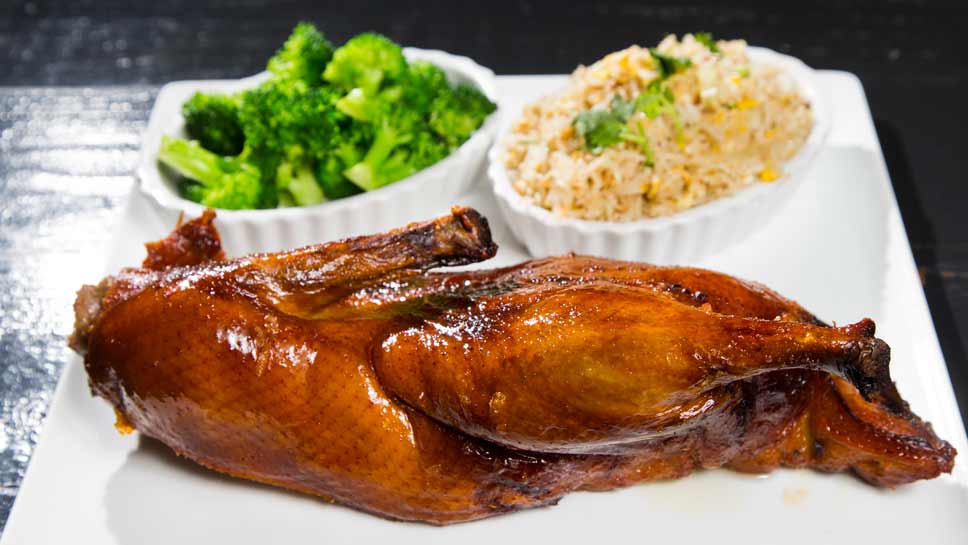 Dhalawong explained that because Christmas is their busiest day of the year, Ruby of Siam will only accept reservations for parties of eight or more. “It will be first come, first serve, as even with reservations people were still lining up outside last year,” he said. “People can always call in and see what the wait is.”

For a holiday treat with a kick, Dhalawong created the Christmas martini with a sriracha candy cane that he crushes into a fine powder to coat the rim of the martini glass. The drink is made with Fireball cinnamon whiskey and white rum. “It comes out reddish with a spicy peppermint flavor and a candy cane inside,” he said.

To celebrate the New Year, Ruby of Siam will offer a New Year’s Eve special: customers who order two entrees and an appetizer will receive a free bottle of champagne. Last year they didn’t have their liquor license in time for New Year’s Eve, said Dhalawong who is trying to accommodate people that eat dinner at the restaurant on their way downtown by train before the clock strikes 12.

Ruby of Siam is located at 1849 Second Street in Highland Park. For reservations or to place carryout orders call 847/433-9332. 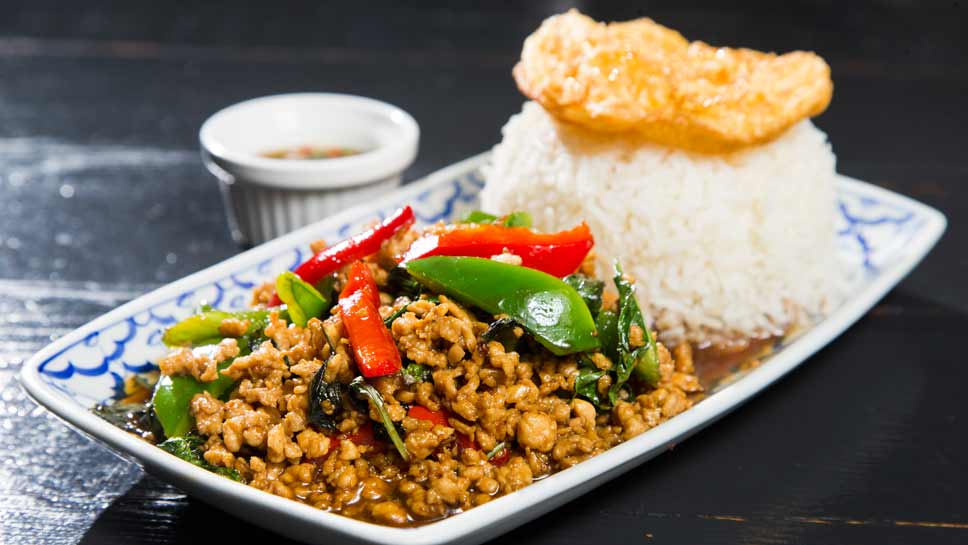 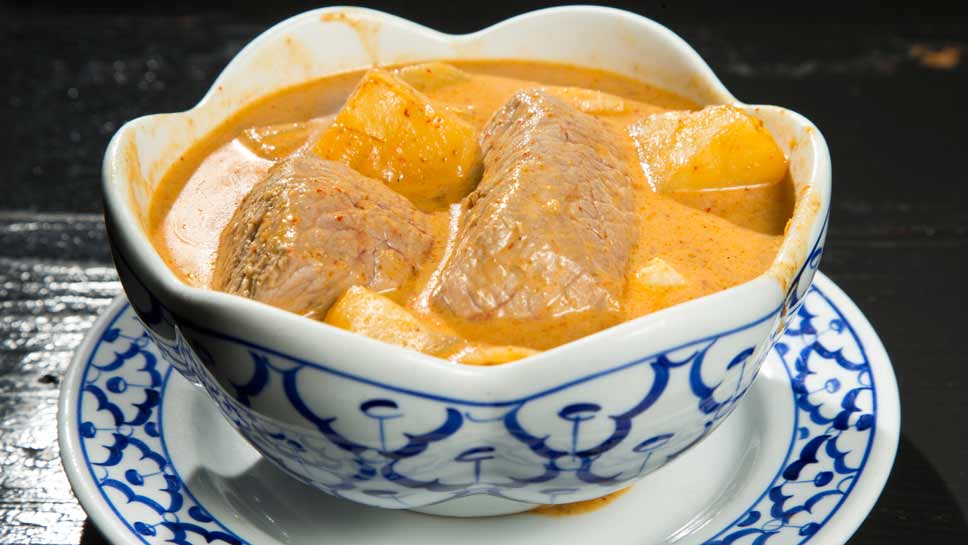 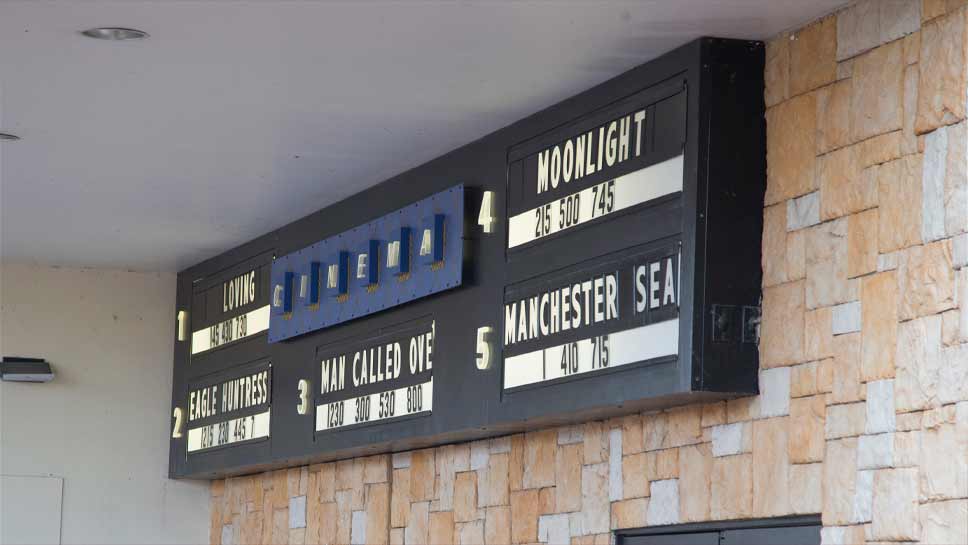 Ruby of Siam offers a discount to patrons of the Renaissance Place Cinema across the street.