Among more than a dozen events organized or attended by students at the two schools from December 12 – 17, one was a holiday party for refugee children in Chicago where Glenbrook South Key Club members helped kids with homework and craft projects.

One of the children at the party was Samaa Jamoos, a third grader who arrived in the United States six months ago from Damascus. She was painting with water colors under the tutelage of Glenrook South sophomore Hailee Bilimoria while they communicated easily in English

“I learned it in school,” said Jamoos in a Midwestern accent. “I listen to what it sounds like.”

After living on the North side of Chicago for six months, Jamoos said she sees a huge difference between her new home and the one she and her family left behind.

“They don’t have a war here,” said Jamoos in a serious tone. “You don’t have anyone dying every day somewhere.” 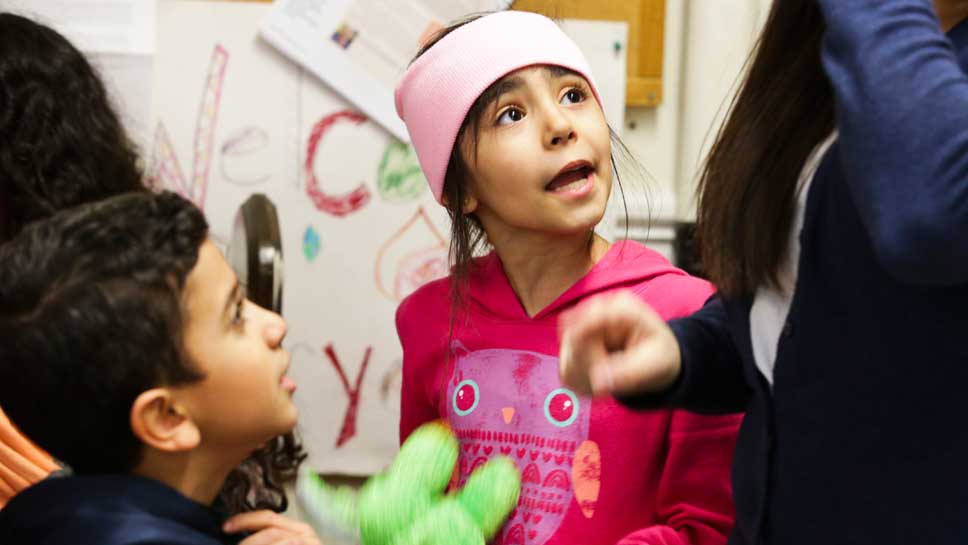 Not long after that, Santa Claus arrived and the children gathered around as he handed out presents. Jamoos sat in the front row occasionally touching Santa on the knee waiting for Melissa Janisch, the youth program coordinator with RefugeeOne, to call her name.

“I’m going to play,” said a smiling Jamoos holding her new stuffed animal. “This is fun,” she added about her first encounter with Santa Claus. She said she is a Moslem and never experienced Christmas before.

“Santa and the presents are very cool,” added Akram Abedat, a second grader who arrived in Chicago from Daraa, Syria, just over a year ago. “I learned English in School. I learned it very fast.”

RefugeeOne helps settle people fleeing oppression and worse, according to Janisch. She said the Organization assists the families’ adjustment helping adults develop skills to find work and the children get comfortable in school.

RAK (Random Act of Kindness) Week is about much more than the holiday party for refugee children, according to Josh Koo, a Glenbrook South science teacher and the Key Club advisor. He said the club, which is devoted to community service, has 500 members out of a student body of slightly more than 3,000.

Koo said RAK Week is in its fourth year with students in the club doing random acts of kindness around the community and beyond. He said two students were buying coffee in the Starbucks drive through when they were told the person in front of them paid. The chain eventually became 25 cars long.

“We want to spread joy to people in the community,” said Koo. “They are learning what it means to serve,” he added referring to what the students are taking away from RAK Week.

Along with the party for the refugee children, Koo said the students will have a “kindness ambush” December 17 around Glenview delivering goodie bags to senior homes, the Glenview Public Library, stores in The Glen, grocery stores and more spots.

This year RAK Week spread to Pleasant Ridge. Esther Storrie, the director of the Learning Resource Center there, heard what was going on at the high school and reached out to students there who once went to Pleasant Ridge. The teens were happy to help.

“They met with our fifth grade ambassadors and brainstormed,” said Storrie. “They came up with things to do they would not normally do.”

Storrie said each day has a theme with activities built around the idea. The week began December 12 with a kickoff assembly attended by Glenbrook South Key Club members. On one day they will bring quarters to school for the Debra Gelfand Fund—a charity specific to Glenview School District 34—and on another they will have lunch with somebody new.

“Hopefully they’ll make a new friend,” said Storrie. “We will give them some conversation starters like sports or their favorite ice cream flavor.” 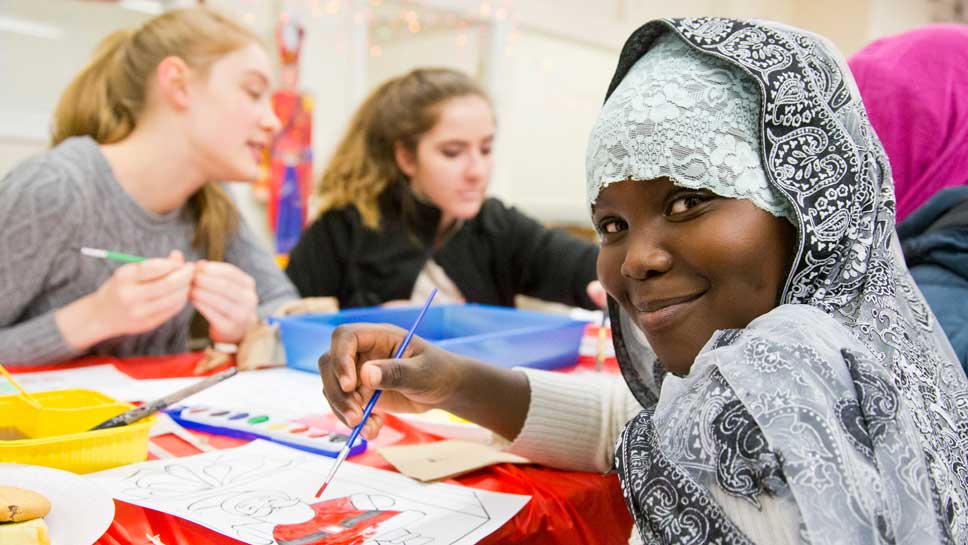 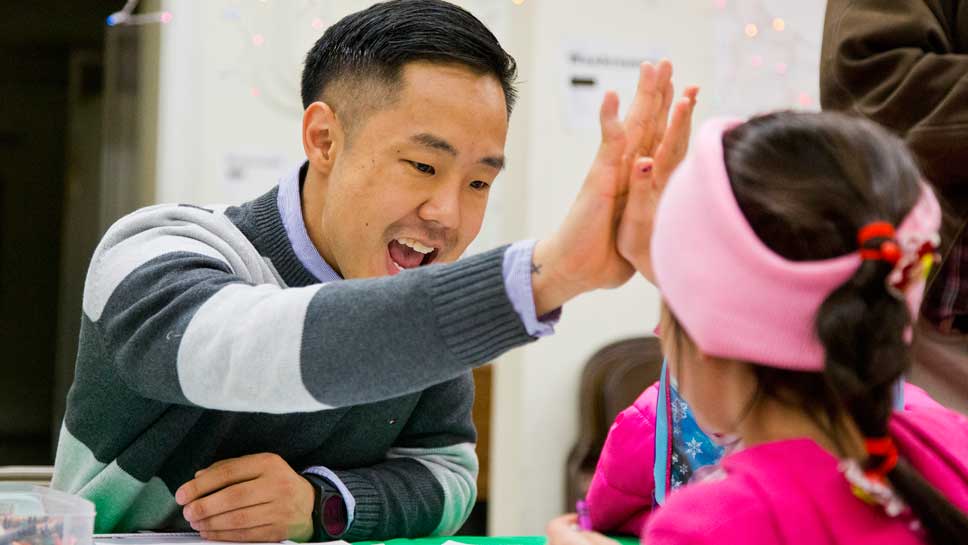 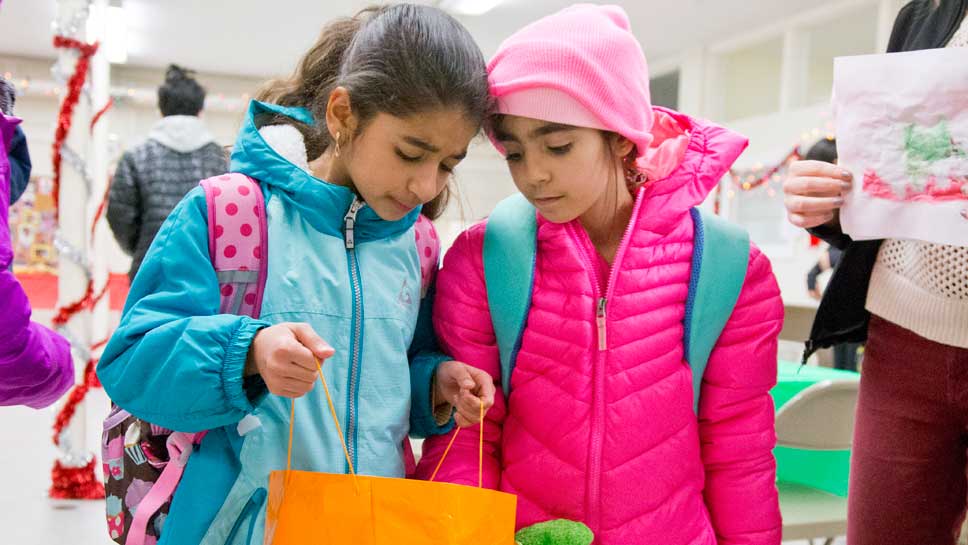 Retaj Abedat, 11 and Samaa Gamooc, 9 both from Syria, check out their gifts from Santa. 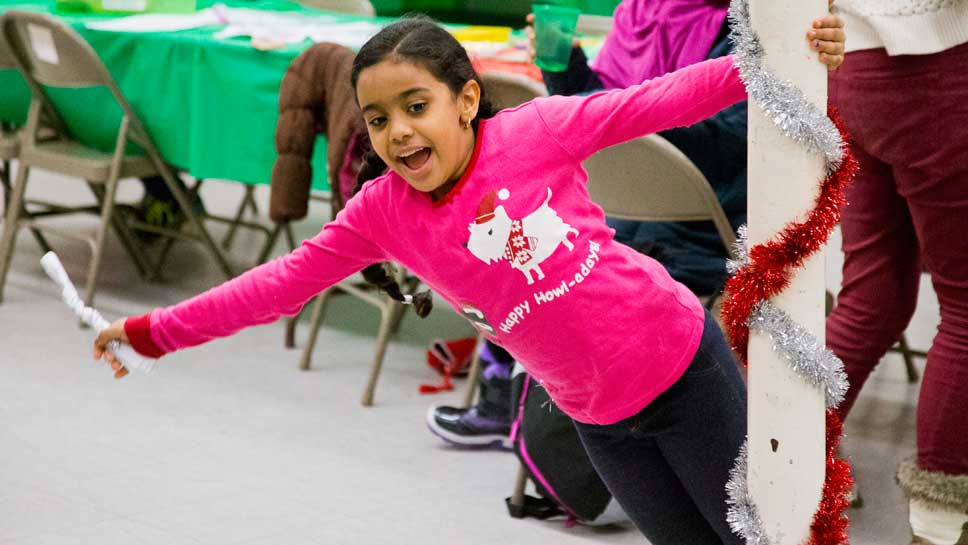 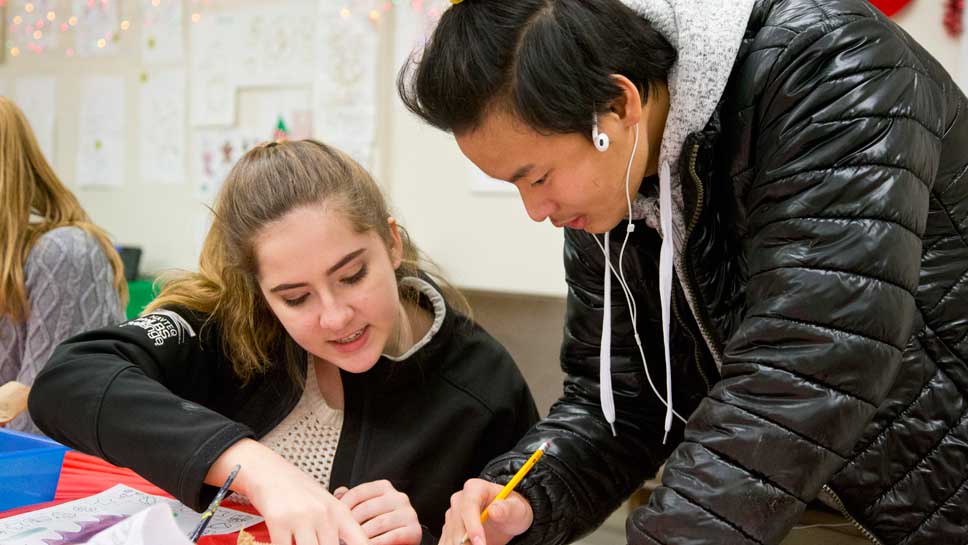 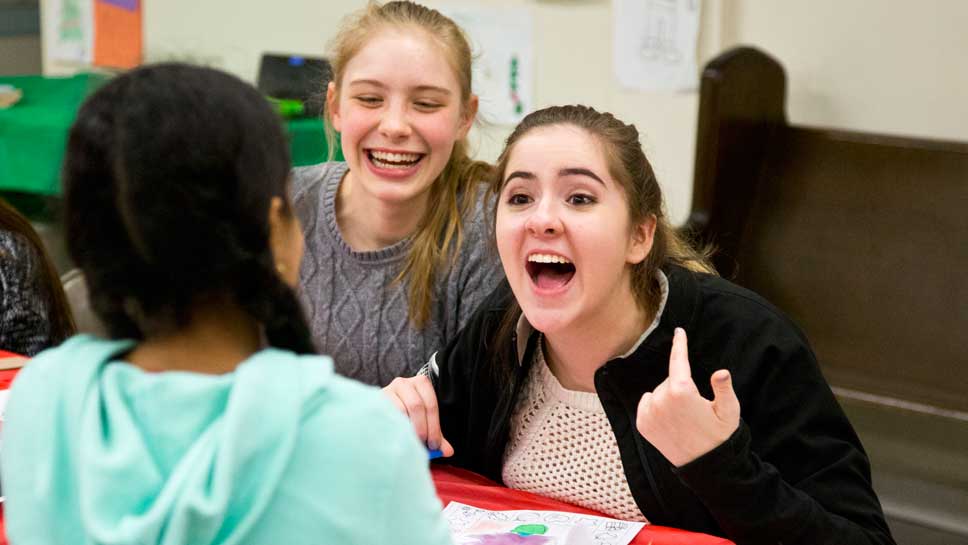 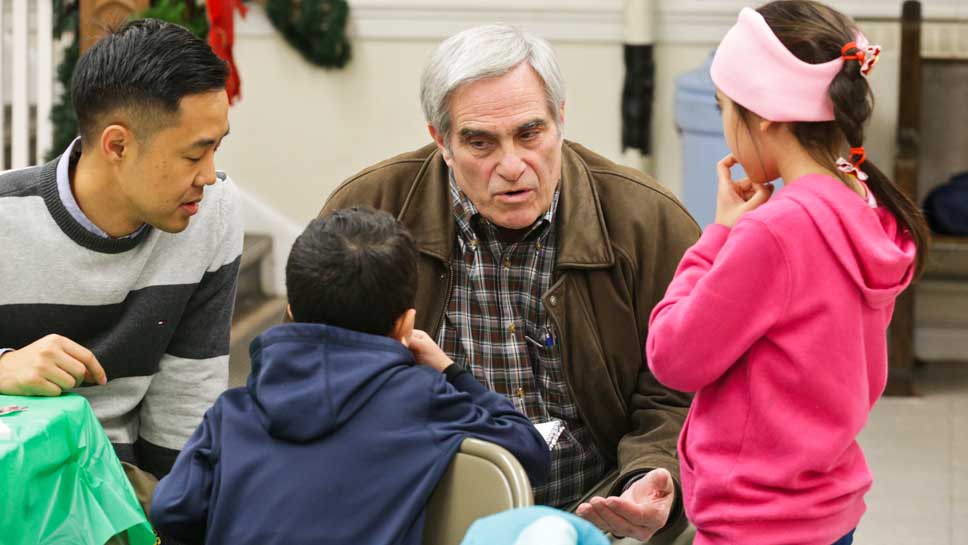 DailyNorthShore reporter Steve Sadin interviews some of the refugee children at the event. 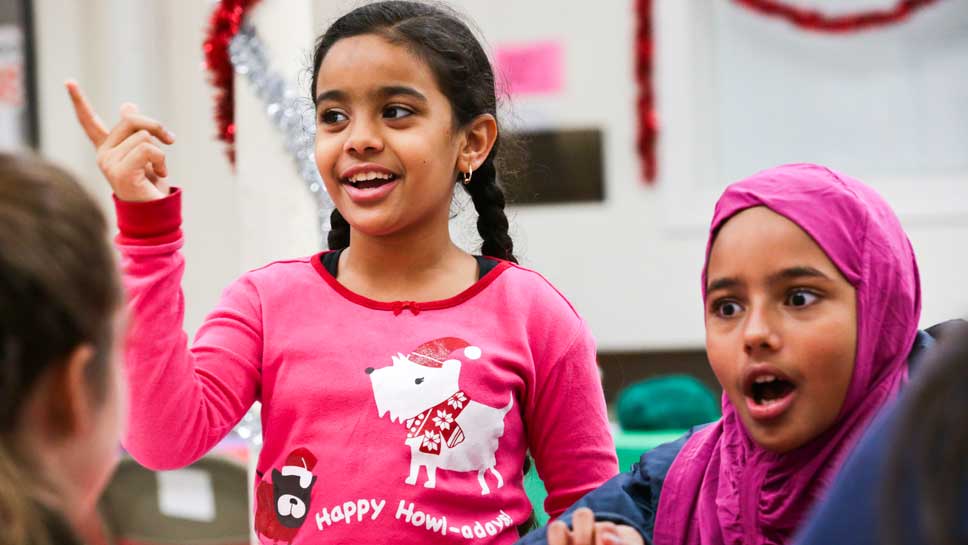 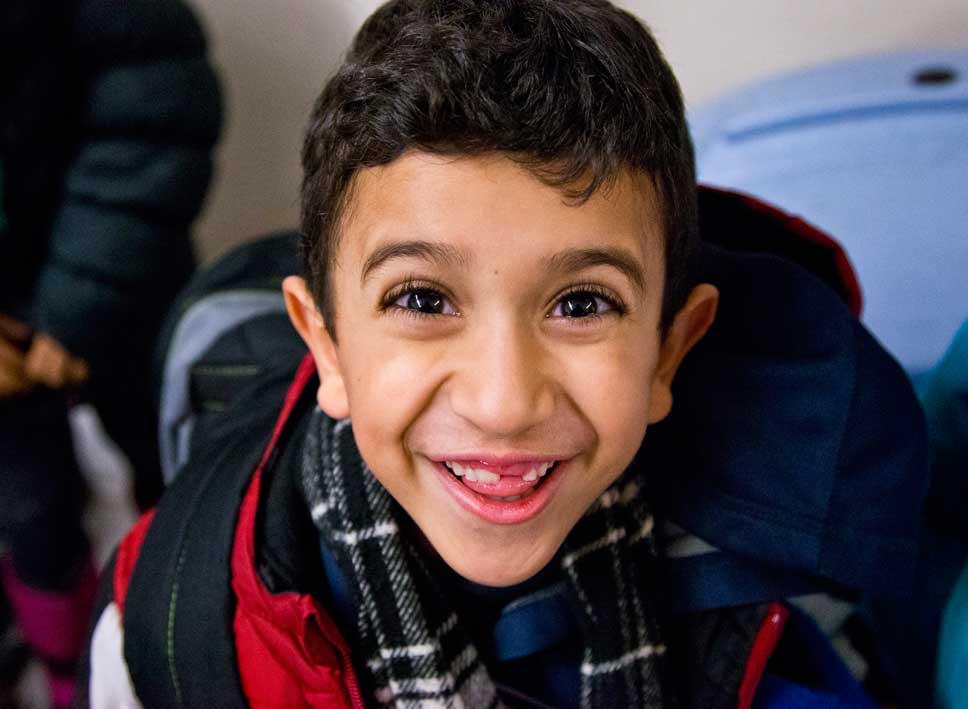 Aakram Abadan, 8 of Syria is all smiles during Glenbrook South’s Key Club visit. 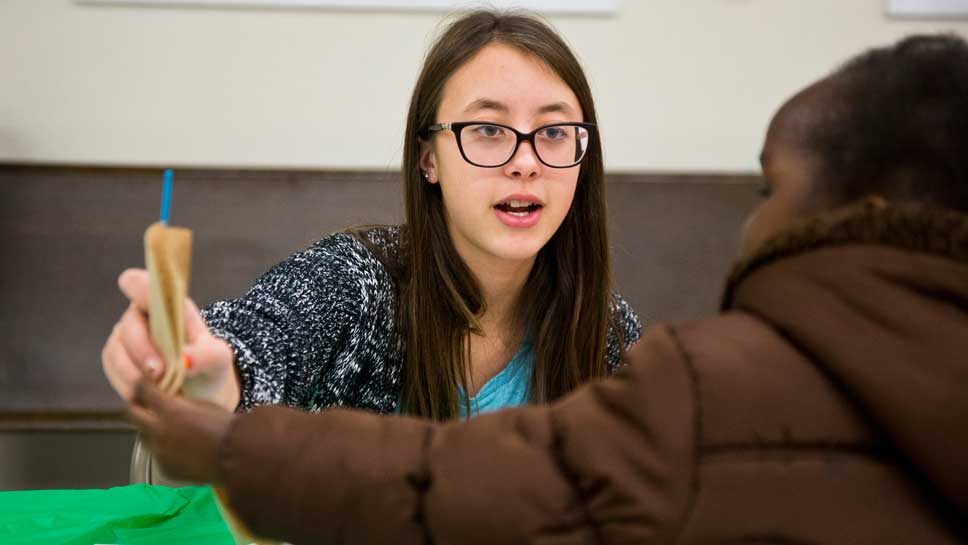