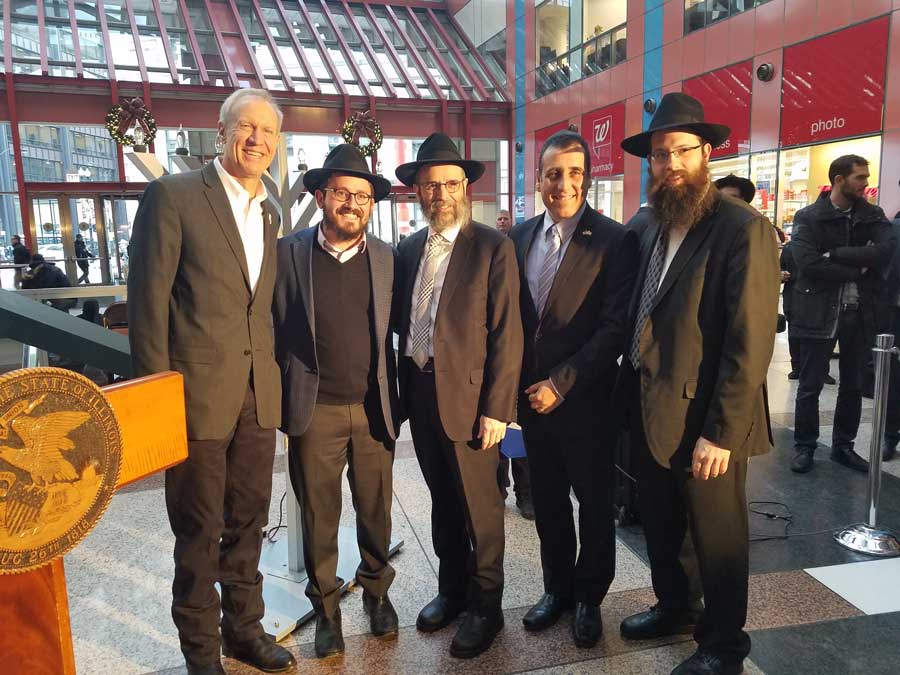 WILMETTE – ​Governor Bruce Rauner kicked off Illinois’ annual Chanukah Celebration at the James R. Thompson Center in Chicago on December 12. A Chanukah menorah will be on display at the Thompson Center from now until the New Year.

Governor Rauner was joined by Rabbis Dovid Flinkenstein and Moshe Teldon, ​​both of Chabad of Wilmette, Consul General of Israel to the Midwest Aviv Ezra, and other state legislators for a ceremonial dreidel spin. This year, Chanukah runs from the evening of Saturday, December 24 to the evening of Sunday, January 1.

“As families celebrate this year, they will light candles to honor the miracle of Chanukah and remember when light conquered darkness, good defeated evil, and freedom prevailed,” Governor Rauner said. “Today’s Chanukah ceremony has been a tradition in the State of Illinois for many years, and we’re thankful to Chabad of Illinois for helping us keep this tradition alive.” ​​

Local celebrations​ ​include the annual Chanukah Bowl at Wilmette Bowl on the first eve of Chanukah​, December 24 at 6 p.m. ​There’ll be open lanes, kosher Chinese bouquet and a one-of-a-kind Bowling Pin menorah. ​In addition the annual Winnetka Village Menorah lighting will take place on December 25 at 4 p.m. Both festivities will include traditional foods and Chanukah gelt and dreidels.​ ​

Submitted by Chabad of Wilmette