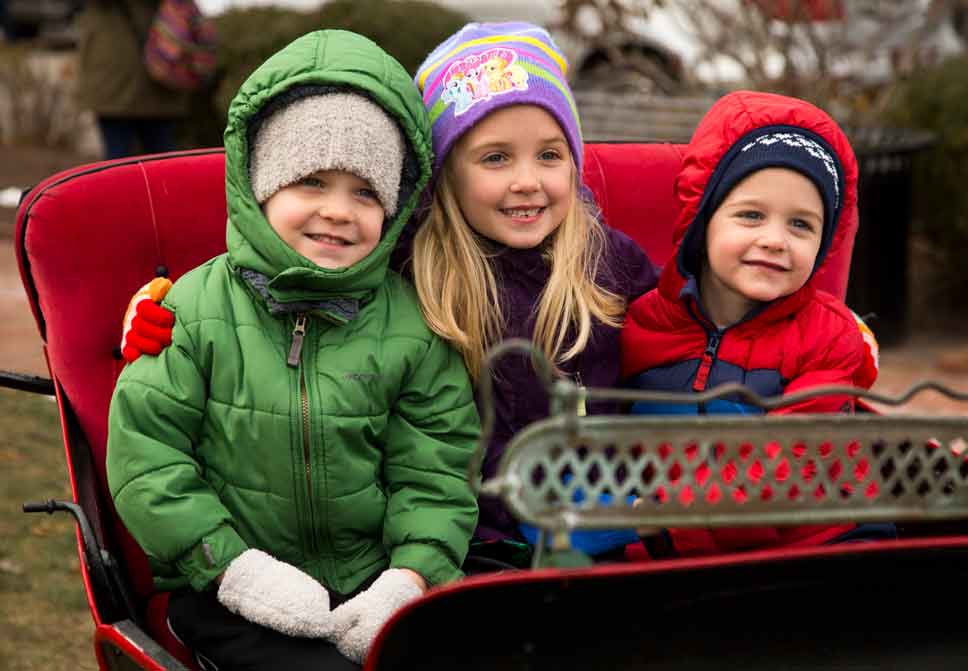 Delan, 4, Noa, 6, and Dillon, 4, Burke of Lake Forest pose in a sleigh at Market Square in Lake Forest on Saturday, December 10 .
Photography by Joel Lerner/JWC Media

LAKE FOREST — Children continue to let Santa Claus know what they want for Christmas, but some of their requests did not exist when their parents were doing the same thing.

The changes were evident when Santa landed in Lake Forest’s Market Square December 10, greeting more than 1,000 youngsters eager to tell him what they wanted for Christmas and get their picture taken with the jolly old elf.

“This is a chance for the community to get together and celebrate Christmas,” said Robyn Konlon, a spokesperson for Market Square. “It’s a lot of fun and we’ve been doing it here for years.”

Holden Lersch, 8, of Lake Forest, said he told Santa he wanted an iRobot he could operate on his own. Grace Donovan, 10 and a student at the School of St. Mary, asked for a 3-D printer.

Tom Donovan, Grace’s father, said he is amazed at the way youngsters are learning things that will help them later in life.

The importance of children developing their high-tech skills was not lost on Kelsey Field, a Chicago resident and public school teacher who grew up in Lake Forest. She brought her 8-month-old daughter, Molly Field, for her first visit to Santa.

“We’re preparing children for jobs that do not exist yet,” said Kelsey Field, who teaches math to sixth, seventh and eighth graders in Chicago. “We are teaching them the critical thinking and collaboration they need.”

For Kelsey Field the visit was significant in other ways. She and her daughter were there with her husband, Andrew Field, and father, Fred Hilger.

“Christmas is a special time for us,’ said Kelsey Field. “I was born on Christmas and that makes it very special.”

Hilger said he did not ask Santa for the best Christmas present he ever got.

“It was our daughter,” said Hilger.

Santa, who said he has been part of Christmas as long as gifts have been given, has seen plenty of changes too, though his elves have been able to adjust. He said some things stay the same.

“They have asked for a pony, a turtle and a snake,” said Santa about some more unusual requests. “A few years ago my elves used to make trucks for the boys and dollies for the girls. Now they make robots.”

The most frequently requested gifts this year were hover boards, according to Santa. That was affirmed by four Lake Forest youngsters—Cole Knutson, 10, Dylan Knutson, 9, Jackson Fredericks, 8, and Paul Fredericks, 11. It was on all their lists.

“It’s like a skate board,” said Paul Fredericks. “You lean a little to make it go (in different directions).”

There were some traditional gift requests as well. “I asked for a Barbie doll house and clothes,” said Billie Lersch, 6, Holden’s sister. 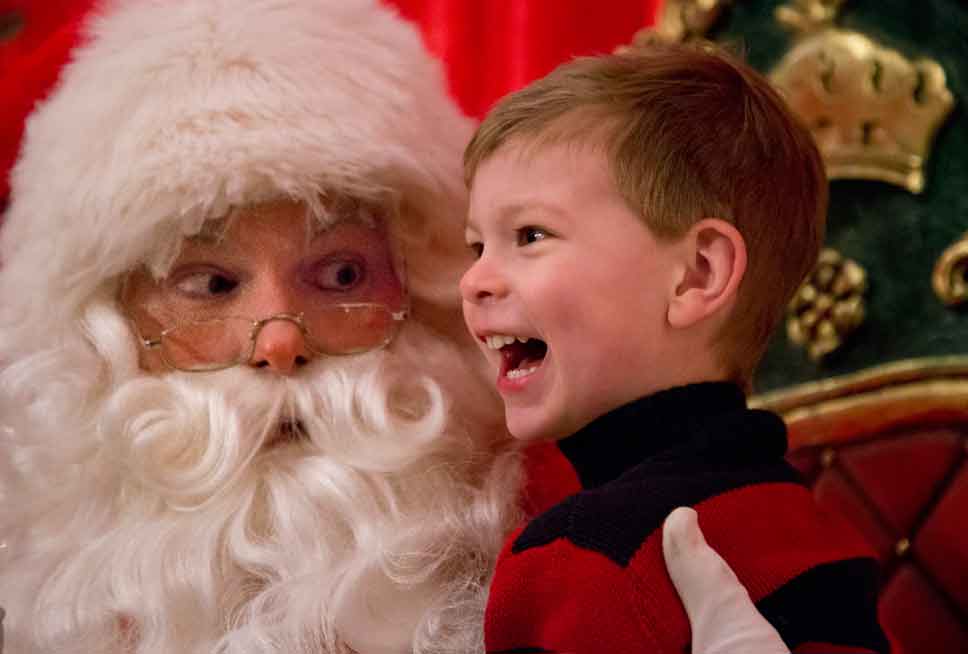 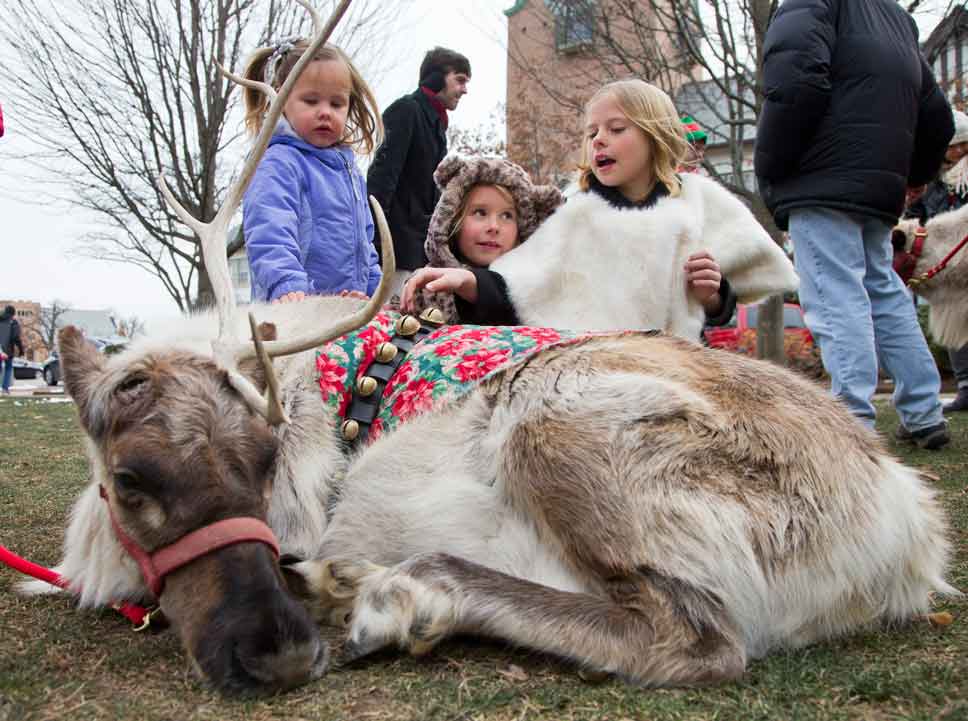 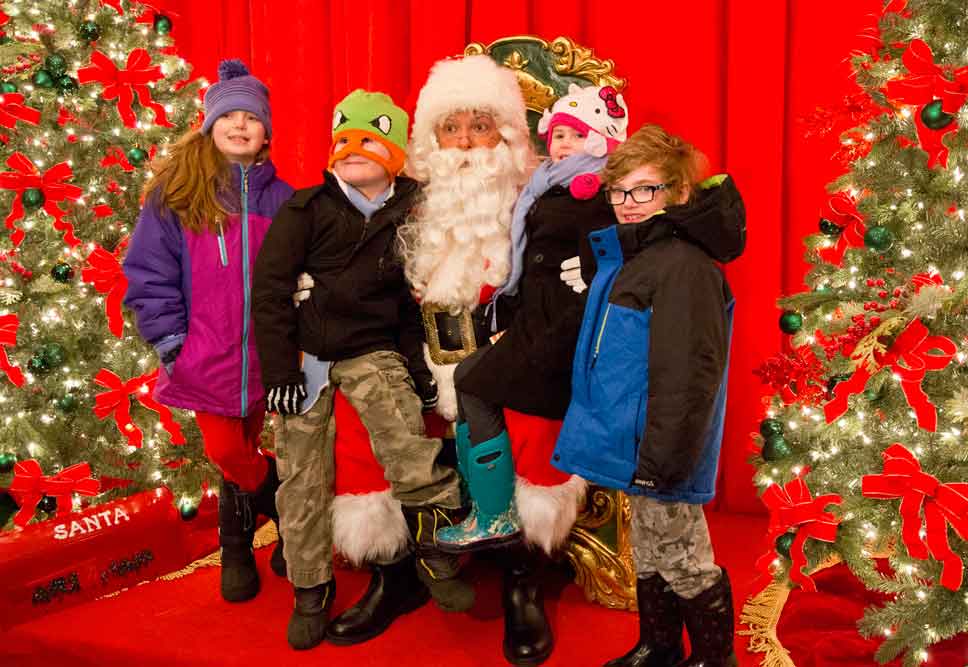 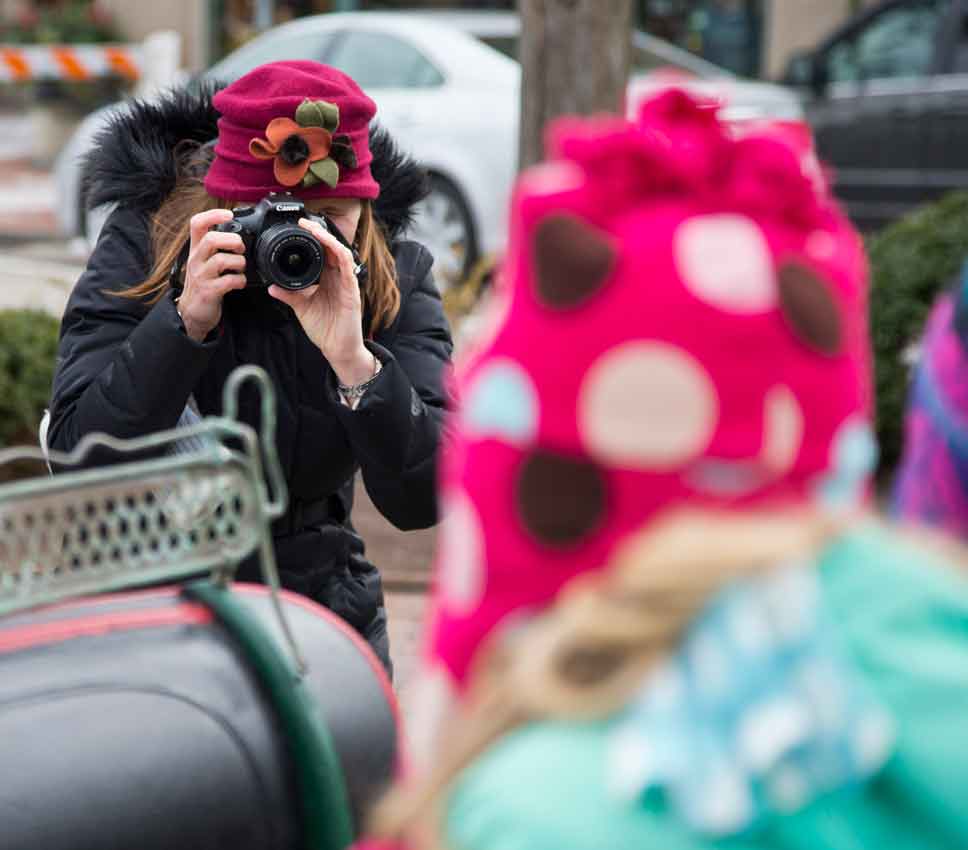 Emily McBean of Lake Bluff takes a photo of her kids in a sleigh at Market Square in Lake Forest on Saturday, December 10.
Photography by Joel Lerner/JWC Media