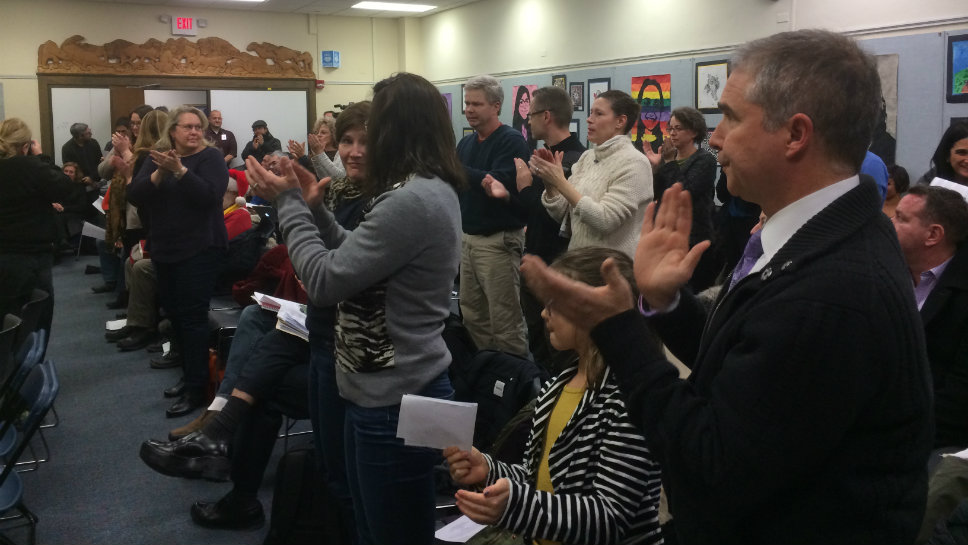 A crowd of more than 140 gave North Shore School District 112 board member Jane Solmor Mordini a standing ovation when she said the district’s school closing deficit reduction plan should be put on hold for a year.

HIGHLAND PARK/HIGHWOOD — Plans to close four North Shore School District 112 schools at the end of the current term downshifted into neutral on the heels of the December 10 resignation of Superintendent Michael Bregy.

The District 112 Board of Education voted unanimously December 13 at the District office in Highland Park to put the controversial plan known as BDR3 shuttering two elementary schools, a middle school and the early childhood development center on hold for a year.

BDR3 is an acronym for Budget Deficit Reduction Three, according to the district’s website.

The standing-room-only crowd of more than 140 people broke into a standing ovation when board member Jane Solmor-Mordini asked for the one-year pause. She was a strong proponent of the proposal to close Ravinia and Lincoln Elementary Schools, Elm Place Middle School and the Green Bay Early Childhood Development Center.

“The loss of the superintendent impairs our capacity to insure every detail is taken care of,” said Solmor-Mordini referring to Bregy’s departure. “We are now too vulnerable to any further unforeseen circumstances or distractions that could jeopardize our kids. I think we owe it to everyone to pivot and delay BDR3 for a year.”

Though the board voted 4-0 with Solmor-Mordini abstaining to accept Bregy’s resignation near the end of the meeting, he sent an email to the 112 community December 10 informing them he will become superintendent of the Beverly Hills Unified School District in California.

Bregy starts the job February 1, according to Mel Spitz, that districts’ Board of Education president, in a DailyNorthSore.com interview December 11. District 112 Board President Michael Cohn said in a DNS interview December 11 he learned of Bregy’s departure the day before.

Yumi Ross, another board member who favored the school closing plan, called for healing in a community bitterly divided over BDR3. “There will be bumps in the road and there will be disagreements,” said Ross. “We have to handle it with civility.”

Another call for detente came from Karla Livni, a board member who opposed BDR3. She said the emotional level of the community needs calm as the board and administration craft plans to solve problems that have not gone away.

Many of the more than 30 people who spoke during the public comment portion of the meeting disregarded their prepared marks, laying the paper down, and instead thanked the board for slowing down.

“I want to encourage all of us to pull together,” said Richard Liebman. “I ask the board to take a step back. In pulling the community together, please include as many stakeholders as possible.”

Kris Walker encouraged the board to take advantage of a community ready to help.

“There are 100 people in this room ready to help you out and move forward,” said Walker. “We can’t keep kicking the can down the road but we can’t grab it until we know what shelf to put it on.”

Not everyone talking was so generous. Sheri Henkel, the vice president of the North Shore Education Association teachers union, was critical of the attitude of people on both sides of the BDR3 debate.

“There has been a hotbed of hate and distortion no matter which side you were on,” said Henkel. “We must be kind and respectful to each other.”

Bregy’s resignation was not the only one announced at the meeting. With the room nearly empty and minutes before adjournment Samantha Stolberg, who chaired the meeting in the absence of Cohn, read a letter of resignation from board member Jacqueline Denham whose term expires in April.

Denham, a supporter of BDR3 said in her letter that she wanted to spend more time with her family but she also hinted the harsh discourse in the community and attacks directed at her played a role.

“I sincerely hope that the district finds a solution to its complex problems, but as the tenor of the discourse seems dominated by self interests, manipulation, nostalgia and even racial attacks, I must step away,” said Stolberg reading Denham’s letter.

Denham’s colleagues on the board said they were disappointed to see her go but also said attacks from the community were harsh.

“The level of hatred, bigotry and racism were at a level that was punishing,” Solmor-Mordini said. “She stood up for a lot of people who didn’t have a voice.”