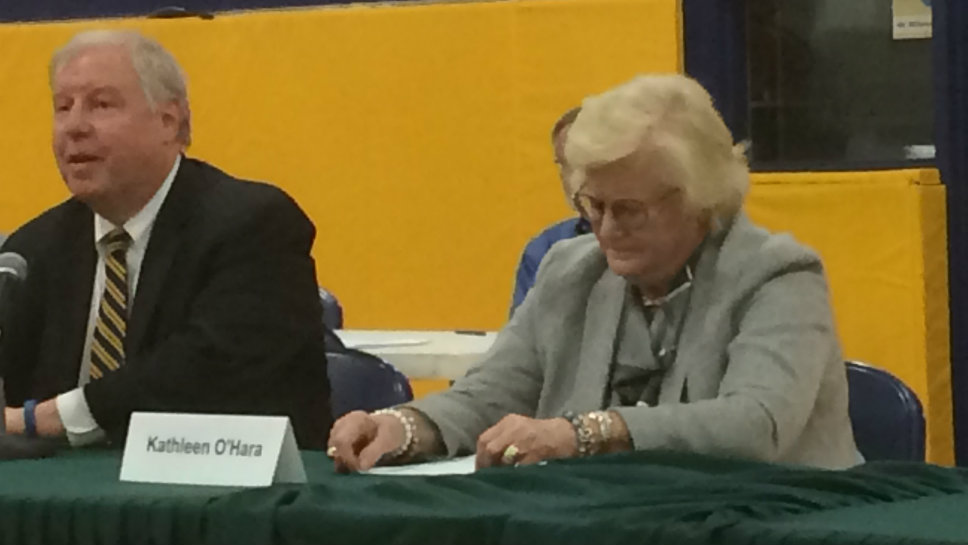 LAKE BLUFF — Village President Kathy O’Hara won the endorsement of the V.O.T.E. Lake Bluff caucus in her bid for a second term as president of the Village Board of Trustees in the April 4 election.

O’Hara earned 156 of the 230 votes cast by participants in the biennial town hall meeting of the caucus December 6 at Lake Bluff Middle School. Former Trustee Rick Lesser, the only other candidate, got 74.

Any registered Lake Bluff voter was eligible to attend the meeting and cast a ballot for president, members of the Village Board, the Library Board of Trustees and village clerk.

Lesser said in a DailyNorthShore.com interview after the balloting he will make a decision whether to run in the general election over the coming weekend.

“I already have more signatures than I need on my petition,” said Lesser.

O’Hara, Lesser and any other presidential candidates must file their nominating petitions between December 12 and 5 p.m. December 19 at Lake Bluff Village Hall, according to Village Administrator Drew Irvin.

O’Hara and Lesser debated their positions showing both differences and similarities before the participants cast ballots. After brief opening statements, they answered questions from the audience compiled off index cards and reviewed by members of the caucus administrative committee. Issues questioned included development and the tax base.

There was disagreement about the effect high priced homes have on the taxes existing homeowners will pay. The questioner wanted to know if higher assessed value would lower taxes for those with less expensive property.

“No,” said Lesser. “People who move into new construction will require services and they cost more money. We need commercial development instead of adding luxury homes.”

O’Hara said adding property to the tax rolls adds revenue to the village treasury. She said the real estate industry is slipping in Lake Bluff and Lake Forest while it is growing in surrounding communities.

“Real estate is big business on the North Shore,” said O’Hara. “Adding luxury homes will help the tax base.”

When asked what the village should do about providing affordable housing for senior citizens to make it easier for them to transition out of their existing homes into more suitable accommodations in town, O’Hara did not discount the idea.

“We have to offer more diversity to make it affordable for seniors and young families,” said O’Hara. “We have to look ahead and see what we want to promote.”

Lesser was emphatic saying the value of housing was a matter for the market to decide. He said most of the housing that has been added in recent years was at the higher end.

“It’s not the village’s job,” said Lesser. “It’s the right of private industry. The village is not in the business of providing senior housing or other kinds of housing.”

The wish for a vibrant central business district was a theme of several of the questions. One question asked what the contenders thought about the growth of downtown Lake Bluff over the last few years.

Lesser said the addition of businesses like Lake Bluff Brewing Company and Bluffinia concerts bringing live music to the Village Green in the summer months have made downtown better. O’Hara agreed and said volunteers in the community have made a big difference.

“The Garden Club who plant the flowers and all the people who volunteer for the bike race make Lake Bluff special,” said O’Hara. “It’s people like those who work on the Fourth of July parade working together.”

Wanting to know about the candidates’ vision for Lake Bluff’s future, questioners asked Lesser and O’Hara to imagine what Lake Bluff will look like to a person leaving town now and returning in 2020. Both said they saw a more vibrant downtown.