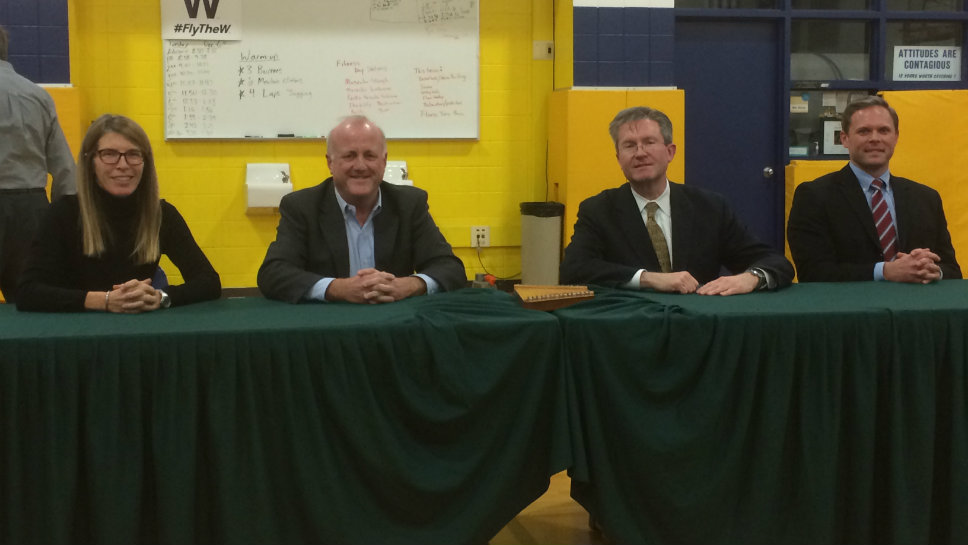 LAKE BLUFF — Two incumbent members of the Village Board of Trustees and the sitting village clerk earned the backing of the V.O.T.E. Lake Bluff caucus for three open board seats in the April 4 election.

With members of the voting public able to mark a ballot for up to three choices, Meyer got 173, Grenier 162, Towle 147 and Kate Briand, an attorney running for office the first time, 140.

Any registered Lake Bluff voter was eligible to attend the meeting and cast a ballot for village president, members of the Village Board, the Library Board of Trustees and village clerk.

It is difficult to determine how many participants marked ballots to select trustee candidates since people could mark picks for one, two or three candidates. There were 230 marked for president with incumbent Kathy O’Hara earning 156 and former Trustee Rick Lesser gathering 74.

Briand said in a DailyNorthShore.com interview after the balloting that she plans to run in the April 4 election despite the outcome of the caucus endorsement process.

Towle, Meyer, Grenier, Briand and any other candidates for trustee or the others office who want to run can do so. They must file their nominating petitions between December 12 and 5 p.m. December 19 at Lake Bluff Village Hall, according to Village Administrator Drew Irvin.

During her opening statement, Briand said she was drawn to running during the year-long hearings by the board and the Plan Commission Zoning Board of Appeals on the development of Blocks 2 and 3 in downtown Lake Bluff, which ended in September.

“The hearings made me realize the need for a voice that will tell (officials) what the people want to hear about,” said Briand.

Meyer, who is seeking his second term, also talked about his role in the Block 3 discussions. He said he listened to the objections of nearby residents and crafted the changes that ultimately caused the developer to drop its plans.

“I listened to the concerns of the people and led the drive to a consensus to block the third story,” said Meyer. “I will always be about listening to you.”

Also seeking a second term, Grenier talked about the impact of downtown development on the community and his desire to make sure it was appropriate.

“I want to see development but at the same time it must be meeting our character,” said Grenier in his opening statement. “The rules have to be clear so the builder knows what to expect,” he added when answering a question about residential development in Lake Bluff.

When responding to questions, Towle stressed the need for adding additional revenue to the village’s treasury through tax dollars generated by business growth.

“It needs to be driven by property tax and sales tax,” said Towle. “We want to drive increased sales tax by filling vacancies. We may be able to do this with public private partnerships.”