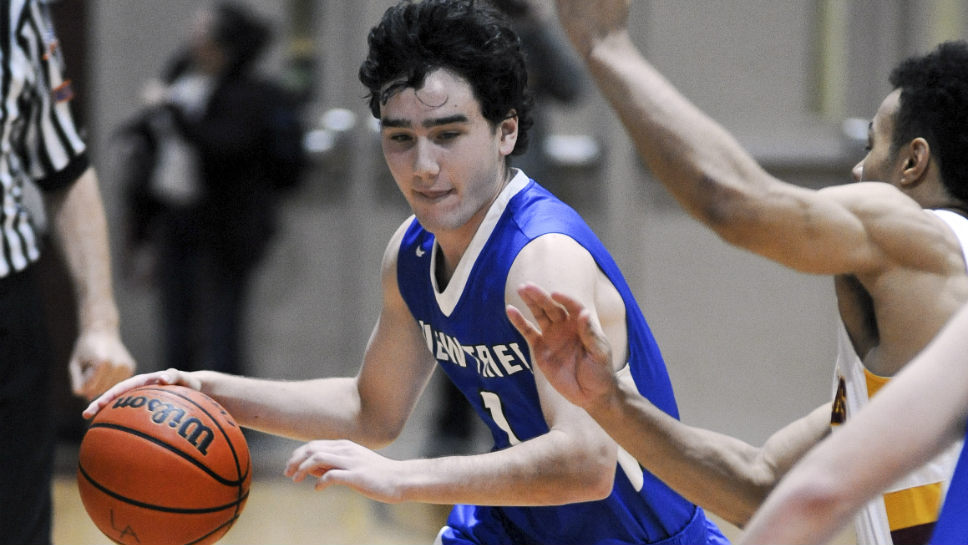 Andrew Kirkpatrick was exceedingly polite in a post-game interview.

But polite is not how you describe his play on a basketball court.

When he’s between the lines, the fiery New Trier High School junior point guard plays with an edge.

Which can, if he’s not careful, become a double-edged sword.

That scenario played out in the third round of the New Trier/Loyola Academy Thanksgiving Tournament on Nov. 23.

Seconds after making a silky smooth 15-foot jump shot from the right corner midway through the third quarter, Kirkpatrick got slapped with an inexplicable technical foul.

Inexplicable, at least, to Kirkpatrick.

He found the ‘T’ confounding.

“No words were exchanged, I swear,” said the 6-foot-2 Kirkpatrick, following his team’s 56-54 overtime win over host Loyola. “I got it for staring down [a Loyola player]. I was kind of surprised that they called it.”

Technical fouls aren’t SOP — standard operating procedure — with Kirkpatrick, especially when he plays in front of an SRO — standing room only — crowd.

“It was my first technical foul ever,” he said. “And I’m never going to get another one.”

Playing the game with passion didn’t prove to be a disqualifier. Based on his high skill level, Kirkpatrick was named to the all-tournament team along with sophomore teammates Ciaran Brayboy and Spencer Boehm.

“I just like being physical out there,” said Kirkpatrick, who played his club ball with Hoops Avenue last offseason. “And I don’t like to lose. So I’ll do whatever I can to win a game.”

New Trier head coach Scott Fricke is just fine with Kirkpatrick’s intense nature. ‘Cause he knows the kid can play.

“What I like about Andrew is that he brings stuff,” said Fricke. “He is so talented.

“He’s quick. He can shoot. And he’s real competitive,” the coach added. “He’s a basketball player.”

Kirkpatrick was moved up to the varsity as a sophomore but played only sparingly.

“The difference between last year and this year is that he’s more engaged, more focused,” said Fricke.

Kirkpatrick, who also plays golf for New Trier, certainly isn’t afraid to fail. At the end of regulation — and with the score knotted up 49-49 — he held the ball out on top for close to 30 seconds before driving the lane and putting up a just-off-the-mark 14-footer, sending the game to overtime.

“The plan was for him to go by his man and make a pass. [Aaron] Peltz was wide open,” said Fricke. “As a coaching staff, that’s what we preach: make the extra pass. But Andrew saw the rim and put it up.”

“I took a shot that I like to take. But, looking back, I should’ve passed it to Aaron,” Kirkpatrick confessed. “Aaron’s a great shooter. He would’ve made it.”

In the end, it all worked for the New Trier. The Trevians put the game into the win column by making seven free throws in the extra session. The biggest tosses belonged to Teddy McGregor. The senior popped in two with 42 seconds left to put the Trevians ahead 56-51.

Kirkpatrick (11 points) and Spencer Boehm (8 points) also made two free throws each in the OT period.

NT’s unsung hero was James Connors. The senior came off the bench and nailed three three-pointers.

The stage wasn’t too big for the 6-foot-5 senior. Two of Connor’s threes came in the second quarter in the right corner — with the LA fan section (mostly football players) hovering over and around him.

“It was loud. It was chaotic,” said Connors.

After his second make, Connors turned to the crowd — just a little — before heading down court.

“I wasn’t going to start anything with them,” he added.

Connors’ third three-pointer came with 3:31 left in the fourth quarter and gave the Trevians a one-point advantage, 47-46.

That one especially felt good to Connors. A few minutes earlier, Connors had fired up an air ball.

“They were getting on me pretty good after the air ball,” said Connors.

In their game against New Trier, the Ramblers were in a position to win. But in the closing seconds of the overtime period, star senior guard Ramar Evans missed a three-point attempt from the left corner.

“I probably should’ve called a timeout — just to settle us down,” said Loyola coach Tom Livatino. “But Ramar got a good look, He likes to take the last shot. And he’s made plenty of them for us.”

Evans, who will play his college basketball at Division II Maryville University in St. Louis, finished as the game’s leading scorer (20 points). With 30 seconds left in overtime, the three-year starter hit a step-back three-pointer to cut NT’s lead to 56-54.

Evans had four threes in the game, including an NBA-range missile at the end of the third quarter. He also had six rebounds and five assists.

The Ramblers wound up with runner-up honors in the tournament. They fell to Benet Academy 55-44 in the title game on Nov. 26. Evans finished the game with 10 points and five rebounds. Cunningham and DeGuzman had seven points each.

Evans and Cunningham were named to the all-tournament team.