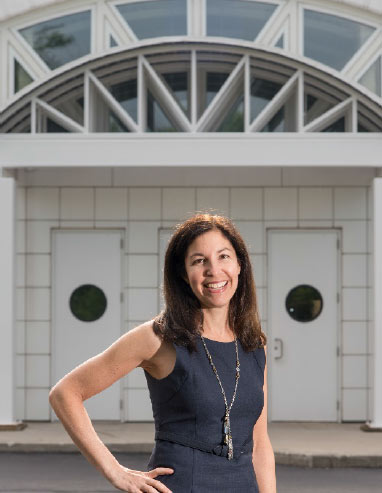 Susan Abrams, CEO of Illinois Holocaust Museum & Education Center, was recognized for both her executive leadership and innovation by the Stevie Awards for Women in Business. Abrams received a gold medal as Innovator of the Year and a silver medal as Executive of the Year, both in the category of Government or Non-Profit Organizations with up to 2,500 employees. The awards were announced during a gala event at the Marriott Marquis Hotel in New York City on Friday, November 18.

As CEO of the Museum since 2014, Abrams leads the world’s third largest Holocaust museum as it employs cutting-edge technology to teach the lessons of the past and inspire positive change in the world. This includes a partnership with the USC Shoah Foundation to create holographic video recordings of Holocaust Survivors with voice recognition capability that enables the recordings to respond to visitors’ questions in a powerfully lifelike way.

To fuel this innovative approach, Abrams has galvanized philanthropic support for a $30M campaign that will secure the financial and programmatic future for the Museum’s next phase of growth, including opening the Museum’s groundbreaking Take A Stand Center in the fourth quarter of 2017.

“Susan has brought extraordinary leadership to the Illinois Holocaust Museum,” noted J.B. Pritzker, Immediate Past Chair of the Museum’s Board of Trustees.

“Susan has taken our solid foundation and introduced new programs and vision that will serve our community for generations to come,” commented Museum Board Chair John Rowe, retired Exelon Chairman and CEO.

The Stevie Awards for Women in Business honor women executives and entrepreneurs and the companies they run worldwide. The Stevie Awards have been hailed as the world’s premier business awards.

“It is an honor and fitting that the Stevie Awards has recognized Susan as one of the nation’s leading executives and innovators,” said David Golder, Museum Board Chair.

Susan Abrams
Susan Abrams was appointed CEO of Illinois Holocaust Museum & Education Center in April 2014, with more than 20 years of nonprofit, museum, business building, and financial management experience. She previously served as the COO for JCC Chicago where she oversaw the $34 million organization’s businesses, executed at over 30 Chicagoland locations. She also held leadership positions at Northwestern University and Chicago Children’s Museum, in addition to working as a consultant at McKinsey & Company and an analyst at Goldman Sachs.

Ms. Abrams holds an MBA degree from Northwestern University’s Kellogg Graduate School of Management, a BSE from the Wharton School and a BA from the College of Arts & Sciences at the University of Pennsylvania. She is the author of The New Success Rules for Women: 10 Surefire Strategies for Reaching Your Career Goals (Random House, 2000).

Illinois Holocaust Museum & Education Center
Illinois Holocaust Museum & Education Center uses the history and lessons of the Holocaust to teach current, relevant, and universal lessons in humanity. Through world-class exhibitions and programs, the Museum inspires individuals and organizations and provides a universal wake-up call to action: Take history to heart. Take a stand for humanity. The Museum is open daily from 10:00 a.m. until 5:00 p.m.; and Thursday evenings until 8:00 p.m. Learn more at www.illinoisholocaustmuseum.org.