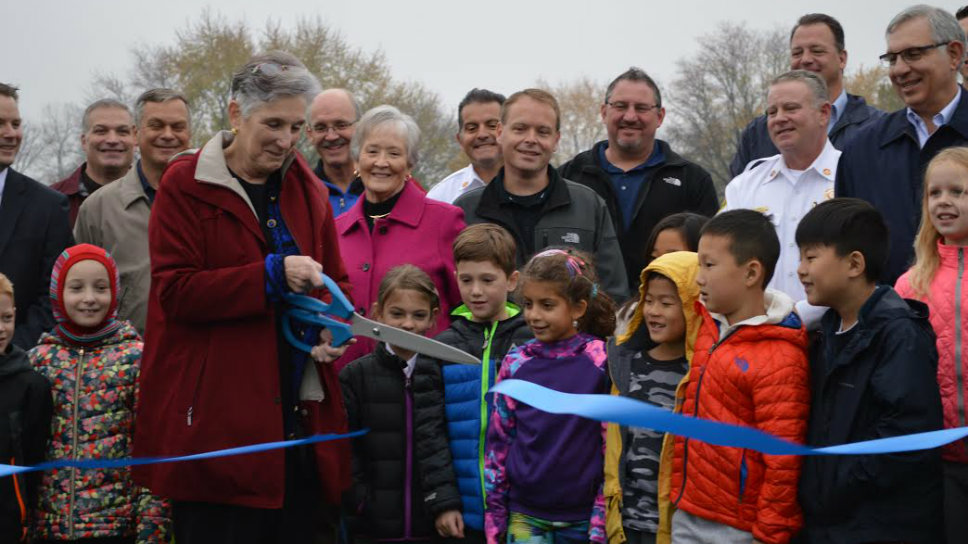 Northbrook Village President Sandy Frum cuts the ribbon on the renovated Wescott Park while children and others watch. Photo courtesy of Village of Northbrook.

NORTHBROOK — Rather than buy five or six homes and demolish them to keep the rest of the neighborhood around Wescott park from flooding, a governmental partnership created an underground 7.5 million gallon water tank instead.

After more than three years of planning and building, the Village of Northbrook and the Northbrook Park District reopened the restored Wescott Park November 15 at Western Avenue and Farnsworth Lane significantly reducing the chances of flooding in the immediate area.

The park has been restored with its two softball fields, which double as flag football facilities in the fall, according to Ed Dalton, the park district’s director of parks and properties, along with 70 new trees and 50 shrubs.

The bulk of the $9.65 million project was done underground, according to Matt Farmer, the village’s engineer. He said the area around Western and Farnsworth and four blocks to the west was prone to flooding for years.

As the village looked at ways to alleviate the flooding, Farmer said, they needed to dig a deep enough tank to take in heavy rainwater and bleed it out slowly to the West Fork of the North Branch of the Chicago River to assure homes and streets did not overflow.

“We could have bought five or six homes, torn them down and built it there,” said Farmer. “Then we thought of Wescott Park but that’s park district property.”

The facility was home to two softball fields and the outfield grass was used for flag football in the autumn, according to Dalton. At first he balked but then he heard an idea he liked.

“They said it could be built underground and we said that totally works,” said Dalton.

Water enters the tank through a large pipe and leaves through a much narrower one letting it seep out slowly to the river without flooding in the neighborhood.

Before the project, the park district was able to let nature take care of irrigating the fields but when only 18 inches of soil remained between the top of the holding tank and the surface more was necessary. Enter Metropolitan Water Reclamation District of Greater Chicago.

The MWRD provided a $475 grant so Northbrook could retain enough of the rainwater to irrigate the fields, according to Farmer.

“The storm water goes through a filter so nothing (contaminated) gets on a baseball field but it’s not potable drinking water from Lake Michigan,” said Farmer. “The only cost to the park district is electricity.”

“We are being good environmental stewards,” added Dalton.

The tank ranges in height between ten feet and 11-4, according to Farmer and can hold up to 7.5 million gallons of water.

“As I tell the grade school children that’s 100,000 bath tubs,” said Village President Sandy Frum at the November 15 meeting of the Village Board of Trustees.

Though final costs are not fully paid yet, Farmer said he expects the total expenditures to be under budget by between $100,000 and $150,000.