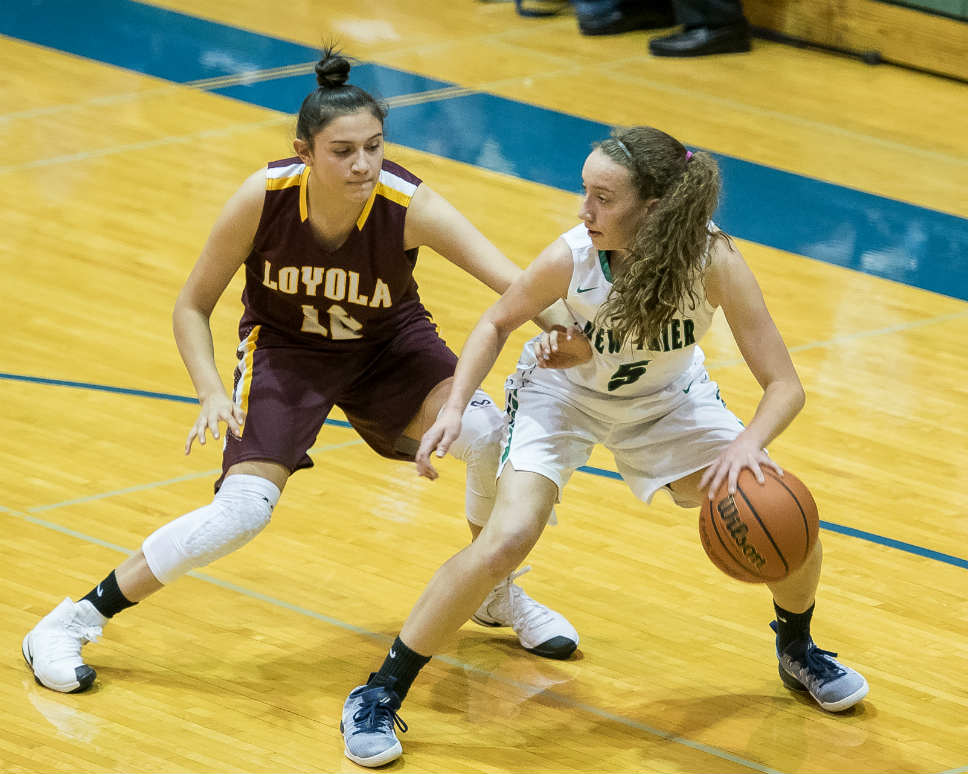 Julia Martinez puts her hair in a bun instead of a ponytail.

That right there sets her apart from most players on a basketball court.

But what really distinguishes Martinez from the rest is her all-around stellar play.

The sophomore point guard, a returning starter for the Loyola Academy girls basketball team, is an emerging star.

Martinez arguably was the MVP in LA’s 47-38 victory over host New Trier in the fourth round of the NT Thanksgiving Tournament on Nov. 25. Playing the entire 32 minutes, she finished the game with 14 points, five rebounds, five assists and four steals.

The 5-foot-10 Martinez is blessed with an unusually quick first step. In fact, one of the main features of her game is her drive down the lane. It doesn’t matter if she goes left or right. She can finish.

Against the Trevians, she scored four times on isolation plays — one per quarter.

“I can drive,” said Martinez. “What I have to work on is my outside shooting. That’s one of my weaknesses. But I’ve been working on it.”

Her other signature play — at least, against New Trier — was turning a steal near midcourt into a fast break layup. She did it twice: once in the second quarter and once in the fourth quarter.

Such as a play is equivalent to the Pick Six — scoring a touchdown off an interception — in football.

“Yeah, I get that [analogy],” said Martinez, smiling.

“Scoring off a steal is just the best,” she added.

You have to be lightning quick to pull it off. And Martinez, who plays her club basketball with Illinois Lady Lightning, has that game-speed thing going for her.

Her defense has been outstanding. She had eight steals in LA’s 47-31 victory over Phillips in round two of the NT Tourney on Nov. 17.

Martinez’s other unique skill is her rebounding. It’s a rare find with most point guards. She had 13 boards against Phillips, while she came up with 11 caroms in LA’s 56-43 victory over Harlan in the tourney opener on Nov. 15.

And to her credit, Martinez plays the point-guard position the way a point guard should play it. She’s got a pass-first mentality. She scored a team-high 62 points in five tourney games, while putting up just over eight shots per game (20-for-41).

Dishin’ the ball is what she does. And it helps to have a couple of post players who can finish underneath in 6-0 senior Clare Nelson and 6-2 Lily Wehman.

“We’ve got some good players inside,” said Martinez. “I’m always looking to get the ball to one of them.”

The Ramblers (4-1) may have found some “Lightning” in a bottle with Nelson. She had a breakout game against New Trier, ending up with a game-high 17 points to go along with four rebounds.

“Clare struggled in the first few games. She will tell you that,” said LA head coach Jeremy Schoenecker. “We knew that she had it in her. It was nice to see her step up in game four of the season.

“I thought she did a great job of finishing around the basket,” the coach added.

Nelson just might be the X-factor on this Ramblers’ squad. Her junior year was interrupted, when she sustained a concussion in early January. She wound up missing the second half of the season.

“I was nervous about coming back,” Nelson said, “especially with how horrible last winter was for me.

“I was nervous that I might play timidly [this season],” she added. “But I’m not.”

Three of her inside baskets were set up by Martinez.

“I don’t know where we would be without Julia,” said Nelson. “She’s such a good player. She’s always looking inside and her passes are amazing.”

Wehman, who was moved to the varsity as a freshman, played even less than Nelson last year. The junior sustained an ACL in the fall and had to sit out the entire 2015-16 season.

Wehman, who had six points and two blocks against New Trier, opened the campaign with a strong effort against Harlan: eight points, eight blocks and 11 rebounds.

The other LA player to watch is Madison Kane. The veteran senior guard, a three-year varsity player, didn’t miss a shot and finished with a team-best 15 points in a 52-25 win over Marian Catholic in the tourney finale on Nov. 19.

The Trevians finished 3-2 in the own Thanksgiving Tournament. They concluded the five-game set by defeating Harlan 55-41 on Nov. 19.

“It’s early,” said NT head coach Teri Rodgers, following the loss to LA. “We’re using these tournament games to see what we’ve got and to find out who we are. We’ve got some kids playing varsity basketball for the first time. So, it’s exciting for them. Sometimes, I liked what we were able to do. Sometimes, we struggled. There’s a learning curve.”

Notable: Loyola ran the four-corners offense to perfection at the end of its game against New Trier. The Ramblers went to the “stall” with a little over three minutes left to play and took close to two minutes off the clock. “That was huge for us,” said LA head coach Jeremy Schoenecker. “We killed off some time. We were strong with the ball. You can win a lot of games, when you execute like that.” … Senior Katherine Gjertsen, one of the most experienced players for New Trier, had to leave the game with an ankle injury with 6:39 left in the third quarter. She never returned to the court. “The game changed a little right then,” said NT head coach Teri Rodgers. “But, next player in. We’ve got 10 to 11 players who can play.”

“It’s early. We’re using these tournament games to see what we’ve got and to find out who we are. We’ve got some kids playing varsity basketball for the first time. So, it’s exciting for them. Sometimes, I liked what we were able to do. Sometimes, we struggled. There’s a learning curve.” — NT head coach Teri Rodgers. 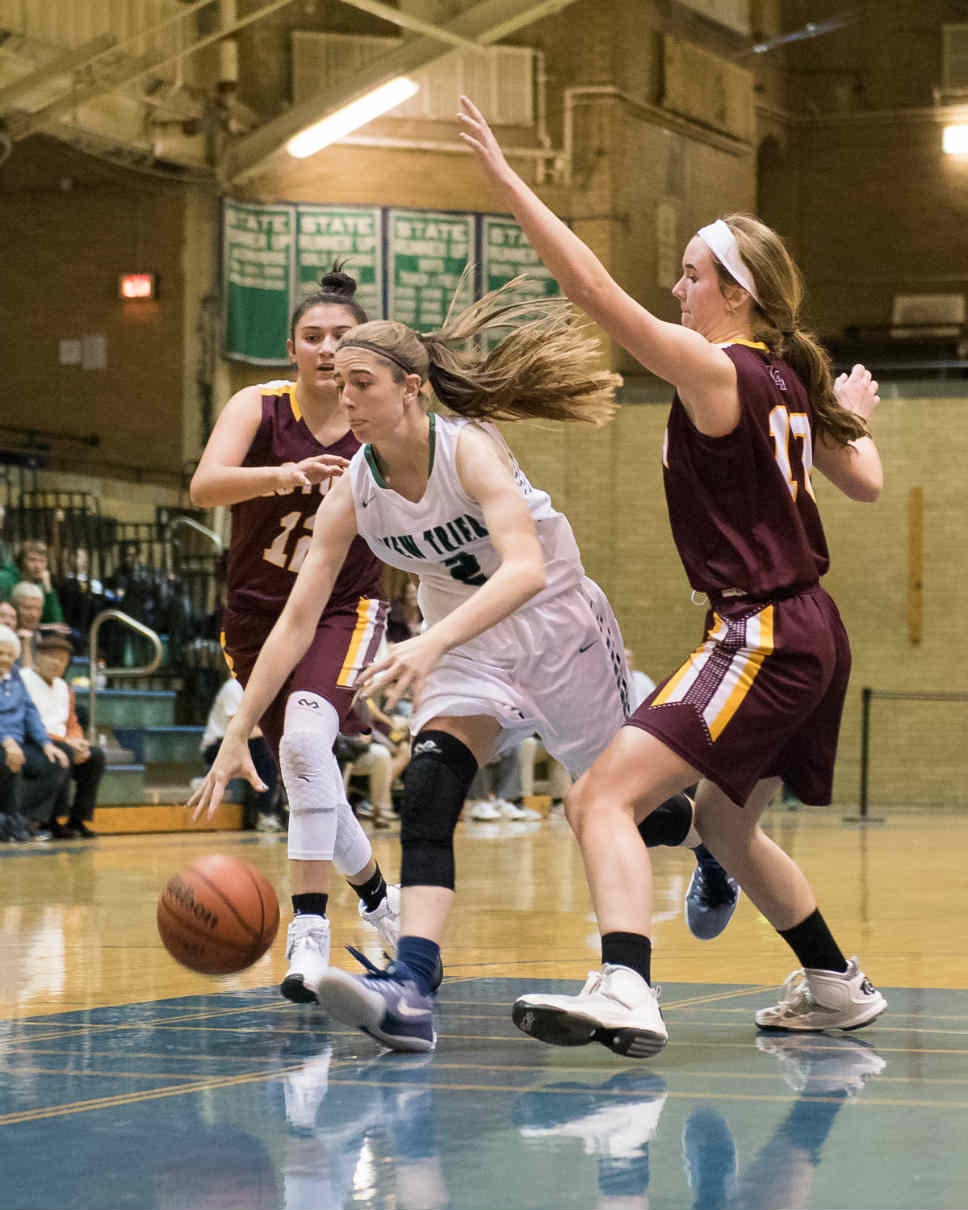 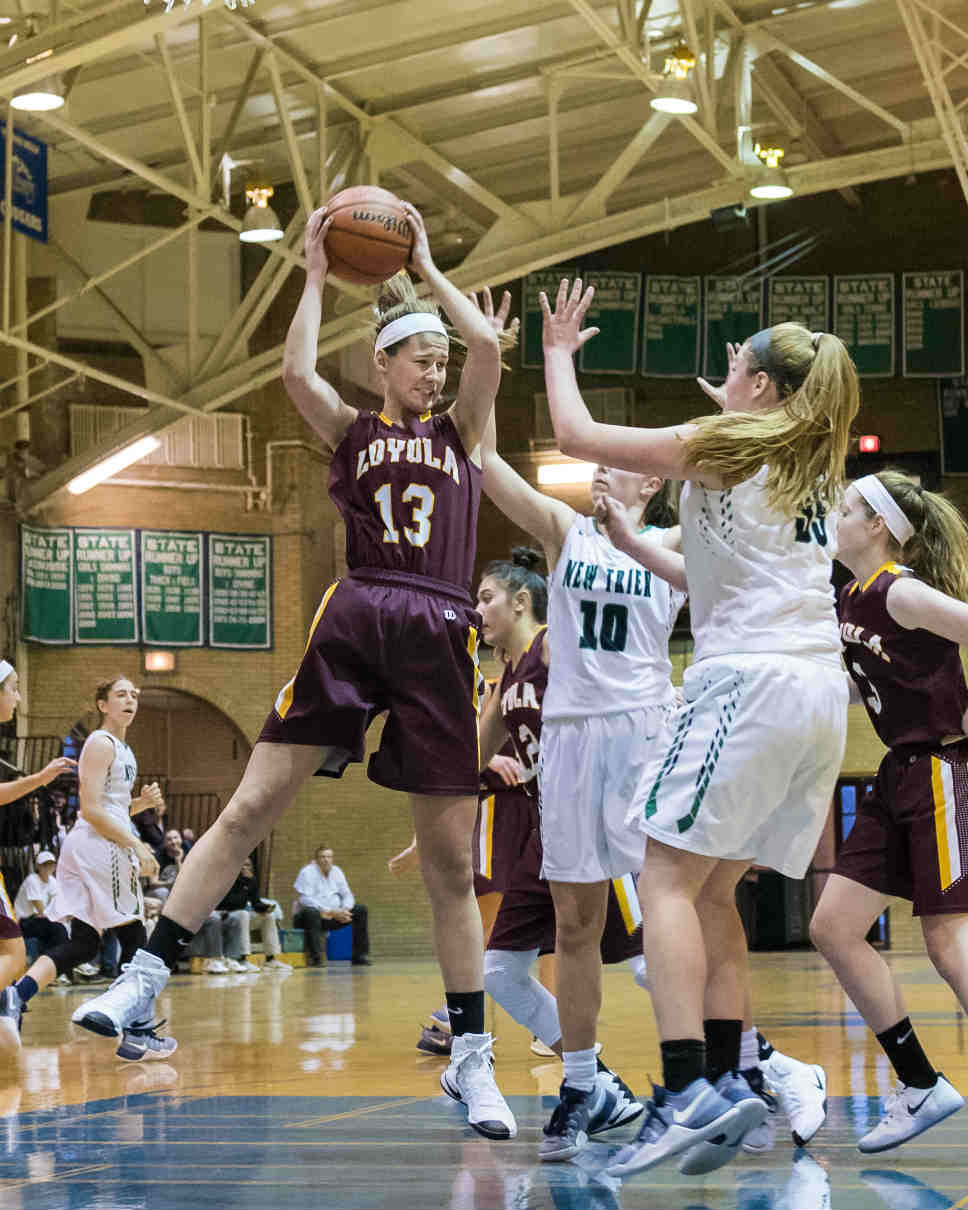 Lily Wehman of the Ramblers snags a rebound. PHOTOGRAPHY BY LYNN TRAUTMANN 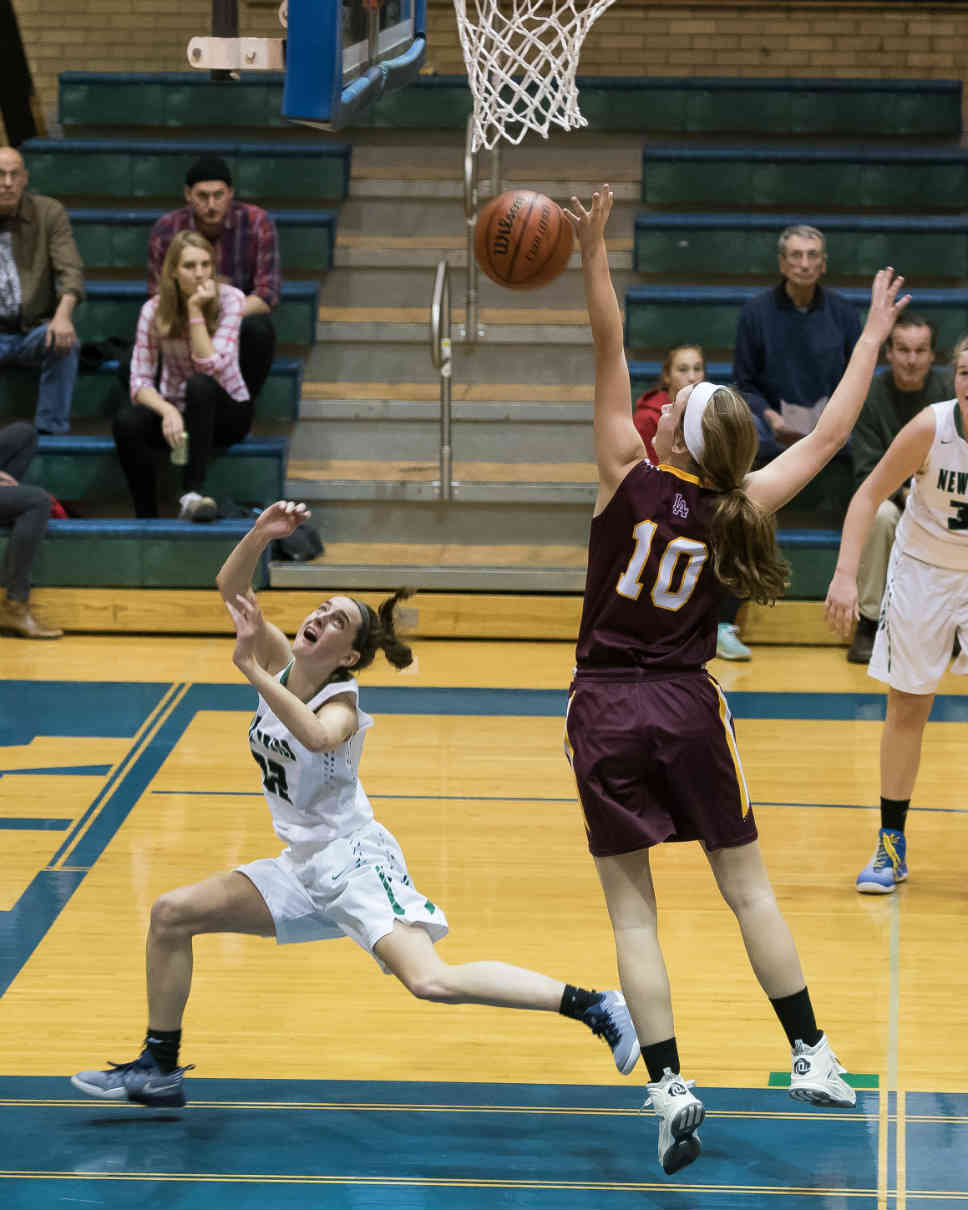 New Trier’s falls to the ground after putting up a shot and drawing a folul. PHOTOGRAPHY BY LYNN TRAUTMANN 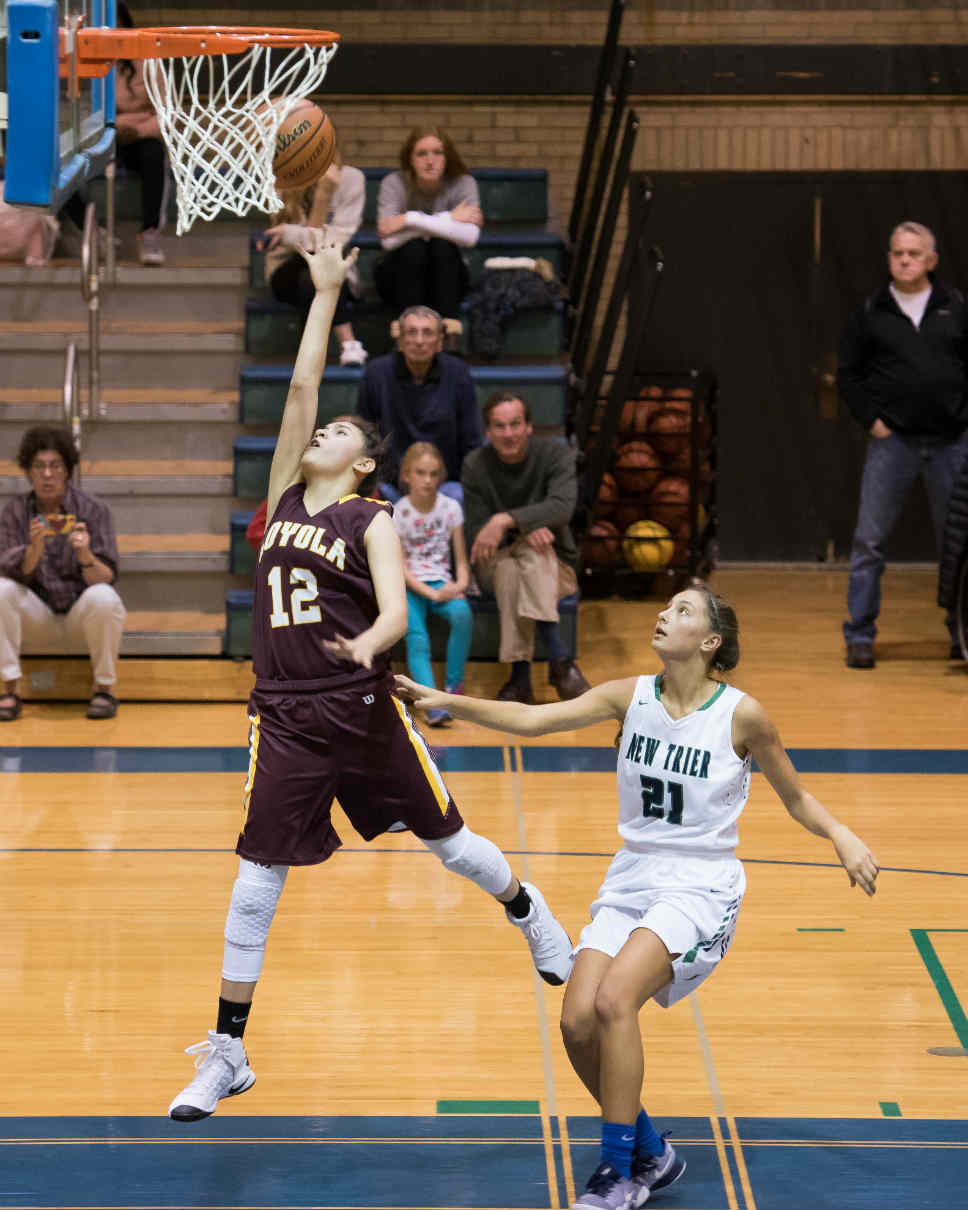 Julia Martinez of the Ramblers scores on a fast-break layup. PHOTOGRAPHY BY LYNN TRAUTMANN