Before each of her dives at the state meet last weekend, New Trier sophomore Jessie Creed, listening to music only she could hear, danced vigorously on deck, her arms and legs flailing, her head bobbing, her lips silently mouthing lyrics. 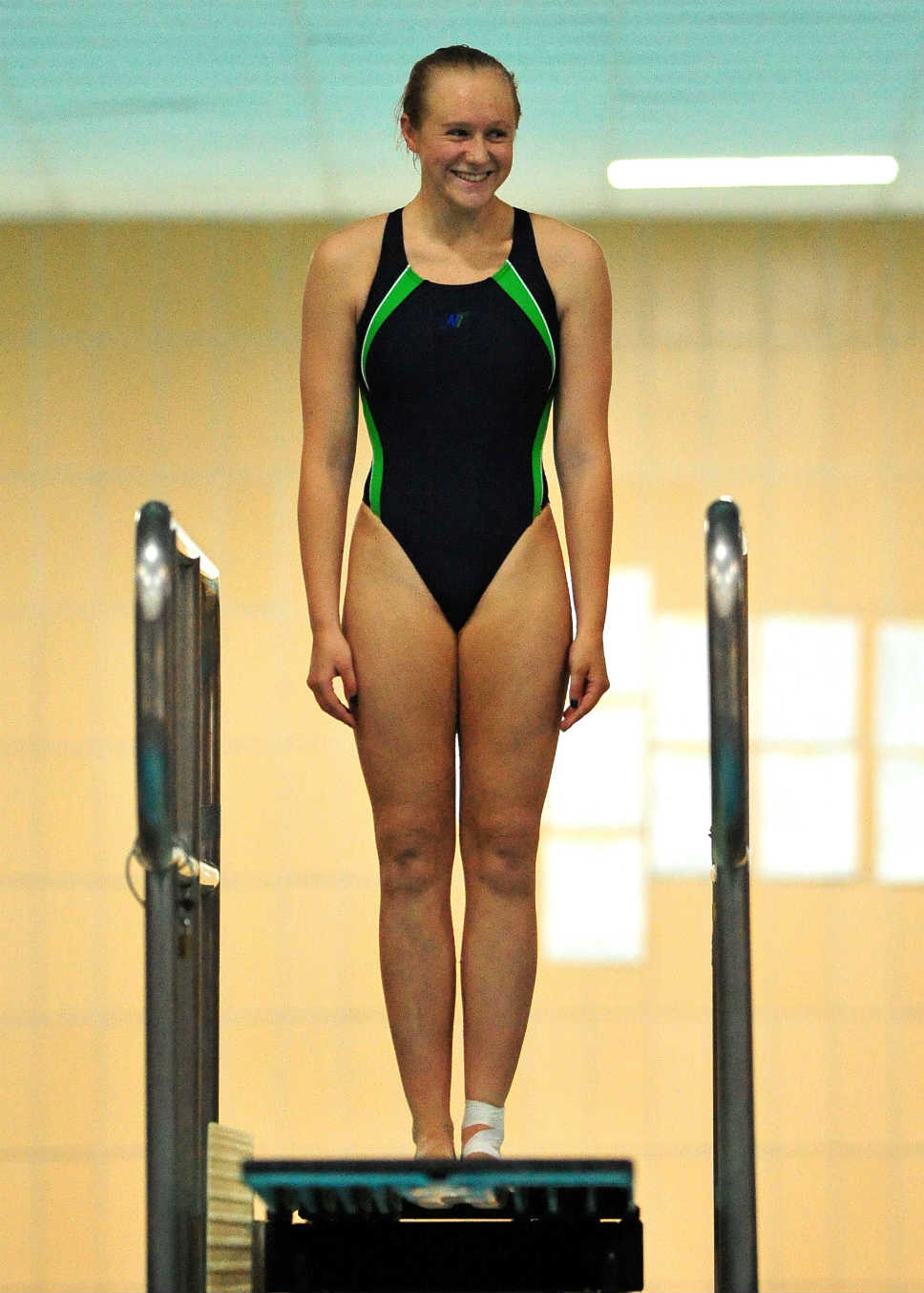 Jessie Creed of the Trevians acknowledges her fans prior to dive No. 11 at the state meet. She took the first-place medal with 462.55 points. PHOTOGRAPHY BY STEVE HANDWERKER

“It helps me keep my energy up,” Creed said. “Dancing at meets, it keeps me distracted … distracted but focused.”

Her diving coach, Bruce Kimball, a smart man, stays away from his star diver during the solo dance sessions.

“When possible, when she’s not moving so much,” he said, “I give her a couple of my thoughts.”

Creed, headphone-less, climbed the middle board at Evanston Township High School and stood still on Nov. 20. Silence before her final dive in the finals, but not for long. Her teammates, sitting to her left in a bank of poolside bleachers, shouted, “Hey, Jessie!”

Creed turned her head to her left, smiled and nodded to acknowledge her supporters.

Then she lost the smile and went to work, executing another picturesque dive. It clinched a state championship, the first by a Trevians female diver since Paige Grant topped the field at the 2008 meet.

Creed, third at state as a freshman last fall, finished with a total of 462.55 points, bettering runner-up Lucy Hogan of Evanston by more than 13 points.

“She rips every dive,” said New Trier freshman Katie Lipsey, 12th (392 points) at state last weekend and, like Creed, a Chicago Dive Club member. “Jessie teaches me everything I need to know about diving. She told me what to expect at this meet. She’s nice, a leader. I learned, no matter what, you have to keep persevering at a meet like this.

“The big crowd here, the loud crowd, I liked it.”

Diving judges loved Creed’s 10th dive (her second dive on Nov. 20, Day Two of the meet). The inward double boasted a degree of difficulty of 2.8. Creed made it look easy, earning 7s and 6.5s.

“That was the key dive,” Kimball said. “She did well, scored well. Exciting.”

Creed gained strength in the offseason and joined her swimming mates for weightlifting sessions during the season. Squats built up her lower body, medicine ball tosses her arms. Talent? No shortage of that.

“I worked as hard as I could [since the end of her freshman season], trying to get sharper in the air, trying to get everything perfect,” Creed says. “I listened to my coaches, and I had faith in God.”

One of the first to hug the champ was Kimball, who also presented the medals to each of the 12 diving finalists.

“Such an awesome guy,” Creed said. “Bruce is a huge role model, always there, always kind.”

For the first time, officials recognized a combined (disabled and able-bodied athletes) state team champion in girls swimming and diving — and New Trier was that team.

“So cool” Trevians coach Mac Guy said. “To be a part of something historic like that … so cool. Our goal, all along, was to be a trophy team.

“We competed really well today. We had such a great group this season, and I’m so proud of our seniors.”

Notable: Trevians junior Sophia Girgenti finished in 13th place in the 100 free (52.45) on Nov. 19, one place shy of a spot in the event’s consolation finals. 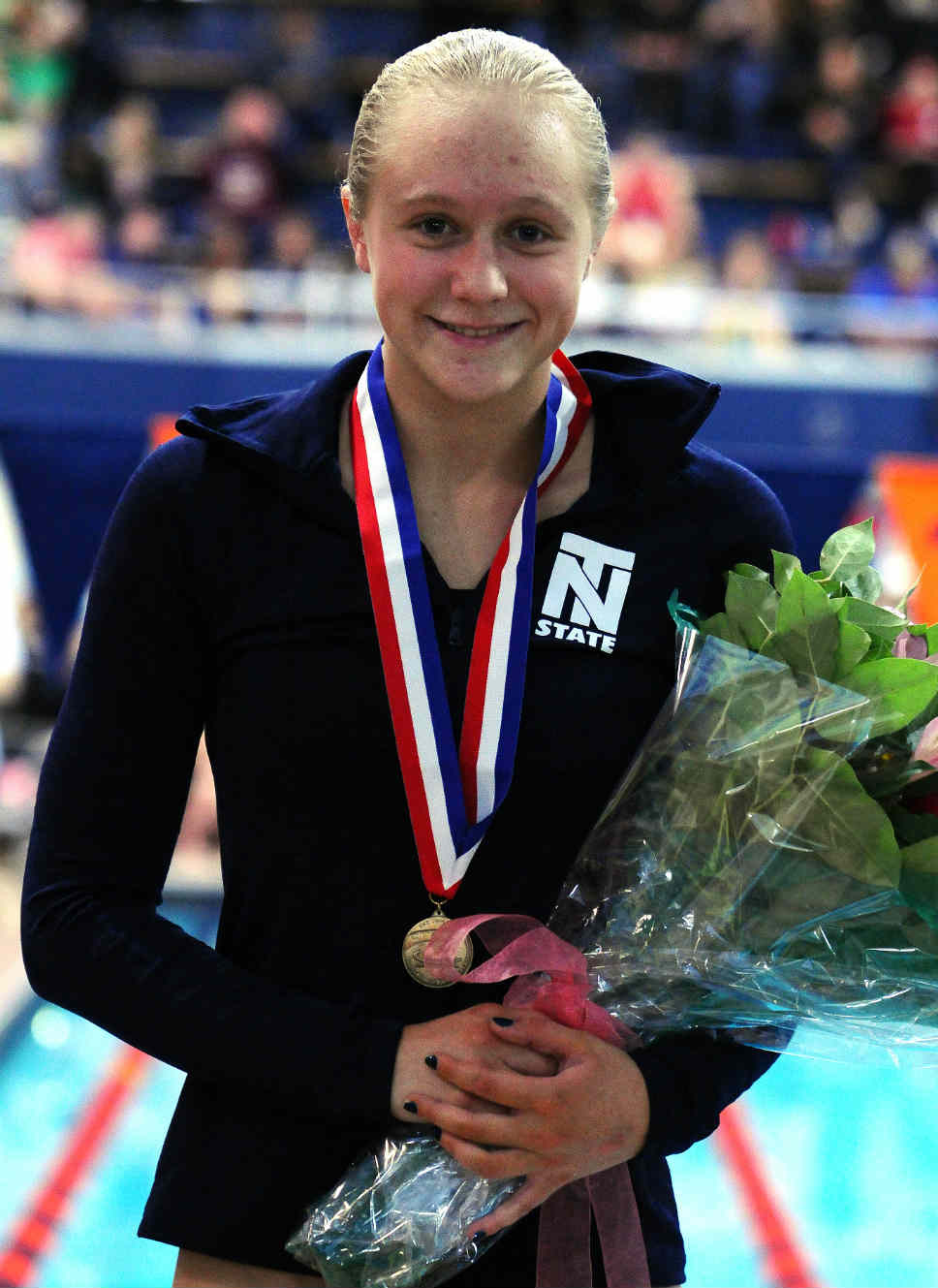 Jessie Creed poses on the podium after winning the state diving title. PHOTOGRAPHY BY STEVE HANDWERKER 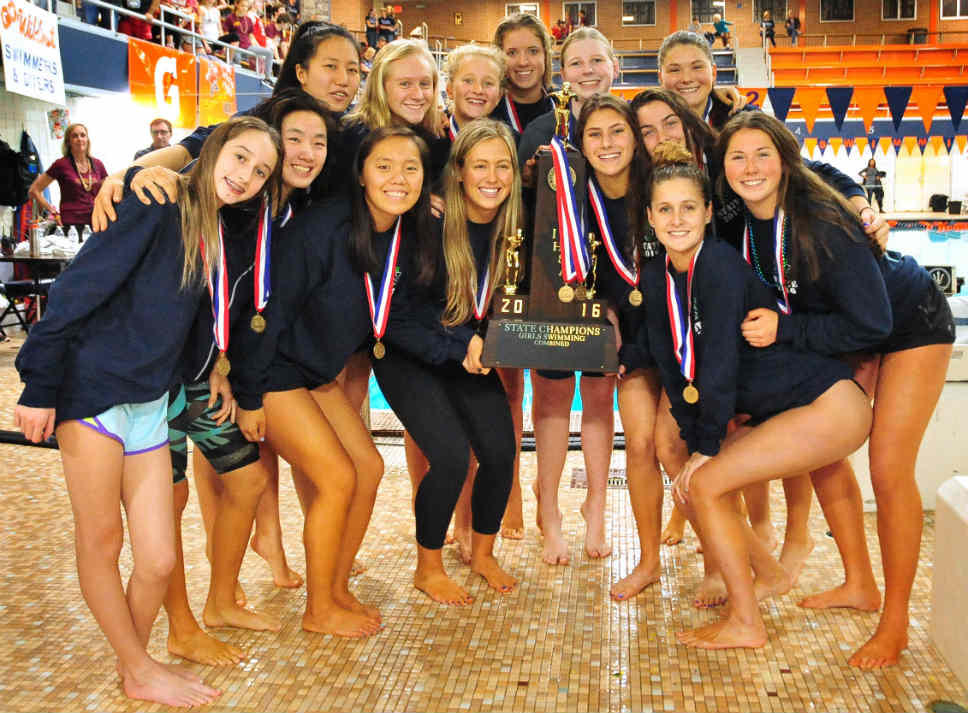