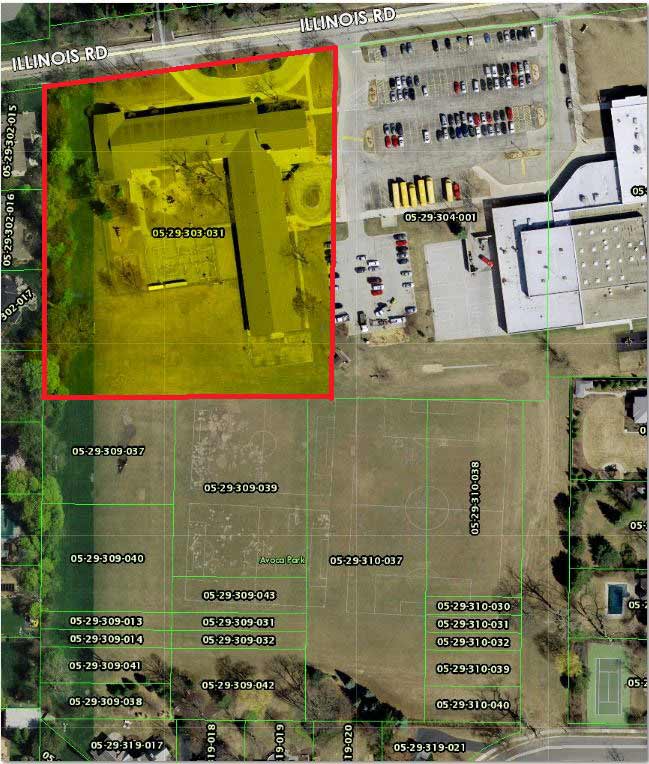 Avoca Center parcel is highlighted; photo from the D-37 website.

WILMETTE – A final decision regarding the future of the Avoca Center at 3013 Illinois Road has been postponed as School District 37 school officials continue to research all potential options for the building.

At a meeting on October 26 Superintendent Kevin Jauch told residents the district could make a decision about whether to sell or renovate the building as soon as November 17. But after reviewing input received from residents at a Committee of the Whole meeting held on November 3, the school board decided to explore its options further.

In particular, Jauch said the board will look into how much the building could be rented if the district chooses to renovate the building and how long would it take to pay off the renovation costs. “The key part is that we want to do our due diligence,” Jauch told DailyNorthShore.com.

At the October 26 meeting, Jauch emphasized that renovation costs would be high. Renovation of the building is estimated at a cost of $6.7 million and could take over two years to complete. That money would most likely be raised through the sale of bonds and does not include interest payments.

Jauch said that while some residents shared a preference to hold onto the property, most residents expressed a view that the building should be sold if it is not being used as an educational facility by the district, and the renovation costs are significant.

The Avoca Center, situated on more than four acres of land adjacent to Marie Murphy Middle School, was originally built as a school called Avoca East Elementary School. But the baby bust of the late 1960’s and early 1970’s ultimately led to the closure of the school in 1977, and the building was renamed the Avoca Center.

The building has been used in various capacities for decades. Since 1995, The Arlyn School, a therapeutic day school, and One Hope United, a daycare and preschool, have been tenants of the building.

The Avoca Center is in disrepair, with aging boilers, tanks and pipes dating from the building’s construction in 1957. Jauch said if the district decided to renovate the building, the current renters would be considered first in line to lease the space.