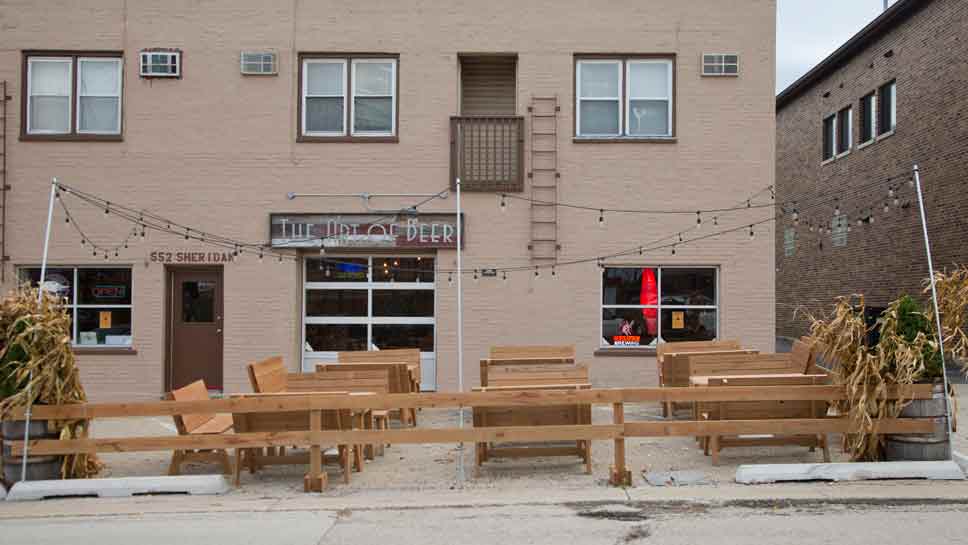 The outdoor beer garden at Art of Beer in Highwood.
Photography by Joel Lerner/JWC Media

HIGHLAND PARK – When customers ask The Art of Beer to recommend the best beer on draft, the general manager often gives the same standard reply:

“It’s very much a mood thing, so when people try to nail me down I always tell them these are my 24 children and I love them all the same,” said Roy Hernandez. “It’s tricky for us, because some people have the notion that there’s one really good beer on draft that’s better than all of the beers.”

The taproom at 552 Sheridan Road, Highwood, is known for small five-ounce pours called flights. “Historically the word flight came from a flock of birds,” said Hernandez. “A flight is a collection of three different beers that are sold for a dollar off. When your list is constantly influx as our list is, people come in with a battle plan and want to try between four and eight different beers in one session. If we only offered them in larger 10, 12 and 16 ounce pours that would be irresponsible.”

This is especially true because some of the beers have high alcohol content. For example, the Avery 16 Pumpkyn beer is 18.8 percent alcohol while the Avery Rumpkin (rum barrel aged pumpkin) is 17.5 percent, and the Headless Heron, reminiscent of “grandma’s pumpkin pie” is about nine percent. These are considerably higher than “mainstream beers” that are about four to four and a half percent, he added. 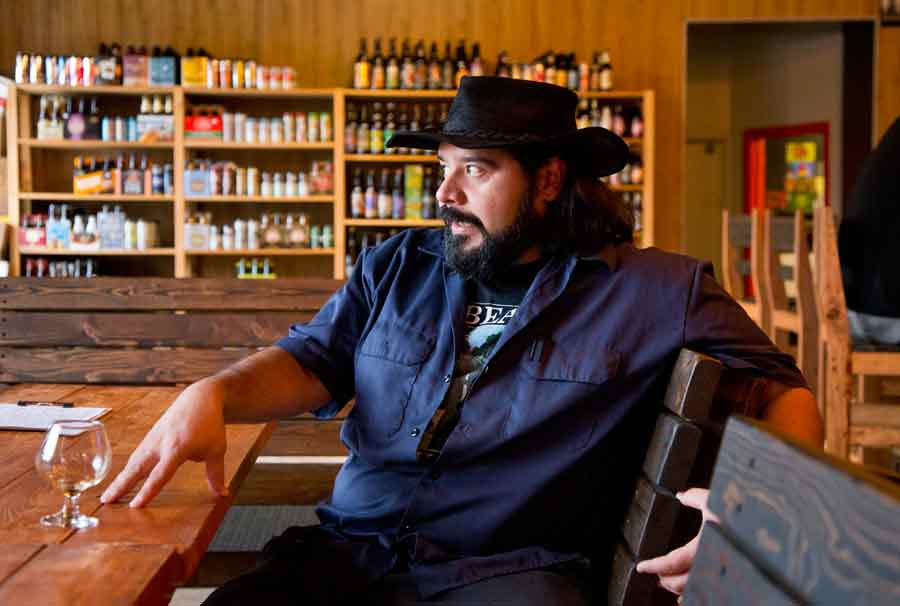 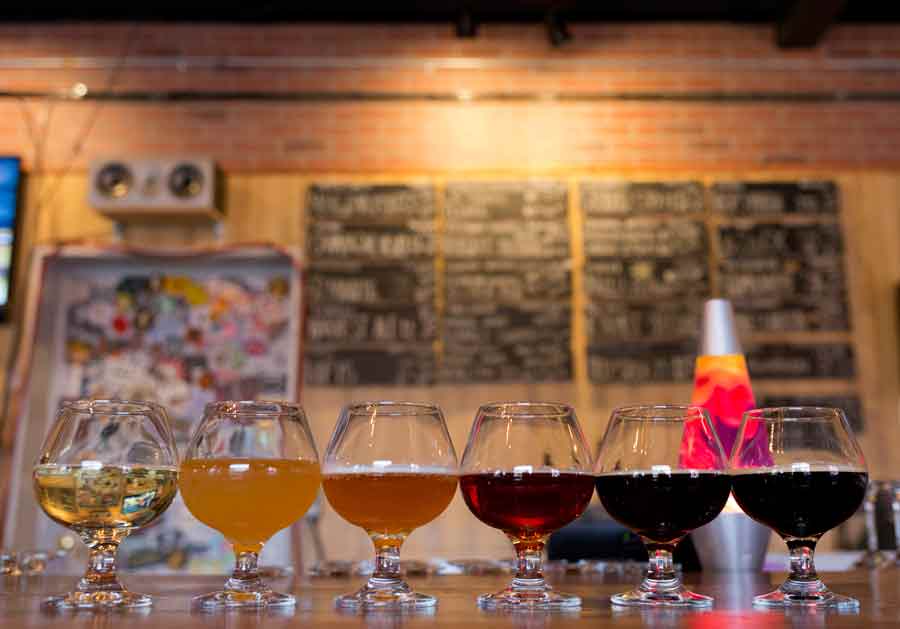 Beers from Pilsner to Stout with possibly a little cider thrown in, at Art of Beer in Highwood.
Photography by Joel Lerner/JWC Media

The pumpkin beers are the most popular of the approximately 10 autumn beer offerings. “The Harvest Beer by Founders can only come out in the fall, because they’re brewed with wet hops that are not yet dry,” said Hernandez. “As soon as they’re harvested within 24 hours they put them into the brew kettles, so that all of the oils and all of the properties get put into the beer.”

Hernandez explained that the beer is served in a brandy snifter to provide a better taste experience. “Anywhere from 40 to 70 percent of what we perceive as taste is actually from aroma,” he said. “Then it goes back to this is a work of art and we want people to experience it as it was intended by capturing the aromas of the beer.”

The Art of Beer sells a lot of gateway beers including wheat beers, pilsners, and lagers. “One of our phrases is ‘Education through Libation,’ so we always have a craft version of those beers. It makes the customers more curious by giving them some culture, expanding their palettes, as well as exposure to the other end of the spectrum to craft beers.” A craft beer is made in a traditional or non-mechanized way by a small brewery. For non-beer drinkers The Art of Beer offers a selection of wines and ciders.

Over the summer, The Art of Beer held taste tests to gather research and market data for a kitchen slated to open in 2017. Some of the menu items will include sliders, a meat and cheese plate, sausages, gourmet flatbreads, as well as organic and vegan options “that won’t completely fill you up, because beer is a filling libation,” said Hernandez, who is considering putting a smoker in the back for slow-cooked tacos and brisket. Chef Peter McCarthy is the taproom’s first choice, as he has “a great passion and feel for what would work with The Art of Beer presuming that he’ll still be available when the kitchen opens. We’ll still be a taproom first and not a restaurant, but we’ll add high tops for additional seating space.”

A kitchen is not the only indication that new business is brewing at The Art of Beer: “We’re right on the cusp of our pre-franchise expansion right now,” said Hernandez. “There’s a line of people who want to open up locations all over the country.” Two new suburban locations in Chicago will open in the near future. “People want to go where it’s convenient, because when alcohol is involved it’s easier and more responsible to go somewhere that you can walk to,” he added.

The Art of Beer hosted a fundraiser last summer supporting Heroes on the Water, which helps warriors and veterans relax, rehabilitate, and reintegrate through kayak fishing and the outdoors. “Our main mission is to make the world a better place one pour at a time by creating places of joy and also jobs of joy, so donating to charity is a big part of what we want to do,” said Hernandez. “Technically the tips at our summer fundraiser became donations” to Heroes on the Water and The Art of Beer plans to have more charity events.

The Art of Beer opened in July of 2013 next to the Gourmet Frog Bakery, 316 Green Bay Road. The taproom moved to 552 Sheridan Road on October 16, 2015, and added a curbside patio in July 2016 that brought the rustic indoor motif outdoors. “Being on the corner near a light at such a busy intersection has increased our exposure quite a bit,” said Hernandez.

Hernandez grew up on the South Side of Chicago and moved to Highwood shortly after opening The Art of Beer. “It’s allowed me to learn more about the community that we started in and to become more ingrained with the aldermen, the mayor and the citizens and I’m proud to call this place my home,” he said. “I really love Highwood, and though it’s outside of the city it still feels like the city.” 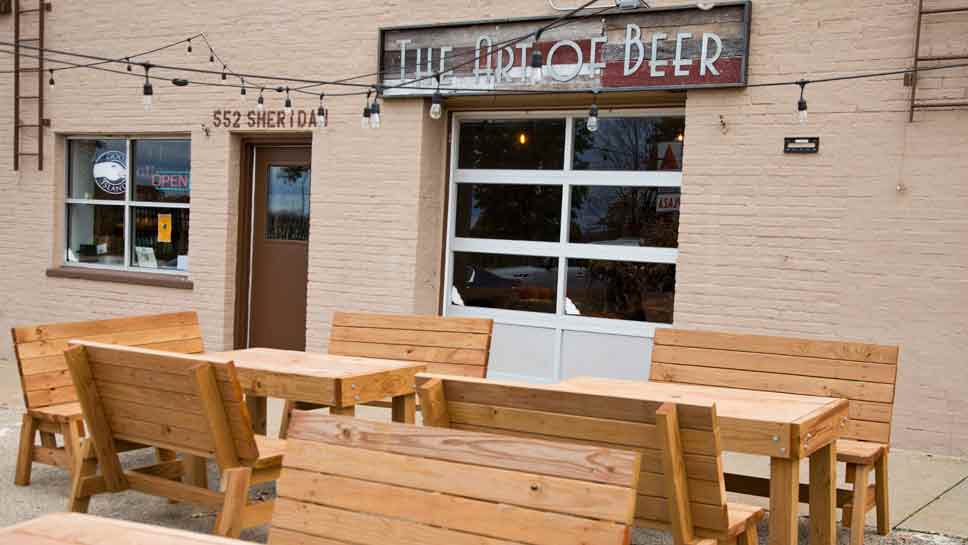 The outdoor beer garden at Art of Beer in Highwood.
Photography by Joel Lerner/JWC Media 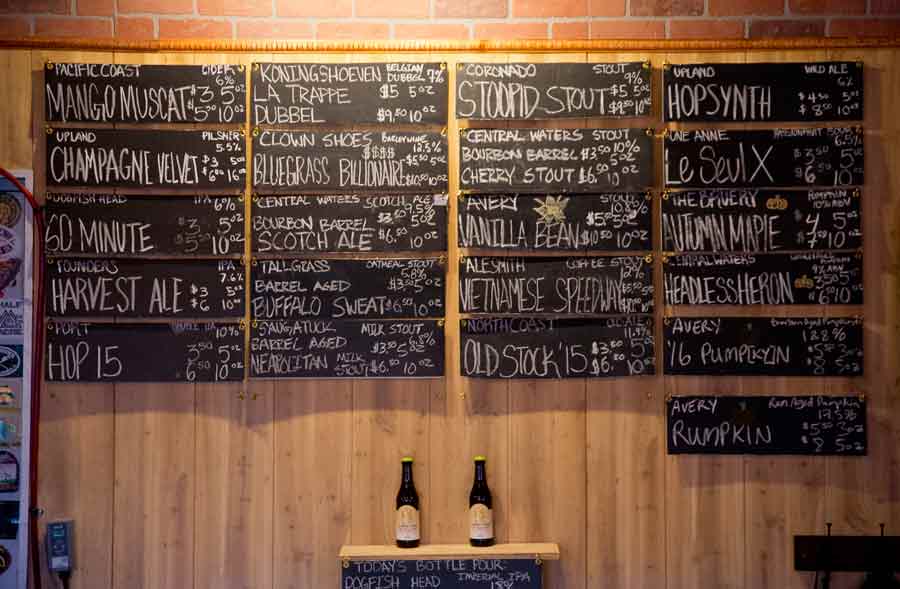 The current list of beers on tap at Art of Beer in Highwood.
Photography by Joel Lerner/JWC Media 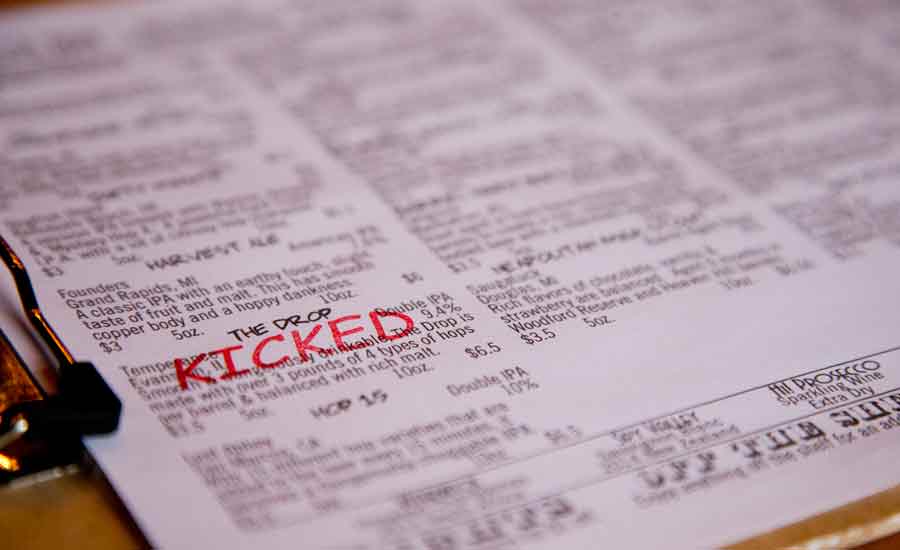 When they run out of a beer at Art of Beer in Highwood, it gets kicked off the menu.
Photography by Joel Lerner/JWC Media 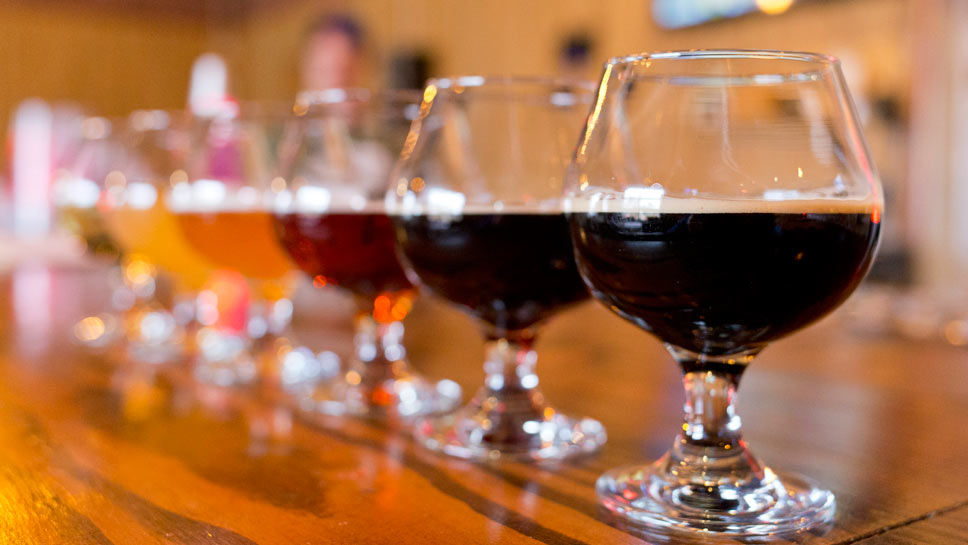