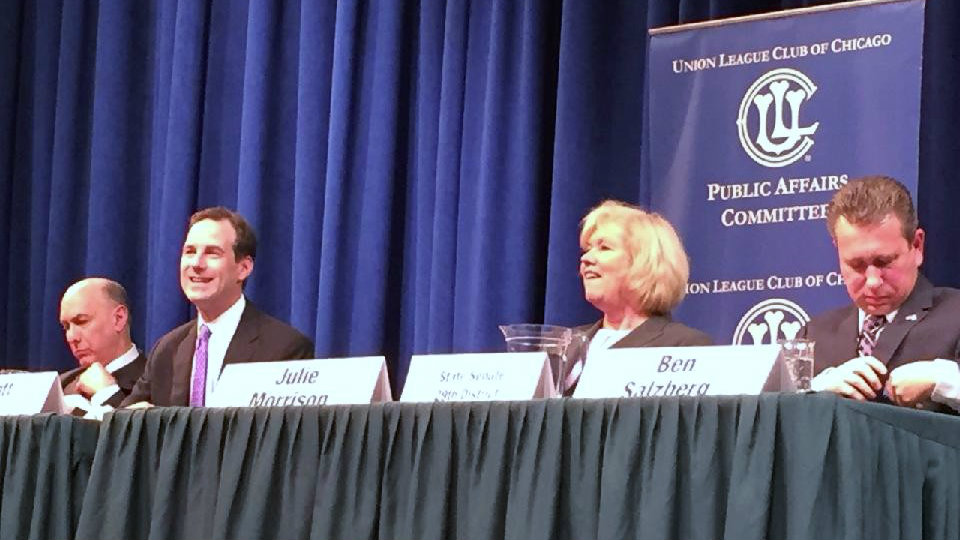 Illinois State Senate candidates Benjamin Salzberg (right) and state Sen. Julie Morrison (D-Deerfield) (second from right) debate last month in Lake Forest. With them are (from left) Highland Park attorney Marty Blumenthal and state Rep. Scott Drury (D-Highwood). Drury and Blumenthal are running against each other. Photo courtesy of Happie Datt and the League of Women Voters of Lake Forest and Lake Bluff.

State Sen. Julie Morrison (D-Deerfield) has carved out a niche for herself in Springfield since she was elected in 2012.

Morrison’s opponent in the November 8 general election, Oakton Community College Trustee Benjamin Salzberg of Northbrook, hopes to do the same if he wins the seat, but it will be a different specialty.

Salzberg, a business consultant who calls himself a problem solver, wants to put his professional expertise to work in the Illinois General Assembly. He said he can work across party lines if people are serious about solving problems.

“I’m a business transformation specialist,” said Salzberg. “I go into a company which is going the wrong way and turn it around.”

Morrison, who has left issues such as the state budget and pension reform to others, has focussed on special needs children and water safety. She said she has worked across party lines and has gotten 56 bills passed.

“I’ve shown my independence,” said Morrison. “When 25 of your bills have been signed by a Republican governor and 31 by a Democratic governor you know you have support from both parties.”

One of the things Morrison said makes her most proud is forming the Special Needs Caucus, which has both Democrats and Republicans among its 60 members. She said the caucus looks for ways to help the most vulnerable of the state’s youngsters.

“We are focusing on the families in the special needs community,” said Morrison. “If we can do something for one of those children we can change the trajectory of the life he or she will live.”

The one time Morrison tried to do something to end the state’s stalemate over the budget—which will become an issue again shortly after the election—she said her practical solution got nowhere. She introduced a bill a year ago requiring the governor to meet weekly with the leaders of the legislature until a budget agreement is reached.

“It was buried in committee,” said Morrison. “If you’re going to solve these problems you have to be in the room together.”

While Morrison was unable to get any traction forcing Governor Bruce Rauner to sit down with the leaders of the State Senate and State House of Representatives, Salzberg said he can come up with solutions. He also said they will go nowhere unless people are serious about solving them.

“I will talk to them like I talk to CEOs and CFOs,” said Salzberg of Rauner and Illinois House Speaker Michael Madigan (D-Chicago). “I will ask the right questions to solve the root cause. Hopefully they will want to help people. If they have no desire to help you can’t change them. Then they’re just stubborn.”

Salzberg has some definite ideas about how to deal with the state’s budget crisis. He said he will apply the same principals he uses to help businesses return to a steady condition.

“We have to stop the hemorrhaging so we don’t see companies fly out of here,” said Salzberg. “We have to cut our expenses. Illinois is not pro business and is not competitive. We’ve got to stop this crazy spending.”

When it comes to pensions, Salzberg said it is a long-term process. He said he recognizes the defined benefit plan that current state employees receive is protected by the state constitution. He wants to see new employees receive benefits more akin to the private sector like a 401k.

An engineer by trade, Salzberg said he earned his undergraduate degree in mechanical engineering from the University of Illinois before getting an MBA from the Illinois Institute of Technology. He also has a masters in teaching from National Louis University.

Growing up 45 minutes from Springfield in Beardstown before getting her degree from Knox College in Galesburg, Morrison said she has firsthand knowledge of the motivations of people in both southern Illinois and the Chicago area. She said it helps her craft legislation which can pass.

Before she was elected to the senate, Morrison spent four terms as the West Deerfield Township supervisor.

The 29th State Senate District includes all of Lake Bluff, Lake Forest, Highland Park, Highwood and Deerfield as well as parts of Glencoe, Northbrook and Glenview.