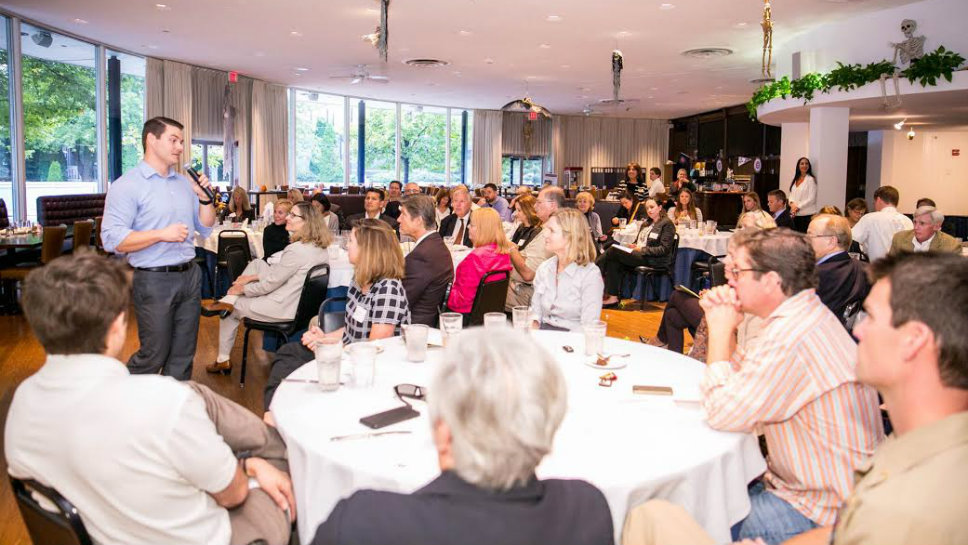 LAKE FOREST/LAKE BLUFF — Members of the business community in Lake Forest and Lake Bluff got a firsthand look at Navy SEAL strategies from Justin Walker, a former teacher of SEALs, at a meeting of the Lake Forest Lake Bluff Chamber of Commerce October 12 in Lake Forest.

Walker, a Highland Park resident who is now the managing partner of Permanent Solutions Training in Lake Forest, said the success of SEAL and Special Warfare Combat Crewmen (SWCC) missions is dependent on skills valuable to commerce as well.

“It’s all about developing leadership and inspiring success,” said Walker. “It’s about team development and collaboration. You need awareness and empathy. If you care about the person next to you that is a strong driver and motivator.”

One thing Walker talked about was the SWCC training he did while he was stationed at Naval Station Great Lakes. As part of SWCC, he had to teach people to be prepared for nearly anything that can happen during war.

“SWCC goes in there and gets people out of really bad situations,” Walker said without giving details. “This is about how you perform in a brotherhood and the performance of everyone as a team.”

Phil Doetsch, a financial services advisor at Morgan Stanley in Lake Forest, said thinking about the things Walker said will help him deal with some of the harder parts of his job. His stress is a lot different.

“I’m building a book of business and have to deal with a lot of adversity, a lot of rejection,” said Doetsch. “You have to be mentally tough. When I see what Navy SEALs go through it really puts things in perspective.”

Another thing Walker said he stresses when he is working with groups in a business or individuals of all ages it not only how decisions affect the person making them but others around them.

Walker said people always want to know if a task is possible, whether they can do it and what benefit they will derive. He said there is a fourth question which should be asked before making any decision.

“You have to ask what’s in it for other people,” said Walker. “When you take that into account you are going to perform better.” He said it is true in business, in one’s personal life as well as for members of the military’s Special Forces in combat.

Andi Brown-Phelps, the owner of Cross Fit Lake Forest, said she is embracing Walker’s message about the impact her decisions have on others. Whether she is helping a person train or dealing with employees, she said teamwork now has a new meaning.

“I’m going to turn to people I work with and ask what can I do for you,” said Brown-Phelps. “I have my own business and I’m going to make that part of it.”

Walker said incorporating the training methods he both received and taught can go beyond the business world. He coaches people into making it part of their lifestyle.

“You have to incorporate these concepts into every aspect of your life,” said Walker. “You do it when you are at home with your family and when you are at work and then when you come home again to your family. It will give you a healthier lifestyle. You’ll be really inspiring to people by being an example in all situations.” 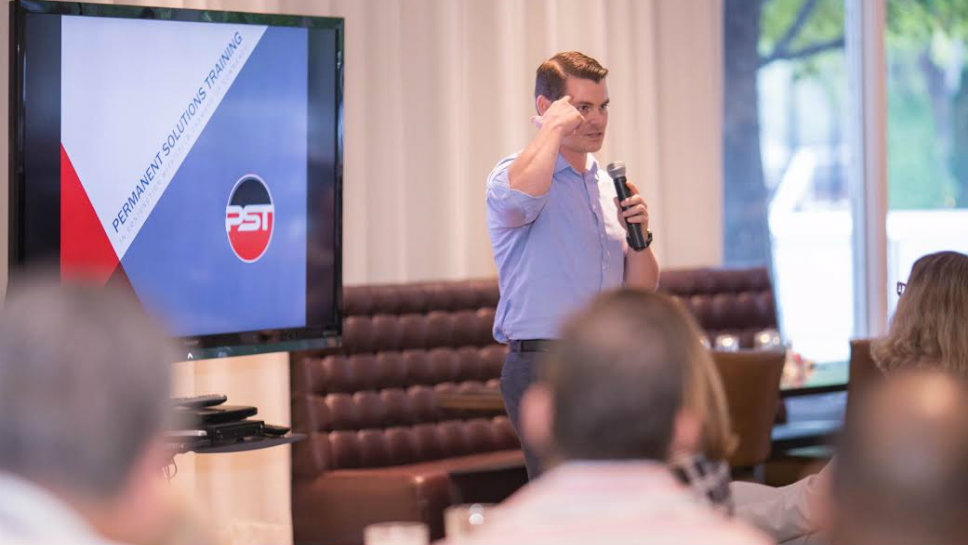 Walker makes a point with the group. Photo courtesy of Gregory Rothstein.